To thoroughly enjoy the glory that is season seven of Kitchen Nightmares with Gordon Ramsay, please welcome Alison Leiby, who will be here every week to take us through the season. This past Friday Fox aired a special double-header: Part one was a revisit to Amy's Baking Company and part two was set in Pantaleone's in Denver. 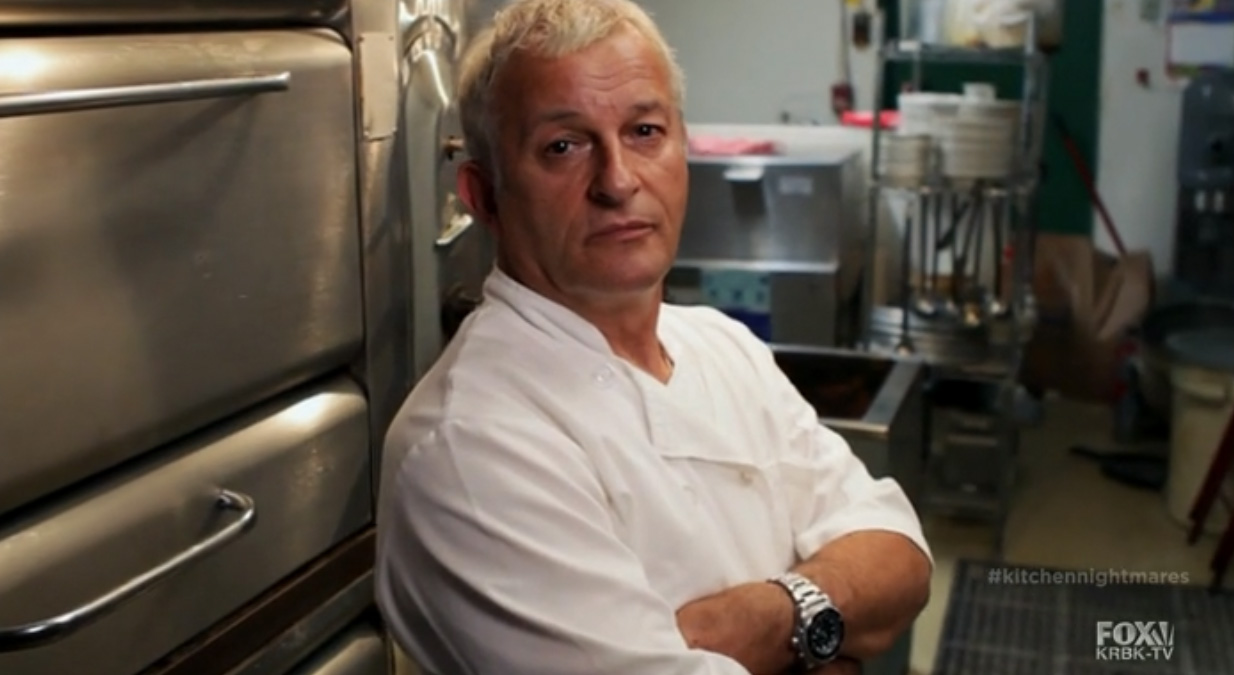 If there's one thing we know about people on reality television, it's that they think they are the best. The best fashion designer (Project Runway), the best singer (American Idol), the best trophy wife turned handbag designers/cookbook "author" (every other show). So it's no surprise that on this week's Kitchen Nightmares, Gordon Ramsay visits a restaurant owner who thinks he's the best. Meet Pete Panteleone, owner of Pantaleone's in Denver, home of the "Best Pizza in Denver" (at least according to one person in 1991).

Pete and his wife Paulette have owned their pizza restaurant since 1985, which opened to wonderful reviews and local awards. That was almost thirty years ago, and now customers — as well as most of the staff — almost universally agree that the food is terrible. Pete has been coasting on the early praise, but the restaurant is slowly declining. I mean, I get it. My second grade teacher told me I was the smartest kid in class and I basically haven't tried since.

Ramsay shows up to the restaurant to meet the owners and see what's really going on with the food. He greets Pete, and after some brief pizza chat he asks, "Where in Italy are you from?" Pete answers, "I'm not Italian, I'm Greek!" and we're off to a racially-charged start. 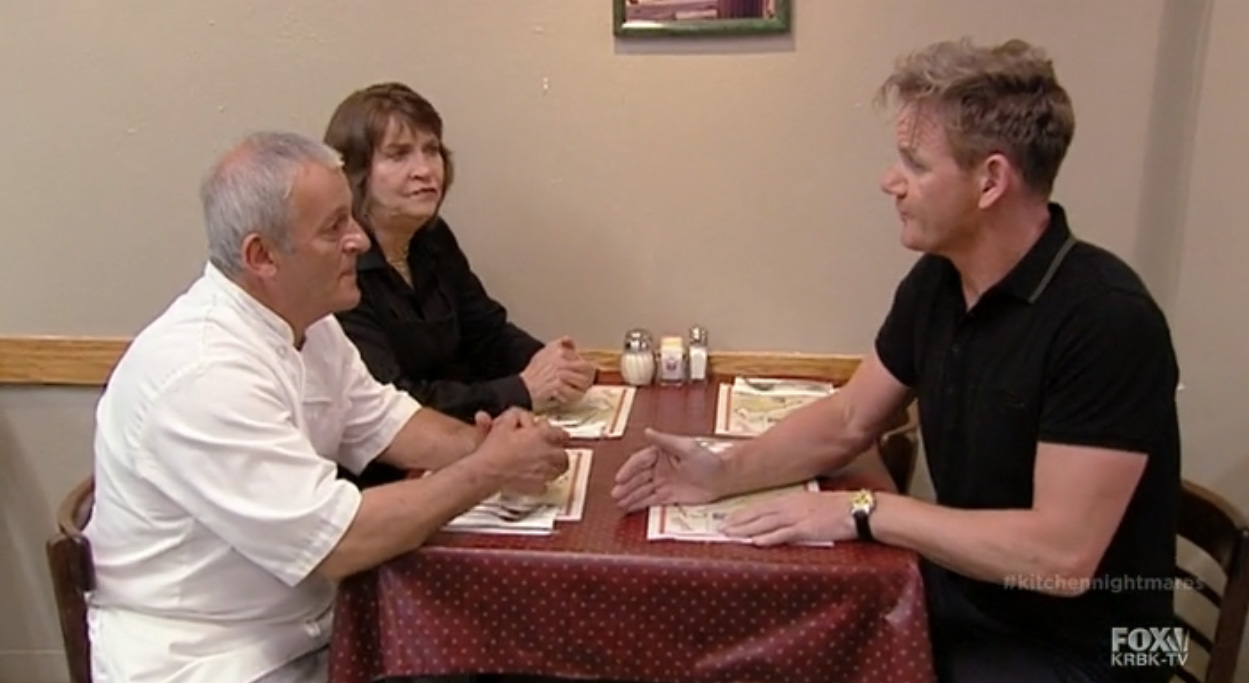 The owners explain the current state of the business to Ramsay, specifically what times the business is closed. Pete doesn't work on Sundays because he likes to watch football. Oh is that how business works? Well, I like to eat brunch and get hammered when it's still light out, but if I didn't work every time that was an option I'm pretty sure no one would hire me. Pete also takes a siesta every afternoon. That's right, he has nap time. He gets tired during the day. And then takes a nap instead of staying awake and working like an adult. If it wasn't such a terrible business plan I'd want to live it myself.

Once Ramsay has met the owners, learned about the business, and come to understand their daytime sleep schedules, he sits down for lunch to try the food and this alleged "best pizza in Denver." He orders a sausage pizza, a meatball hero, a pizza calzone, and linguini with clams. Waiting for his food he glances around and notes that the dining room has the atmosphere of a hospital, which is pretty accurate. 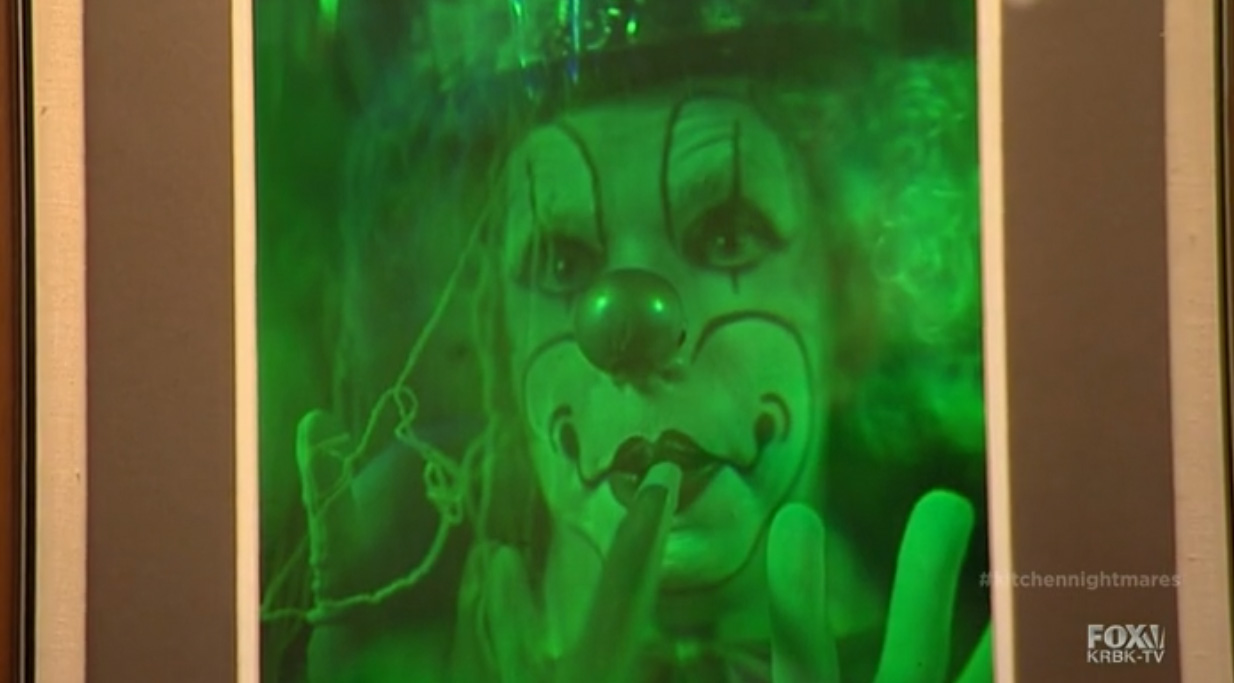 The room is mostly what you'd expect of a not great pizza restaurant: dated colors, wood paneling, cheap tablecloths and place settings. There is one special point in the room though that Ramsay can't stop staring at. It's a framed image (I can't say photo and I can't say painting because it's neither of those) of a neon green hologram of a clown. I have to imagine that they hired a meth head in the middle of a fever dream to decorate and were just like, "Here's $10, see what's at Spencer's Gifts. Also try and stick to our design theme of 'terror.'"

As upsetting as the 3D nightmare Mona Lisa that is the clown hologram is, what truly horrifies Ramsay is the food. Before Ramsay's food comes, he asks a fellow patron how their sandwich is. The patron replies that it tastes like cat food. He then joked about how he knew what cat food tasted like, implying he obviously did not, but his facial hair choices really said otherwise to me. 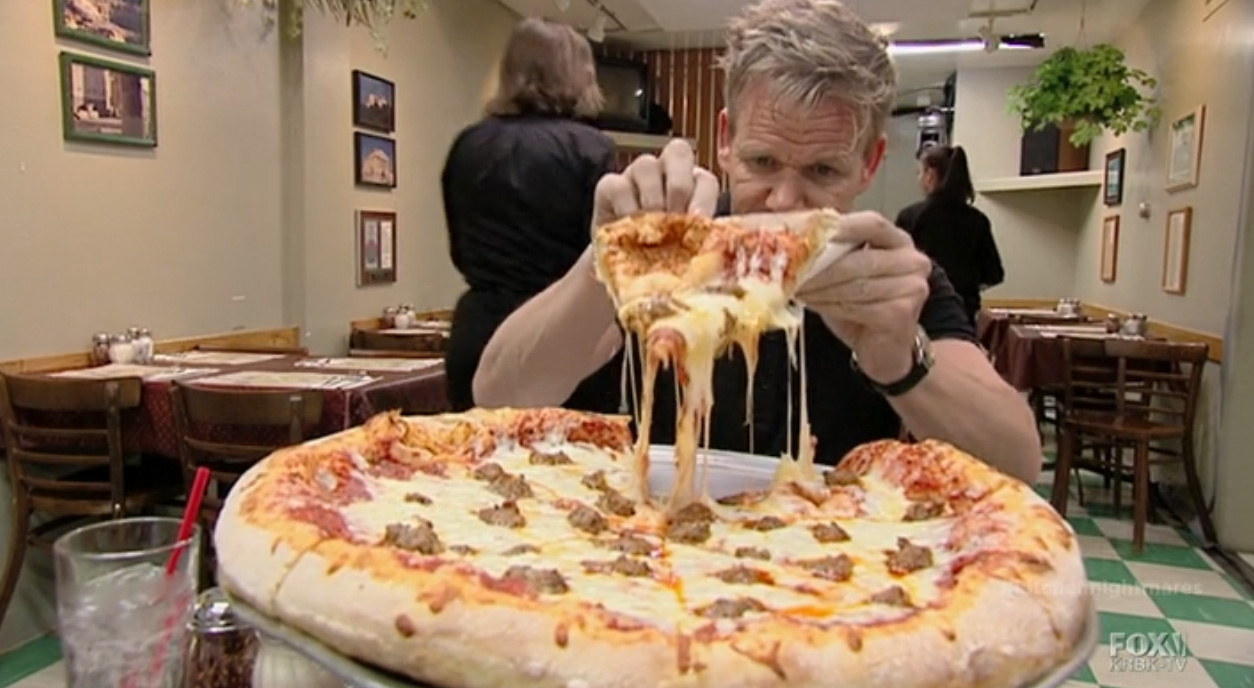 The calzone arrives and looks like a band aid colored football. It's big enough for easily four people, and when Ramsay cuts into it, it's overstuffed and with the center ingredients still cold. His sausage pizza isn't much better. The waitress brings out a comically large pizza resembling a truck tire in both size and probably weight. Ramsay's comment that the crust is like a baguette is answered with, "This is our thin crust." He describes the meatball sub as a "diaper full of meatballs" which made me nauseous enough to put down my Diet Coke (a rare feat!). 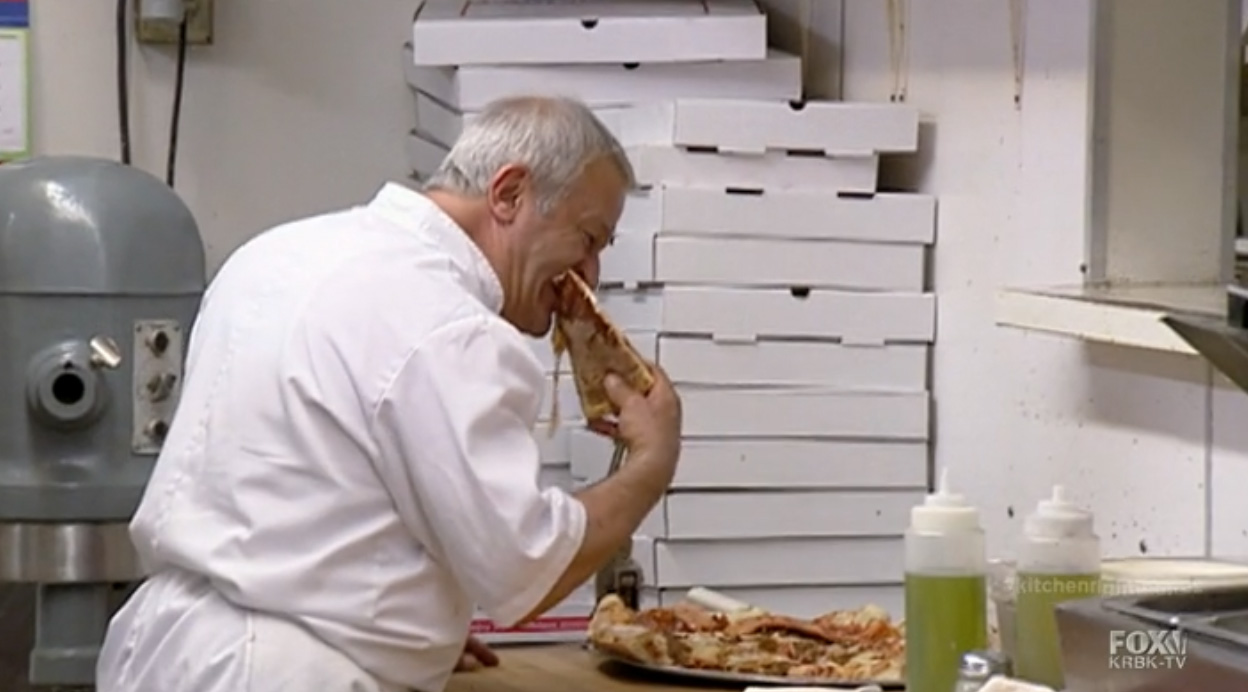 Ramsay sends the pizza back with his complaint about it being too big, too bready, too heavy, and too greasy. Pete sees no problem and believes he still has the best pizza in the city. He proves it by eating the pizza Ramsay pulled apart and sent back. 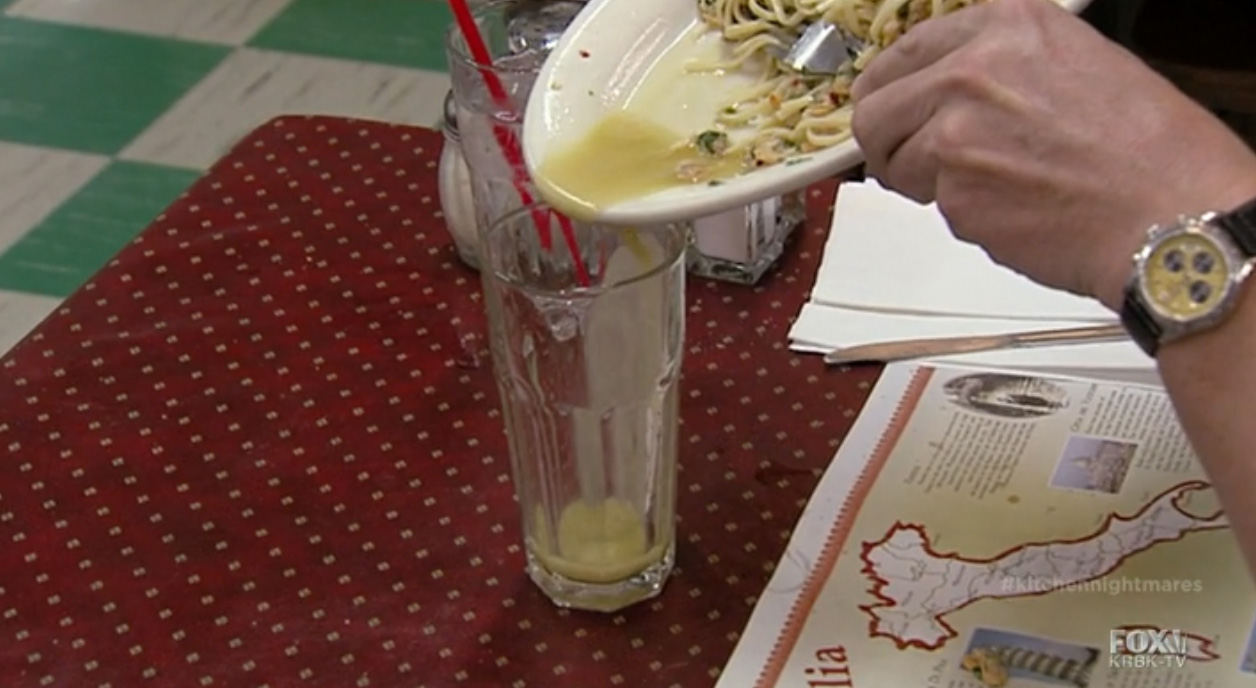 The final dish is the linguini with clams. Pete prepared this dish by emptying canned clams on some oily pasta. It's almost enough to turn me off to the dish as a concept, except that carbs and seafood are basically my next of kin at least in terms of things I care about in this world. Obviously, Ramsay knows from looking at the dish that it's terrible, and then proceeds to empty the water/oil/butter/clam juice mixture that was pooling at the bottom of his plate into a water glass. It looked like the world's most terrifying urine sample.

Following his hellacious meal, Ramsay gathers the staff to tell them his thoughts. Pete, like basically anyone who voluntarily goes on a reality show, cannot handle the criticism and disagrees with basically every one of Ramsay's negative comments, even if they are undeniably true. 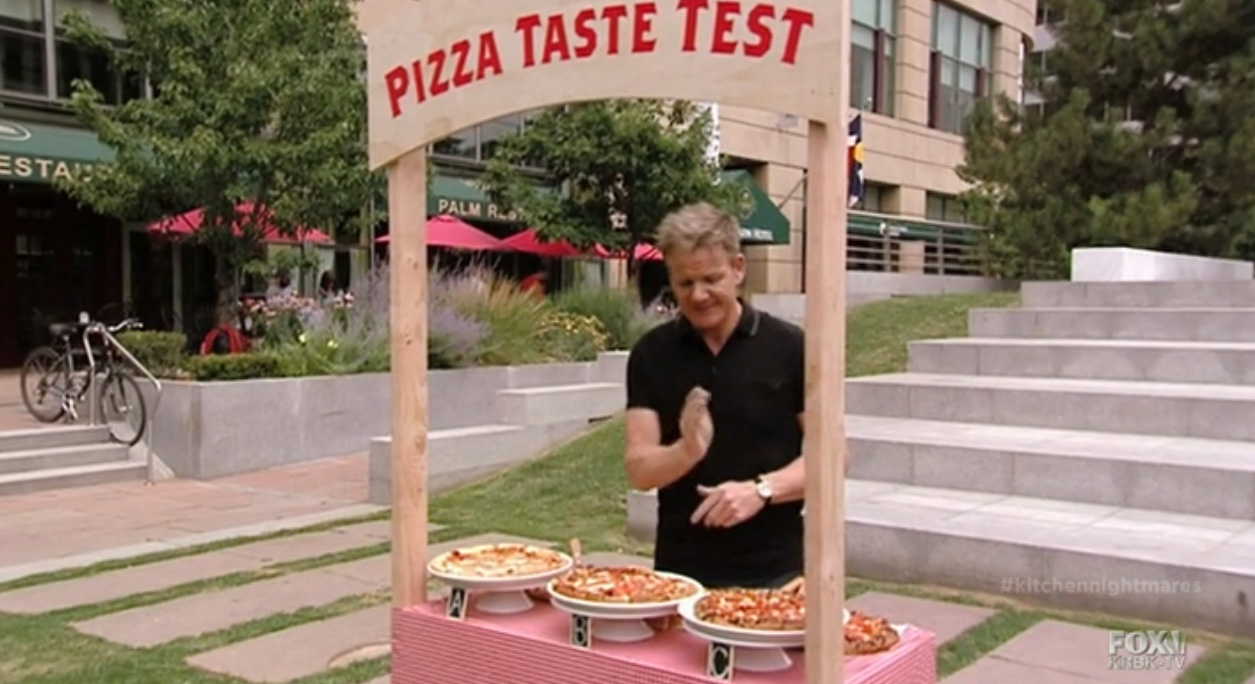 Sine Pete just isn't getting the fact that his pizza is terrible, Ramsy sets up a taste test in Denver to see what other people think of it. He has three blind pizza options: one from the best restaurant in Denver, one from Panteleone's, and one is a frozen, store-bought pizza. Of all of the customers surveyed, only 10% preferred Pete's pizza. 15% preferred the frozen pizza, which makes sense that it's a bit of a crowd pleaser since Colorado legalized marijuana. Following this harsh reality, Ramsay asked Pete if he would change. Pete said no. I mean, why change when 90% of the public doesn't like you? It works for Kim Kardashian. 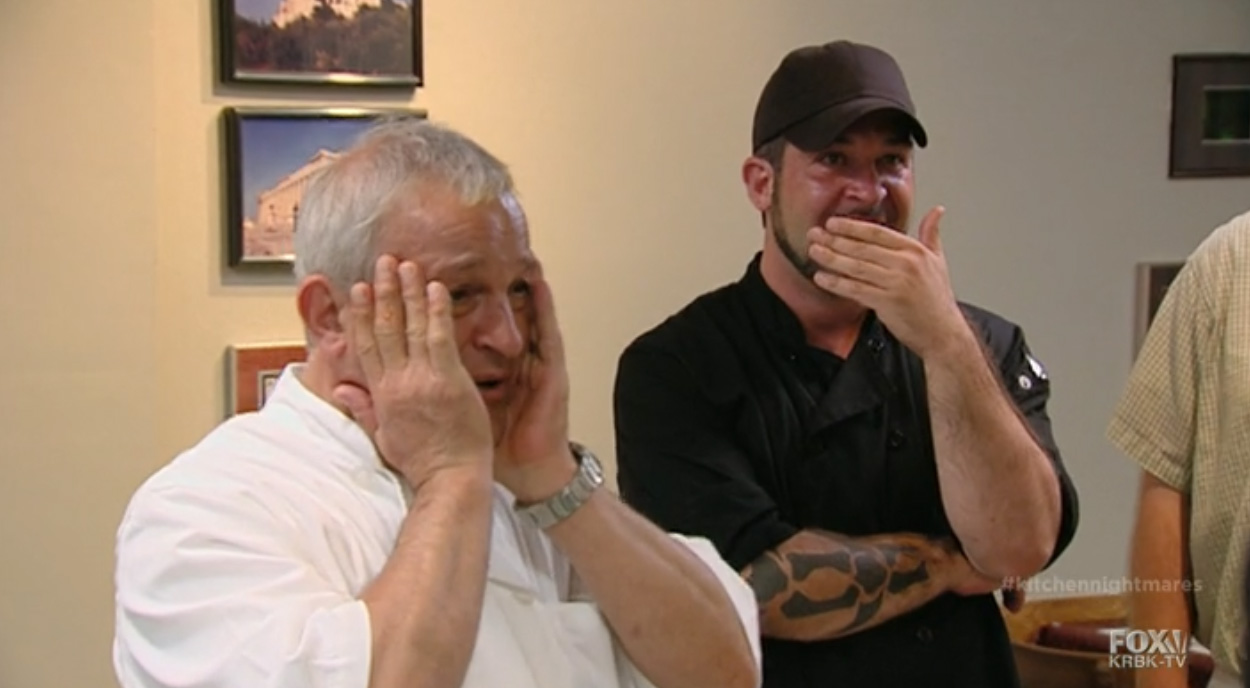 Because Pete employs his son and grandson at the restaurant, Ramsay brings up Rao's, the acclaimed Italian restaurant that has been a family business for over one hundred years. He wants Pete and his son to mend their relationship for the good of the business, and to do so he brings them to Rao's Las Vegas via the Caesar's Palace private jet. Pete and his son flip out like they've never been on a private plane before. I mean, you'd think the man behind the best pizza in Denver would be accustomed to such luxuries.

They have a terrific meal at Rao's and Pete and his son Josh basically bury years of disagreement and stress underneath perfectly cooked pork and the world's best red sauce. Because that's all it takes to repair a broken family business, one meal. 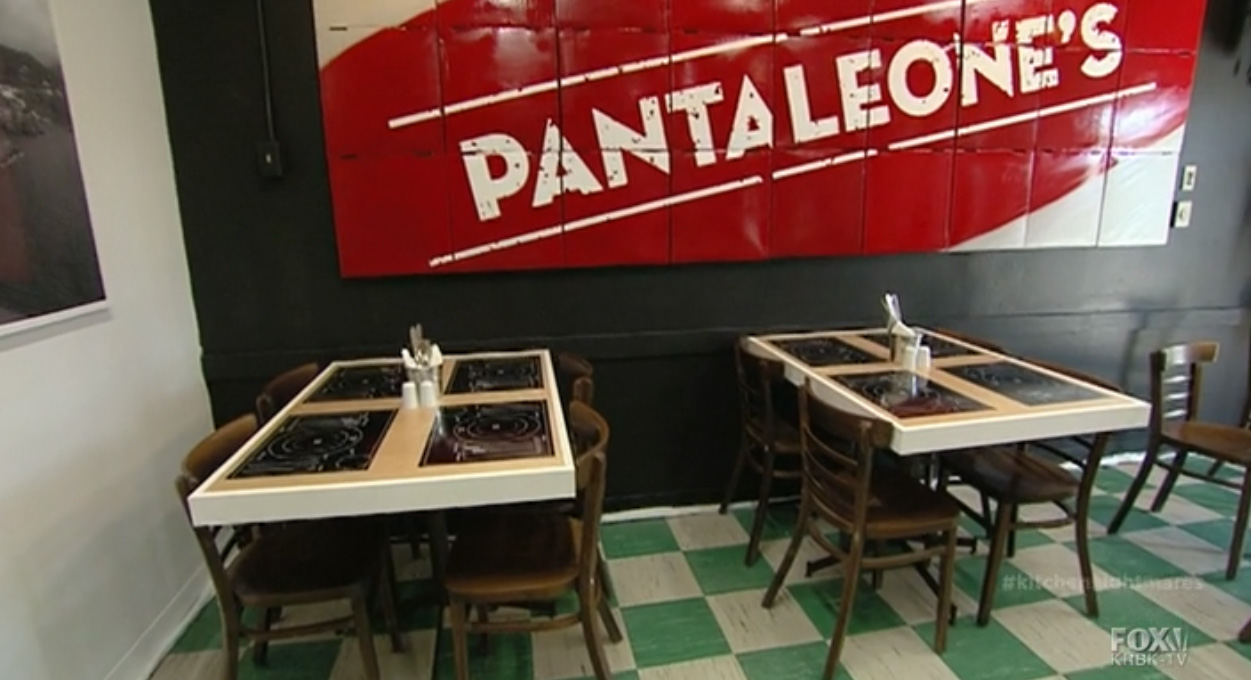 Before Panteleone's can deliver on their best pizza claim, Ramsay and his team give the interior a makeover. He brings in Pete, Paulette, Josh, and the rest of the staff to unveil the new restaurant. Gone is the wood paneling and the vinyl tablecloths. And the clown hologram that has haunted my thoughts for the entire episode and likely for the rest of my life every time I close my eyes? It's gone and has been replaced by pictures of Italy!

He also gives them a van so they can now make deliveries, since until now they were a pizza place that did not deliver, which is kind of like being a gym with no equipment. It's the crux of the business. The van was donated from 1-800-CHARITY-CARS according to Ramsay, which feels super fake. That isn't even the right number of digits for a phone number. It sounds like the kind of charity you make up when you're filing your taxes at the end of the year and need to deduct something or else you'll owe the government all of your money normally reserved for buying cases of wine and sheet cakes (just me?). 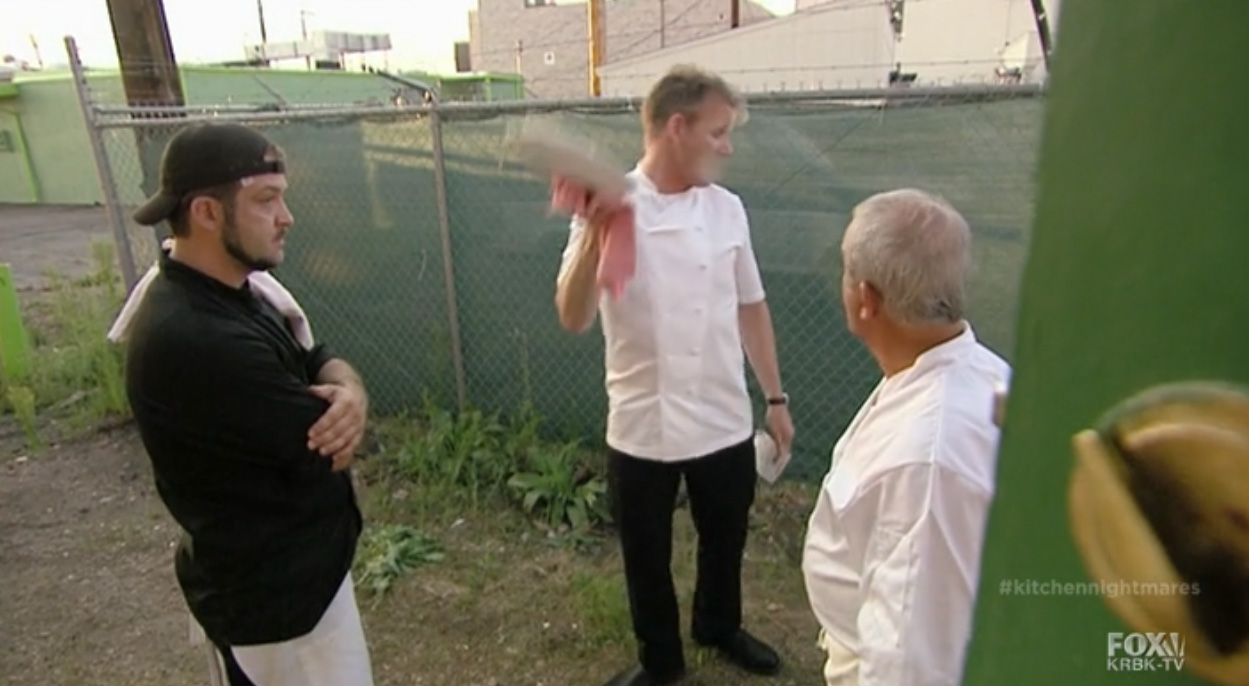 With the new interior, and a new modern menu, Panteleone's opens as basically a new restaurant. A few tense moments in the kitchen lead to Ramsay bringing Pete and Josh outside to give them a "pep talk" which included smashing a plate of pasta on the ground. I give myself pep talks sometimes. Like every day before leaving the house I stand in front of my mirror and say, "Just try not to threaten to set anyone on fire today you idiot!" while holding up different chambray shirts to see which one feels right.

Anyway, his pep talk worked and the rest of the evening lived up to Ramsay's new standards. It looks like Panteleone's is on it's way to once again being "The Best Pizza In Denver." It's been a long journey for them. But me? Yeah I'm still the undisputed smartest person, 1992 - present.