Another year of the Pebble Beach Food & Wine Festival passed this weekend in Pebble Beach, California. But, before we turn the page on the 2014 edition, here are some final thoughts on the weekend that was from Eater LA associate editor Matthew Kang:

2) Paul Liebrandt dazzled diners at the Opening Night Reception with perhaps the most underwhelming dish ever: a parmesan crisp. Dusted with acidic tomato powder, diners were treated to something between a beam or scowl depending on how much they appreciated the rather tasty cracker.

3) Charles Phan gets really red and jolly when he starts drinking.

4) Nancy Silverton was actually seen without any of her signature shades, this time spooning honey from a massive comb over one of the best dishes of the weekend: burricotta over an oat cookie topped with honey, rosemary and candied walnut.

5) Jonathon Sawyer of The Greenhouse Tavern in Cleveland might have had the best showing of the weekend, presenting a scallop crude in a lovely shell. When asked if he had enough shells for the night, Sawyer, who was wildly brandishing his olive oil bottle, said there were plenty of them. Sawyer also said he was coming down to L.A. next week for an exclusive dinner with Nancy Silverton for an unnamed Hollywood celebrity. Fancy.

6) Matt Accarrino (SPQR) on whether getting a Michelin Star was better, or the recently awarded Best New Chef by Food & Wine: "They're both a part of affirming a chef's work."

7) Early the next morning, a sleepy and hungover crowd watched Donatella Arpaia do a cooking demo of ricotta gnudi. The presenter slipped that Arpaia is in the process of opening a restaurant in Florida. Not Miami, but somewhere in Florida. Best product placement of the morning? Fake receiving a FedEx package of an "essential ingredient" she needed for her meatball dish the following day.

8) This year's tribute for Charlie Trotter was a bit of an emotional roller coaster, with chefs like David Lefevre recalling fond memories of the late Chicago chef to an uplifting video featuring Eric Ripert and Daniel Boulud. However, things got to tear-jerker mode when Rochelle Trotter went off for twenty minutes, like a preacher giving a eulogy, about the influential chef's life. Said Rochelle Trotter: "he was the epitome of graciousness. I was the daughter of a preacher, but Charles was the only one who brought me to my knees."

9) Michael Rotondo of Parallel 37 resounded a common Charlie Trotter saying: "You gotta eat while I talk." Many chefs around the room repeated the saying around the room.

10) Michelle Gayer of Salty Tart gave another anecdote about Charlie Trotter. Just before a busy night Trotter shouted to Gayer: "Did you hear that?" Barely able to hear from the pastry part of the kitchen, Gayer shrugged. Trotter: "It's a shitstorm coming your way!"

12) Guy Fieri was mixing up a lettuce storm at his booth, which created the longest line at the Grand Tasting. Later, at the Cosmopolitan Happy Hour, Fieri was keen on picking up the last batch of Joe's stone crab claws, much to the dismay of those standing in line to pick up a plate of the precious shellfish.

13) Tyler Florence tried to break the rules of the kitchen by "baking" an instant dough made in a carbon dioxide canister on a griddle.

14) Robert Irvine was shaking things up at the Grand Tasting by pouring eight ounce pours of his wine to attendees.

15) No one owned it as much as this flip-flop wearing fan of Guy Fieri: 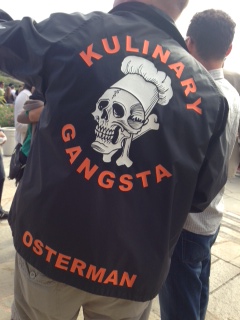