April Fools' Day Pranks From Across the Food World

Share All sharing options for: April Fools' Day Pranks From Across the Food World

April Fools' Day is here and the internet is filled with jokes aplenty. The tricksters in the food and restaurant have been getting in on the action with grocery delivery service offering eagle-caught salmon and a Michelin-starred chef announcing a high end dining option for dogs. Below Eater has rounded up the best food and restaurant pranks out there, and will be updating this list regularly. See something out there worthy of the roundup? Link to it in the comments. And please, be careful.

Writer Michael Krikorian "reports" that following this month's All-Star Chef Classic in LA, San Francisco chef Dominique Crenn fled the LAPD for her native France. The charges? "She 'assaulted a fish,' according to law enforcement sources and several eyewitnesses."

The jokers at grocery delivery service FreshDirect are running a promotion for "eagle-caught salmon": "Sustainably harvested in the wilds of upstate New York," the salmon is captured by company-sponsored eagles in the wild that are "tied with green and orange ribbons for tracking as well as a bit of flair." A FreshDirect rep tells the New York Times last year's prank bluenana (a fake blueberry and banana highbrid) was a hit with customers.

Great British Chefs announces England's first-ever "doggie diner" which will serve "high-end, canine-friendly dishes like Textures of Tripe with Onion Puree, Crispy Pig's ears with Truffle Tartare Sauce and Pork Jus Jelly with apple sauce and Shortbread 'dog biscuits'." Michelin-starred chef Josh Eggleton ( Pony and Trap) is behind the brand new Winslow's of Bristol and says: "I've been working round the clock with my team of chefs to come up with a menu that is modern but remains true to canine tastes." For those hoping this was real, do check out the very actual pet deli in Germany.

Stand aside Glassholes, Yelp has invented the Yelpulus Rift. Using technologies "previously only found on international space station," Yelpulus Rift offers users the chance to wear a helmut attached to a tablet that dangles in front of the face and offers "a virtual reality experience." Says Yelp CEO Jeremy Stoppelman: "It doesn't happen very often that you encounter a new technology that dramatically changes the way you experience the world around you. Not since the first creatures crawled out of the ocean has our species made such a leap forward."

Midtown Lunch's Zach Brooks has declared that this week is "Salad Week 2014." Per Instagram: "Every day this wk I'm going to eat a salad and post about it." Brace for greens.

The Braiser has turned itself into The Ramp. They now are posting links to articles about ramps. Get it?

Forget the cat cafe trend sweeping the nation, says Bon Appetit. The magazine has discovered Brooklyn's first rat cafe called Rat King. Says the owner: "What we're offering here at the Rat King is the most authentic New York experience you could possibly have: a $10 cappuccino, the New York Times, and a big, cuddly rat gnawing on the cruller on your table."

Food52 has launched a sweepstakes to give one lucky winner a Spring break trip to New York City to see how Food52 runs the business (counting pennies), how they work (crowded around a single table), their view from the office (a brick wall), and how they go urban foraging (shopping at the greenmarket). Watch the video above for more.

Daniel Delaney's acclaimed NYC barbecue restaurant BrisketTown has transformed itself into TofuTown. Per the website description: "Tofutown is our Brooklyn-based house of alternate proteins. Each night we serve up heaps of hemp, castles of quinoa, and tons of tempeh."

Blogger John Sconzo announced that he's giving up his career in medicine to "open a new cocktail bar."

Texas chain Torchy's Tacos has unveiled sinfully smooth tacos, "a series of combinations from some of our most staple items on the menu – all freshly whipped and available in a compostable 18oz. cup."

The Das Can-in-Stein is a new product for sale on ThinkGeek that "makes it look like you're drinking from a pewter tankard."

Eater DC is keeping a tally of the various restaurant pranks in DC's food and restaurant community. Highlights: The Runcible Spoon printed magazine announces they're going digital and chef Geoff Tracy (Chef Geoff's) says his next restaurant will be "Franc E. Fromage, a french-inspired mecca for the whole fam!"

Atlanta Magazine reports that chef Ford Fry has signed on to be personal chef to pr-stunted pop star Justin Bieber for the next three months. Says Fry: "The first time I cooked for [Bieber] and his friends, it turned into a jam session."

Behold the Mighty Mouth Expander, KFC Australia's new device that makes mouths bigger. After many experiments documented in the video below, KFC has created a way to make the human mouth large enough to enjoy their limited time only Mighty Burger (which is about half an inch too big for the average mouth).

Domino's UK has invented the Edibox, a new pizza box that's made out of crust. Per the announcement: "With every future Domino's delivery, you'll see the Edibox upgrade option: double the dough to enjoy alongside double the glorious garlic and herb dip."

A press release announces the debut of Captain Morgan Taco Rum, "crafted by mixing the Caribbean's finest white rum with Mexico's freshest blends of cheddar, jack and Chihuahua cheeses, along with green chilies, perfectly diced tomatoes and succulent beef." There's even a suggested cocktail, the taco-tini, which is "served in a shredded cheese rimmed glass" and "looks to overtake the popularity of margaritas this summer."

Beloved spread Vegemite announces the release of Vegemite iDRINK 2.1 energy drink, a swap for a breakfast of Vegemite on toast. The company didn't keep up the joke for long, eventually telling its horrified customers that it was all in good fun.

Scratch and Sniff Menus at Houlihan's

In the Instagram video above, Houlihan's unveils a scratch and sniff menu. It's bacon-y.

Here is a trailer for Edzo Dreams of Cheeseburgers, a documentary by Michael Gebert's Sky Full of Bacon in the spirit of Jiro Dreams of Sushi and El Bulli: Cooking in Progress. It chronicles Eddie "Edzo" Lakin of Chicago's Edzo's Burger Shop and, per Sky Full of Bacon, the film shows how "seeking perfection can become a kind of spiritual quest."

The Mirror reports that a British farmer has successfully bred six-legged lambs, which he hopes will "help to significantly reduce the cost of meat for consumers." The farmer adds: "Their six legs have made them fitter and leaner and we expect their meat to be extra succulent."

On Netflix, viewers can watch 73 minutes of a chicken roasting and 20 minutes of bacon sizzling, both happening in reverse. Like Yule Log for food, the videos are actually being watched and even reviewed. Says one reviewer of Rotisserie Chicken: "The next gold standard of films. Nothing will come close to this masterpiece for a long time. 10/10. Would watch again."

Jim Cook, the brewer and founder of Samuel Adams, introduces a "radical and extreme new beer that leverages the wonderful properties of helium." It's called HeliYUM and has a lighter mouthfeel.

Eataly reveals that its next location will be in outer space. The idea is to "bring the highest quality Eatalian experience to Italy's astronauts" and offerings will include a dehydrated version of the famous Italian beverage Lurisia Gazzosa. Apparently there will be a livechat with Eatalian astronauts.

Eater Austin is keeping track of pranks happening in Austin's food and restaurant community. Highlights: Black's Barbecue claims they have lost the recipe for their famous sausages and restaurant/soup delivery service The Soup Peddler is now offering "Civic Growth Therapy Services," an attempt to "diversify."

San Francisco Cooking School is charging $225 for a sold-out class in toast making led by instructor Chris P. Bacon. From the course description: "By the time you leave this class, you will have a thorough understanding of the Maillard reaction, using fire, common kitchen appliances, and modern techniques to transform bread into the wonder we call 'toast'."

Sony announced the "latest in fuel technology" called Sony Power Food. Says the leading culinary engineer: "Now the same fuel we've used to power ourselves for thousands of years can be used to power personal electronics."

The Southern burger chain Krystal (with hundreds of locations) announced a new drone delivery program called "Krystal Fly-Thru." Quote: "The great taste of Krystal has taken to the skies! Now, Atlantans can have their Krystal favorites delivered via quad-copter." The company said it's testing it in Atlanta for a 2015 launch.

Cheetau by Chester, a Fragrance by Cheetos

In the grand tradition of fast food stunt fragrances (see here), Cheetos introduces Cheetau by Chester and is giving away 100 bottles. The fragrance captures "the smell of hunger" and you can watch the ad below:

The Dehydration Backpack from Timbuk2

Via Inside Scoop SF, here's the "Dehydration Backpack" from bag maker Timbuk2 that lets you carry an entire keg on your back. Quote: "Riding the city streets is a joy, until you get thirsty. Really thirsty. To combat such thirst, we partnered with friend and local manufacturer, Anchor Brewing, to develop this highly technical, exceptionally practical, keg backpack. Designed to fit an entire keg of Anchor Steam beer..." Of course there's video:

A Trailer for In the Kitchen with Hannibal

Here's a trailer for In the Kitchen with Hannibal, "a new kind of cooking show." There's plenty of delightfully creepy food styling, so go watch: 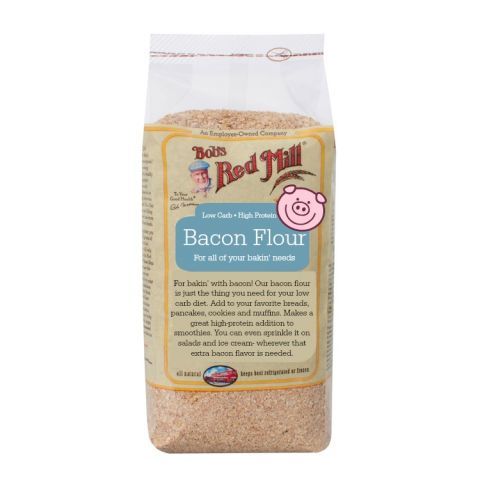 Flour Made from Bacon


Milwaukie, Oregon's Bob's Red Mill announces the launch of a Paleo-friendly flour made entirely of bacon. According to its packaging, the "Bacon Flour" is low-carb, high-protein and can be added to "your favorite breads, pancakes, cookies, and muffins" whenever extra bacon flavor is needed. 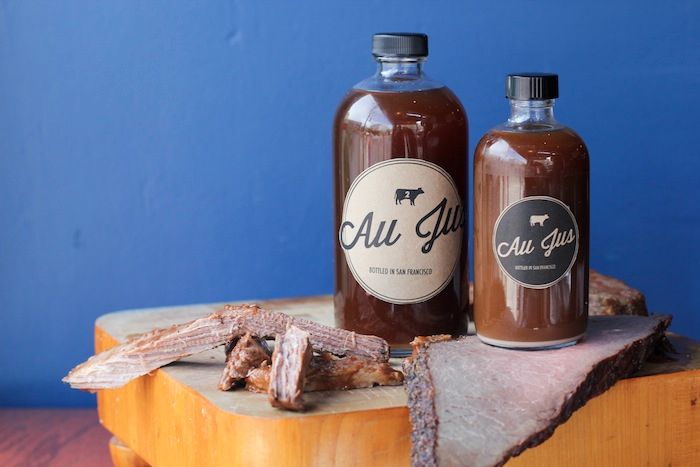 
San Francisco's meaty restaurant the Beast and the Hare teamed with online magazine The Bold Italic to announce the launch of its 10-day Au Jus Cleanse, during which participants drink six bottles of pressed jus per day. According to one satisfied customer: "I'm able to knock back about 900% of my daily sodium before noon, and every bottle after that is just a bonus. Do you know how much sodium is in your typical fruits-and-veggies bottle of juice? Hardly any, and that concerned me."


Eater PDX is keeping tabs on Portland, Oregon's restaurant pranks of the day. In a now-annual tradition, pizzeria Sizzle Pie is peppering the city with fake parking tickets that are actually coupons for a free slice of pizza; while another staunchly anti-pineapple pizzeria will serve the maligned topping all day today. 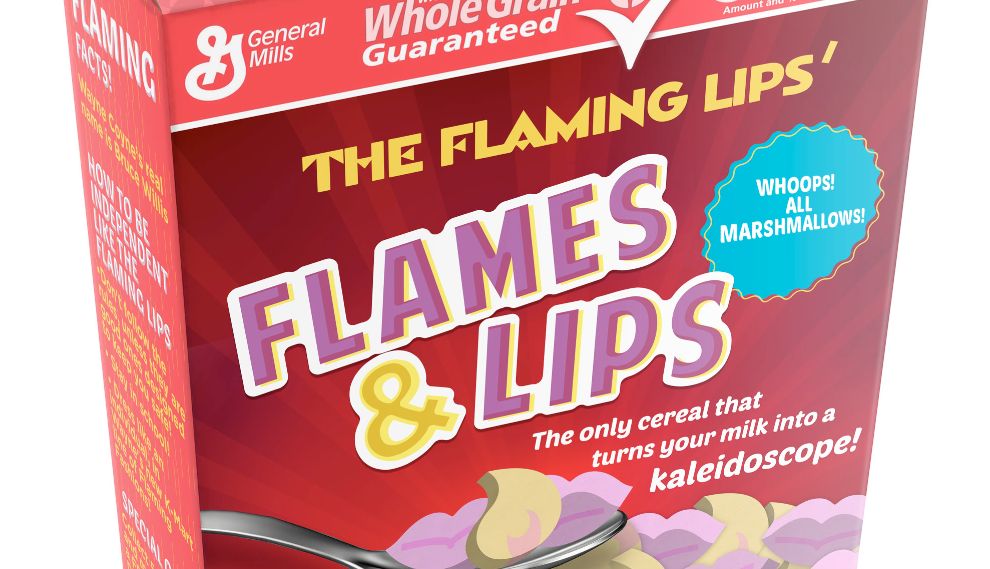 
Courtesy the folks at Funny Or Die, here's a look at the Flaming Lips' Cereal: Dubbed "Flames and Lips," the cereal is made entirely of marshmallows but does promise a balanced breakfast of "11 essential vitamins and minerals AND DRUGS ;)."