My Father Graduated From Hamburger University

K. Annabelle Smith on the history behind McDonald's educational efforts

Share All sharing options for: My Father Graduated From Hamburger University

My father has his diploma hanging in his basement office in Connecticut and he's still proud. But it's not the one he got from George Washington University, it's a degree in "Hamburgerology" from McDonald's. He was a member of graduating class #250, and though he did not receive "honors," if the Dean of students could see the number of McChicken wrappers in his Prius currently, she might send him a plaque.

In 1978, he attended Hamburger University in Elk Grove, Illinois with the goal of earning the title of assistant manager at his branch in Pittsfield, Massachusetts. HU still exists today, but it's a lot bigger than the one-building facility where newbs like my father learned to cut french fries. There are seven HU campuses globally — the most recent facility was built in Shanghai in 2010 for a total of $36.6 million. Since HU opened, 275,000 students have earned diplomas.

My father's degree in Hamburgerology was handed to him 17 years after the first graduating class of 15 pupils received theirs in the basement of an Elk Grove Village McDonald's.

Ray Kroc, the man responsible for franchising the McDonald's Corporation, and ultimately making it the burger megalord the company is today, thought it smart to invest in the skills of his employees. He went all in with Fred Turner, McDonald's former senior chairman, to open the first school.

"For the quick-service restaurant industry, McDonald's was the first to have a training program like that," McDonald's archivist Mike Bullington says. "When you think about it, it's pretty amazing. The 1961 McDonald's was not what it is today."

There were 234 McDonald's locations in 1961. The menu included hamburgers, cheeseburgers, french fries, shakes, soft drinks, coffee, and milk. (Items like the Filet-O-Fish and Chicken McNuggets weren't added until years later). There are currently over 35,000 locations in 119 different countries.

Before the first HU classes were in session, McDonald's operators would train in stores with amateur film strips, Bullington says. It was cheaper, but they couldn't offer the breadth of training employees needed. Kroc planned a $25,000 investment in those skills for the first HU, but a total of $100,000 was spent to get the program up and running — a lot of dough for 1961.

The McDonald's where the first HU classes took place was located in the then-sparsely populated town of Elk Grove, Illinois, about 22 miles west of the McDonald's headquarters in Chicago. It attracted hungry drivers from the state highway junction of routes 72 and 83, northwest of O'Hare International Airport.

My father now knows the ideal viscosity of a Shamrock Shake.

In 1968, McDonald's opened a larger, $500,000 facility in Elk Grove that my dad trained in a decade later. When he arrived, the area was still a smattering of unrelated buildings lined with gas stations and mini strip malls.

On one side of my father's dorm in the Hyatt Chalet at 1920 East Higgins Road (he paid a total of $15.75 to stay there) was a McDonald's — where he says most of the HU attendees would spend meal times — either out of habit or out of financial necessity. They all agreed that they were glad not to be working at that particular store, as it was basically next door to the corporate training center.

Through his teens and into his twenties, my dad worked for the company with a dream that one day he'd run a fast food joint of his own. He was enrolled in a week-long "advanced operations" course schedule including subjects like "Basic Refrigeration" and "Ice Machine Electives."

There was a class devoted to proficiency with the Frymaster Electric Fryer. My father now knows the ideal viscosity of a Shamrock Shake. Members of the first graduating class of '61 were required to complete courses in chemistry. I am still on the fence about which subjects sound harder.

A day at HU wasn't much different than a day at your typical high school: You were expected to be at class around 8:30 a.m., you'd break for lunch for an hour around noon, and finish up classes by 3:30 or 4 p.m. Most students were about my father's age — 24 or so — though some students were in their early thirties. Classes were lecture-style and held in large rooms with up to 100 students. "We just sat there and listened," he says. Though, he recalls a few overeager students in the front. I asked him where he sat during his time at HU: "I didn't sit in the back of class but I certainly didn't sit in the front row."

He remembers taking basic management classes; he learned how to make french fries. It's been 36 years since he attended — the specifics are probably lost somewhere with those McChicken wrappers I mentioned earlier.

My dad dug up a letter from HU detailing his itinerary and dress code in the basement beneath a dolphin sea-scape diorama I built in 2001: 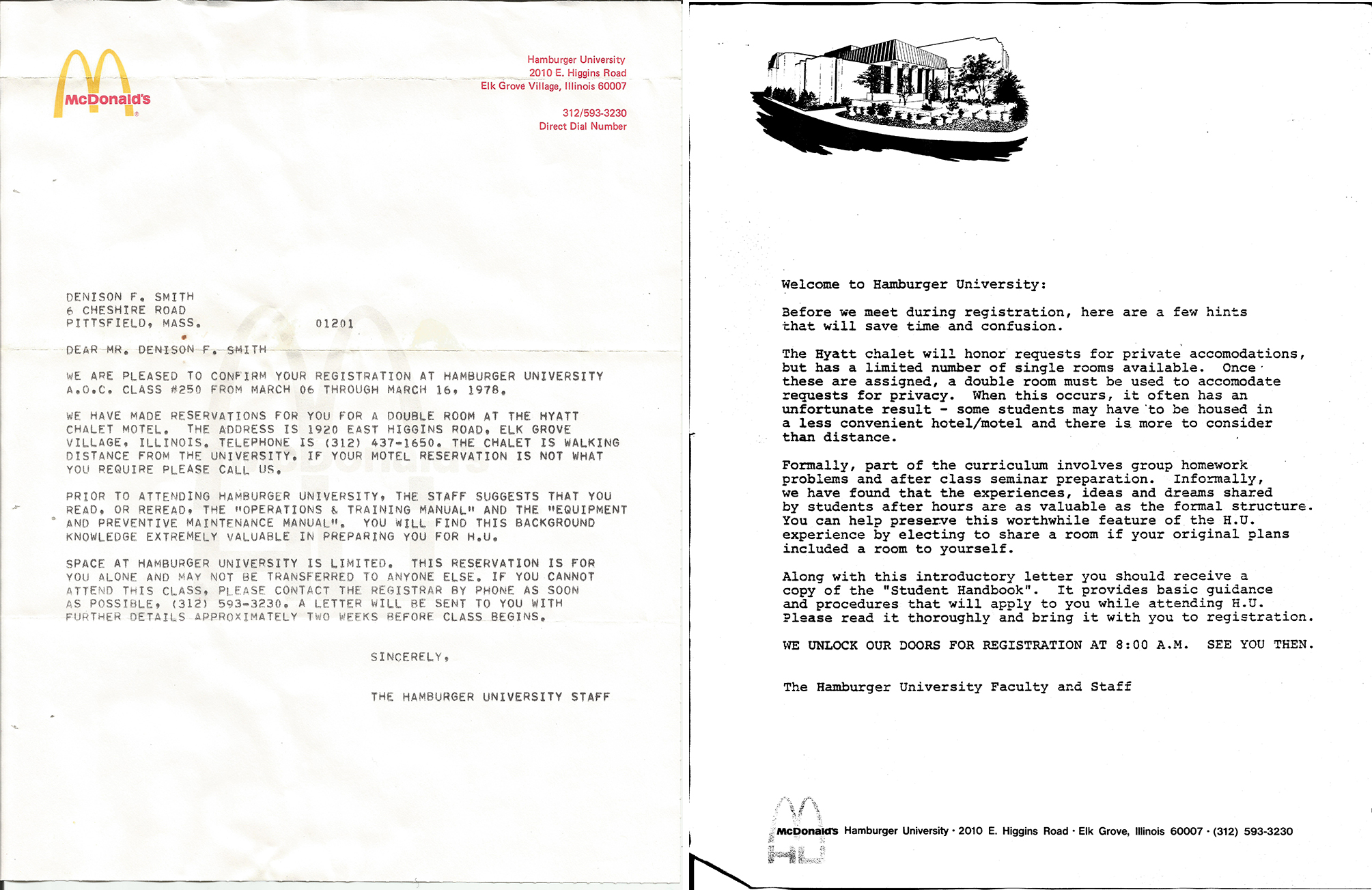 "McDonald's uniforms will not be necessary," it read. "Professional, casual clothing will be suitable attire during the session." He recalls feeling relieved at the prospect of dressing casually for his first business trip — though "casual" excluded jeans, sandals, cut-offs and T-shirts.

Any downtime was limited to what was in walking distance from the hotel or what was at the front desk: "For your leisure time we have chess and other assorted games at the front desk," the Hyatt's welcome letter states. "They are not available Tuesday, Wednesday and Friday."

It was a big deal to be sent to the "holy grail of the fast-food industry."

On Monday nights, a bus offered to take students to a "local shopping venture where liquor and food can be purchased."

My dad, who at the time had "his eye on the prize," did not make any liquor purchases on the trip. It was a big deal to be sent to the "holy grail of the fast food industry," he tells me. Going through this training process was taken very seriously by upper management and corporate. Surprise here: it still is.

By 1983, "the Lodge" was built to house students on the 130,000-square foot facility at headquarters which had been moved to Oak Brook, IL. It's also run by the Hyatt, and there's a bridge that connects the hotel to classrooms—an upgrade to the tiny room my father shared with a chain-smoker from West Virginia.

The learning approach at first was lecture style, but these days it's a bit more hands on, Bullington says. Classes run year-round and most of their seven facilities include 17 teaching rooms, a 300-seat auditorium, and three kitchen labs where students simulate everyday scenarios of running a fast food restaurant.

"Somebody slips and falls, there's a backup in the drive-thru line," Steve Mazeika, a member of the McDonald's Global Communications team, says. "Students use real food to replicate what it would be like to run a real kitchen."

The program has expanded to offer classes for all McDonald's employees, whereas in the beginning, it was solely for those interested in management or operational positions. Even Bullington has taken HU courses. He has been with the company for a little over nine years and his office is located in the building my father took classes in 36 years ago.

Though the names of the classes have changed, the general goal remains: to shape each employee into a master of customer service, french fry frying and burger assembly. (Though sometimes, even well-trained employees forget the napkins). A few present day examples include studies in general management, cleanliness, service, business simulation, and a business leadership capstone.

In some ways, Hamburger University has failed: Though they'd like employees to be "lifers," my father did not stay with the company to run his own McDonald's with the knowledge gleaned from his studies. In his late 20s, he took a retail management position at the now-extinct department store Sage-Allen in Hartford, Connecticut. Where HU was successful: My dad still loves him a greasy Big Mac (despite my objections).

When I tell Bullington this, he says: "Sounds like your dad still has ketchup in his veins."

—K. Annabelle Smith writes about weird food history at Smithsonian.com and has tackled everything from gun culture in New Mexico to the lost Rice Krispie mascot. Her work also appears in OutsideOnline.com and Esquire.com.