By the Numbers: The James Beard Awards Semifinalists and Women

Share All sharing options for: By the Numbers: The James Beard Awards Semifinalists and Women

Did the James Beard Awards include more women chefs in the 2014 semifinalists list than in previous years? Yesterday the James Beard Foundation announced the restaurant and chef semifinalists for 2014, and in the wake of the announcement a few people, including Los Angeles Times food editor Russ Parsons and New York Times restaurant critic Pete Wells, noticed that there seemed to be a lot more women listed than usual. "Almost half of the first-round nominees for outstanding chef in the 2014 JBF awards are women," noted Parsons.

Could it be that in the fallout of last year's Gods of Food scandal — in which Time magazine defended their right to not include any women chefs in an influential chefs feature — that other organizations had taken note of their own possible gender bias? Has the Beard Foundation significantly increased the number of women chefs represented in their Awards program this year?

Eh, yes and no. There have been some improvements but also some setbacks, and in sum it seems that the JBFAs have pretty much stayed the same. Every year since 2009, women have made up about 20% of the semifinalists in chef categories. Below, Eater crunched the numbers from the past six years of JBFA semifinalists. And stick around: there will be more where this came from when the Foundation announces the finalists next month, as well as the winners in May.

First things first: there are, in fact, eight women (out of 20 total) named as semifinalists for Outstanding Chef this year. This is a 40% increase from last year's five women in the same category. In general, the Outstanding Chef category has been increasing the number of women semifinalists each year since 2010.

While the overall percentage of women included in the total semifinalists hovers around 20%, it is worth noting that this is a vast improvement over most prestigious chef events.

The numbers are pretty stagnant: there has been no significant increase in women chef semifinalists since 2009. Often the women chefs chosen as semifinalists are the same chefs year after year. (And Eater will examine whether these women advance and ultimately win later this Spring.) There is not historically a strong female representation in any chef category apart from Outstanding Pastry Chef, excluding this year's Outstanding Chef category.

Female semifinalists have been going down steadily in the Best Chef: Mid-Atlantic category since 2009 and in the Best Chef: Southwest category since 2010. The female chef representation in Best Chef: Midwest and Best Chef: Pacific/West (a region Parsons claims has been "long friendlier to women chefs than elsewhere") is pretty abysmal, with both categories averaging about two women per year. The number of women represented in Best Chef: Southeast is almost comically stagnant, with three women listed each year since 2009. 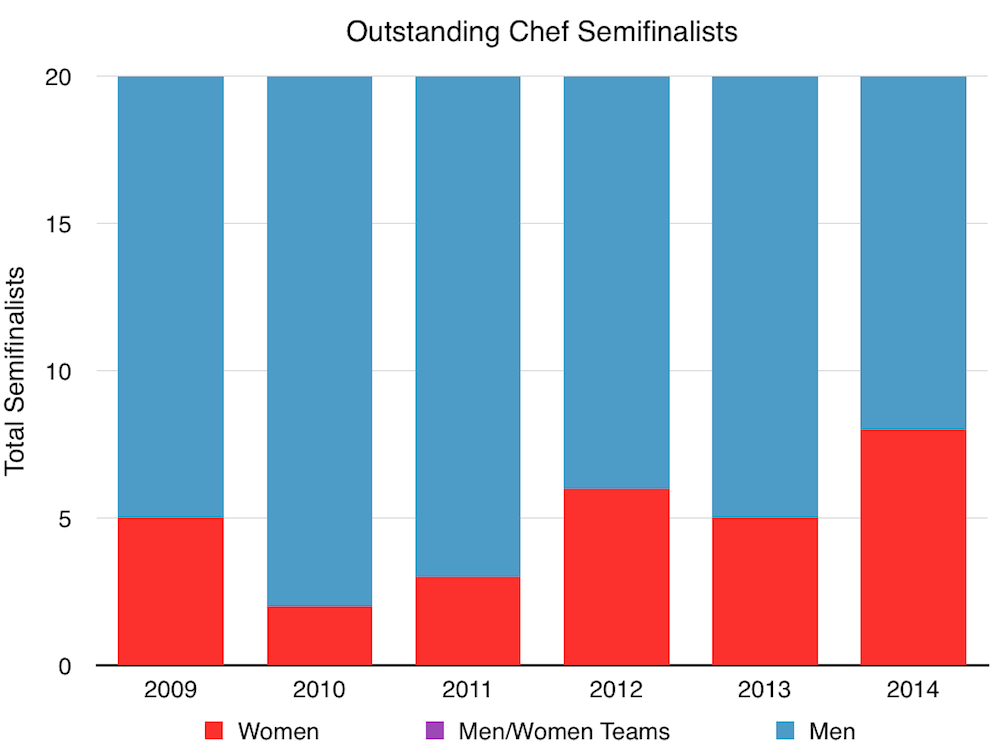 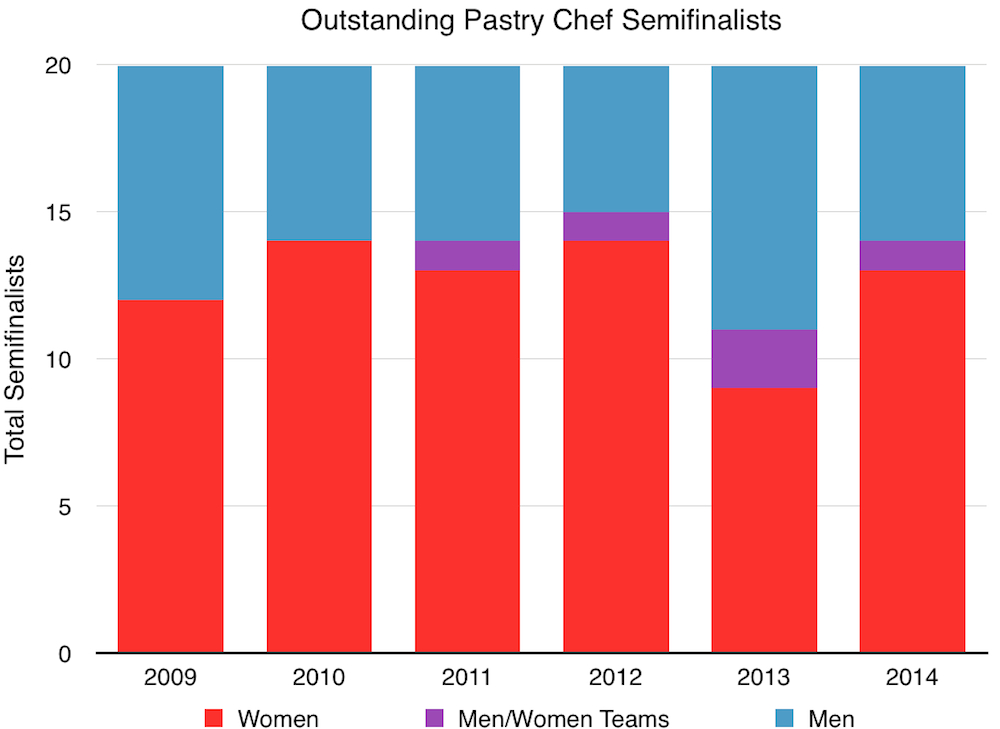 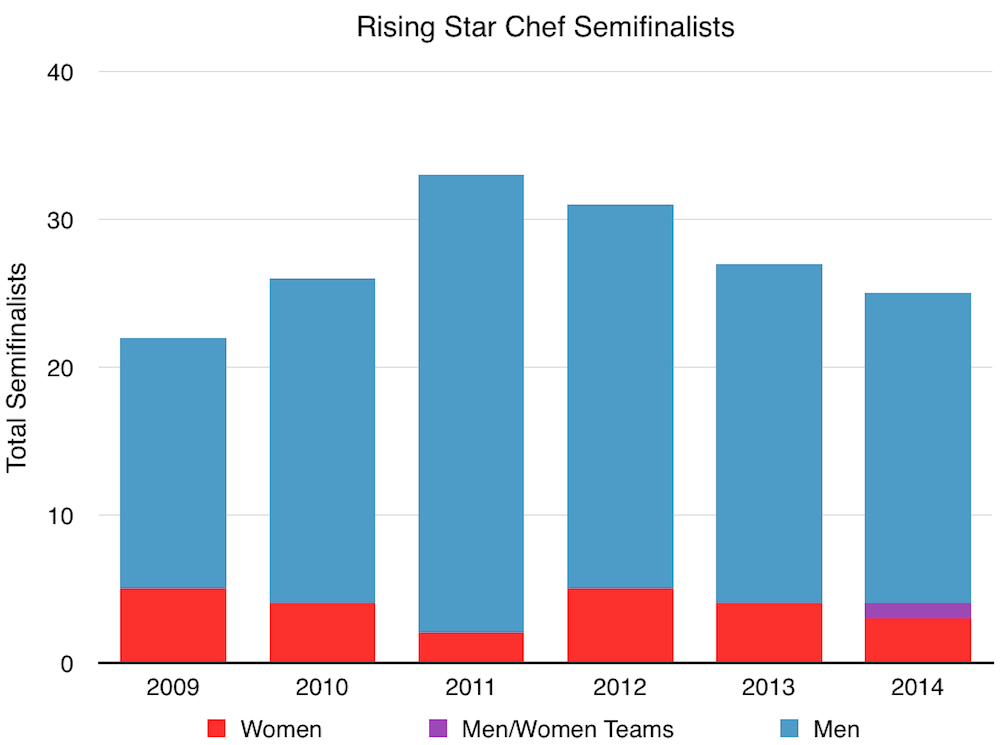 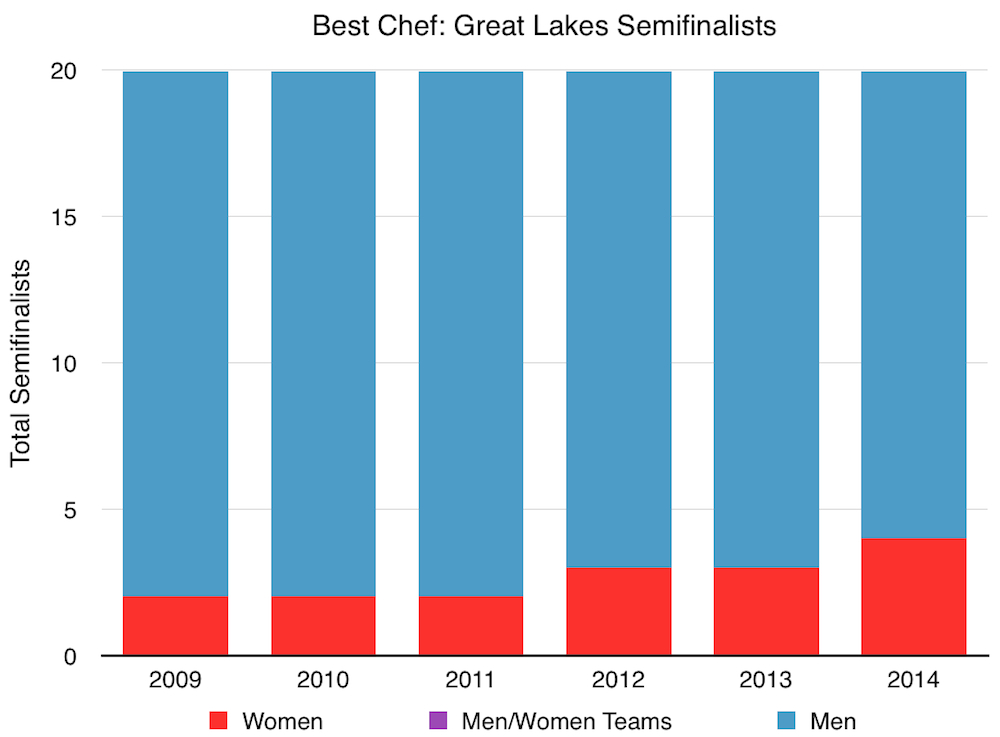 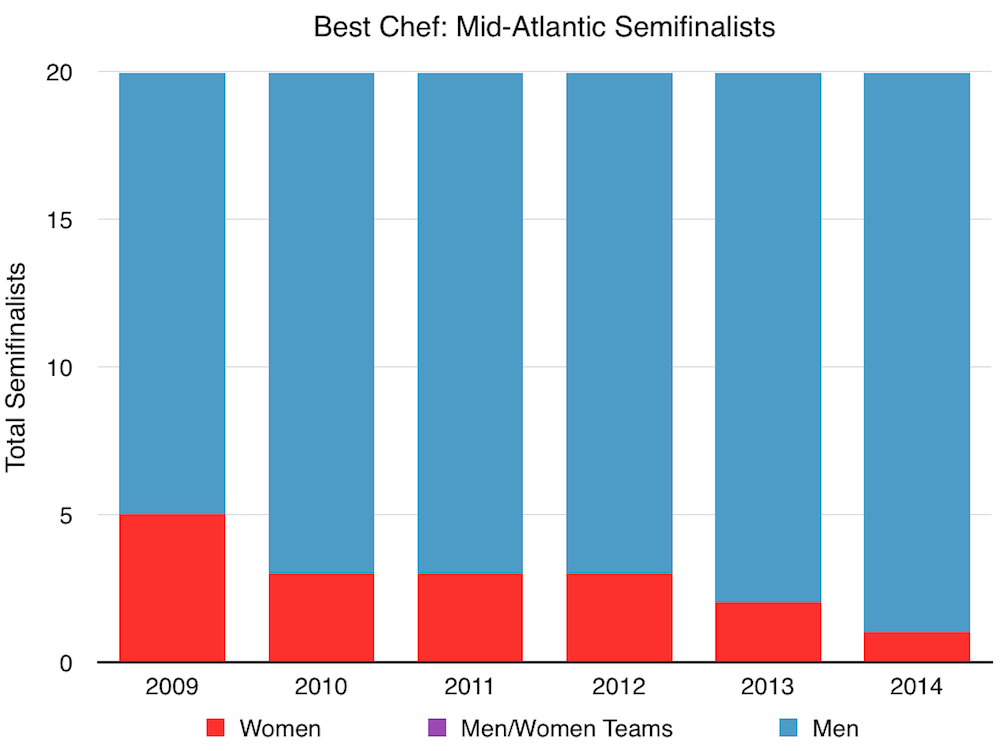 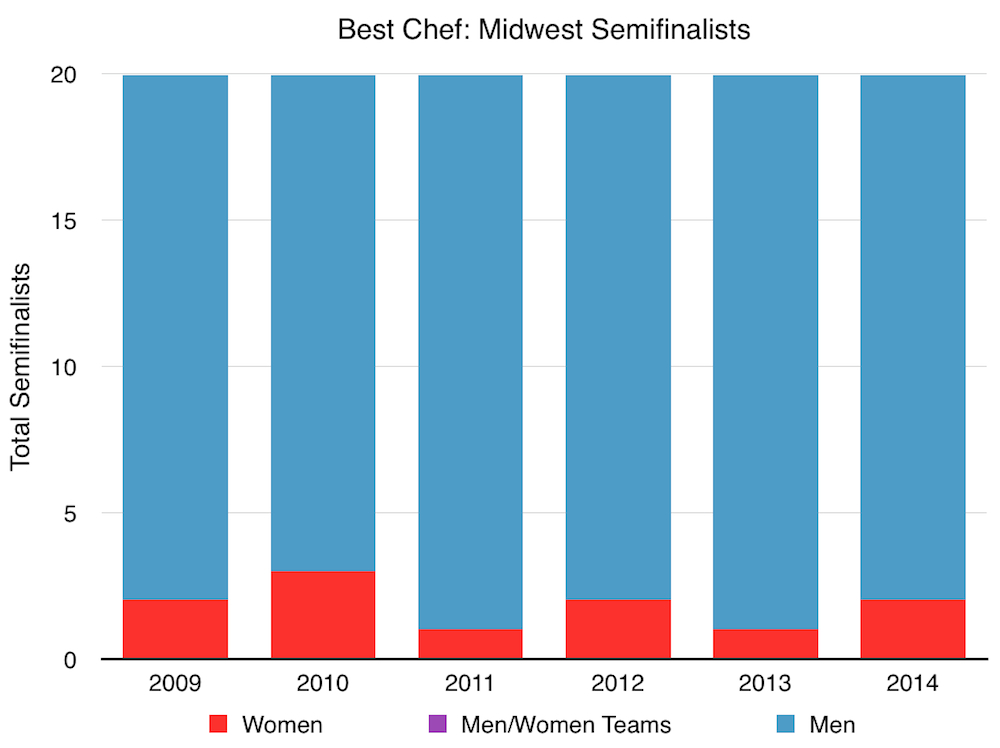 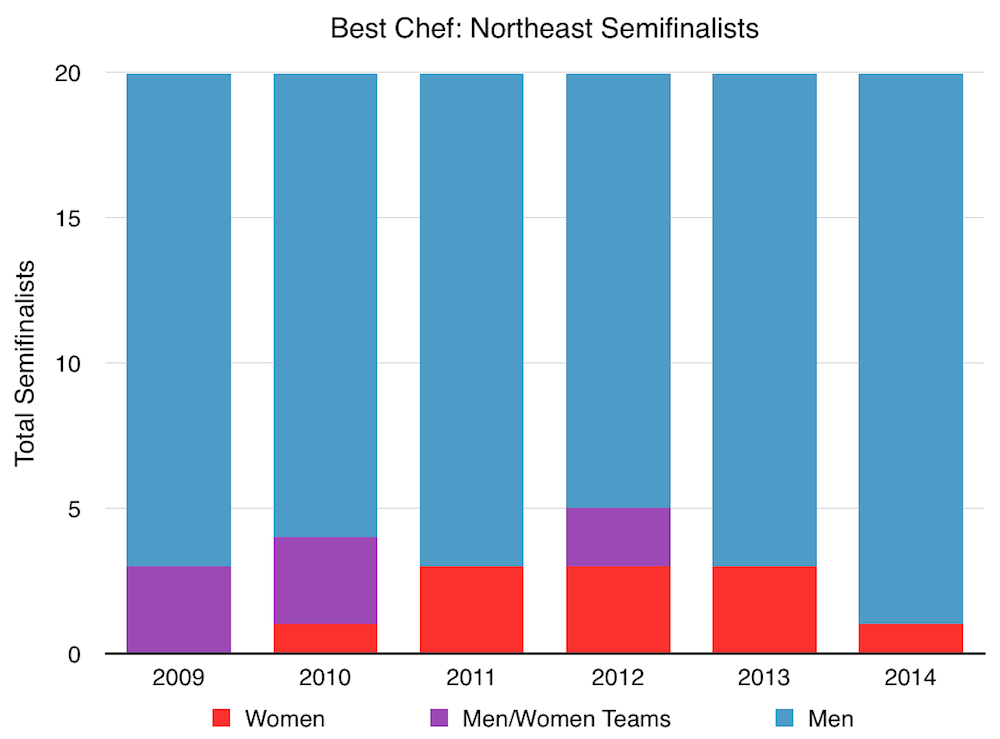 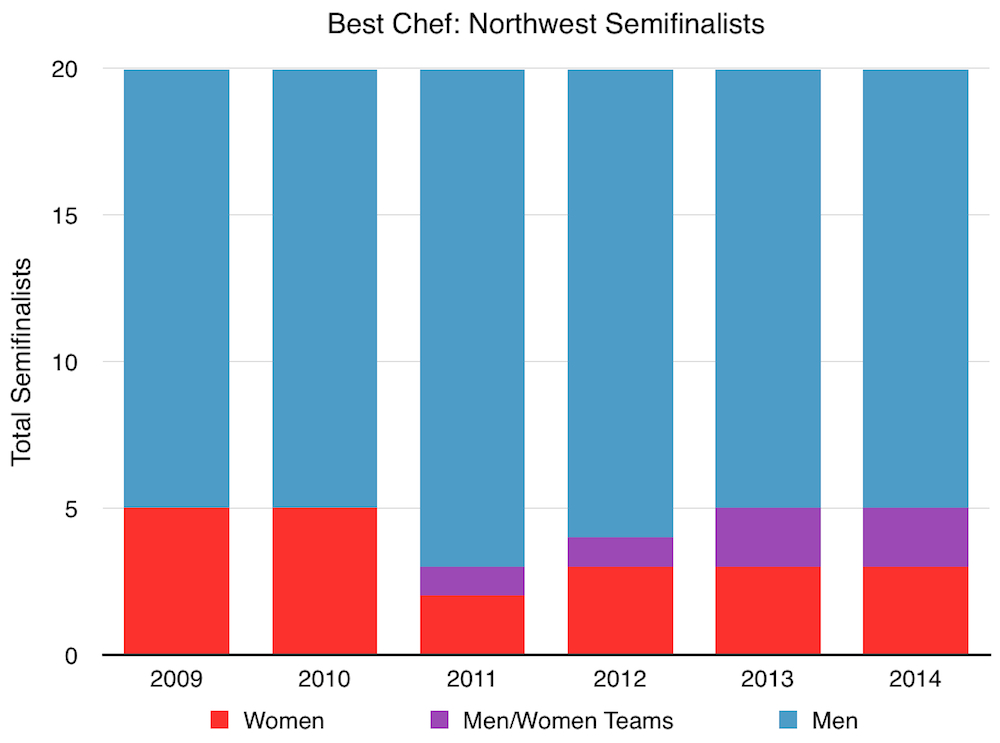 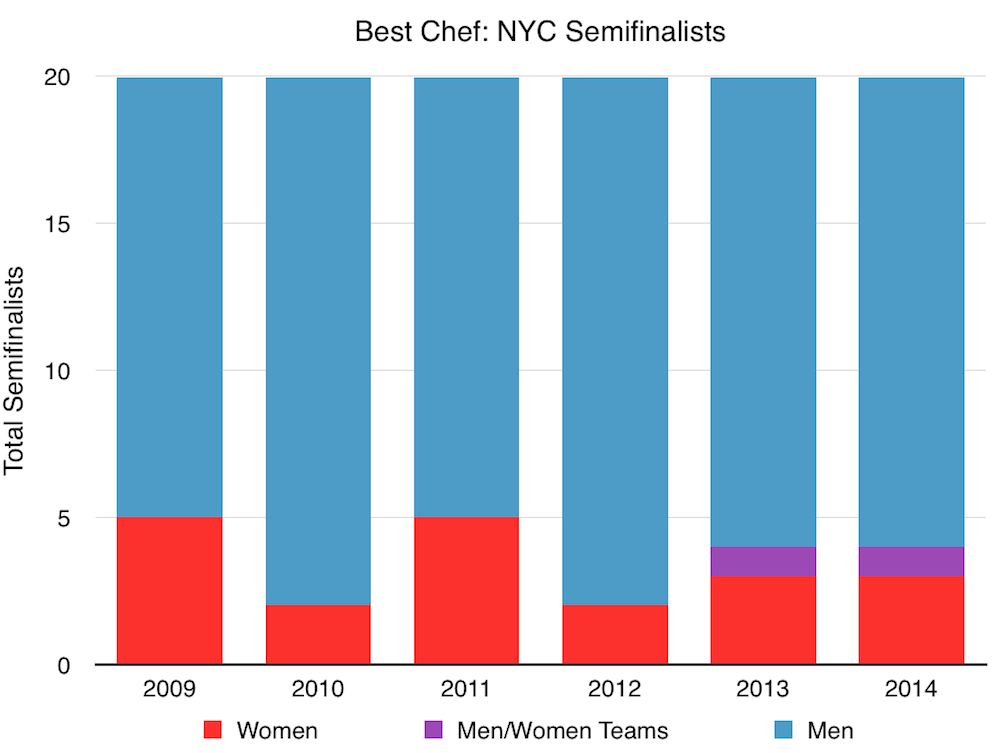 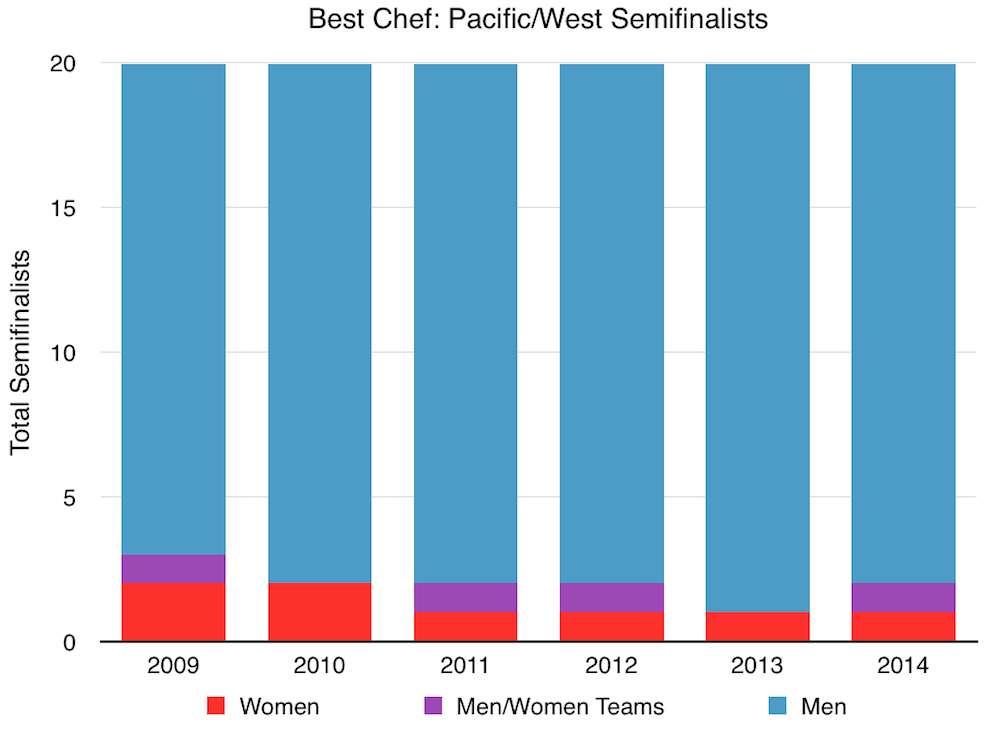 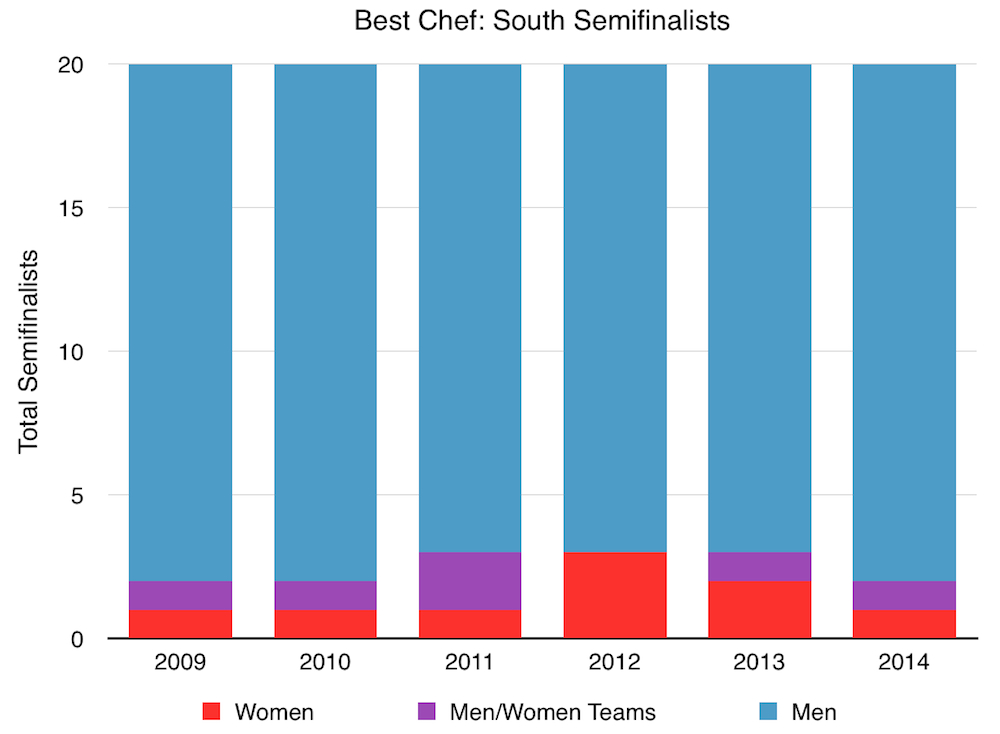 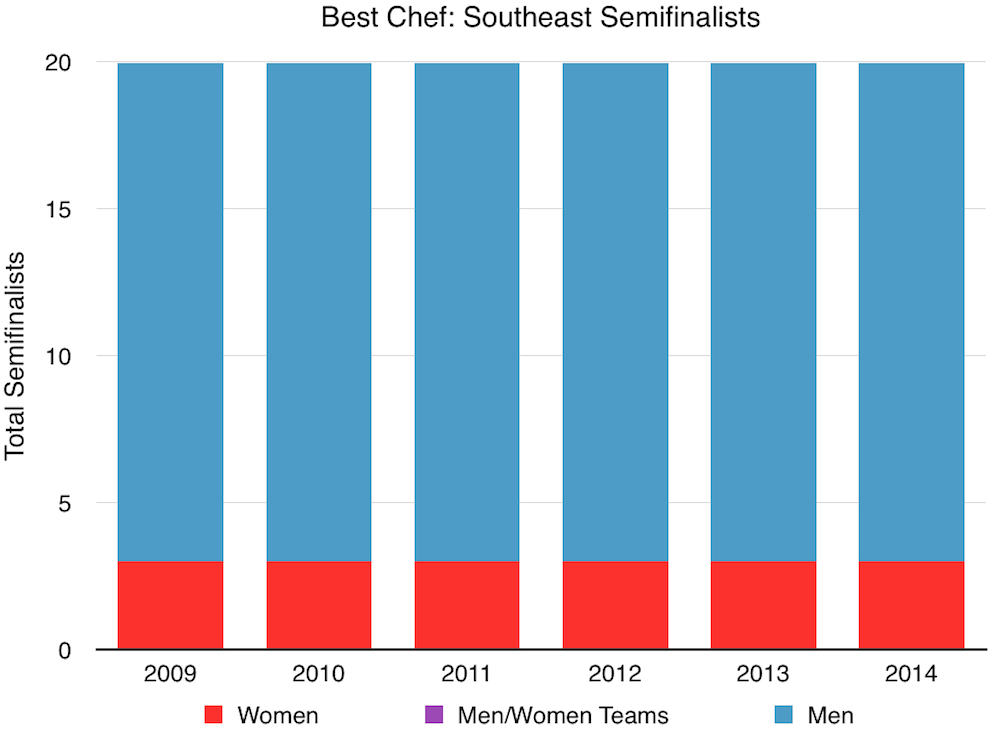 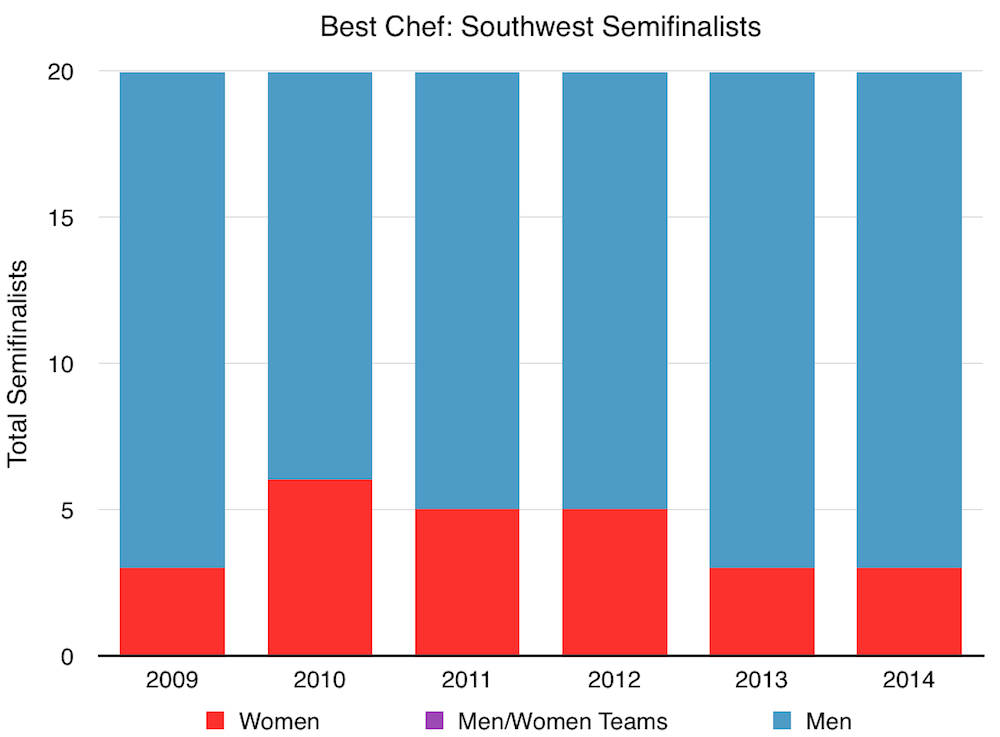 NOTES: The Best Chef: Pacific and Best Chef: West categories changed slightly over the time frame examined and were lumped together for the purposes of this piece. All categories have 20 semifinalists, except Rising Star Chef, which for some reason changes every year.

Only categories that nominate chefs were included below in order to make this coverage parallel to Eater's previous coverage of chef gender disparity. It should be noted that the JBFAs have made significant improvements in the category of Outstanding Restaurateur, going from zero out of 20 semifinalists in 2009 to six out of 20 semifinalists in 2014.