75 percent of women report being harassed by co-workers on a monthly basis.

Not surprisingly, the figures are significantly higher for women. Women experience sexual harassment on a regular basis: Two-thirds of the women surveyed reported being sexually harassed by management on at least a monthly basis, and over half felt harassed on a weekly basis. To make matters worse, almost 75 percent of women report being harassed by co-workers on a monthly basis and 64 percent revealed that it often occurs weekly. This could explain why the restaurant industry is the "single-largest source of sexual harassment charges filed by women" with the Equal Employment Opportunity Commission. 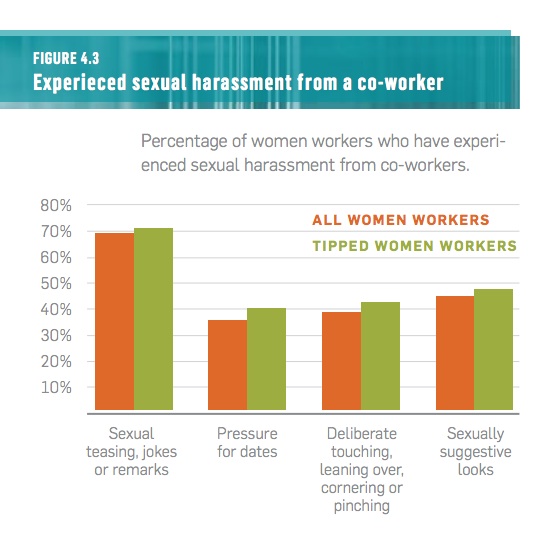 The problem is particularly bad for women in states like New York where the tipped minimum wage is $2.13 an hour and the majority of an employee's income comes from gratuity. The co-director of ROC Saru Jayaraman tells USA Today that "women who have to live off of tips are subjected to the worst kind of sexual harassment." Jayaraman explains this is often the case because they are "forced to dress and act certain ways that make them vulnerable to customer, co-worker and manager harassment."

Men are prone to comments about their sexual orientation, especially from management.

The report also reveals that the type of sexual harassment each gender experiences is quite different. Women are typically subjected to sexual jokes, remarks, and questions. They also more often touched, fondled, or groped inappropriately. Women are also often told to be "more sexy" and to alter their "appearance beyond the restaurant's dress code." Men, on the other hand, are prone to comments about their sexual orientation, especially from management. Both genders are equally subject to inappropriate text messages from co-workers or management, and both men and women are routinely asked to flirt with guests. Work should be a safe place, but sadly, the majority of survey takers noted that sexual harassment was a "scary or unwanted aspect of the work environment."