To thoroughly enjoy the glory that is Top Chef New Orleans, please welcome Alison Leiby, who will be here every week to take us through the season. 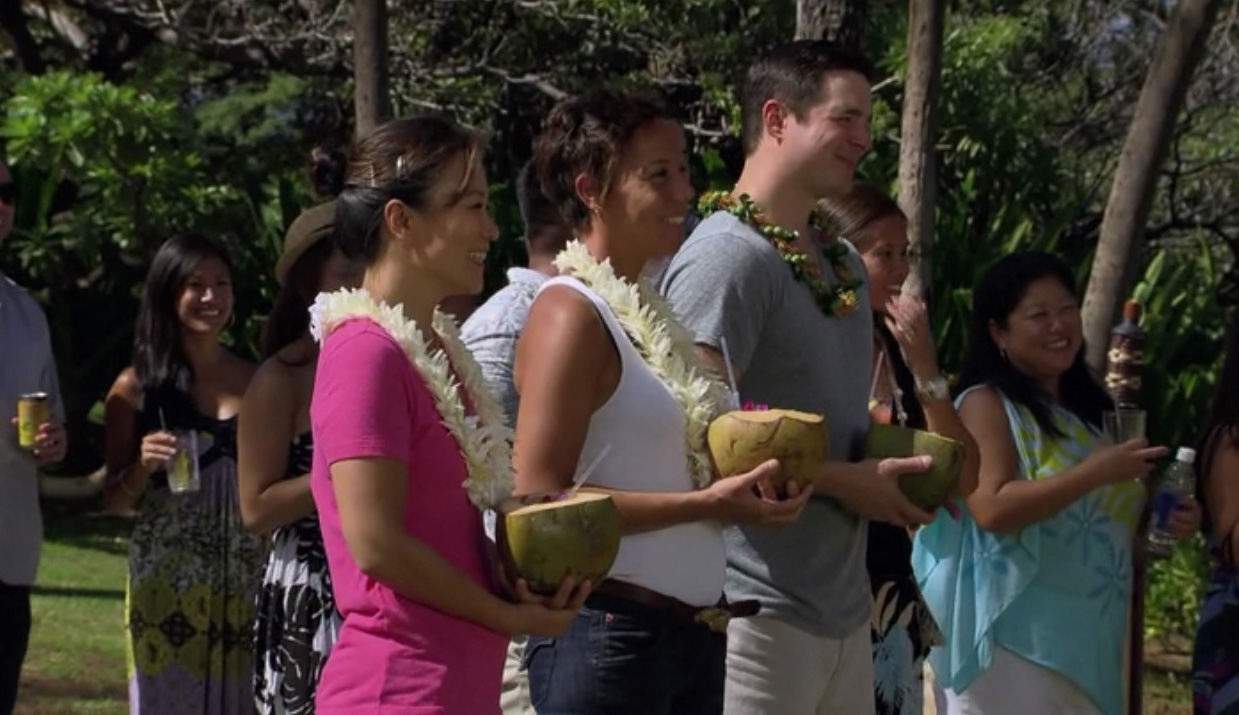 If Top Chef is a relationship, New Orleans was the long dating phase. We got to know everyone, see what we loved about them, see what we hated about them but would overlook because hey our kids would probably be really smart and attractive, and then at the end of that time eventually we decided to take things to the next level.

The next level in this relationship is a vacation together. Pack your bags, we're going to Hawaii for the finale, where inevitably everyone will be trying to put their best foot forward and seem like they deserve it all, but the close quarters and high stress will reveal the imperfections and flaws that could end the whole thing and leave them going home to a studio apartment to rejoin JDate (wait, who are we talking about now?).

When we last saw Nick Elmi, Nina Compton, and Shirley Chung they were in New Orleans and ready to see their families again for the undisclosed-amount-of-time break before flying to Maui for the finale. 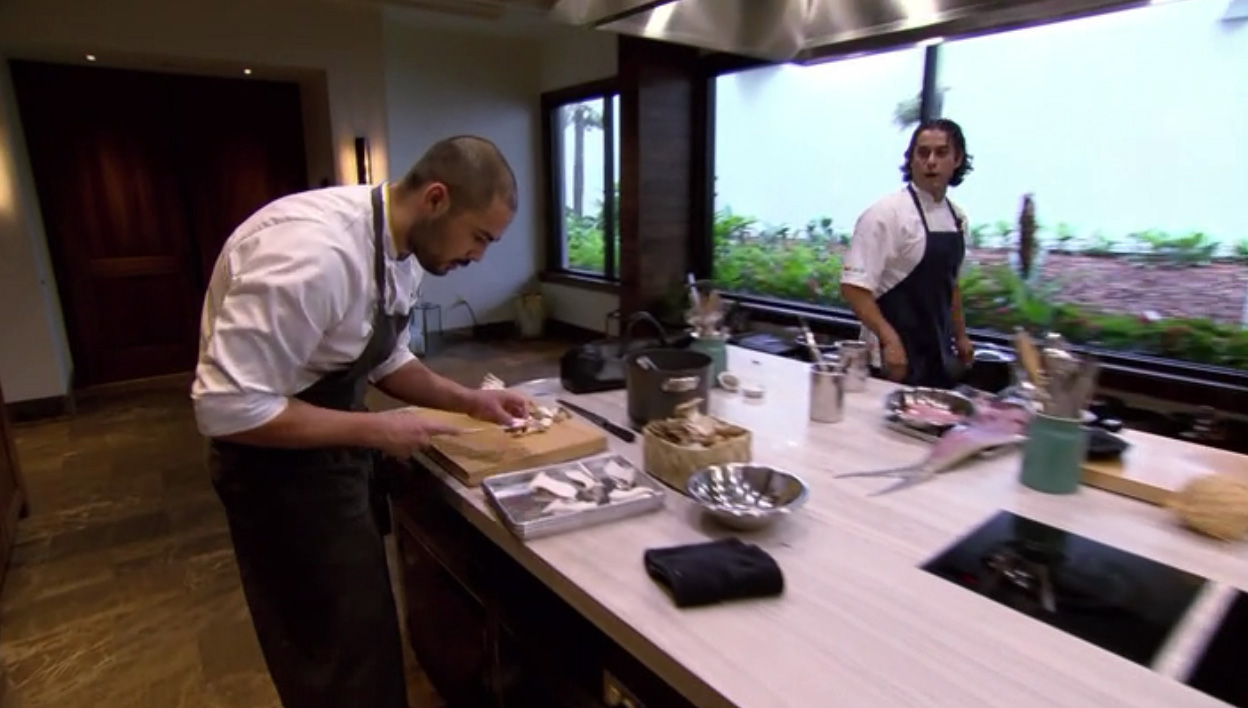 And while these competitors were on the show winning immunity and participating in group challenges, Louis Maldonado was toiling away in Last Chance Kitchen, winning seven consecutive times before having to battle the recently eliminated Carlos Gaytan. 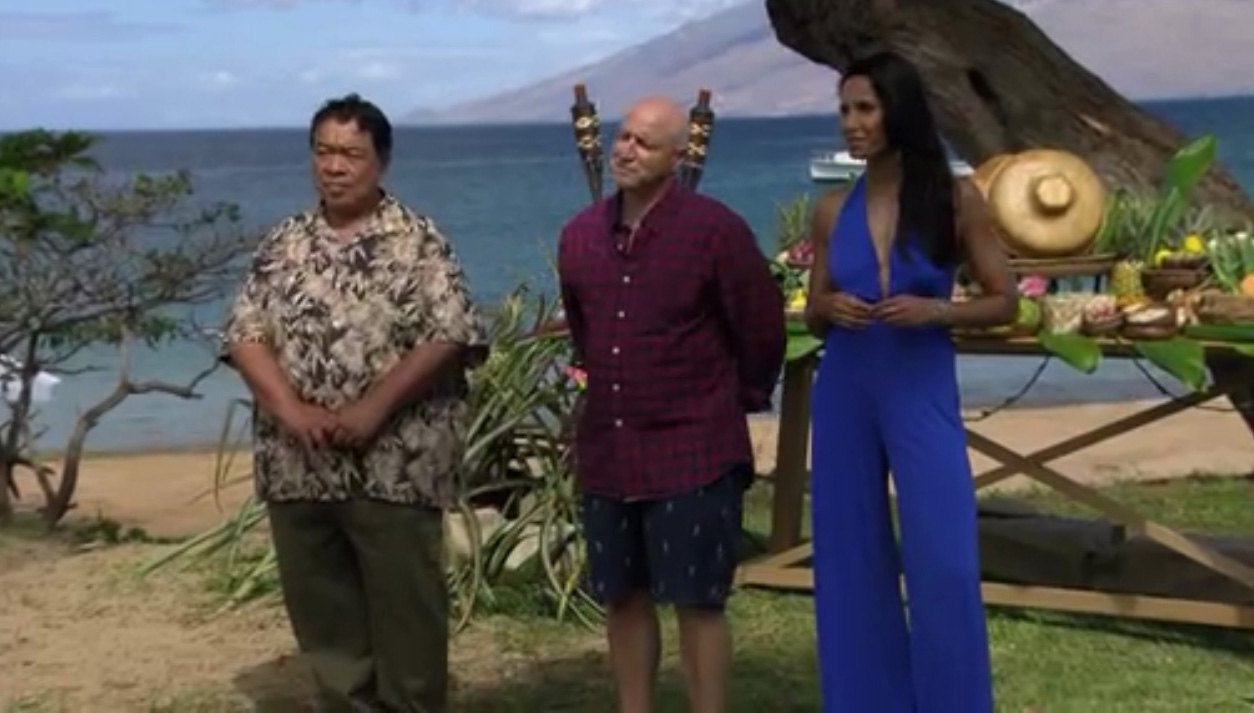 Nick, Nina, and Shirley arrive in Hawaii and head to a luau of sorts complete with professional hula dancers, drinks served in coconuts, and Padma Lakshmi dressed in an electric blue catsuit like she's an extra from Boogie Nights. She and Tom Colicchio introduce guest judge Sam Choy, a Hawaiian culinary legend. Nick makes sure to get in one solid "Are we getting lei'd?" joke before the judges reveal that the winner of Last Chance Kitchen: the chef returning to compete in the finale is total heartthrob Louis! 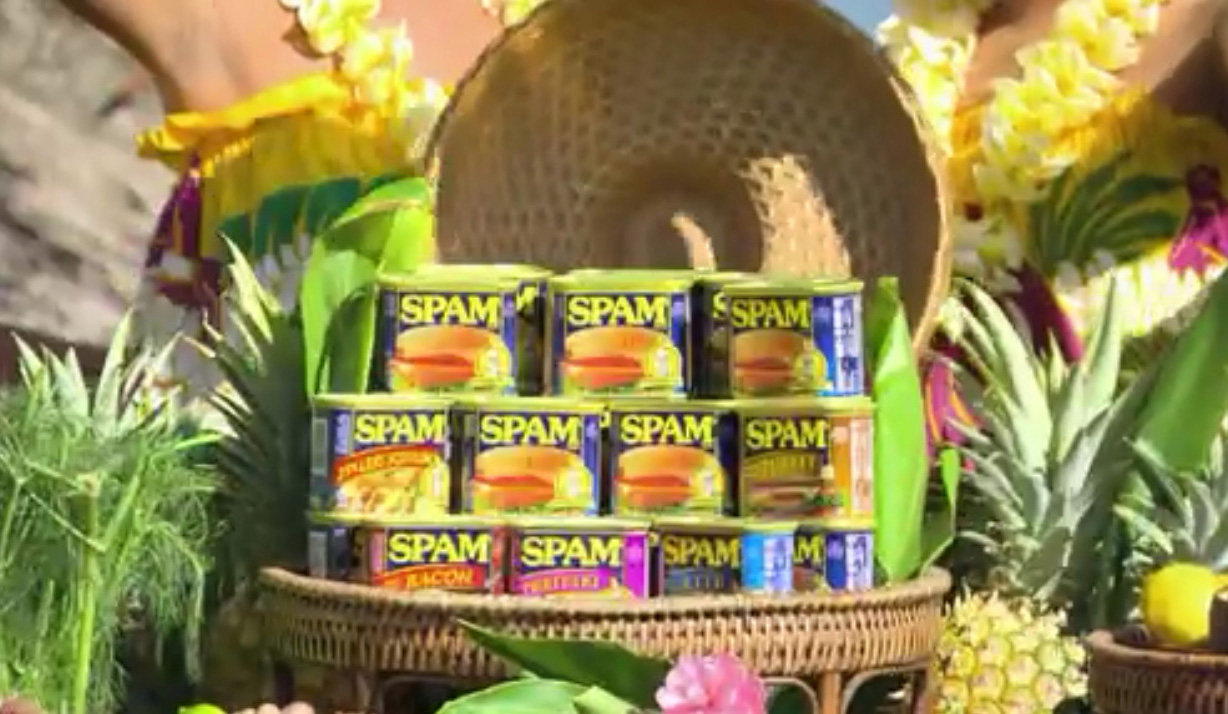 For the Quickfire Challenge the chefs must create a unique and inspired dish using "Hawaiian Steak" aka Spam, and the winner will receive $10,000. 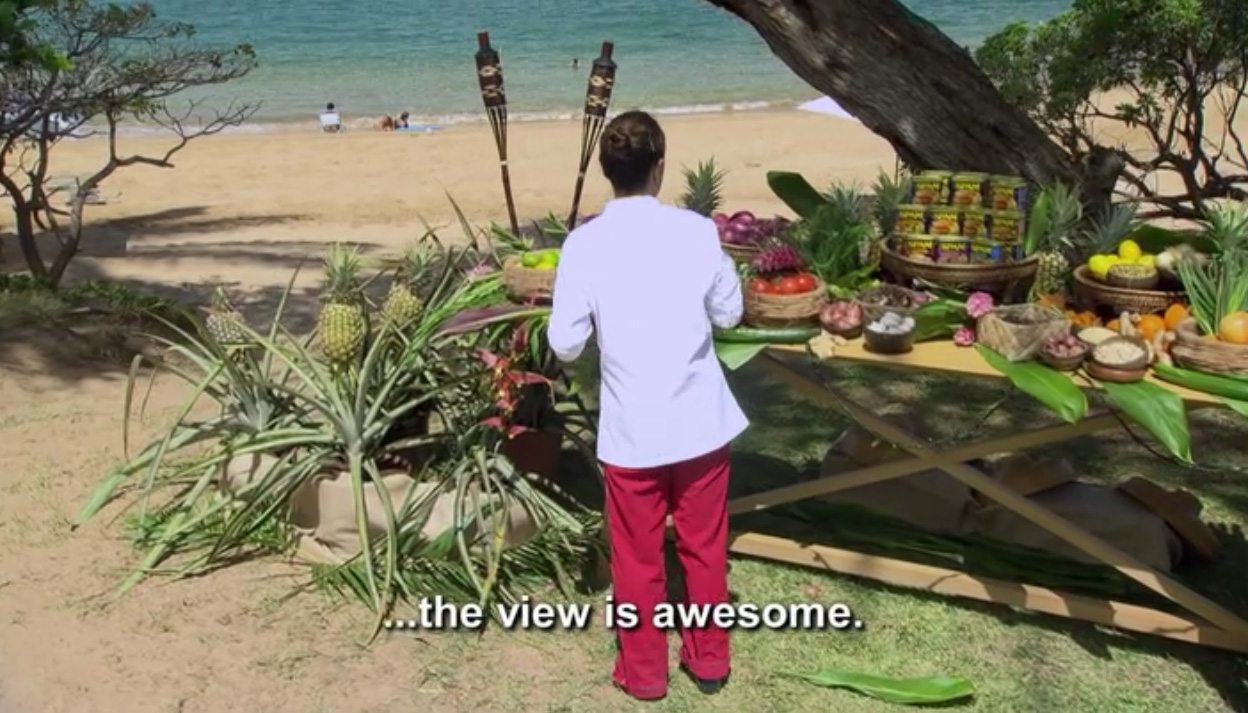 They start cooking right there in the middle of the outdoor party, easily distracted by the pristine vista of the Pacific ocean, the white sands and sparkling blue water mere feet away from them. I understand getting distracted by your surroundings when you are working, though. Like right now, I keep looking up out of my New York apartment window and into the window of my neighbor's apartment and oh okay it looks like they are having sex again wow he should get that mole checked out it's been getting bigger wait where was I?

In addition to the scenery distracting the chefs, the guests are also asking nonstop questions while they are cooking. It's impossible to do your job when people are constantly interrupting you. As a comic, I know this all too well. Though the questions for me are less, "How are you preparing that mousse?" and more, "Why is a woman on stage, is she the waitress?" and, "Why aren't you finishing graduate school?" That last one usually comes from my mother when she comes to shows. 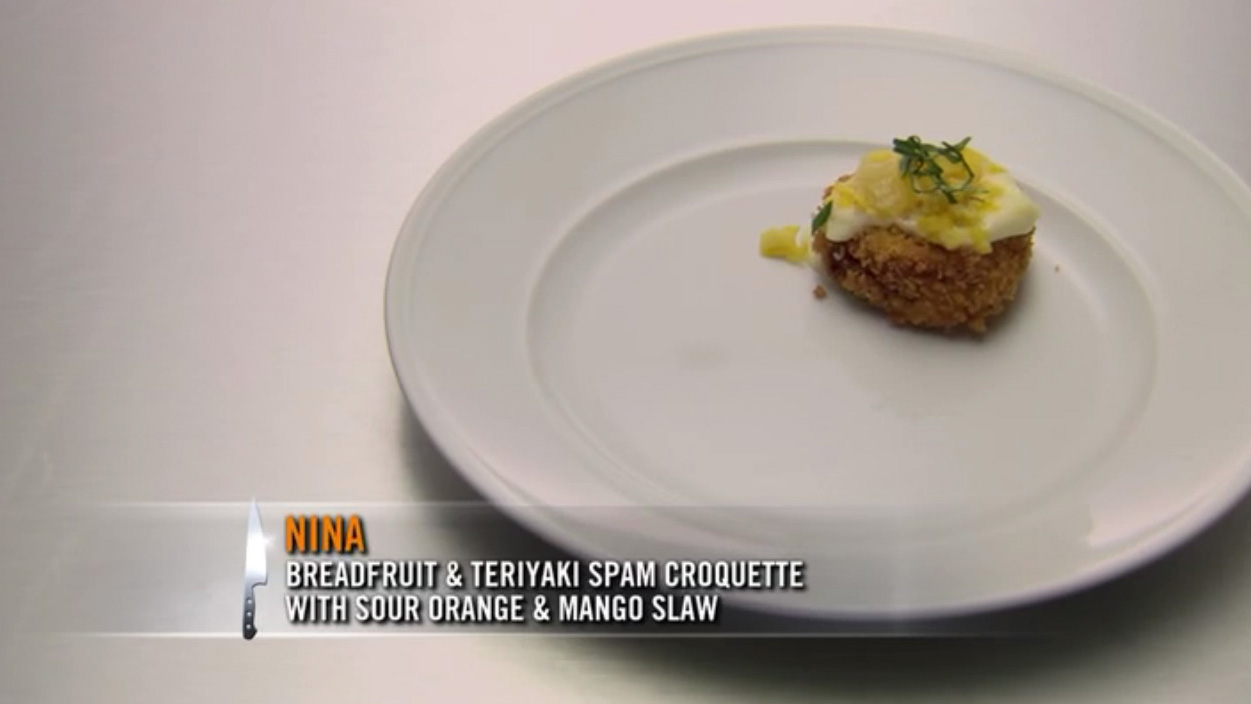 Shirley feels confident with this challenge because her husband loves Spam, though she always makes Spam fried rice for him. She decides to make deconstructed Spam musubi with nori and cucumber slaw. Chef Choy enjoys it. Nina makes a breadfruit and teriyaki Spam croquette with sour orange and mango slaw. 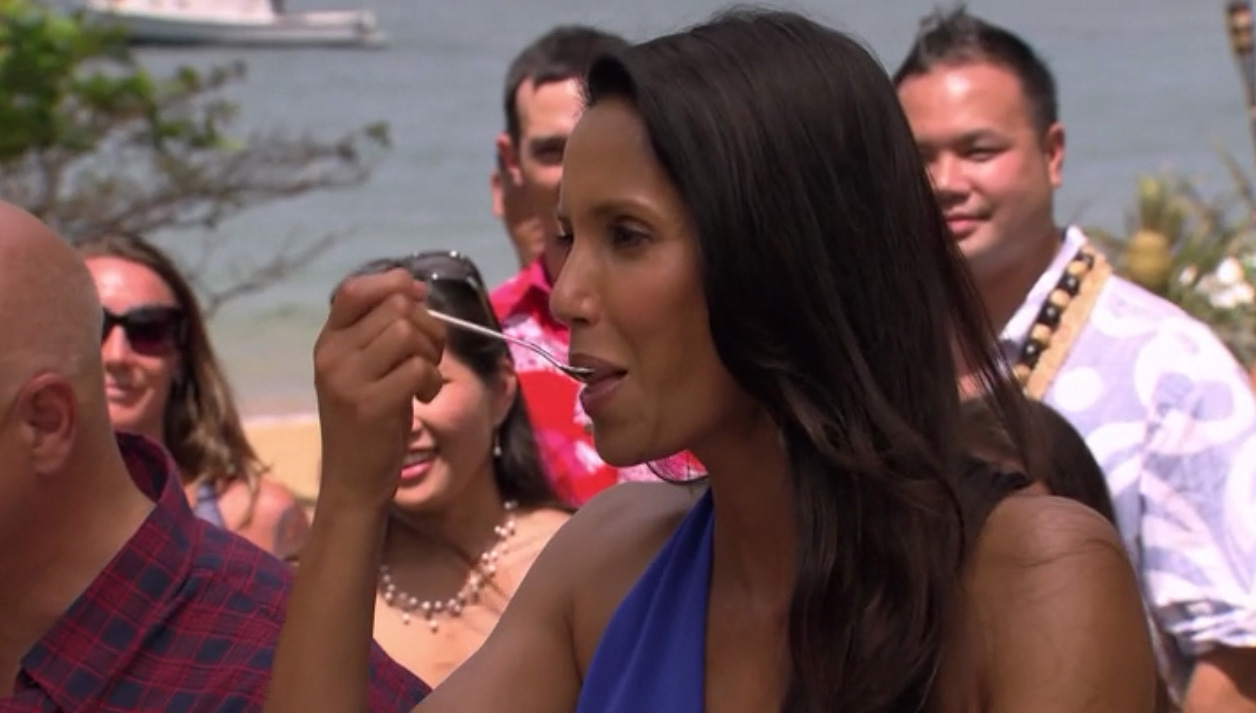 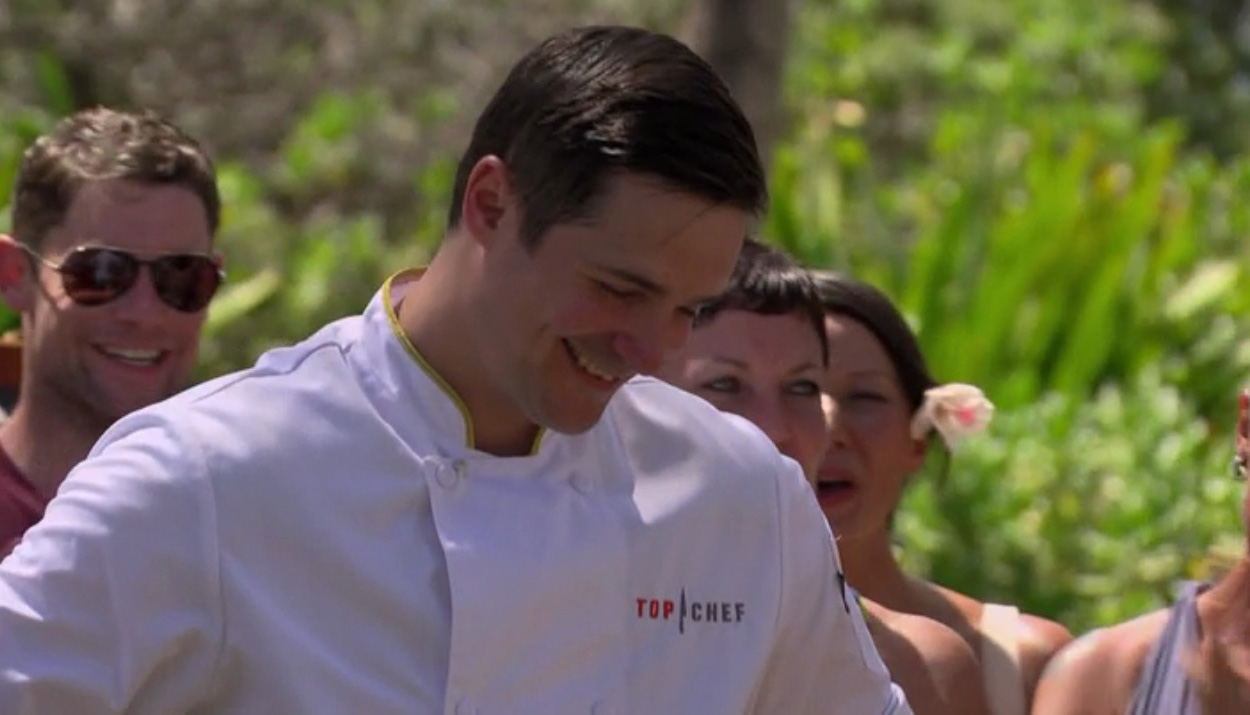 Nick announced at the beginning of the challenge that he knew almost nothing about Spam and despite the finale being in Hawaii he did no research on the product. He makes a Spam broth with pancetta, seaweed, dried shrimp, clam juice, and a quail egg, which sounds like either a decent dish or the end result of the world's worst petting zoo. Thankfully for Nick, it's the former and he wins the Quickfire and $10,000. 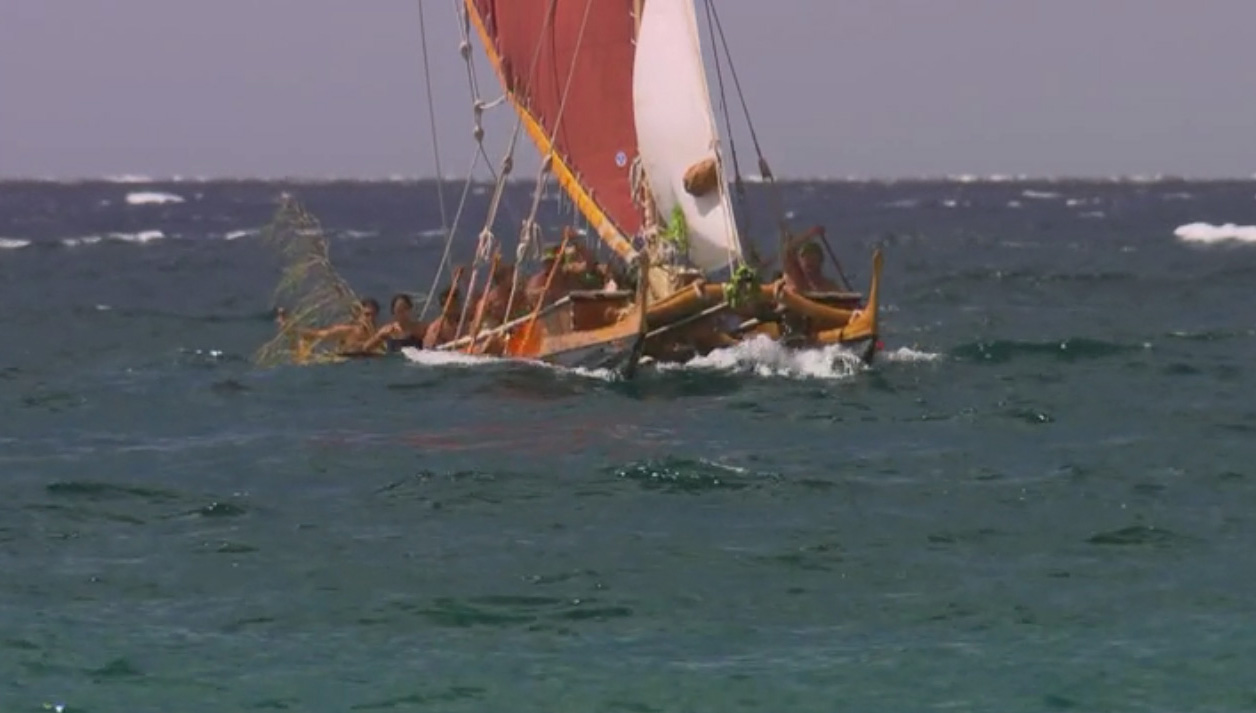 To explain the Elimination Challenge, the judges launch into what seems like a long and unnecessary discussion of Hawaii's history and the importance of the outrigger canoes in getting supplies to the island. These supplies are known as canoe crops and include about 24 species of plants as well as fish, chicken, and pigs. For their challenge, the chefs must create a dish using only canoe crops, which were oh so conveniently being brought over on an outrigger manned by men in loincloths.

Of course, there is a twist to the challenge. I figured it was going to be something like, "The only heat source you can use is the running engine of a Toyota Corolla." But no, the chefs can use regular cooking surfaces. The actual twist is that not one but two chefs will be going home, and the remaining two will advance to the finale. 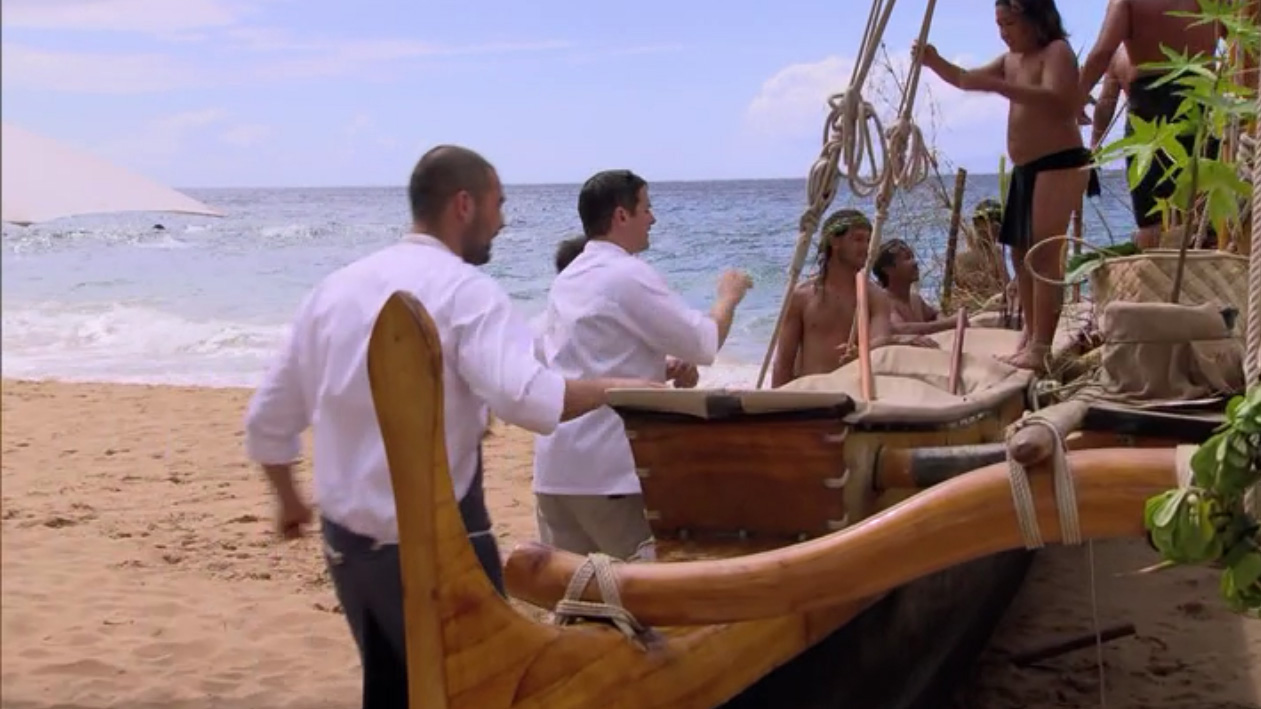 The chefs race to the canoe to grab their canoe crops to start planning their dishes. Nina, being from the island of St. Lucia, feels comfortable with most of the ingredients as they are fairly similar to what she grew up with. While she, Nick, and Louis opt for fish as their proteins, Shirley breaks the mold and goes with pork. Feels like a good move. 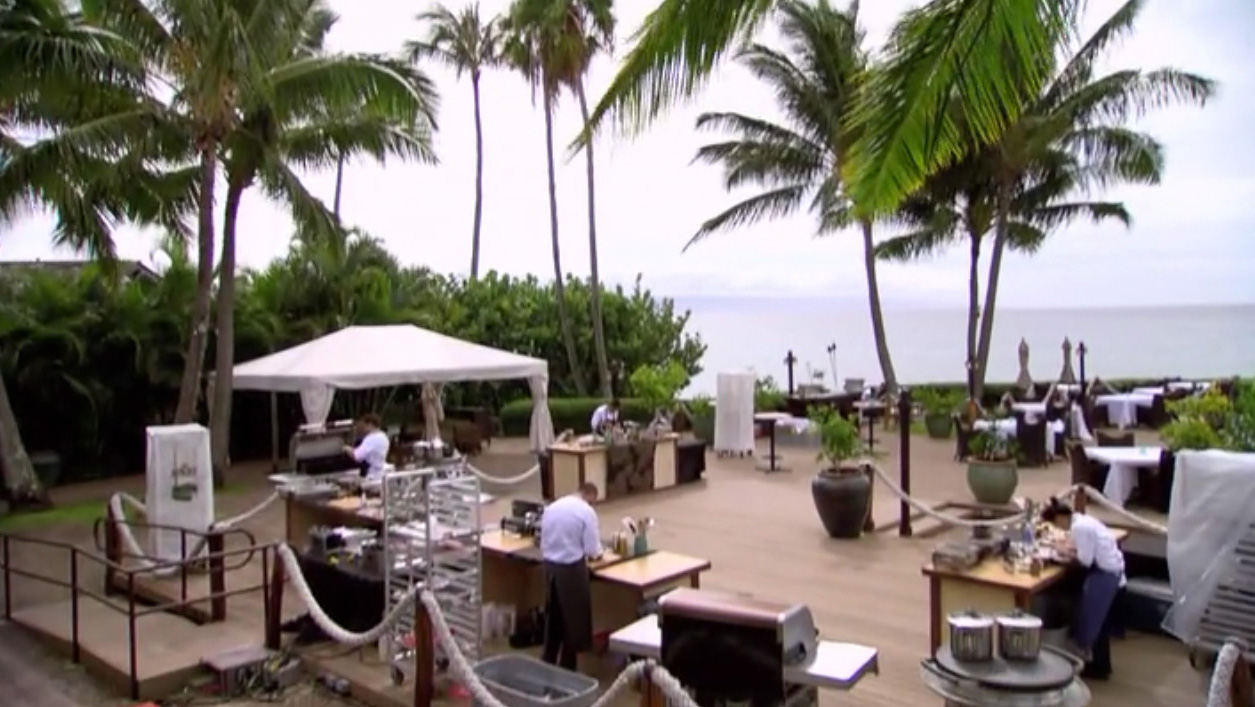 For the second day of the challenge the chefs have stations outside once again. I do not understand why they are constantly cooking outside or in tents. Did Bravo blow the whole budget on jumpsuits for Padma and irrelevant celebrity guests? Give the contestants a goddamn kitchen to cook in. 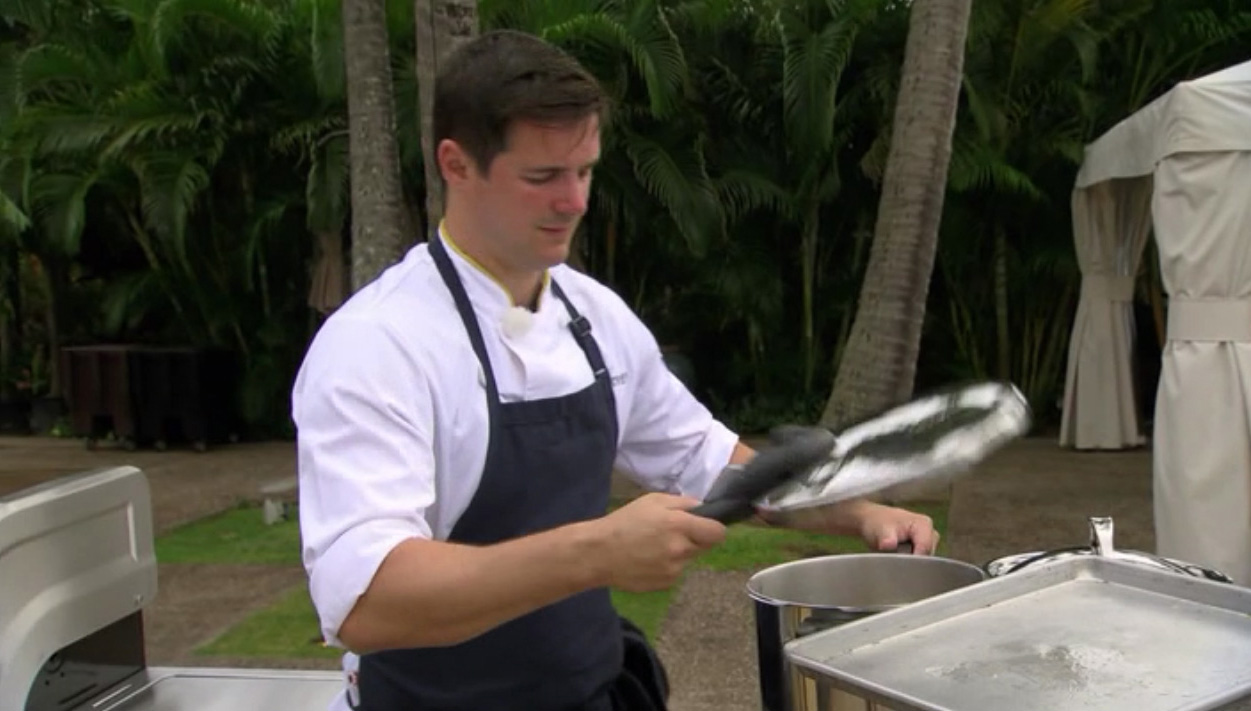 Tom visits the chefs to check in on each of them. Nick screams for a pressure cooker and it's like Nick you ARE a pressure cooker. See what I did there? Man, we're really having fun here. Tom chats with Louis and reminds him that last year Kristen Kish came back from being knocked off rather early, won Last Chance Kitchen, and then won the whole thing. He also tells the chefs that the winner today not only moves on to the finale, but will also have an advantage during that challenge. 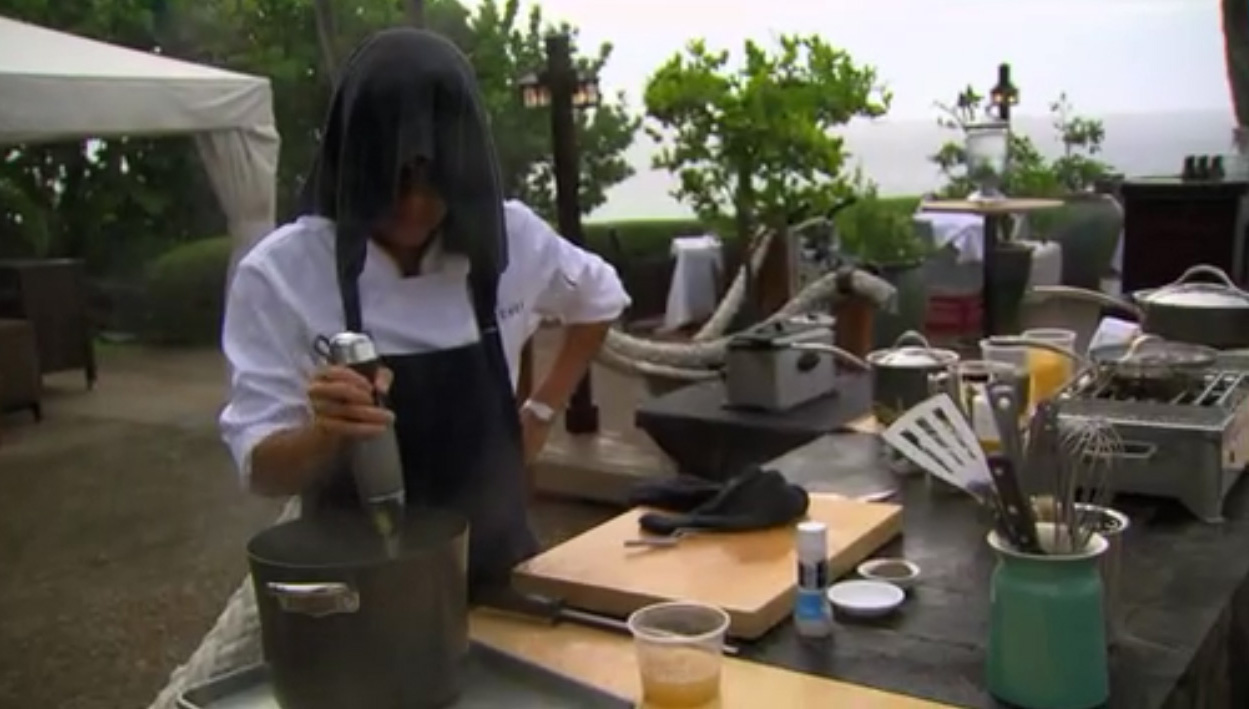 Everyone is on track when all of the sudden they feel one or two raindrops and then heavy rains comes down on the uncovered patio where the chefs are cooking. Being chefs, they are all worried about the food, but all I could pay attention to was the fact that Nina was using an electric immersion blender IN THE RAIN. How is she alive?

I can't believe the producers were able to add the twist of actually making it rain. I mean, I barely believed they could harness the star power that is Jon Favreau, now they are controlling the weather? Is there anything Andy Cohen doesn't have his hand in at this point?

Thankfully, as quickly as the storm appeared, it was gone and things were back on track. The guests and judges arrive including a very pregnant Gail Simmons. I had no idea how long the break was between the last challenge in New Orleans and the finale in Maui, but I figured something like a few weeks maybe. Nope, apparently more like six months. 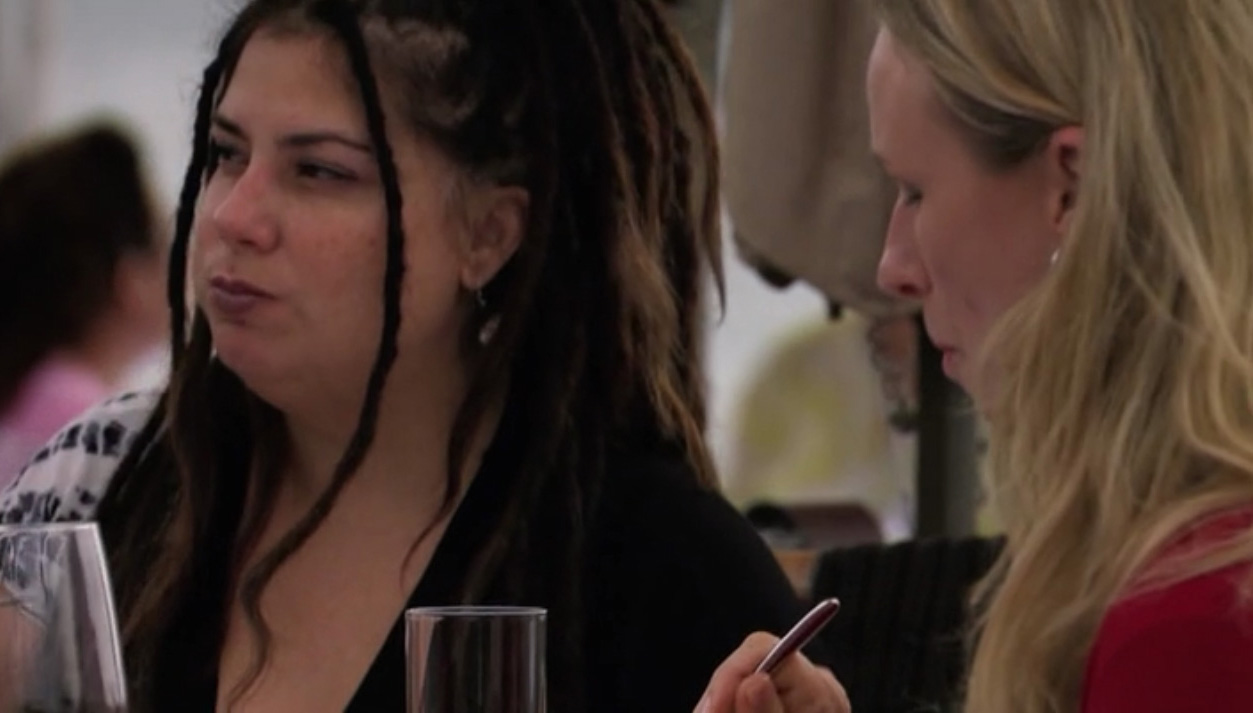 Diners start visiting the stations for service. It's pretty shocking. For a fine dining restaurant there are more white people with dreadlocks than an upstate New York Phish concert. 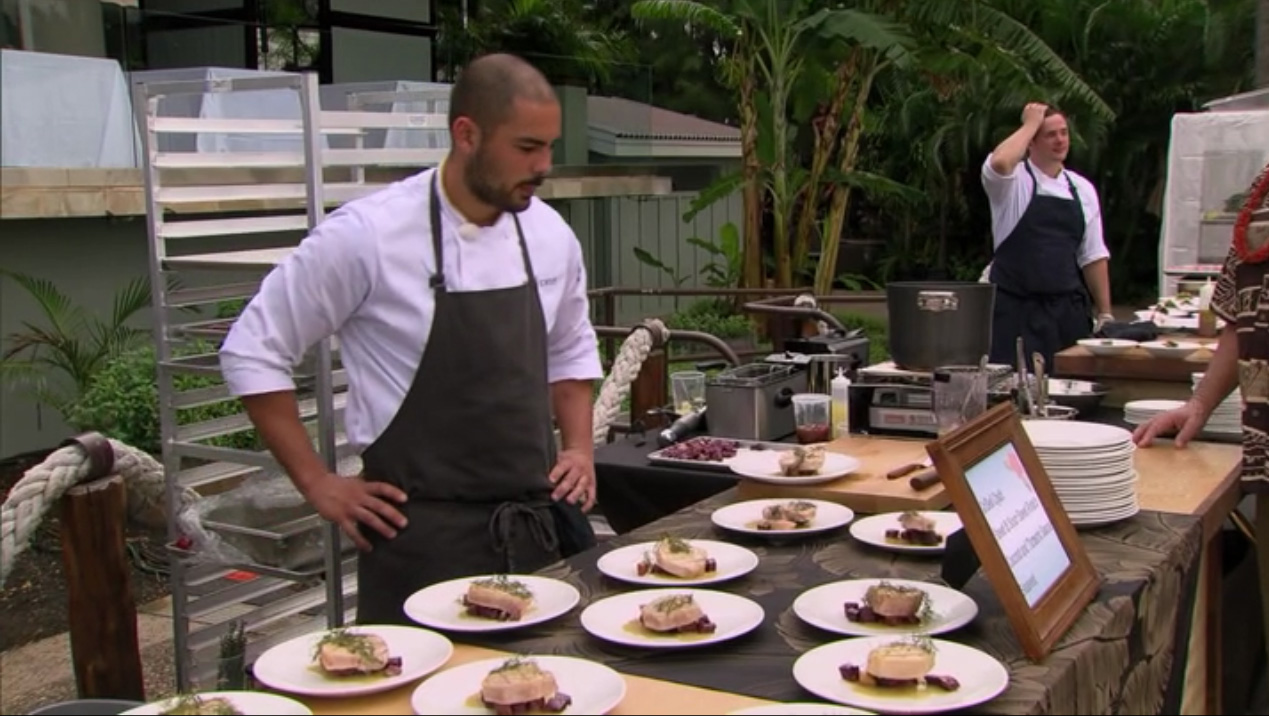 First for the judges is Louis. He prepared grilled opah with sweet potato and coconut sauce. Chef Choy enjoys the dish and the way that Louis used the canoe crop ingredients together. Despite the great flavors, the judges found the fish to be cooked inconsistently, which is surprising from Louis who was nothing but consistent in winning all of those Last Chance Kitchens. I think his dish sounded flawless, but that's probably just because opah sounds like Oprah and she is pretty much my religion. 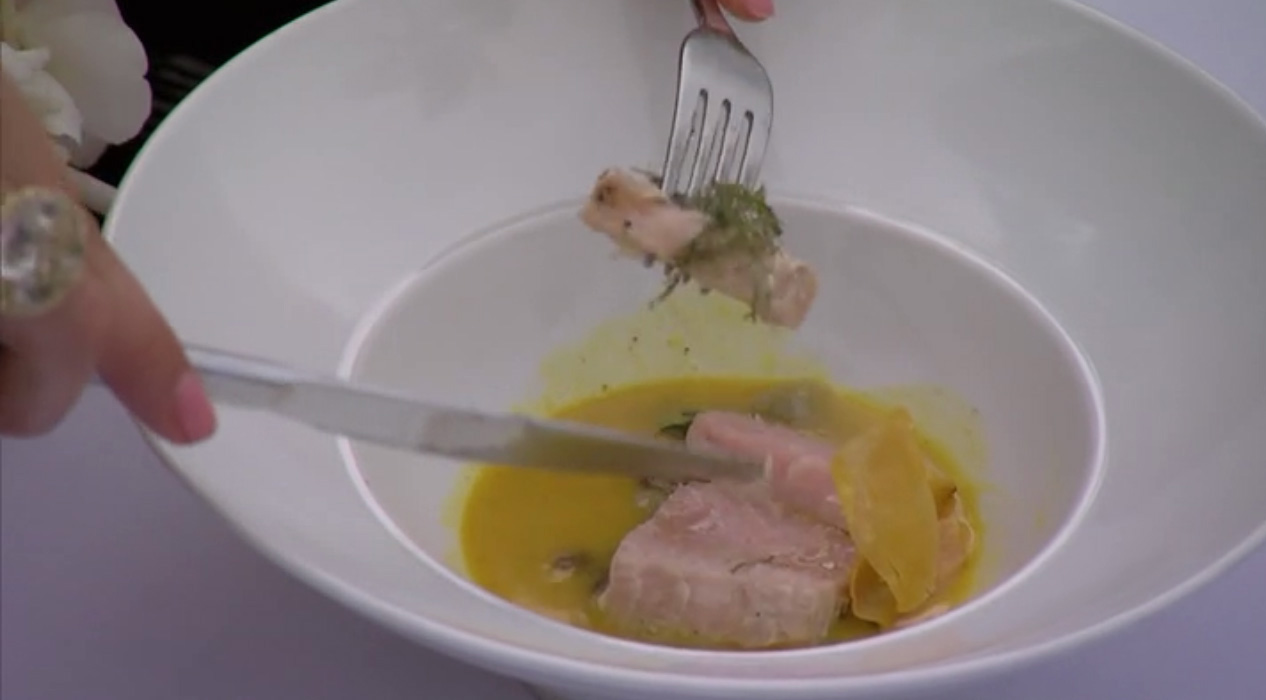 Next is Nina, who used the same fish as Louis and did grilled opah with taro root and coconut puree. Padma loves how it looks but makes no comment on the content of the dish, so she now knows how we feel about her. Tom loves it and Gail is especially pleased that she used the breadfruit. Being pregnant I figured Gail would just be all about pickles and ice cream, at least that's what I know from television and movies. I have no idea, I'm nowhere near having a kid, I can't even care for myself. I mean, for lunch today I had a Diet Coke, a bag of Peanut M&M's and half a bar of Xanax. 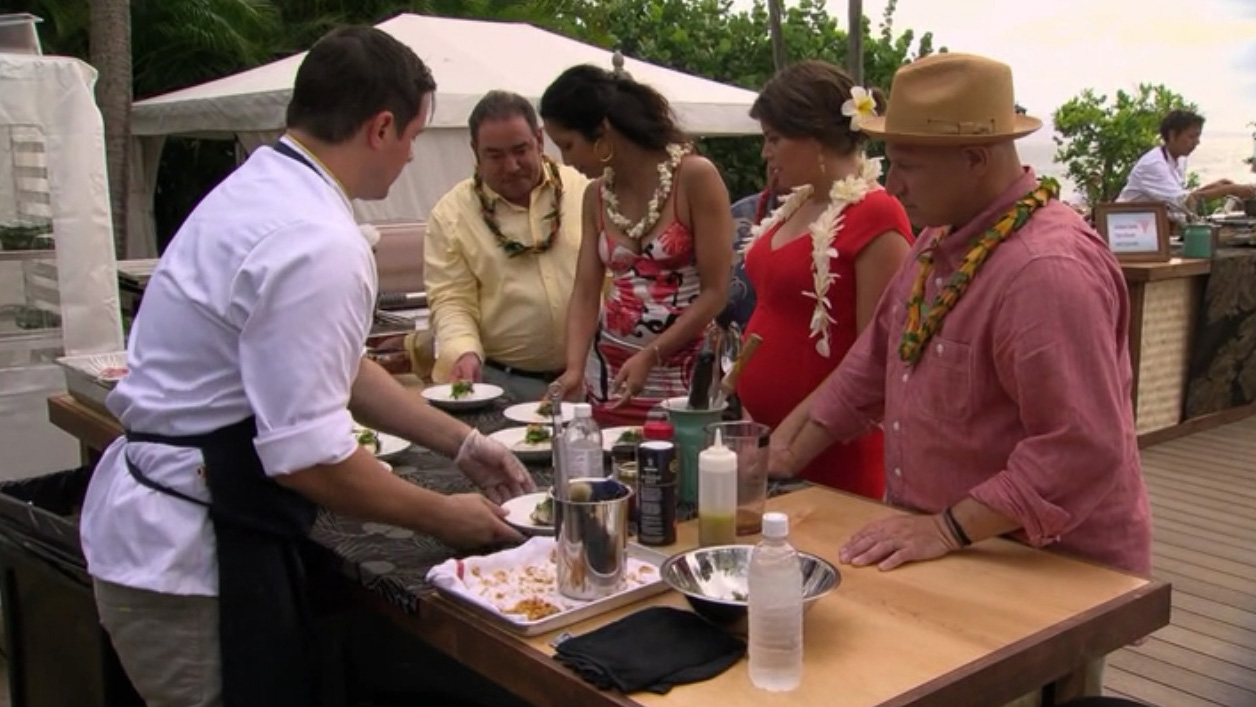 Nick's opakapaka with jalapeno and crispy chicken skin is a departure for him since he notoriously under seasoned his dishes in the past. And honestly, it's the first dish of his that I saw and thought, "Ugh, I want that right now." The judges overall think it's a successful dish and that perhaps the time in Hawaii relaxed him a bit. He still seemed like a petty, uptight nightmare in the kitchen. Then again, if someone was editing footage of me they could easily make me look like something I'm not. Like a well-adjusted, functional adult or something. 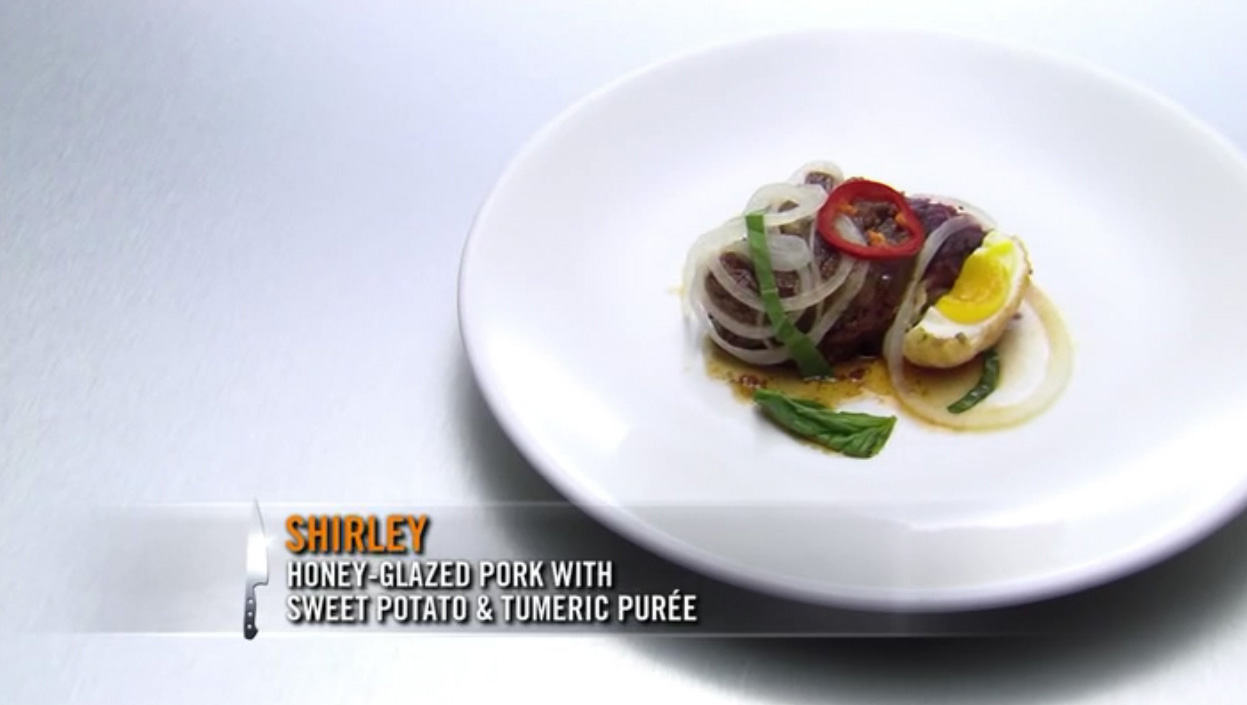 The last dish of the night is Shirley's honey glazed pork with sweet potato and turmeric. Everyone agrees that the meat was perfectly cooked and the sauce was nice but that the glaze is a bit too sweet and the honey may have been a little much. 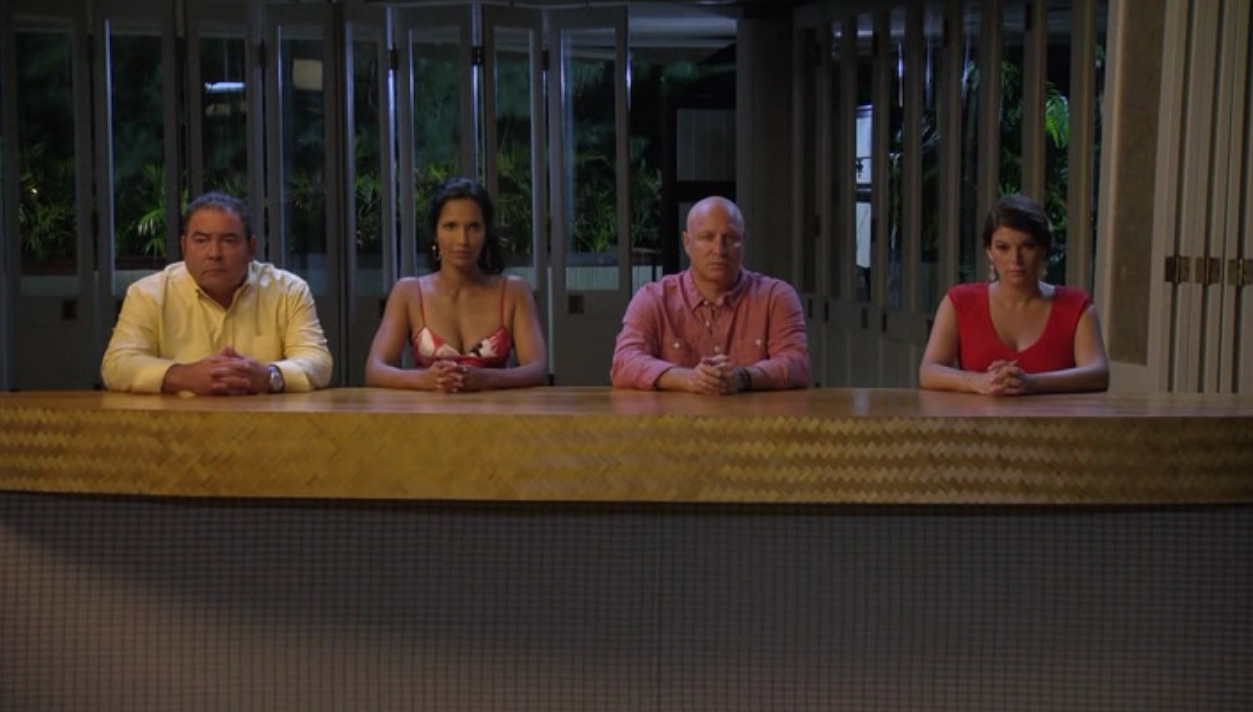 This is a tough Judges' Table and of course Padma calls all four of the chefs back at once. Shirley starts crying right off the bat as if she's me on a third date. She said that she was happiest cooking on Top Chef and hopes it showed in her dish. The judges are overall extremely positive about all of the contestants, making it difficult to figure out who I think will move on and who will go home. 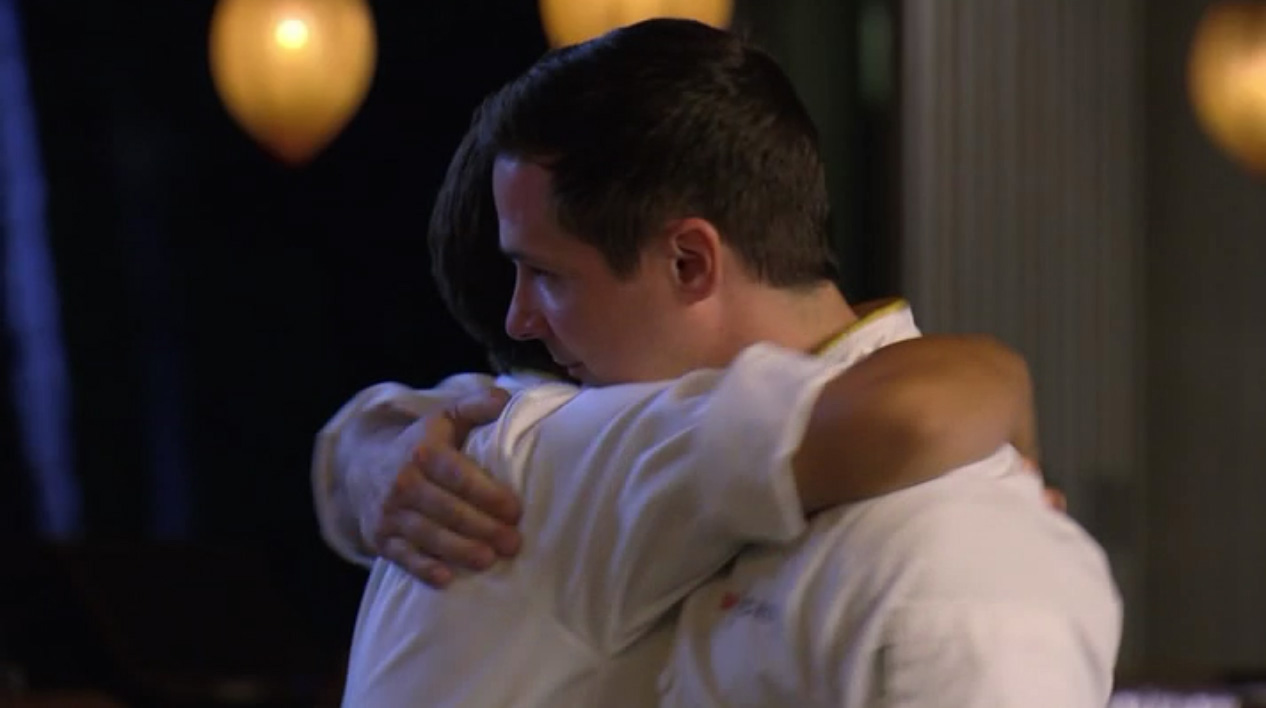 The winner of the challenge, the person advancing to the finale and getting an advantage there is Nick. It's hard not to feel like the producers have been pushing Nick to make it to the finale, though that other spot could be anyone. 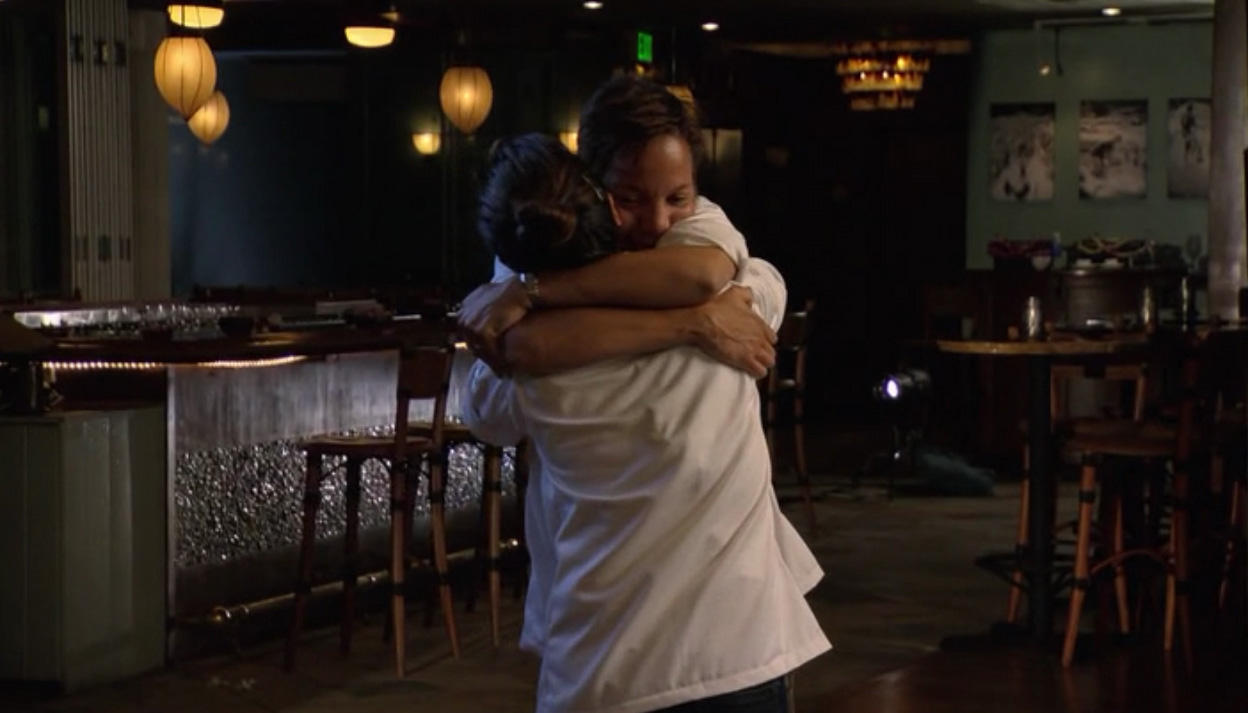 After the judges discuss, it's clear that it couldn't be anyone, and that it obviously has to be Nina. Sadly, Louis and Shirley are sent back home, their relationship with Top Chef couldn't withstand a vacation.

So there we have it, a Nick and Nina finale. I think we all saw it coming from a mile away, but it's still tough to see Shirley go home after so many crucial wins and for Louis to crush everyone week in and week out in Last Chance Kitchen only to be sent packing.

I'm sure next week will be full of stress, screaming, and plenty of surprises. It'll be our last time together (for now) and if it's anything like my last time with most people in my life, it will involve me drinking too much wine and offering some last ditch sex before saying, "Whatever, I was done with you anyway." Should be a good time!

Next Up In Hawaii