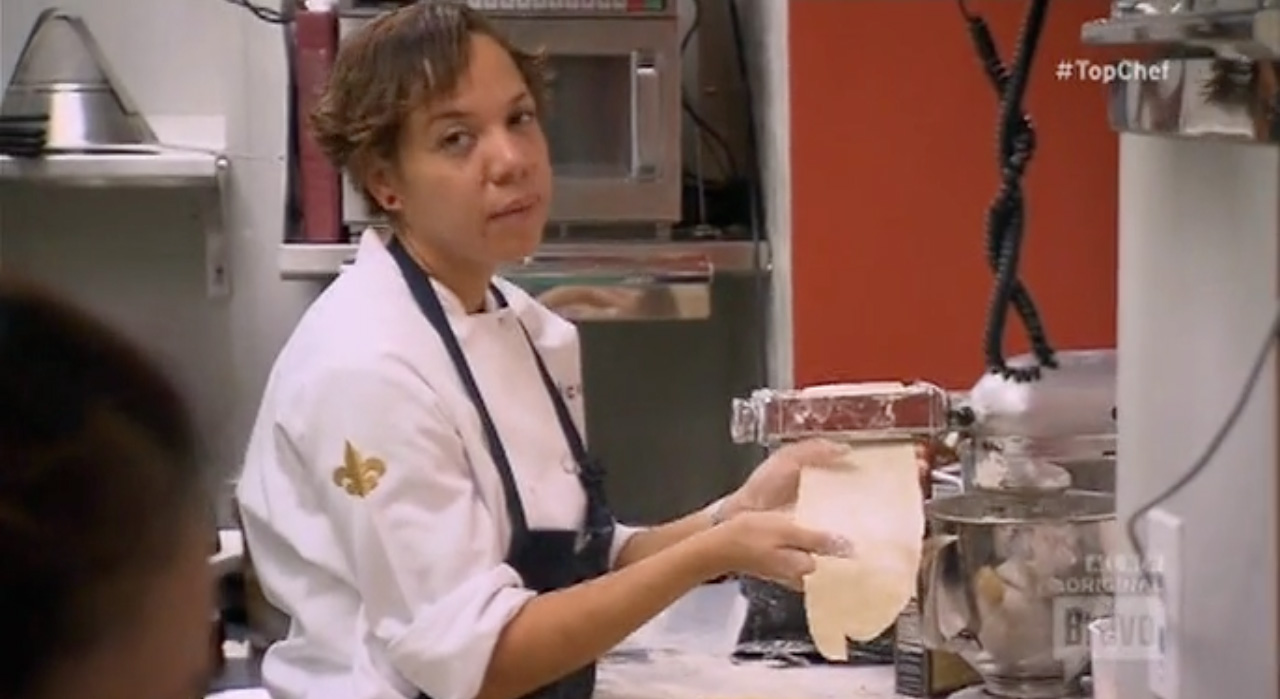 Well, we're 14 episodes in and Top Chef is finally acting more like a reality show, though without as many drunken screaming matches that require closed captioning and overuse of the phrase "do not disrespect me." Shirley Chung starts this week the way I end most dates, by crying. She's upset after last week, Stephanie Cmar was unfairly sent home because Nick Elmi's immunity meant he got to stay even though he served unquestionably the worst dish of the night. The mood of the kitchen is tenser than when I realize the woman before me at Starbucks used all of the skim milk. 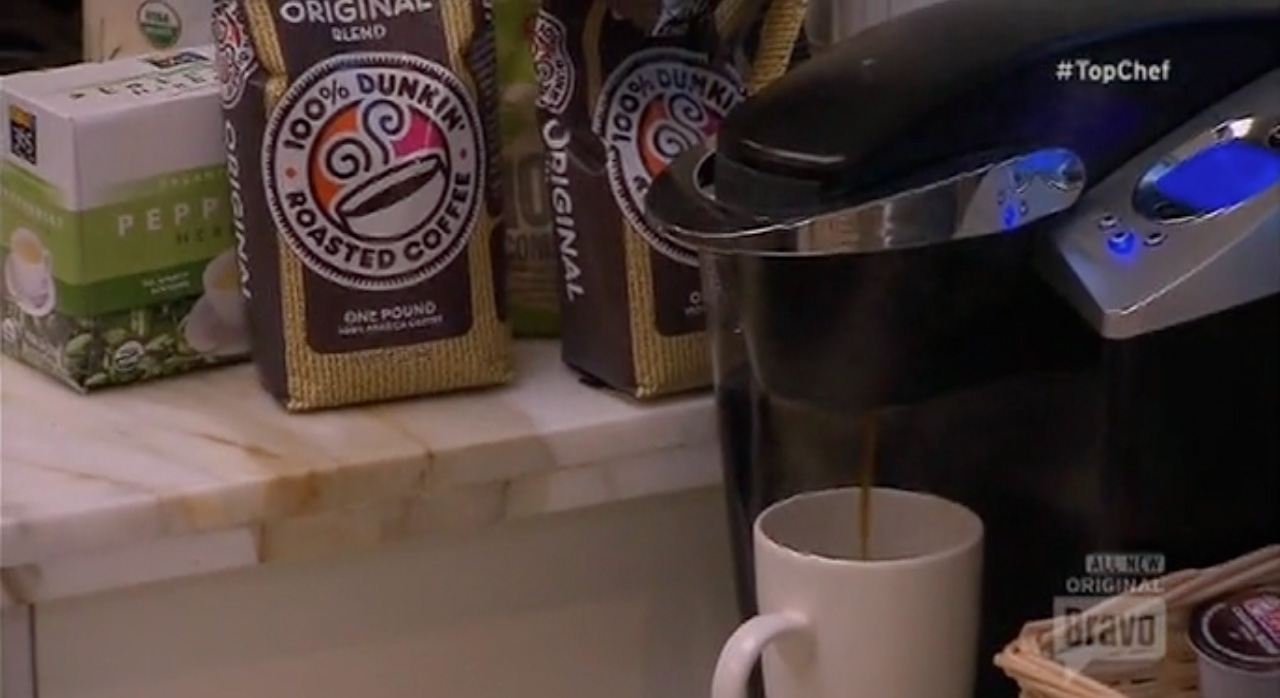 Thankfully, Bravo knows that if there's anything that can cut tension it's gratuitous product placement. Carlos Gaytan makes and talks to himself about a delicious cup of Dunkin' Donuts coffee. He's not even brewing actual beans, he's making it right in the Keurig machine. 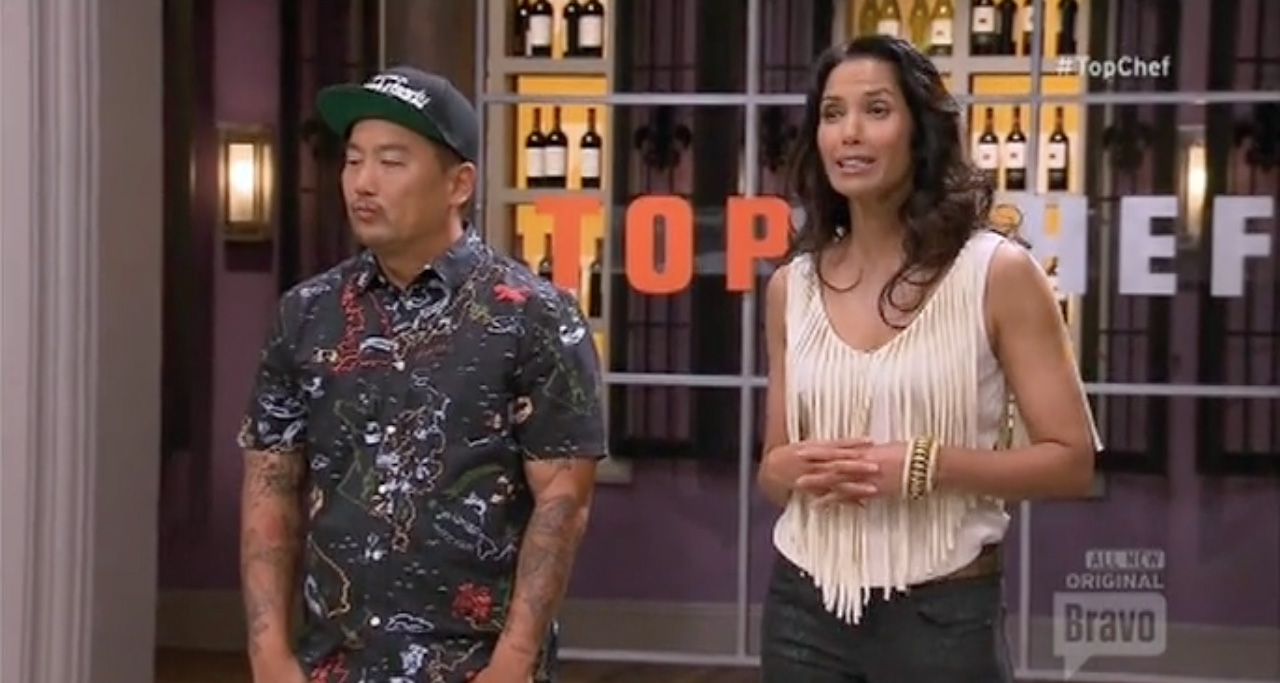 The chefs head to the kitchen, separated from their beloved coffee sponsor, for the Quickfire Challenge. Padma Lakshmi greets them and introduces Roy Choi, a chef who she explains started the food truck movement in LA, though he's dressed more like a bike messenger on his way to a rave. Since Roy is famous for his twist on LA's most notable street food (he's known for his Korean tacos), for the Quickfire Challenge the chefs will have to create their own twist on New Orleans' most notable street food: the po' boy.

Just like last week's shock, this week the winner of the Quickfire will also win immunity from elimination, even though there are only five chefs remaining. Shirley says she is nervous about the challenge because she's trained in sophisticated cuisine and has never made a sandwich. I can't relate at all. I mean, then what do you make 300 of to land a husband? 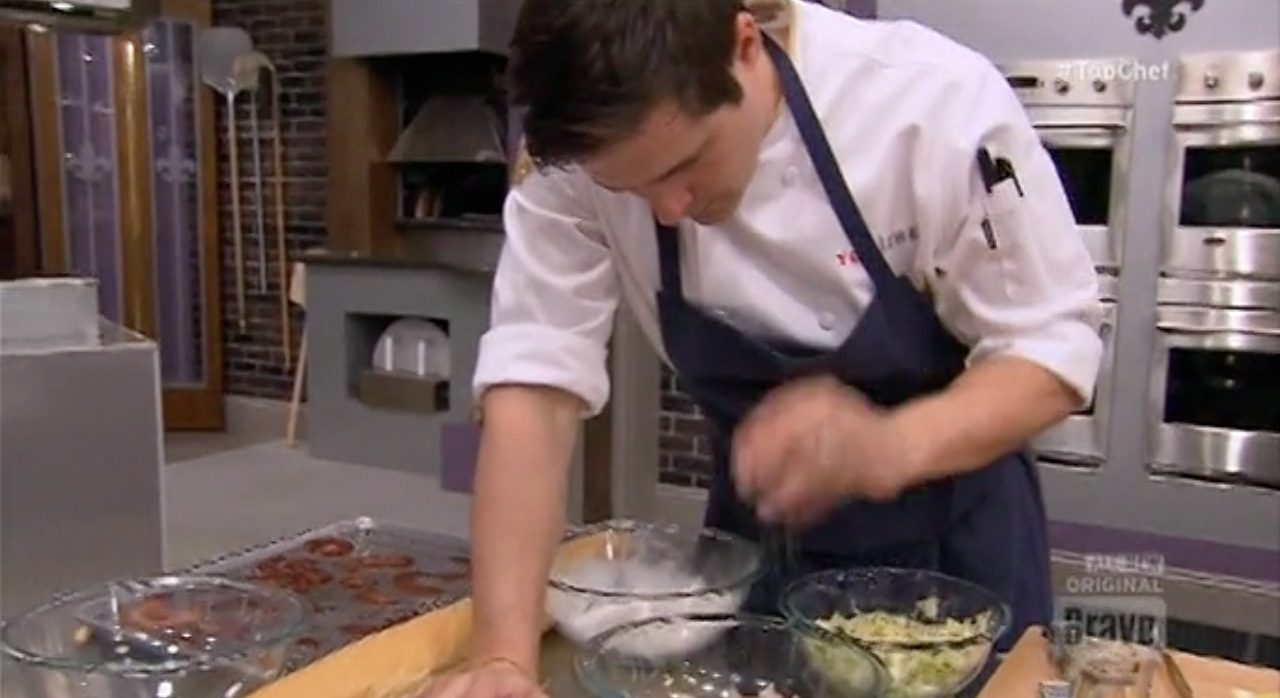 The chefs all try and make versions of the po' boy that reflect either their personal or professional history. Nick does one with fried shrimp and pancetta and fennel as an homage to his time in New England, which I don't quite get besides the shrimp, and shrimp is basically available anywhere. If you're going to really represent New England, do something more specific to there, like clams or elitism. Nina Compton makes a fried mahi po' boy with mojo aioli and pickled onions to represent her Caribbean history. Carlos stuck with what he knows and always does and used al pastor with chiles, pineapple and garlic to create a more Latin-themed sandwich. 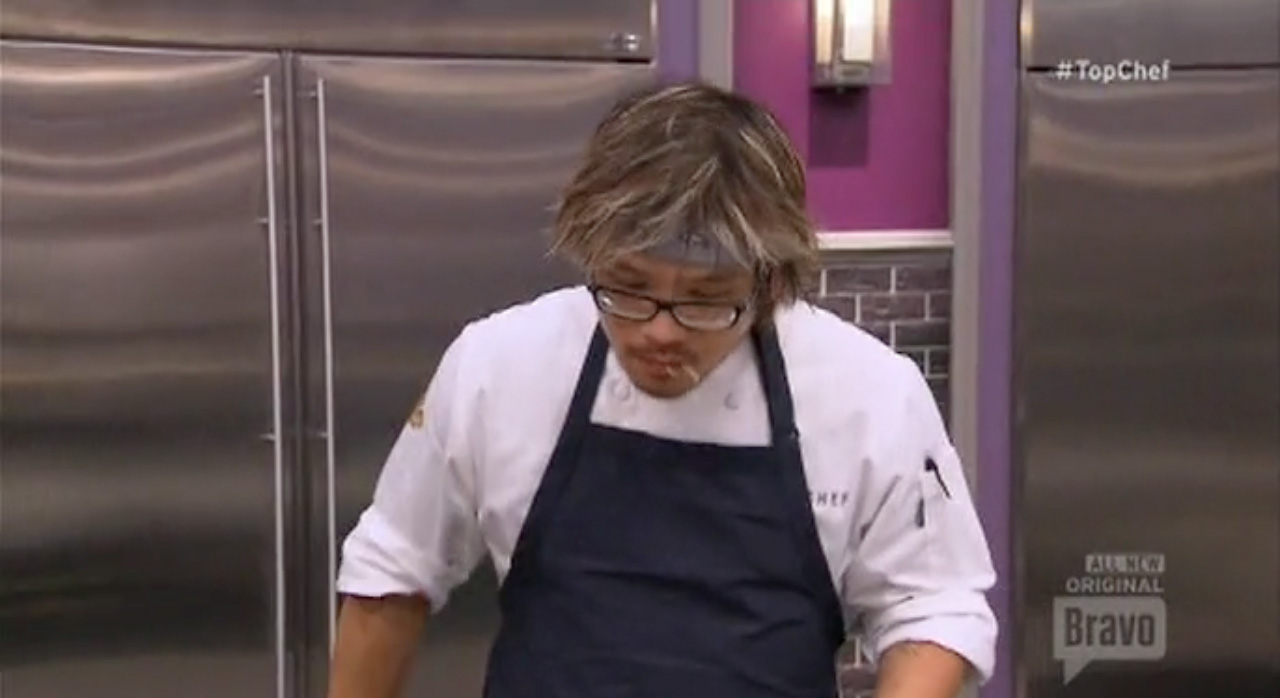 Since both he and Roy are Korean, Brian Huskey thinks he has some kind of edge in this challenge. He makes an an Asian-inspired lobster po' boy with gochujang aioli and yuzu. Brian, both of you being Korean doesn't mean he'll like you more. If that logic worked, then on the basis of us both being Jewish, my college roommate and I would have gotten along. In reality, I still scratched up her Clueless DVD without telling her after she flirted with a dude I had hooked up with at a frat party. 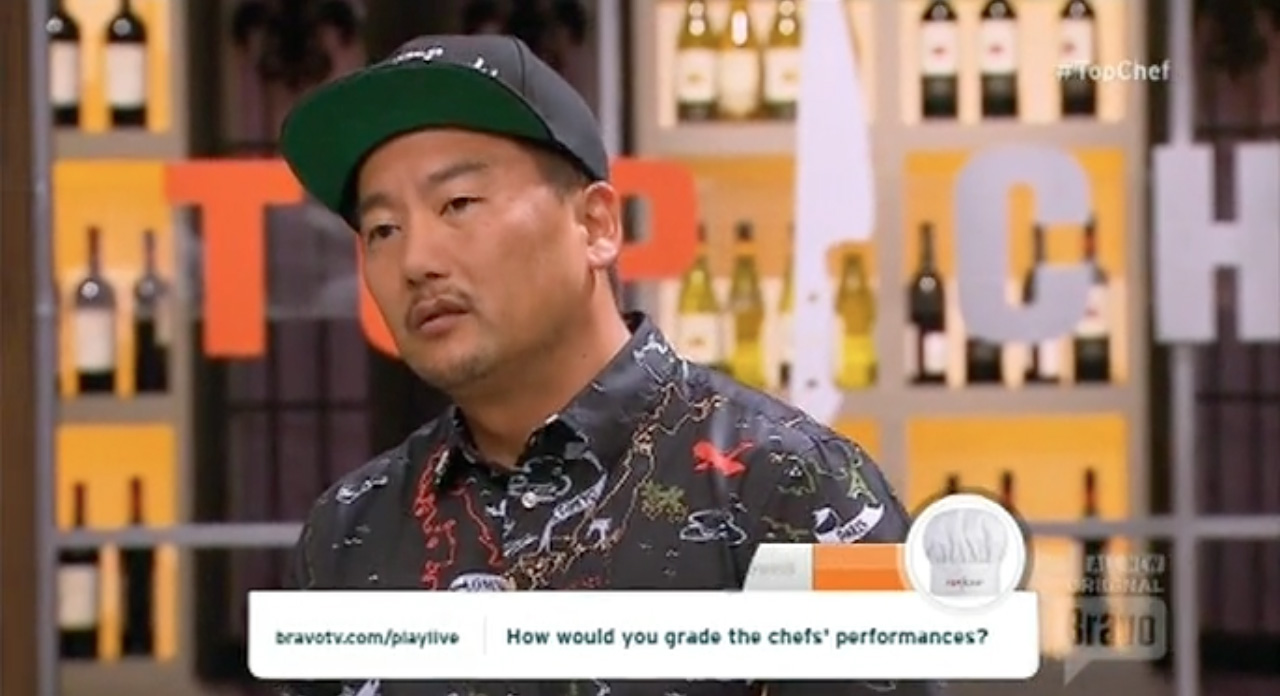 After tasting each of their creations, Roy lays down some harsh truths on the chefs. He says, "Y'all fucked shit up." He thinks they missed the boat entirely. He says to Carlos that al pastor is sacred, especially because he is from LA, and that Carlos's version was just really not flavorful. That's the kind of burn that I think at first doesn't seem that bad, but begins to eat away at you. Like when someone says, "Did you change your hair? It's different," which at first seems like a harmless question but you keep thinking about it and by lunchtime you're in your office bathroom with a letter opener trying to give yourself bangs.

Roy wanted the chefs to cook more from the heart, that they need soul in their food and were thinking too much like chefs. That sounds like a pretty good way to think when you're on a show called Top Chef, but what do I know? For dinner I had an entire bag of pita chips and a Valium. 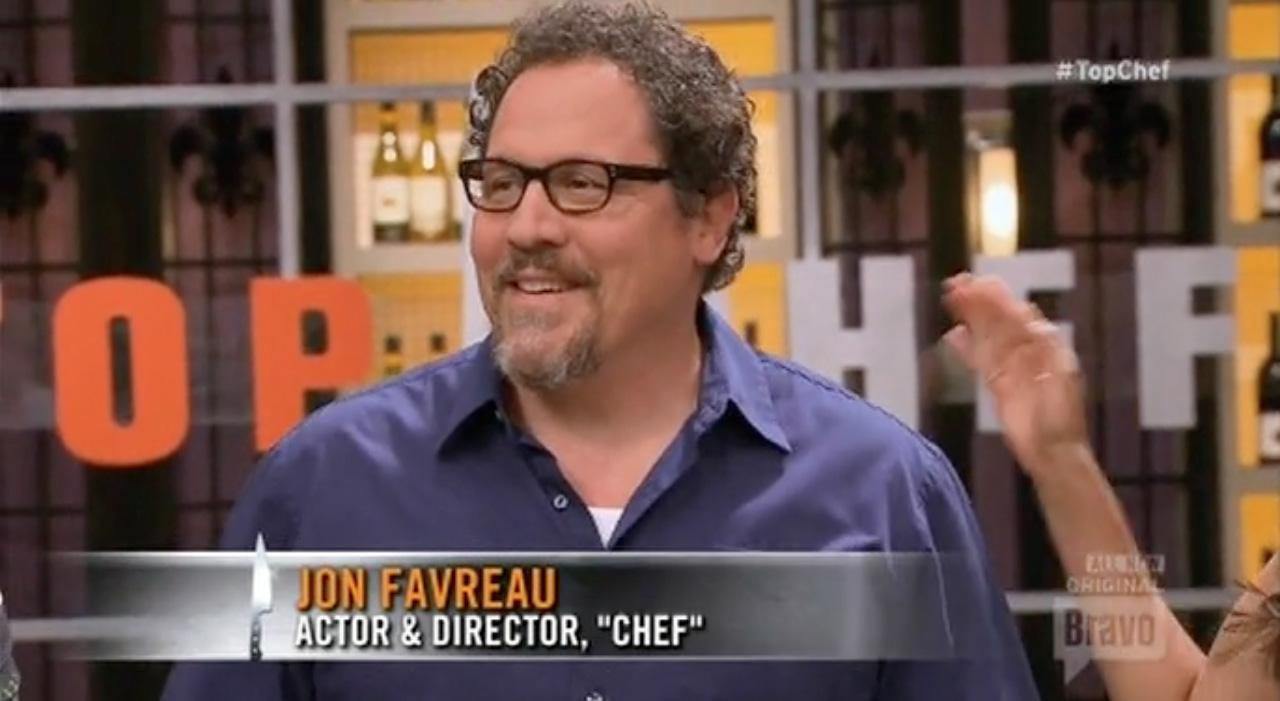 Of all of the po' boys, Roy liked Shirley's the best and she earns immunity from elimination, automatically putting her in the final four. As the chefs are recovering from a verbal evisceration of their life's work, Padma introduces the guest judge for this challenge: actor/producer/screenwriter Jon Favreau.

Nick is super excited because he loves Swingers. Of course you are, Nick, you look like that would be one of your favorite movies. You also seem like the kind of guy who would think that liking that movie puts you in some kind of special group that was on the Vince Vaughn bandwagon before he "sold out."

Jon tells the chefs that their Elimination Challenge is to create a dish using only what they find in Dumpsters in the French Quarter. KIDDING! Oh man, great joke. Comedy professional right here. The actual challenge is inspired by the work he's done on his movie Chef, which follows a chef who has lost his passion in his cooking and takes his son on a trip in a food truck and rediscovers his culinary voice. I liked that movie more the first time around, when it was called Guilt Trip. For the challenge, the chefs must create a dish inspired by a turning point in their careers that made them realize their culinary voice. 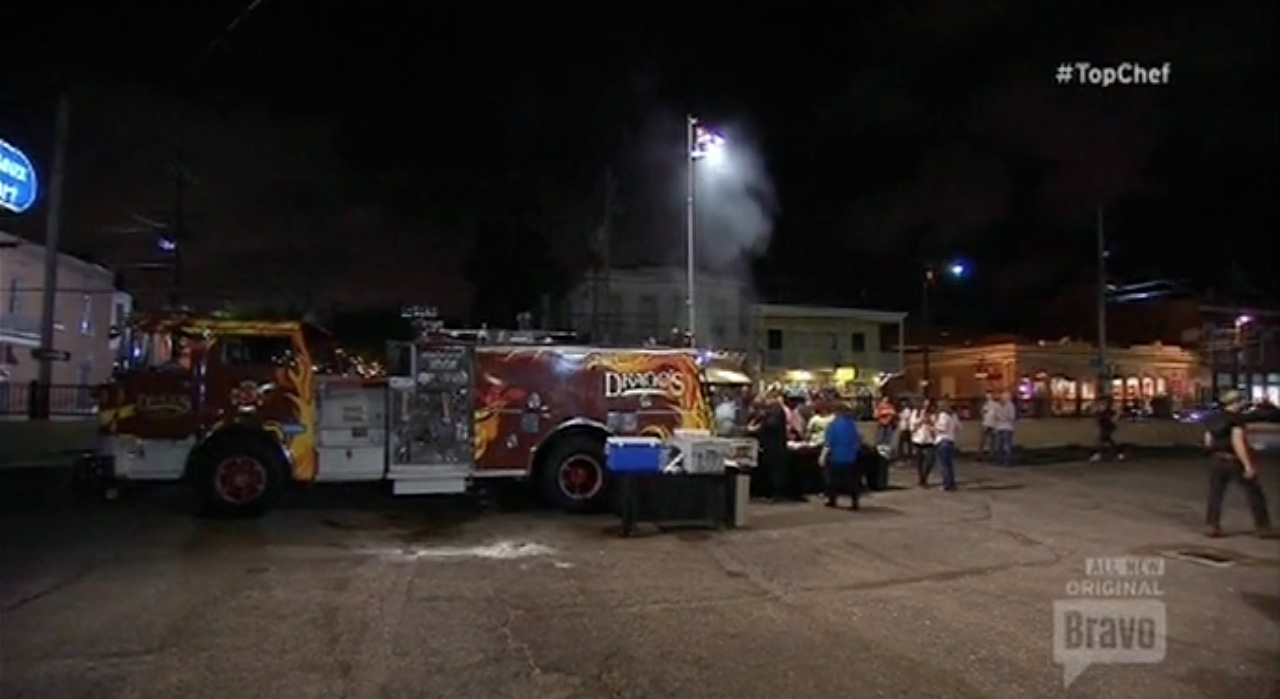 For research, Jon invites the chefs to join him, Emeril Lagasse, and Gail Simmons at local food trucks. I can't really tell if they are actually at food trucks because there aren't any hipsters around them judging the crap out of everything, but maybe New Orleans is different. Shirley reveals that her culinary reawakening came during Top Chef on the Vietnamese challenge. She thanks Emeril, or "Uncle Emeril," as she adorably refers to him, for being responsible for her finding her voice. 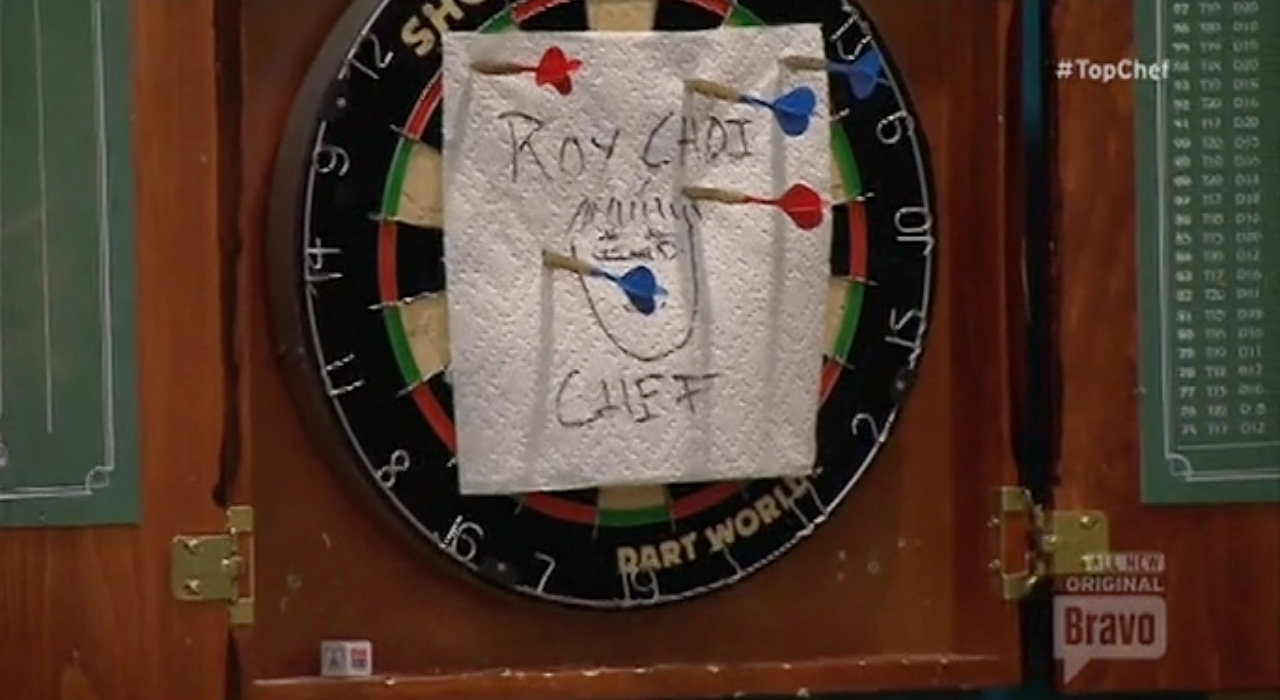 Back at the house, Carlos draws a picture of Roy on a paper towel, puts it on the dartboard, and begins hurling darts at it for each of the criticisms he received. I would do the same with a picture of my family, but I would very quickly run out of darts. 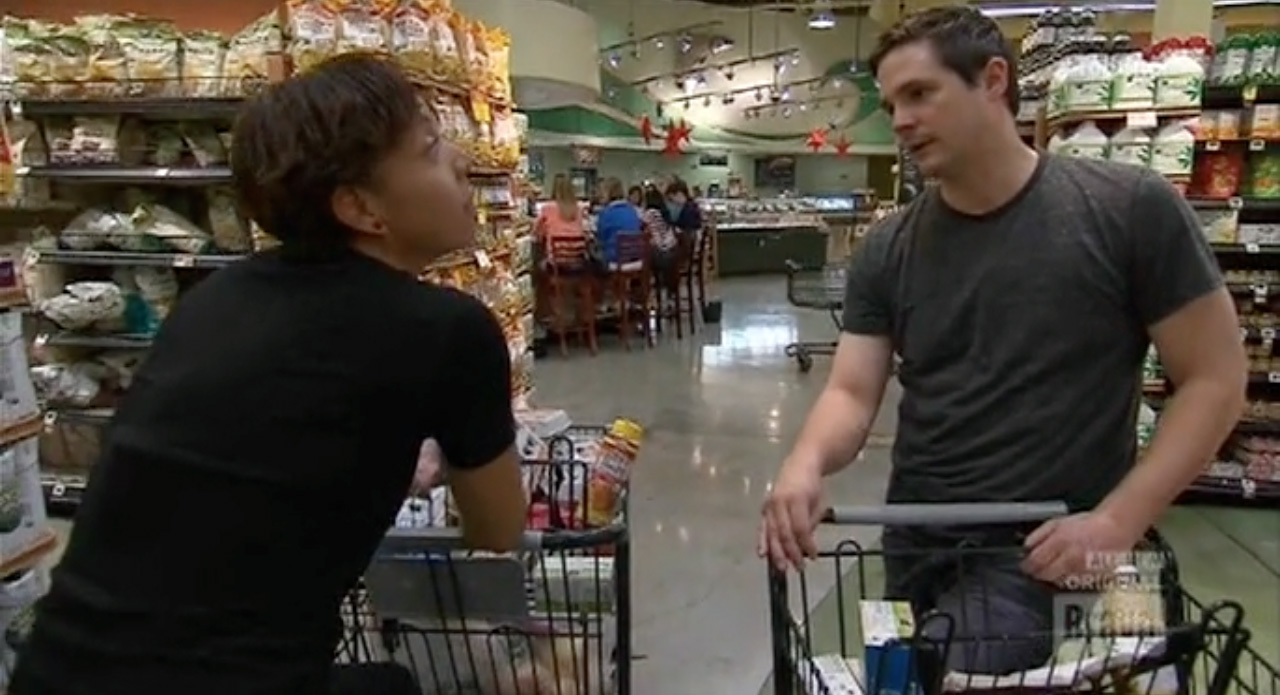 At Whole Foods the chefs are all running around grabbing ingredients. It's always jarring to see them in Whole Foods because even though it looks the same, the store is barely recognizable to me without 200 people pushing around carts while on their phones and girls in leggings and oversized sunglasses yelling to each other about which Kombucha is the best post-Soul Cycle. While shopping, Nina notes that Nick over-thinks things and has a short fuse, which is a lethal combination as a personality, but it's reality TV heaven. 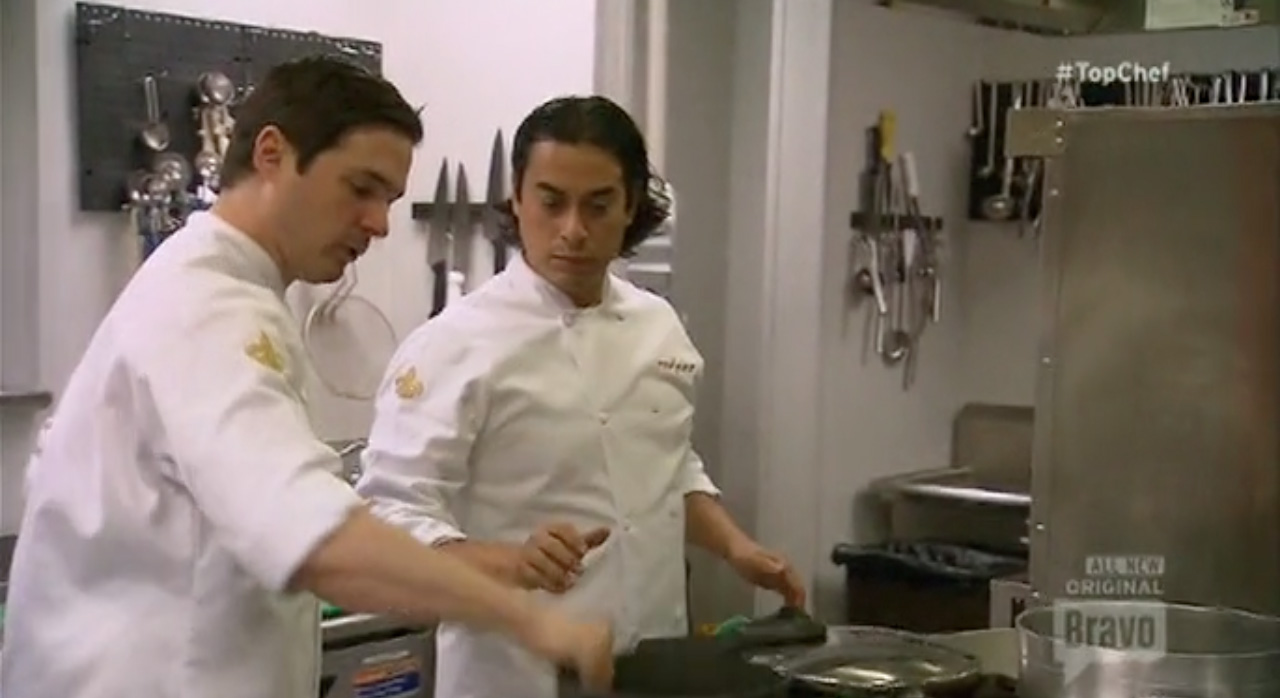 Nick gets in the kitchen and starts to set up, marking his territory on the cooktop with his pots like a dog peeing on the lawn. Barely 20 seconds into the challenge and Carlos starts to move those pots trying to find room for his own and Nick blows a gasket. He's screaming at Carlos, "Don't move my pot. If someone moves my pot again we're going to have a problem." It's intense, and is roughly the same level of anger I reach when a bartender tries to take my drink before I'm finished. I'm pretty sure I can get another noisy straw sip out of this $15 nutmeg and blood orange old fashioned, something that would be easier if you didn't use this stupid large format ice. (Confession: I went to an obnoxious cocktail bar recently where they prided themselves on creative mixology and wouldn't serve me my "usual," which is a pint glass full of cheap bourbon.) 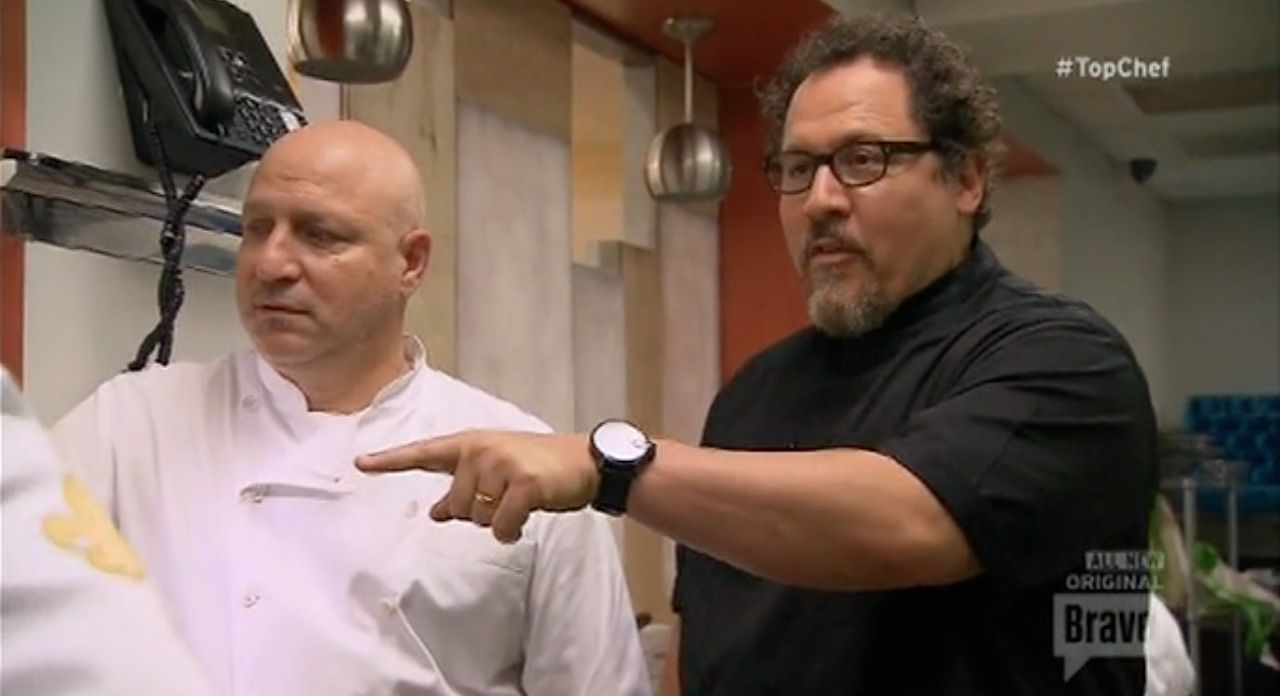 Where were we? Right, Nick is flipping out. Brian is, for some reason, repeatedly saying, "Git 'er done," and Carlos is passive-aggressively working around Nick. It looks fun. Nina notices that because the kitchen is so hot her pasta isn't working like she wanted, and she switches from stuffed angliotti to fettucine noodles. She explains this to Tom Colicchio and Jon Favreau (which Nina pronounces like Favre) when they take a walk through the kitchen, and they both seem worried about her dish. 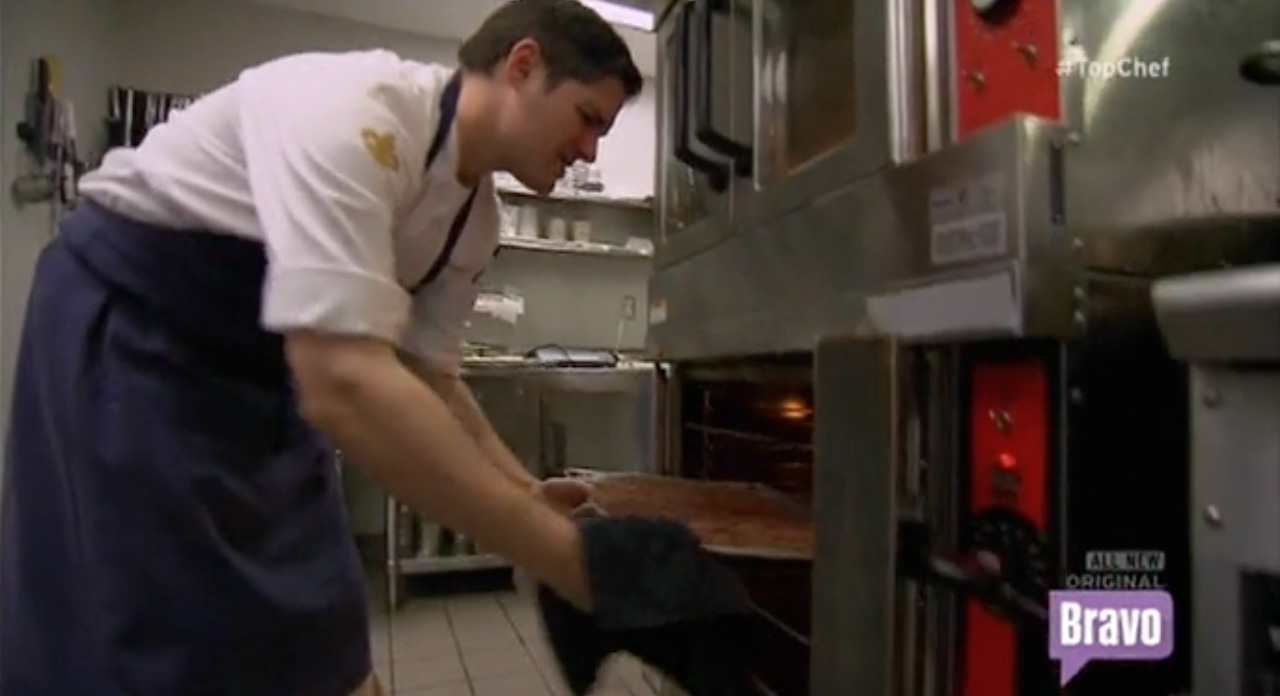 Nick is making a carrot and tuna dish and decides, smartly, that it needs some texture. He puts some quinoa in the oven to bake at a low heat, but as soon as he smells it burning he pulls out the blackened quinoa to see the oven was set to 550, though he wanted it at 275. Instead of assuming he made the mistake (as the Bravo editors lead us to believe by showing the oven temperature being 550 shortly after he put the sheet in), he immediately goes into "it's not my fault" mode and assumes that someone — probably Carlos — tried to sabotage his dish. 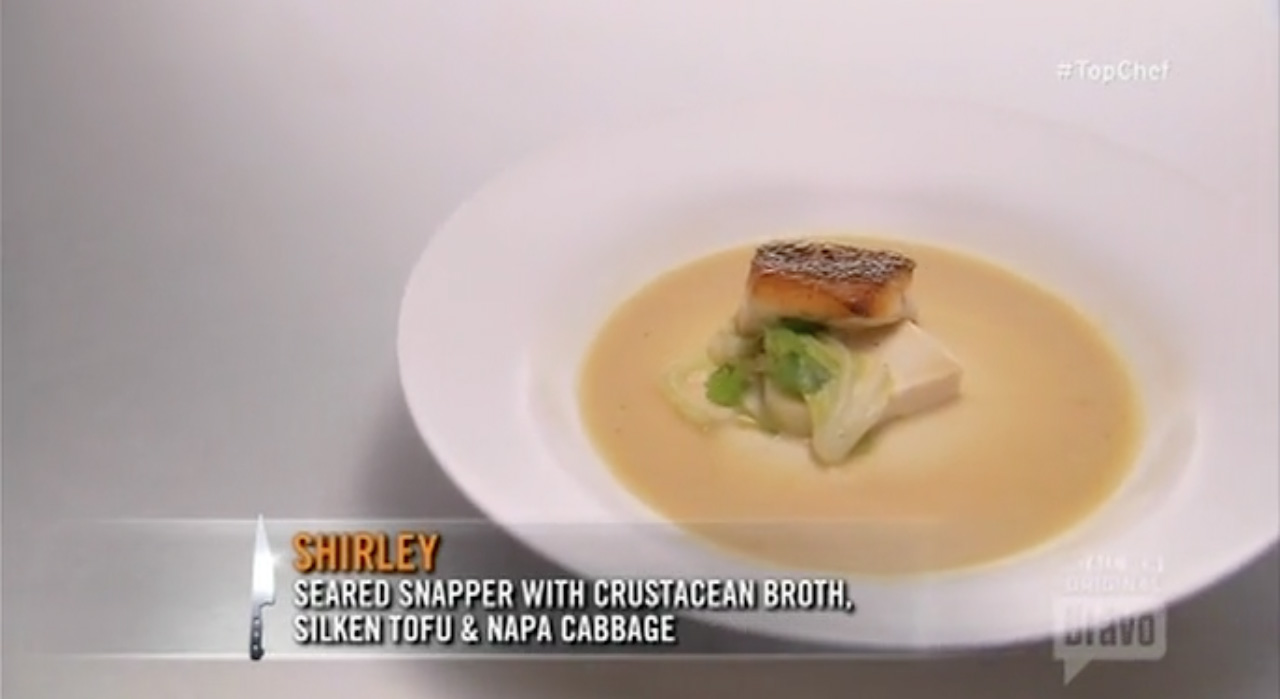 The judges arrive at Cafe Reconcile, the charity where kids can get off the street and instead learn to cook and work in restaurants. Shirley serves seared snapper with crustacean broth, silken tofu and napa cabbage. They all love it, even the teens working there, which is impressive considering that the average teenager has no interest in a tofu, and cabbage dish. 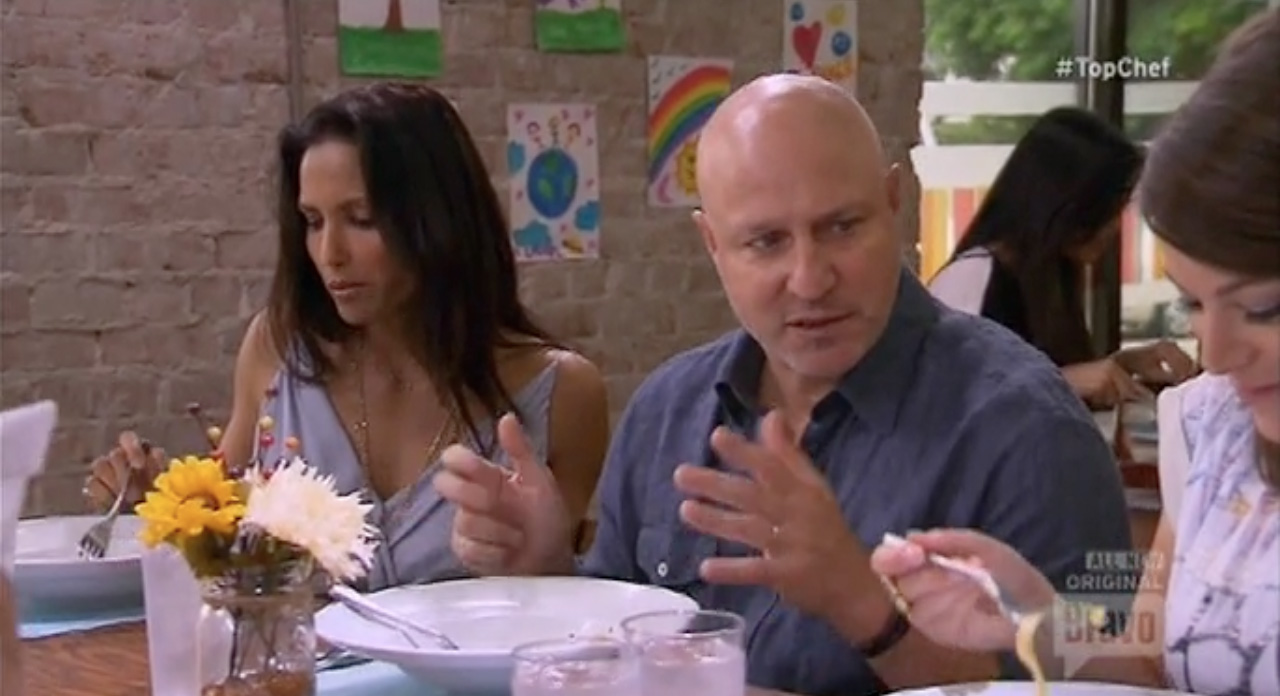 Nina's fettuccine with charred calamari, pine nut gremolata, and crab meat also wows the judges, specifically with her perfect pasta. Brian is next and presents his chicken anticucho with twice-cooked potatoes and feta walnut pesto. While the judges like the flavors a lot, they cannot get past the fact that he served a boneless, skinless chicken breast. That's about as exciting as your friend from high school posting that she's pregnant with her third kid on Facebook. Yawn. 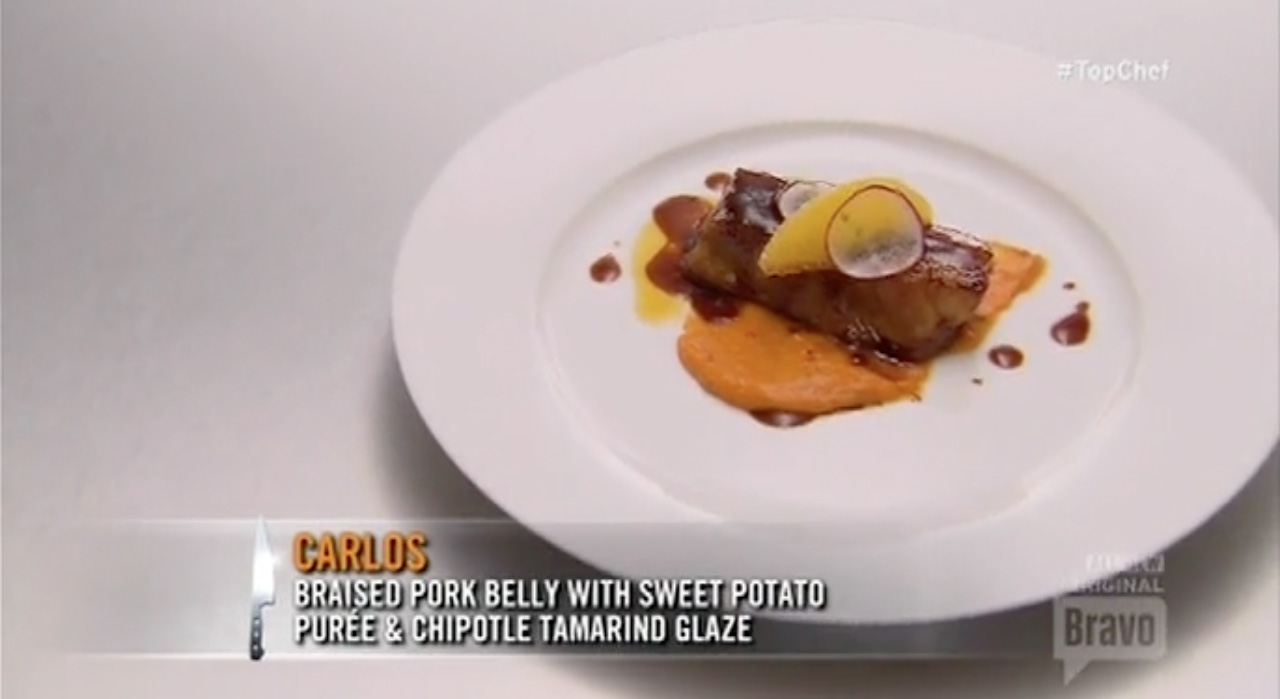 Another favorite of the judges is Carlos with his braised pork belly with sweet potato puree and chipotle tamarind glaze. The last to serve is Nick, who made yellowfin tuna with several preparations of carrot and fennel pollen dust. Last week he made the corn silk that Tom likened to the hair you pull out of a shower drain and now he's serving something with the phrase "pollen dust." What do you plan to make for the finale, Nick? A plate of dead bats? The judges end up liking the carrot flavor, but the tuna is severely under-seasoned and the dish overall lacks texture. 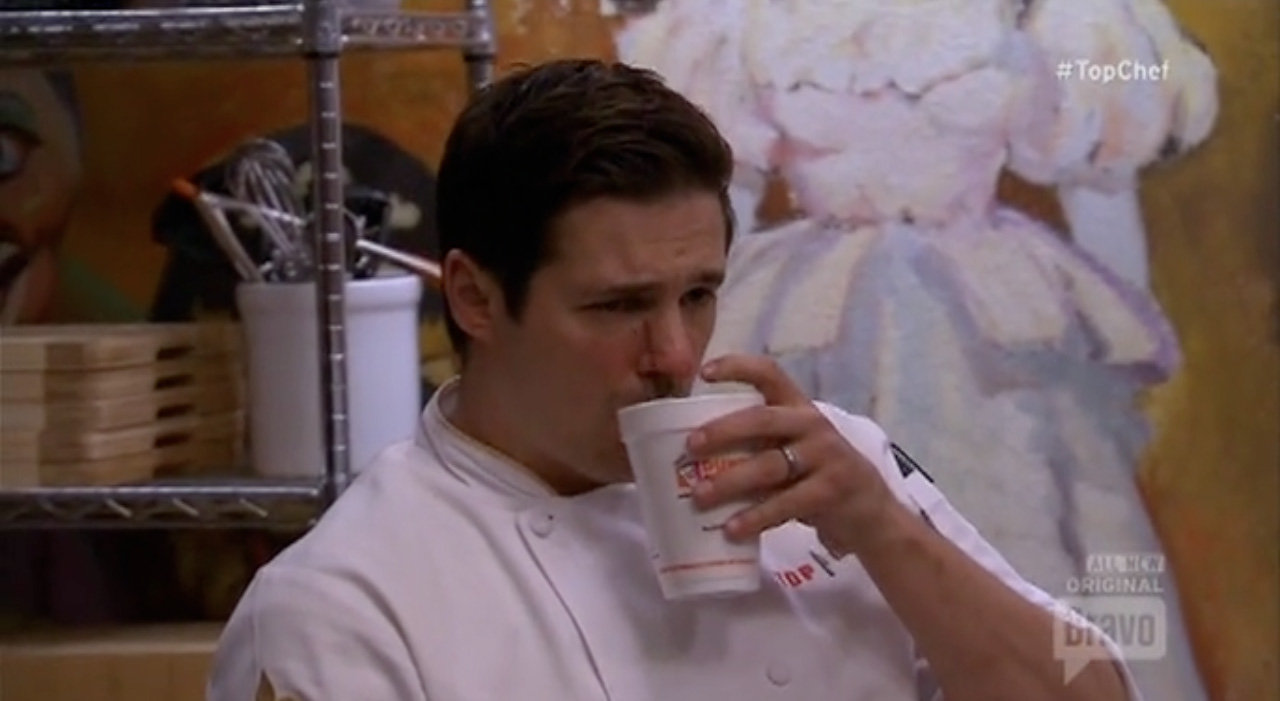 Waiting for Judges' Table, the chefs sit in the kitchen nervously clutching their cups of Dunkin' Donuts coffee, the one thing that throughout this ordeal has felt safe and familiar. Padma calls all of the chefs in for judging. Overall the judges were much happier with this challenge than Roy Choi was with the Quickfire. They love Carlos, Shirley, and Nina's dishes. Ultimately, Shirley wins the challenge. 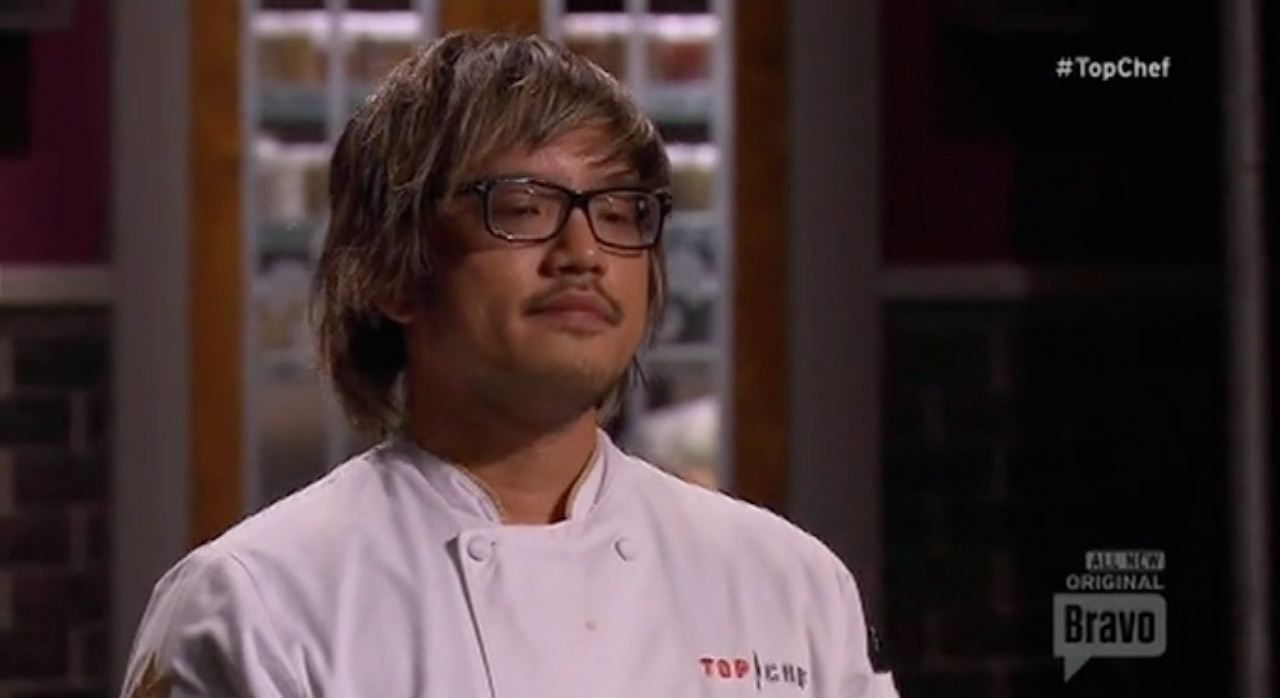 Elimination is between Brian and Nick. Both dishes had flavorful elements, but also large-scale flaws. Padma announces that Brian must pack his knives and go. I'm shocked, I was sure that with all of the pot drama and burnt quinoa that Nick would be heading home for sure. Well, I guess the show needs a villain, and Brian probably needs to go get his highlights redone.