Harvard University's third annual Science & Cooking public lecture series brings chefs from around the world to lecture on the intersection of science and cooking. And Eater Boston editor Rachel Leah Blumenthal is on the scene. This week: White House pastry chef Bill Yosses. 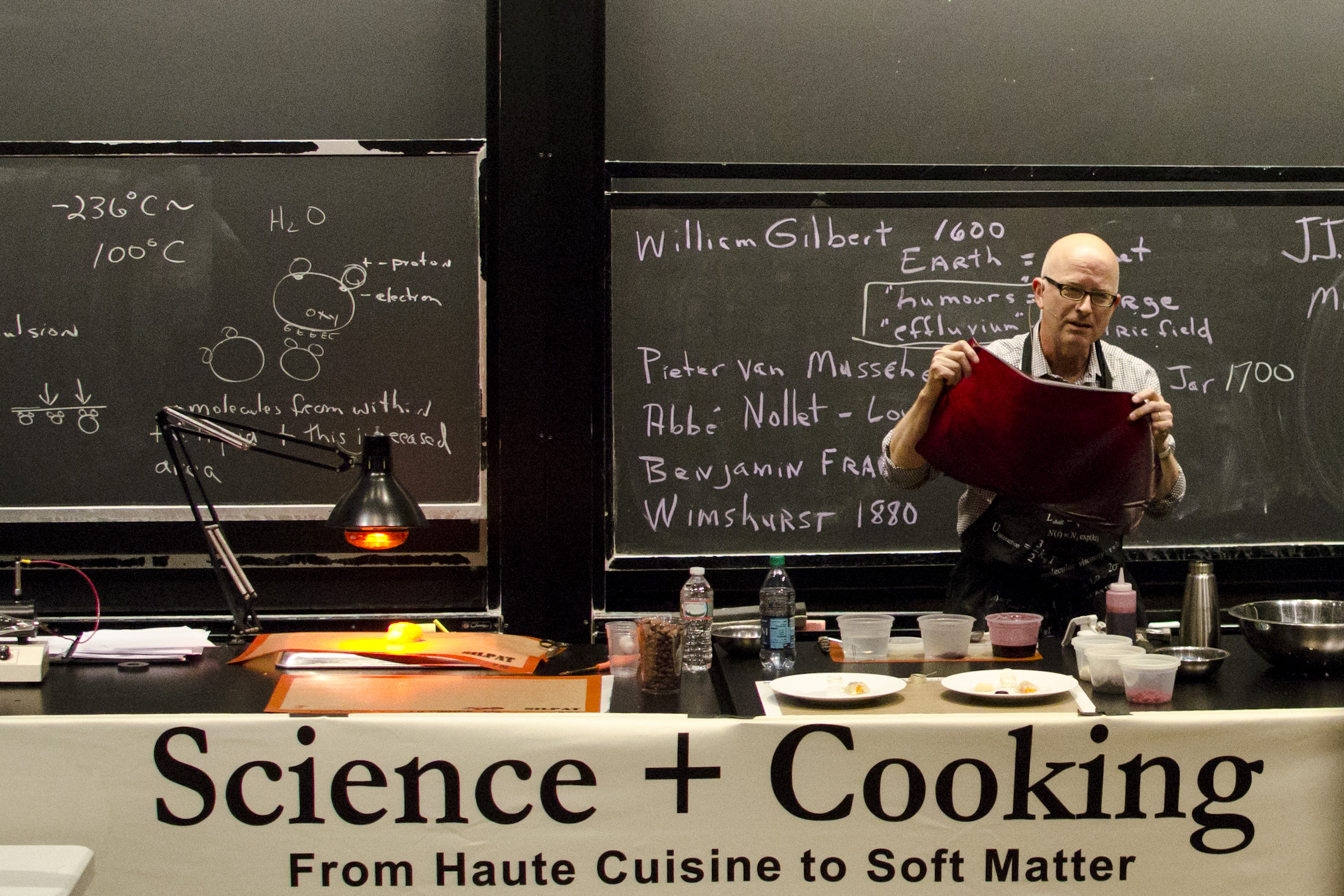 As part of Harvard's ongoing Science & Cooking Lecture Series, White House Pastry chef Bill Yosses lectured on the topic of "Elasticity: Dessert = Flavor + Texture." The evening started with a video of seven-foot-tall musical Tesla coils playing "House of the Rising Sun" and ended with a composed dessert plate with six separate molecular components. In the middle? "400 years of the history of physics as seen through the eyes of a pastry chef." Yosses has served at the White House since being hired by Laura Bush in 2007. Though Michelle Obama is known for promoting healthy eating, there's still room for dessert at the White House. In presidential fashion, the Obamas favor traditional American baked goods — pies, cobblers, crumbles — made with local, seasonal fruits.

But Yosses' true love, it seems, is more in the molecular gastronomy realm, and in science in general. "In our day, people don't know enough about science," he told a full auditorium at Harvard's Science Center on Tuesday night. "Without an understanding of science, we don't make intelligent decisions." With that, he embarked on an animated discussion of the history of scientific findings in electricity, interspersed with quick demos of dessert techniques. "I'm still talking about dessert, by the way," he insisted after arriving at J.J. Thomson's cathode ray tubes, circa 1897.

Electricity and dessert are an unlikely pair, but it boils down to the official theme of the evening: "Elasticity: Dessert = Flavor + Texture." Elasticity, in a general sense, refers to a material's ability to return to its original shape (or not) after force is applied (think of gently pulling and then releasing a rubber band). When it comes to food, the property of elasticity manifests itself as texture. How does a certain food feel in our mouths? How much spring or squishiness or melt does it have when we take a bite? Physical characteristics like elasticity are determined in part by the bonds taking place at a molecular level, and chemical bonds can thank electrostatic forces for their existence. Opposite charges attract; there's electricity.

Yosses starts in 1600, when English physicist William Gilbert was already writing about how Earth is a magnet and how "humours" move in an "effluvium," or what we now know as charges moving in an electric field. Over the next four centuries, others would come to see that electricity and magnetism are two sides of the same coin, a force conveniently dubbed electromagnetism, which accounts for the vast majority of phenomena we see in the world around us, including, of course, the culinary world. 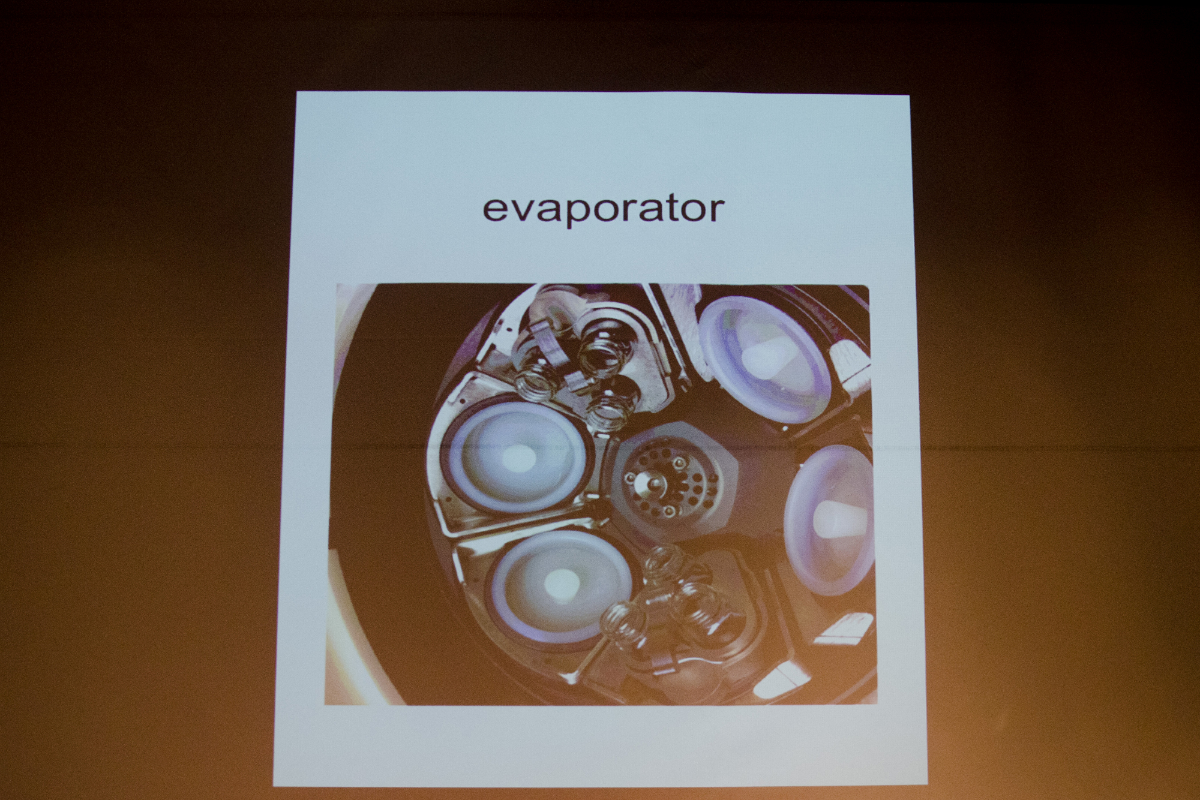 Take boiling point as an example of how electromagnetism connects to food. The chemical bonds (remember those electrostatic forces?) present in a material have an impact on its boiling point. Hydrogen bonding between molecules, for instance, is strong, requiring high temperatures to boost a hydrogen bond-rich liquid to a gas. Water's hydrogen bonds make it "very sticky," said Yosses, and it has a boiling point of 100 degrees Celsius. That temperature is high enough to have a negative impact on the delicate art of creating and maintaining subtle flavors in cooking. But take a machine called an evaporator, and you can use a vacuum to decrease pressure and thus lower the boiling point of liquids to a point where flavors, aromas, nutrients, and colors are preserved.

Yosses showed a bright red hibiscus infusion that he made using the evaporator. Later, he demonstrated the popular technique of reverse spherification by adding calcium lactate gluconate to the infusion and squeezing puddles of it into sodium alginate. After a minute or so, there were distinct blobs of the hibiscus substance sitting in the alginate. (They would have been more neatly spherical if he let them sit longer, Yosses later explained in response to an audience question.)

Then it was on to another hallmark of molecular gastronomy: foam. Despite varying amounts of enthusiasm for foam from the restaurant industry and diners alike, Yosses uses it to create healthier desserts that evoke the pleasure of richer and creamier options. Some textures, he explained, allow for flavors to be immediately available to the palate, like emulsions and mousses. But how can chefs keep that smooth, melting texture while moving away from fats? Foams. Collections of tiny bubbles that capture flavors while keeping things relatively light. A dollop of peach puree foam landed on Yosses' demo dessert plate, along with the hibiscus almost-sphere. 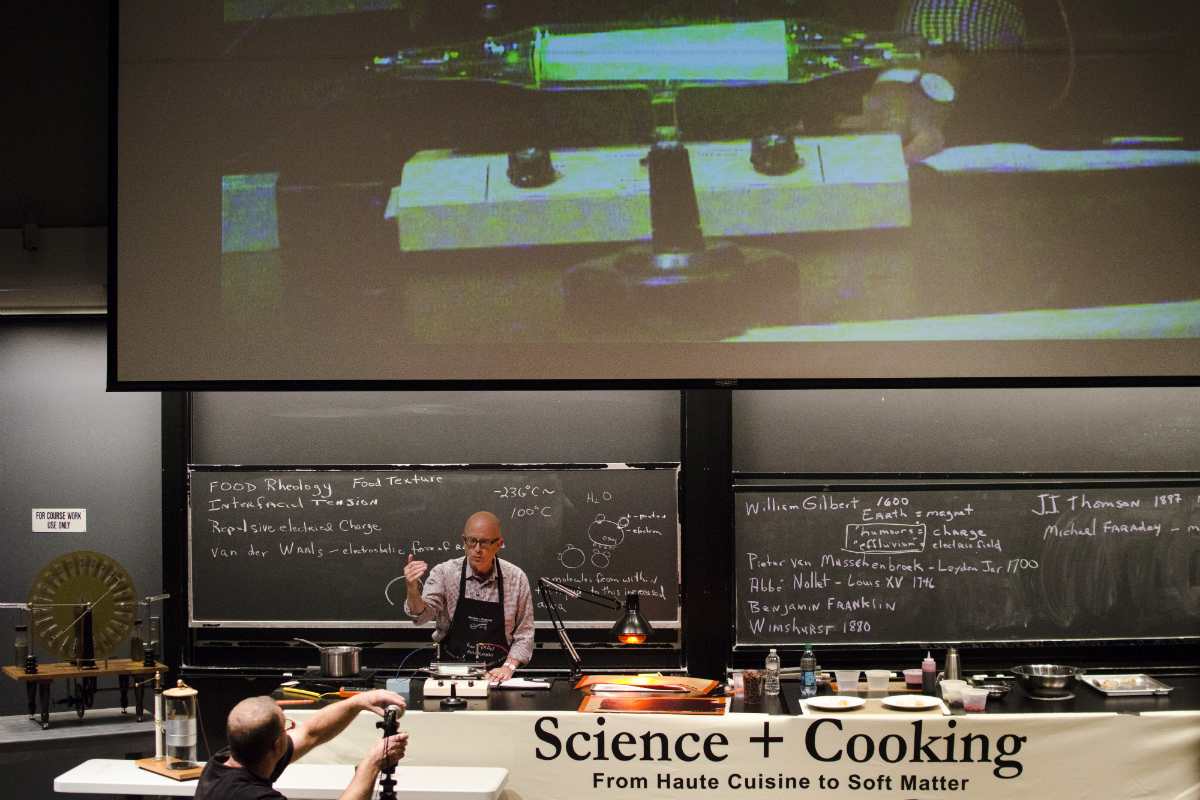 More electricity discussion followed, complete with some tame demonstrations of sparks from a Leyden jar (invented by Pieter van Musschenbroek, who "sounds like a cartoon character," said Yosses) and a Wimshurst machine (which itself includes two Leyden jars). Not replicated in the lecture hall: Yosses discussed Abbé Nollet's 1746 demonstration of the speed of electricity's propagation as it traveled through a mile of monks, who all got shocked at nearly the same time. And finally, he reached the aforementioned cathode ray tube, showing how a magnet could deflect the electron beam, and reaching the point in the timeline where electricity and magnetism became irrevocably intertwined.

As for the rest of the food, there was a fruit-filled "sushi" roll with an elastic agar skin. There were photos of elaborate chocolate Easter eggs and a discussion of how Michelle Obama's "Let's Move" campaign has helped elevate what Yosses called "sweaty, dirty, swearing" chefs to a role in policy making. "We got rid of the sweaty and dirty, but we still swear," he said. There was a demonstration of the creation of fragile spirals of "sugar glass," a fairly elastic mixture of sugar and water around 160 degrees Celsius. (Flavors can't be added to the "glass" as the mixture would begin to crystallize.)

There was a giant piece of fruit "leather" made from cassis juice, the texture provided by the natural pectin in the fruit, and Yosses attempted to wear it as a scarf before thinking better of it. And there were globes of mannitol, a substance found in sugar-free gum, frozen into spheres in a silicon mold. The frozen mannitol doesn't re-absorb moisture, so the spheres could be filled with, say, lemon curd. The sushi, spiral, leather, and globe joined the sphere and the foam on the dessert plate for a complete dish.

At the end, an audience member asked Yosses what he hoped his legacy would be. Above all, Yosses said, he wants to reinforce the philosophy that food is pleasure. 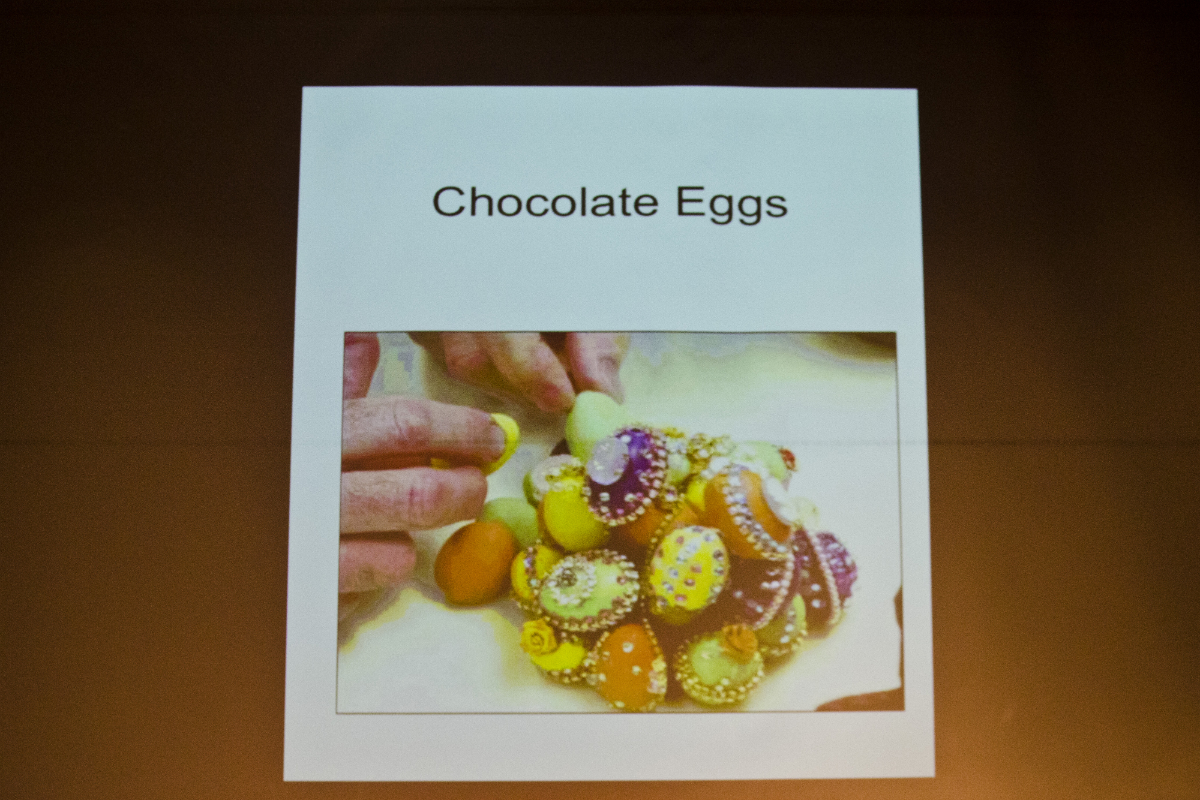 The Harvard Science & Cooking lecture series continues on Monday, September 30th, with José Andrés (ThinkFood Group, minibar, Jaleo) speaking about diffusion and spherification. Seating for the free event is first come, first served, and more details can be found on the Harvard website.