Ricardo Palao on 11 Years at Lantern in Chapel Hill, NC

Share All sharing options for: Ricardo Palao on 11 Years at Lantern in Chapel Hill, NC

This is The Gatekeepers, in which Eater roams the world meeting the fine ladies and gentlemen that stand between you and some of the restaurant world's hottest tables. 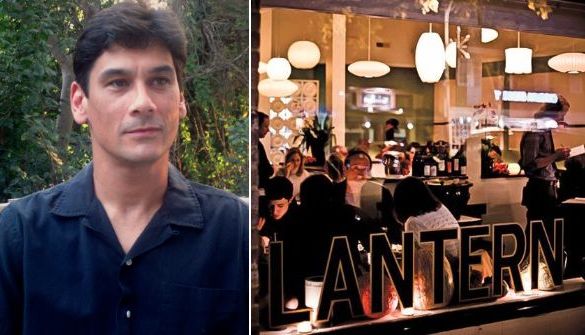 When chef/co-owner Andrea Reusing opened her farm-to-table Chapel Hill restaurant Lantern in 2002, Ricardo Palao was among the close-knit opening team, all of whom had worked together at Carrboro, North Carolina's Acme. "We were all unknowns with a big agenda and big dreams," Palao says of the concept, a farm-focused approach to Asian fusion cuisine. Since opening night, Palao has seen his role shift from the kitchen to the front-of-house manager, which has allowed him to witness Lantern's rise from a neighborhood spot to a dining destination where tables must be booked weeks in advance (helped, in part, by Reusing's 2011 James Beard Award for Best Chef Southeast).

Eleven years in, it's still a team effort. "It's been a privilege to be constantly challenged and to be able to stay in one place," Palao says. "I look around and wonder, 'Wow. Every day is still exciting.'" Here now, Palao talks with Eater about the phrase "destination restaurant," the phantom lunch shift, and what restaurant life is like in an "academic environment" like Chapel Hill.

You cooked in your previous work with the Reusings; did you start in the front-of-house at Lantern?
I started out with a dual [role]: I made some desserts, we had a pastry chef and I worked under her probably for the first three weeks. The pastry department had three people working in it; I was one of them. And we had the bar that also had three people working in it; I was one of them. The bar absolutely exploded, business-wise, basically from the first night we opened, and that energy and excitement was pretty compelling. But there was also a need for someone with the skill and the interest just to meet the challenge; and there really was no room anymore for me to work in the kitchen at that point, because there was so much to be done here. You know, you don't know these things until you open. Andrea thought it was going to be slow and mellow. I signed up for lunch shifts, and we [haven't] opened for lunch yet — it's been over 11 years.

Lantern is known as a "destination restaurant." Do you think that's fair? And how has that label evolved?
You don't even realize what you're working toward sometimes, because every shift you're just trying to make it the best it can be. But when you look back, you see there's this wave, a nice upward curve. When Andrea won the James Beard Award for Best Chef in the Southeast, we thought we were busy already, but we got a real kick in the pants that way, business-wise especially. So I think when you use the term "destination restaurant," I think it's the awareness of the restaurant, of the cooking primarily... the food is what everyone raves about. I guess it would just mean a widening of the circle of awareness of what we're doing here, and the interest in what we're doing here. So, now we have people who return on their visits from Germany, from all over the world, all over the country. It's not just locals anymore. Although that doesn't sound incredibly positive — because now there's so many people that want to come that sometimes, maybe some of the locals would be challenged by that.

So with that in mind, how far in advance should people be booking reservations?
We always have a lot of room in seat walk-in guests. Just a little bit of that is in the dining room, but we have a bar/lounge and a patio where we serve our full dinner menu. Those settings are different from the dining room, but we always talk about the walk-in policy, because destination restaurant or not, we're really open to a visit from everybody. That being said, if you want to book a table, especially for a special event, and you want a prime time — between 6:30p.m. and 8:30p.m., just about any night of the week — booking maybe two weeks in advance is maybe a good idea. For the weekends, I gotta tell you, sometimes four to six weeks in advance is the best way to make sure you'll get your 7:30p.m. table that you want. It's always a discussion with people about the reservations, because they fill up so quickly that we're trying to help steer people to come in, whether they're walking in or at an alternate time.

Tell me about about the bar and patio spaces.
We don't reserve those tables. It's all for walk-ins, the spirit of it being it's not all about three-course dining with wine. What happened in the bar and what really made the bar take off was the flexibility to enjoy smaller plates if that's what you want; just a glass of wine if that's what you want. I hesitate to say "more casual" because I want people to come any way they feel, and the dining room can certainly have a casual feel, if that's what the guest wants.

It's 8 p.m. on a Saturday. How long is the wait for a table?
If the restaurant was full and you walked in right off the street, your wait would be anywhere from half and hour to probably a little over an hour. Because of the dining room, the bar, and the patio, we serve dinner in all three spots; sometimes folks will come in and think they want to sit in the dining room, [but] they see the bar, they see the patio, they're happy to wait for these other areas, too. So, suddenly our seating options for these guests expand so that we can usually get them down quicker. [...] That's on the guests' side as well. We want them to sit where they'll be most comfortable, so if they want to wait for an hour-and-a-half in the dining room, if that's the wait, we should try to take good care of them during that time.

That said, is there anything you do to make that wait feel shorter?
I think communication, staying engaged, to varying degrees. But really just letting them know, first of all, making sure that you've instructed them where they will be comfortable, where they can get a drink, and the best way to enjoy themselves here without your attention. And then, the best thing to do is usually to check in with them, let them know where they stand with their wait, let them know that people are paying attention to their presence. That can be very subtle. A lot of times, it's just a nod, or a "Is everything going well for you?" [or] "May I bring you something?." Very simple stuff like that. But by and large, the programming here is pretty easy to follow. If you're patient when it's busy, it is easy to get a drink and to make sense of it all.

How many guests are from out-of-town vs. local residents?
I would say at least half of the guests are coming from out-of-town, varying degrees of "out-of-town." Like I said, with the increased awareness, I'd say the population of local neighborhood people is probably a little smaller and we've probably grown on the out-of-town guests and visitors. It's about half-and-half.

So do you have favorite regulars?
From the earliest of days, we have people who are still coming in. And it's funny, we've seen waves of graduates come through here, and leave and come back later as [laughs] professionals. And certainly because we're in an academic environment, people are coming and going. It's funny, we'll have regulars for six years and then they'll say goodbye because they're moving on. And the nice thing is that they come back, and they're still regulars, even though they now live hundreds of miles away.

Tell me about some of the crazy requests you've gotten from guests.
It isn't really a crazy request, but we get a lot of requests for bread. And it's an Asian restaurant; we have like four different kinds of rice, but we don't have any bread. Sometimes it's humorous, sometimes I think it can be frustrating for people, but that's definitely one.

Do you have any tips or tricks for dealing with a guest who just refuses to have a pleasant experience?
That's a challenge, because there's really two ways that can go. For the guest who refuses to have a pleasant experience, I suppose I look at their guests and their party and try to make sure they are having a pleasant experience. There's going to be that one person whose issues you have to address as best you can, but this may be at a table of six people, so there's five other people there that we're also concerned about beyond this one person. The trick is to listen carefully about what could possibly be the roadblock to satisfaction. And it's tricky. You read between the lines sometimes. In a restaurant like ours, where everything is small, sometimes people just don't like the size of the table, and there's very little you can do about it. So you try to focus on what is going on at their table positively and perhaps accentuate that.

Finally, what's your must-have Gatekeeper tool?
I would say an open heart. Open heart, open mind. I think it's just the realization that you're going to get back what you give out, and that doesn't necessarily start with what you've been given. Let's go back to this guest that won't be satisfied: You just give the most positive, welcoming hospitality that you can. And that has an effect, a positive effect, on even the most hard-nosed people. I would have to say for me, it's less of a technical thing and more of an approach, where I'm going to make you very satisfied with this experience here in spite of any difficulties you may have — because that's why we're here. That's why we open the door, and that's why we're still in business.