As Eater NY's Shitshow Week 2013 draws to a close, a look at the final day: 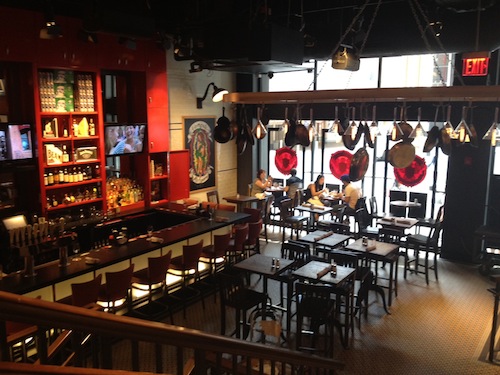 · One year after becoming the most reviled restaurant in New York, the doors are still open at Guy's American Kitchen and Bar, the Times Square restaurant from Guy Fieri. Eater NY makes a return visit and reports that yes, "the food is still terrible." And some man-on-the-street reporting reveals that tourists are still lukewarm, with one overheard saying, "Do you think I'm going to let some blonde-tipped asshole serve me a $23 chicken breast?"

· Another restaurant makes the dreaded Deathwatch list, and this time, it's Brooklyn's Cafe de La Equina, which recently lost its chef and shut down (for one night, anyway), its dining room bar. On the food: 'When you order bean dip at La Esquina, someone in the kitchen unscrews a jar and puts it on a plate with a handful of chips. $7."

· Is the Lower East Side's clubby The General a shitshow? The answer, in a departure from other restaurants this week, is "no" — "but that doesn't mean it's a restaurant worth going to."

· In a piece inspired by New York's Shitshow Week, an anonymous Las Vegas food critic decides to air some grievances of his/her own, and the target is very specific. There's no love here for Hubert Keller's Las Vegas restaurant Fleur, where " I found low-relief ass art on the walls, dopey flatbreads, silly salads, a hot dog and a bevvy of burgers."