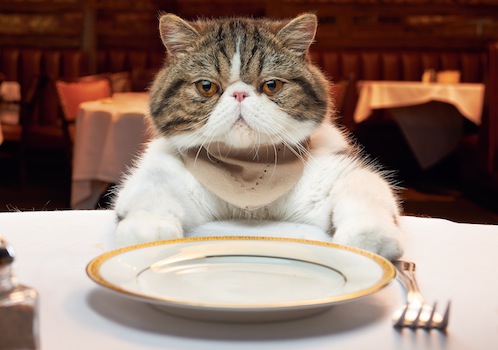 "When I first envisioned re-creating the solo backpacking tour I took as a youth, I promised myself that I would skip the places that I had previously visited as a kitten. But despite my intentions, I found myself being strangely drawn back to Paris. I believe it was the Pâté." -The Cat Critic, August 16, 2013

The Cat Critic finds a familiar bistro and sits down to a remarkable meal, which reminds of him of something even more familiar—Merrick's Purrfect Bistro Tuna Pâté. Oui, Merrick's. A 5.5 oz. serving is only $1.69 at Petco and other independent pet specialty stores. The hints of Paris in every can are free.

Known in the alley as Mr. W. "Mittens" Bloomfield, this professionally trained Cat Critic has approved each flavor of Merrick Purrfect Bistro's 21 delicious bistro recipes. All options are 100% grain-free, and feature chicken, salmon, tuna, beef, duck, and turkey—including 5 dry choices. Check out more from the Cat Critic, including a coupon for $4 off any bag and $0.50 off any can here. >>