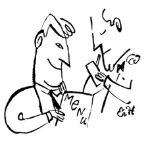 Washington Post food critic Tom Sietsema, on getting some personal attention from José Andrés on a recent visit: "Mr. Andres and I go way back, to a time before I became food critic. Was I a little uncomfortable about the fuss he made at my table at Jaleo earlier this week? I was. But the chef is a big personality, and I understand his enthusiasm. Plus, I also learned a few things that I can eventually pass along to readers, and that's more important to me than keeping a chef at arm's distance." [WaPo via Eater DC]