Gerard Craft on the First Year at Pastaria in St. Louis

Share All sharing options for: Gerard Craft on the First Year at Pastaria in St. Louis 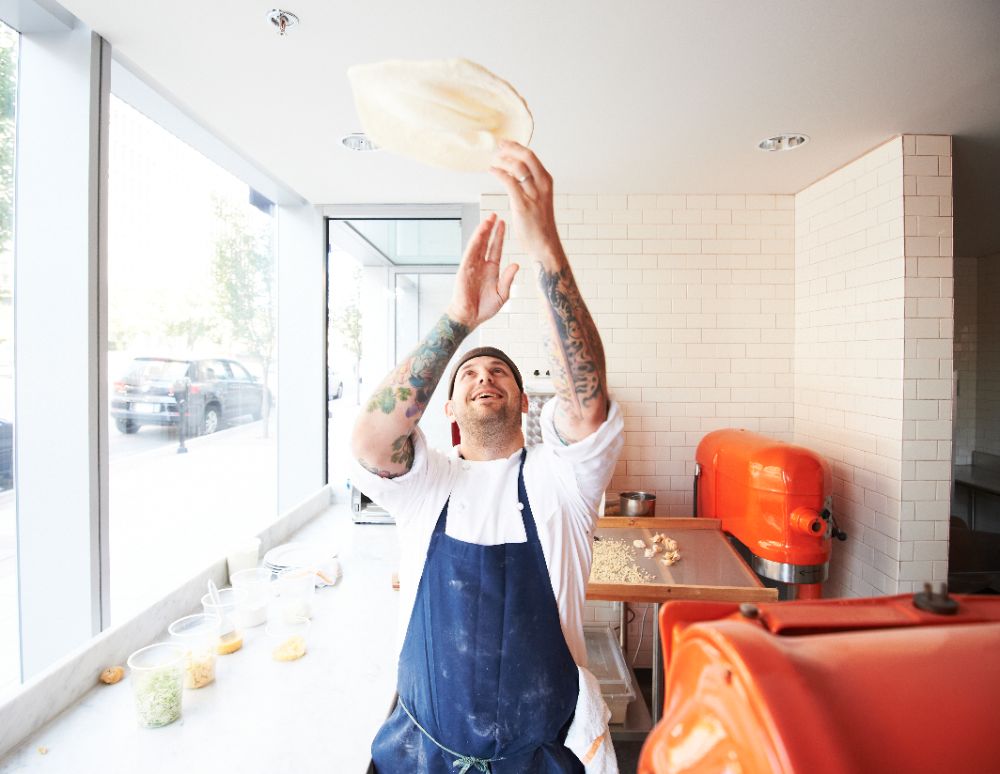 When James Beard-nominated chef Gerard Craft announced last summer that he'd be relocating his celebrated St. Louis restaurant Niche, the new concept came with a more casual sister spot that quickly landed on "most anticipated" lists. Pastaria was promised as the more accessible, family-friendly restaurant in Craft's portfolio (which also includes the Parisian-inspired Brasserie and cocktail bar Taste), and upon opening, was quickly slammed by self-proclaimed foodies with their kids in tow. "We wanted success and we were projecting success, but we didn't know we were going to be as busy as we were," Craft says of Pastaria's quick start.

A few weeks before Pastaria's official one-year anniversary, Eater talked with Craft about the evolution of Pastaria's concept, why approval from kids means more than any industry accolade, and the $400,000 surprise that resulted in Craft gaining more than 60 pounds.

How did the concept for Pastaria come about?
The concept actually started as a slightly more formal concept. It was very pasta-centric and all of that, but the space kind of dictated it. Before, it was going to be in kind of an old building in an up-and-coming neighborhood, and it was a much smaller space. It only had 60 seats. And then the opportunity to put this restaurant in the location that we did, it's a much larger space, very industrial, very large ceilings — it has 28-foot ceilings — it had to be bigger. On our last trip to Italy, one of the biggest things that we decided we wanted to translate was not just the food, but the feeling of what "family" is over there. And family being, whether it's your kids, or whether it's your best friend, everybody, almost a town hall kind of feeling.

So you relocated your longtime restaurant Niche into this new space, which has Pastaria right next door. How did you land the space?
We were definitely looking to do this concept; I think it was a pretty well known, and the CEO of the company came to us said, "We love your restaurant, we want Niche to be here." At the time, I think Niche was reaching its capacity with its kitchen. It wasn't really laid out for what we were doing anymore, so we going to have to do a major renovation there. So we started to investigate [his offer], and it's five minutes from my house, which is a huge plus. And I started to think about being able to sneak away from the restaurant and see my kids without sitting in traffic, and so it just kind of started to fall together. It took about a year and a half, two years to really knock out the deal. It was a long process.

You told Eater last year that Pastaria was an idea you'd had for four years before opening. How did the concept evolve over that time?
We knew that we wanted this to be a restaurant that was more for a full family... I have a seven year old and a five year old, and it's incredibly hard to go out to a dinner. We could take them someplace nicer, but it's uncomfortable for us; no matter what anybody says about taking kids out to eat, it's uncomfortable for them. They don't want to be there. So we wanted a place where people could bring their families and their parents didn't have to suffer crappy food. [...] And I think we wanted to combine those two models. So you can still get a pasta with a really nice beef ragu and orange and olive and it's a complex pasta dish, but at the same time, your kids can get buttered noodles... The kids can stand up and watch all the pasta being made, or the pizza dough being rolled out at the front of the restaurant. It really starts to open up the experience for everybody.

How did build-out of Pastaria go? You were doing two build-outs at once.
Yeah, that's an awful idea. [Laughs] In case anybody's thinking about it, it was an awful idea. Looking back on it, I'm not sure if I would ever do something like that again. It's just a lot of work. It's a lot of attention, a ton of stress. But every single day, you have a list, and you just keep plugging at it. The one thing that was laid on us when we made this move was that there was a lot of expectation. It was kind of like, "You better not fuck this up, or else," from the city. We carried that weight, and we took it very seriously. I didn't want to let anybody down, and I didn't want anybody out there saying "I told you so." We really wanted to make people proud and impressed, and so, again, it was just constant work and watching it constantly.

Were there any surprises or unexpected problems that came up?
[Laughs] Yeah. Again, construction is what construction is. One more thing I really hate is construction. After we build Niche originally, I thought I'd never build a restaurant from scratch — and then I built two more, at once. [But] the HVAC that they had originally projected was wrong, so it was going to be $400,000 more. It's like, "Oh, is that it? $400,000? what do you mean?" Tons of stuff like that. Which is even more pressure. This is the biggest project I've ever taken on; it was the most stressed I've ever been in my entire life. We really put a lot on the line, and it worked out.

Do you remember opening night at Pastaria?
It's funny: I remember doing a friends and family. And I think we probably had 30, 40 people come, small enough to keep it really light. And it was really tough. And it's funny now to do 500 people and have it be really smooth — and say, "Remember that night when we did 40 people and it was one of the most miserable things in the world?"

What were the problems?
The new kitchen, you're still figuring out system, rhythms, you're still teaching people how to cook pasta. As simple at that seems, there's a lot of people who need a lot of training on how to cook pasta perfectly. And as we got busier, there have been big problems with how to manage a wait. We don't take reservations, which is a huge national debate right now. And I know why it's come up: The only reason that debate is coming up now is because there's been a big surge in casual restaurants from chefs from a caliber of place that takes reservations. I think that's just never come up before.

And people were really upset. The wait time's an hour; "I want a reservation, this is crap" — people say everything you can possibly imagine. But at the same time, I was like, "Look, if you waited three months for a reservation here, came in, and ordered a margherita pizza, you would hate me. You'd be like, 'I just waited three months to have a fucking margherita pizza. That's so stupid.'" So, trying to explain that to people, and trying to keep people happy. We started making little doughnuts that we pass around to everybody who's waiting, little things like that. Just trying to make it a little more fun for people to wait? we learn how to get through a lot of those things.

Are most Pastaria diners familiar with Niche and Craft?
Yeah. Right in the beginning, there was a lot of that. But there was a ton of families. It was really exciting. I had to go to my daughter's school, and the kids were like, "You own Pastaria!" That was way more gratifying to me than any magazine [accolade] or anything like that. I know that kids were telling their parents, "I wanna go to Pastaria tonight."

But speaking of, do you notice a bump in business when good press hits?
We see those bumps at Niche the most. Pastaria is starting to move beyond just the foodie world; that's our goal. We still have those people, but we're getting a lot of people who don't read Food & Wine magazine, and who don't know my name, and they have no clue what the "hot new restaurant" is. All they know is that their friend at work talked about Pastaria and they love pizza, so they come in. Again, it's a really exciting thing for me, because I feel like we're reaching a broader audience right now. We get to tell a better story to more people.

This being your fourth opening, does it get easier?
No. [Laughs] I really wish, I was really hoping that that would be the case. I'll say it's easier in that we have a much bigger staff now, so we have more resources to do things. In that sense, certain things are a lot easier: I'm not dealing with the construction company every day, somebody else is. I actually get to cook instead of sitting down in dumb meetings about orders, though I still have to do a few of those. In that sense it gets easier, but no. Opening a restaurant is opening a restaurant. We don't take it lightly — I gained 60 to 80 pounds, which I am now, fortunately, losing.

Does it feel like it's been a year?
Yes. Absolutely. The wrinkles in my face say 10 to 15.

And plans for restaurant #5?
We're a growing company. Right now, we're focused on the restaurants at hand. We're one year old; it's still an infant. It can walk, but it's still learning things; we're still learning about catering and things like that, we still have work to do before moving on. But yeah, we're a growing company, so we'll probably do something else down the line.