The craft beer bar Brewer's Cabinet in Reno, Nevada posted a photo on Facebook of a patron who skipped out on his bar tab, which led to some internet detective work and the eventual naming of a suspected serial dine-and-dasher. After the photo was posted, other Reno establishments (including Imperial, Campo and Chapel Tavern) stepped forward to say they, too, had been victims of the man, named Saul Zelaznog. And according to the Reno Gazette-Journal, Zelaznog says the whole thing is a misunderstanding.

After Zelaznog allegedly walked out on a tab of about $100, Brewer's Cabinet restaurant filed a police report, then posted to Facebook a message of warning for other establishments in the area. Here's the post in full:

Zelaznog told the Gazette-Journal that "he had forgotten a method of payment" when dining at Brewer's Cabinet, but he's reportedly asked his family to wire him money so that he can pay his outstanding bill. "I was going to go back to pay my tab," Zelaznog told the paper. He'd apparently left a nice watch as collateral at another restaurant in town, and when asked why he would go out to eat without having the ability to pay for his meal, he said it was a "mistake." One that he's repeated more than once.

This is not the first time that the restaurant world has taken to social media to voice frustration (see: tip-shaming and shaming no-shows).

It's unclear at this time whether Zelaznog (who also goes by Gonzalez?) has been charged with anything, or if the bars and restaurants involved have been repaid. Below, a video interview with some of the local Reno businesses and proof Zelaznog has already become a meme. 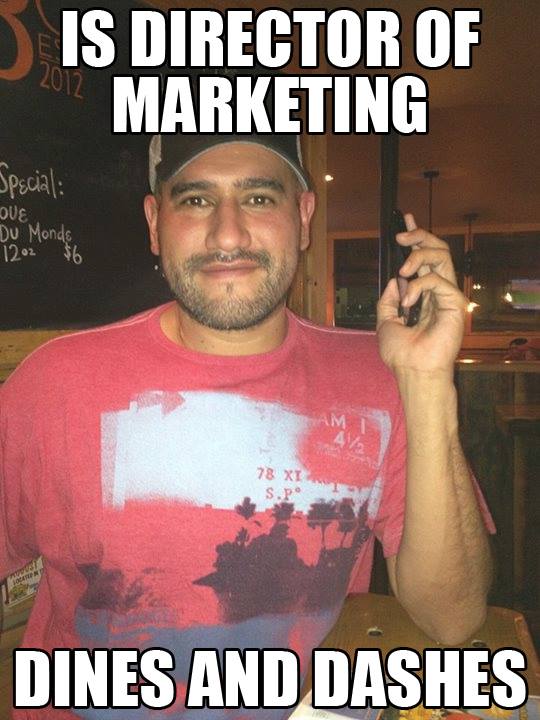