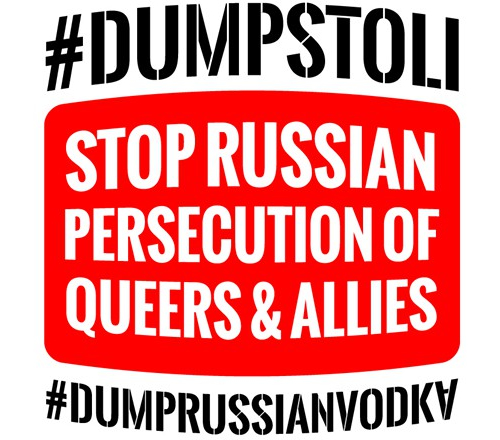 In the wake of new Russian laws that persecute homosexuality (more on that here), bars across the US have begun to boycott Russian vodka. The movement was popularized by columnist Dan Savage in Seattle's The Stranger, who writes: "There is something we can do right here, right now, in Seattle and other US cities to show our solidarity with Russian queers and their allies and to help to draw international attention to the persecution of gay men, lesbians, bisexuals, trans people, and straight allies in Putin's increasingly fascistic Russia: DUMP RUSSIAN VODKA." And lo, bars have begun dumping Russian vodka.

Chicago gay bars Sidetrack and the Call were among the first to scrap vodkas like Stolichnaya and Russian Standard. Sidetrack posted a statement on Facebook, announcing their participation in the boycott: "Sidetrack cannot support a brand so associated with Russia at a time when Russia is implementing (against strong world criticism) its anti-gay law that bans gay 'propaganda.'" KTVU in San Francisco reports that even bars that aren't participating in the boycott are selling less Russian vodka as customers request Stoli-free vodka cocktails. A bar in Philadelphia, Woody's, is actually having a Stoli Dumping Party — in which, presumably, people will pour out bottles of the vodka — on July 31.

It's not just happening in the US, either: Vancouver bars are gearing up for Pride week by hopping onto the boycott as well.

It's worth noting that the vodka boycott comes amidst some disagreement about whether the gay community and its allies should boycott the 2014 Winter Olympics, to be held in the city of Sochi. Some have spoken out against an attempt to boycott, include Olympic figure skater Johnny Weir, who writes in his Falls Church News=Press column that "The Olympics are not a political statement, they are a place to let the world shine in peace and let them marvel at their youthful talents." A group of 23 Russian LGBT activists have released a letter to the US activist group Queer Nation supporting both the vodka boycott and a potential Sochi boycott as well.

While many of the calls for boycott (including Savage's) recommend switching to local distillers, one major vodka brand is seizing the Dump Stoli movement to advertise. Apparently this ad from Skyy Vodka that reads "American made, and made for everyone #CheersToEquality" was promoted on the Twitter hashtag #DumpRussianVodka.

Those opposed to the boycott often note that Stoli is made in Latvia and is owned by a company in Luxembourg, but as Savage points out its US distributor, SPI Group, is Russian-owned. The brand will return to complete Russian ownership in 2014. Current SPI CEO Val Mendeleev wrote a letter stressing the company's support of GLBT issues, writing:

We fully support and endorse your objectives to fight against prejudice in Russia. In the past decade, SPI has beenactively advocating in favor of freedom, tolerance and openness in society, standing very passionately on the side of the LGBT community and will continue to support any effective initiative in that direction.

Savage's piece was accompanied by several logos designed by Matt Fikse-Verkerk: the above logo, the tall logos below, and a double-sided flyer promoting the boycott.

Is your bar or restaurant boycotting Russian vodka? Feel free to pipe up in the comments.