10 Best Lines from the Boulud Story in the New Yorker

Share All sharing options for: 10 Best Lines from the Boulud Story in the New Yorker

In the July 29th issue of the New Yorker, author Bill Buford has a feature story chronicling his efforts to recreate three vintage French dishes with New York City chef Daniel Boulud. The dishes are old school (centuries old) dishes with mysterious origins: Chartreuse, a vegetable-stuffed bird; Coulibiac, a baked salmon and egg dish that's wrapped in pastry; and Canard a la Presse, pressed roasted duck. There's much to be learned about the history of French cuisine in the story, but also about Boulud's culinary education (intense), his temperament in the kitchen (intense), and the character of three classic dishes (intense). Below, the best quotes from the story: 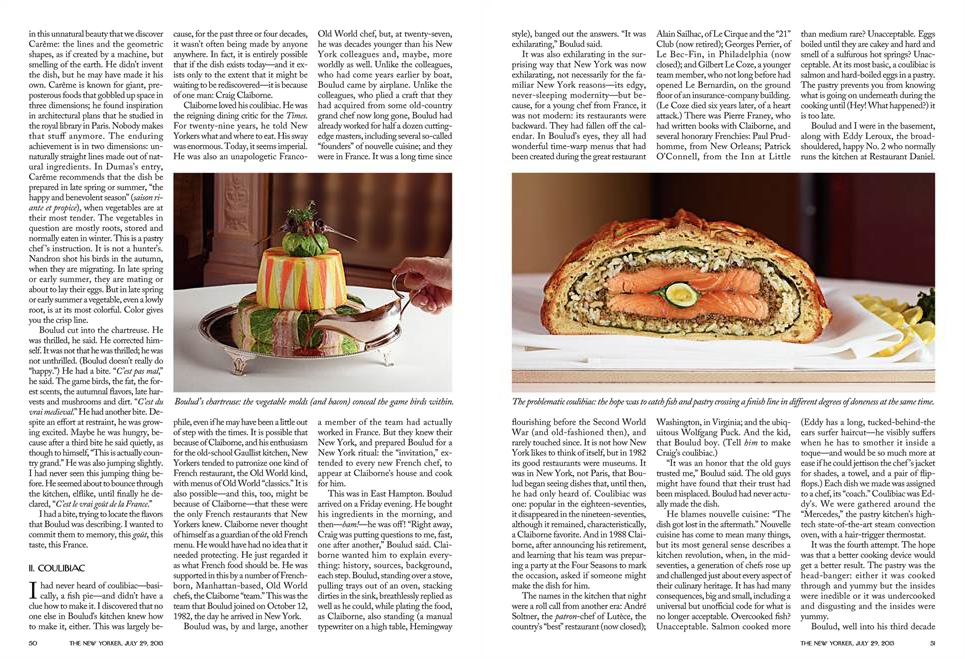 1) "For Boulud, the farm childhood was idyllic and not so idyllic. He was allergic to hay."

2) "Shortly before his fourteenth birthday, when he was doing badly in school and had become a worry to his parents, a neighbor intervened, a flamboyant figure known as the Countess. She arrived bearing a no-nonsense, let's-settle-this-thing-now resolve and asked the boy what he wanted to do in his life. 'I want to be a chef,' he said. Then he reflected. 'Or maybe a jockey.'"

3) "The dish is, in fact, named after a bunch of monks, mountain freaks who never knew the fatty happiness of a steak frites and a glass of red."

4) "Boulud cut into the chartreuse. He was thrilled, he said. He corrected himself. It was not that he was thrilled; he was not unthrilled. (Boulud doesn't really do 'happy.')"

5) "Maybe he was hungry, because after a third bite he said quietly, as though to himself, 'This is actually country grand.' He was also jumping slightly. I had never seen this jumping thing before. He seemed about to bounce through the kitchen, elflike, until finally declared, 'C'est le vrai gout de la France.'"

6) "Boulud was trying quail's [eggs]—needing less time to cook than chicken's—and burying them between two salmon fillets, to retard the heat penetration. But it wasn't working. He cut into the fourth effort—'Merde!'—and pushed it away in disgust."

7) "The pastry was acting as though it were more important than the fish. This was wrong. So Boulud ditched it. Just like that. Bang! He abandoned Escoffier. In the kitchen, no question, everyone was feeling a modest but undeniable buzz: Boulud ditched Escoffier? No way!"

8) "I told Boulud. He was not pleased. In fact, he looked unhappy. He was pacing. 'You don't understand,' he said. 'I have been trying to make a coulibiac for thirty years. I have been haunted by it. Finally, I get it right. Or at least I believe I do. Now you tell me that, actually, what it needs is kasha?'"

9) "Blood is an awkward ingredient in French dishes."

10) "New Yorkers, [Boulud] said, understand that dinner is an adventure. They ask more of the kitchen. They eat the way the French used to eat. Boulud had become a Frenchman who would live in New York and nowhere else."