Last night, the best and the brightest of the LA food world descended on the LACMA to join Eater in feting the 2013 class of Eater Young Guns. Young Guns Jessica Largey of Manresa, Matt Lackey of Flyte, Mike Brown of Travail and Pig Ate My Pizza, Jeremy Hoffman of Restaurant Eve, Ryan Lachaine of Underbelly, Mitch Lienhard of Grace, Hourie Sahakian of Short Cake, Jason Wang of Xi'an Famous Foods all brought their A-game dishes—serving everything from liquid nitrogen Pop Rocks to coca-cola pickles, lamb burgers, and pork belly. Fellow Young Guns Brooks Reitz of the Ordinary, Alyssa DiPasquale of O Ya, Alissa Rozos of St. Jack, Jayce McConnell of Snackbar, Henri Schock of Bottlehouse, and Mark Schieber of Forequarter joined in the fun.

Peruse the party pics and head this way to read all about the 2013 class of Young Gun inductees and learn why they are the industry's next big stars.

A special thanks to all of our Young Guns, to the chefs who cooked and their staff, to the LACMA, Rays and Stark Bar, and Patina Restaurant Group, to the very amazing band Yellow Red Sparks and to our wonderful sponsors Bombay Sapphire East, Agave In the Raw, Kettle Brand Chips, Trumer Pils, Svedka, The Bruery, Apothic Wines, Eco-Eats Partyware, and Choose Chicago. Hangover observations are ahead:

- The longest line of the night was for Jason Wang's lamb burgers from Xi'an Famous Foods. The most popular ingredient for many of the chefs: burrata.

- A+ for showmanship: Mike Brown and his Travail/Pig Ate My Pizza team presented their burrata dish on the backs of party-goers' hands and followed it up with Pop Rocks frozen in liquid nitrogen. Plus they dropped about $50 at Dylan's Candy Bar just so they could throw gummy candy (and maybe later a bit of liquid nitrogen) into the crowd.

- Austin's Shion Aikawa brought an amazing entourage to the event, which included his very proud mother. 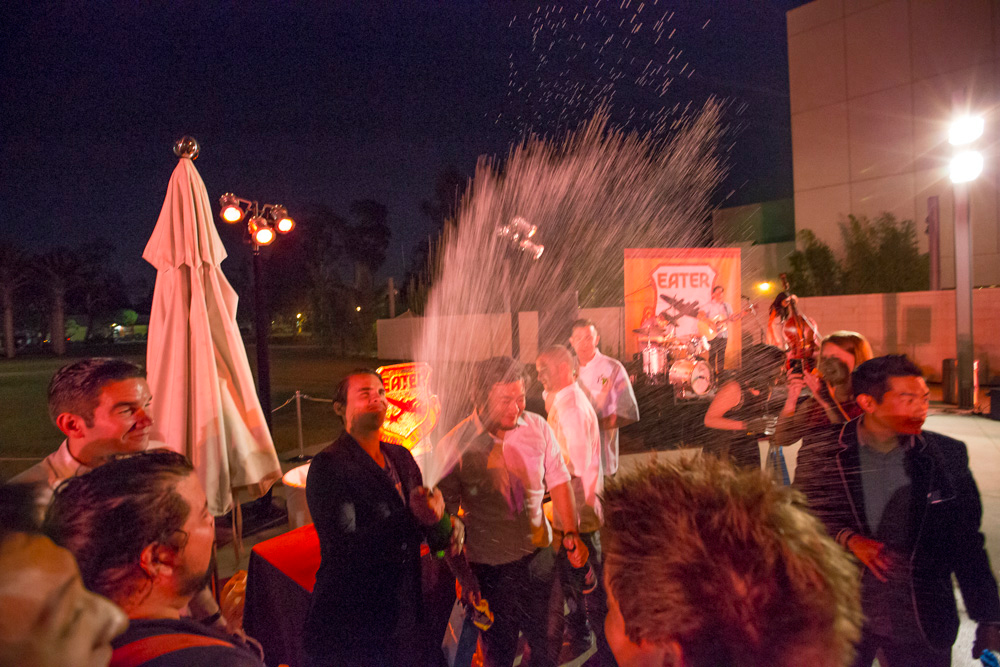 - To the Young Guns: if, without your knowledge, your award was opened and dispensed in the champagne-spewing melee that followed the announcement (see above), we'll get you a new one.

- Big ups to the major leaguers who came out to support (and in some cases sous for) their Young Guns: Tim and Nancy Cushman of O Ya, John Currence of Snackbar and City Grocery, Chris Shepherd of Underbelly, and Curtis Duffy of Grace.

- Where did 75 percent of the Young Guns eat while in town? Son of a Gun and Animal. Other favorites: Bestia, Gjelina, Bay Cities.

- The after party went down at The Roosevelt Hotel's impossibly hip The Spare Room. Apparently Monday night is bowling league night, but the bar's two lanes opened up around the 2 a.m. mark.

- A 3 a.m. sighting: an unnamed Young Gun and entourage jumping in a cab to find pancakes.