Eater Young Gun semi-finalist Mark Schieber originally went into art, not food. But since there "weren't a whole lot of jobs for people who spent four years learning about drawing" when he graduated art school, he got into the restaurant business, eventually landing a gig at the Iron Horse Hotel, where he learned fine dining techniques under chef de cuisine David G. Wolfe. Last year, he moved to Madison, Wisconsin to work at the catering arm of the Underground Kitchen Collective, a progressive butcher shop there, and then helped to open the group's restaurant Forequarter, where he now runs the kitchen.

Like many restaurants in Madison, Forequarter focuses on what's seasonal, what's local, but they are also more adventurous, more creative, more experimental than most, perhaps in part due to their massive test kitchen. Says Schieber's former boss Wolf, "The Underground crew in Madison is a group of inspirational minds. Some of the oldest techniques known to man are practiced within their walls and it shows with the incredible consistency they provide in their product. I can only know Mark is in a great place there, and will become one more of Wisconsin's most important individuals in the industry of food we all devote our lives to."

Now, get to know Schieber through eight of his dishes: 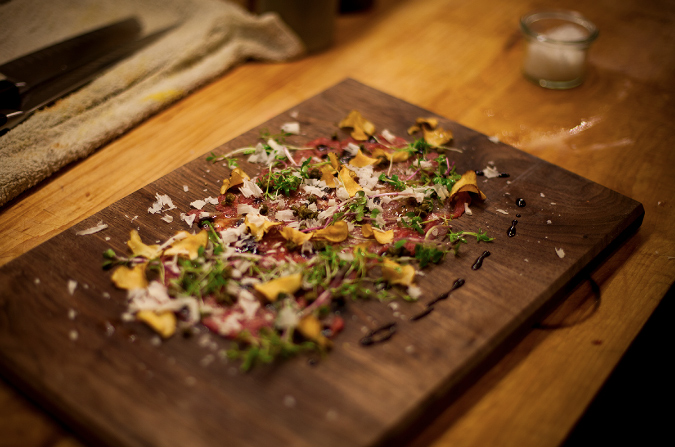 "We had had a whole lot of beef come in from the butcher shop that week and they had some extra tenderloin that they didn't have room for. We took it to the restaurant and I think this is a more interesting way to serve beef than a steak. It's pretty simple: it's beef carpaccio, micro green salad, sunchoke chips, and a black olive carmel. This was from this past winter. We wanted something light and fresh but still focused on the beef. We have really great quality beef—you don't have to do a whole lot to make it taste good." 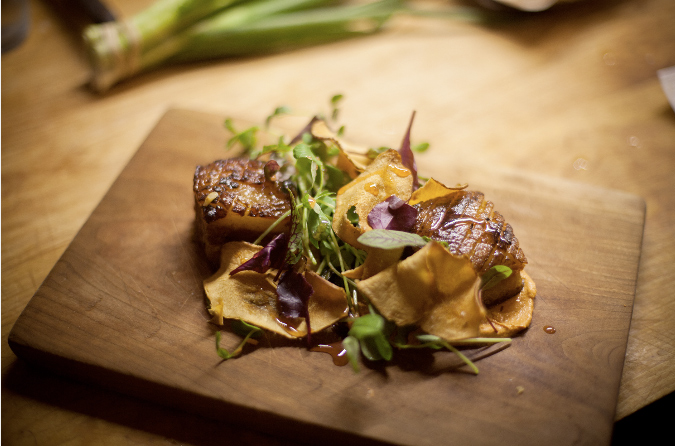 "That we ran as a special two weeks ago. This was with sunchokes and a romesco that I made really almond forward. This is something that's so rich and fatty and we're actually trying to keep it really light. It's two hunks of pork and a lot of vegetables, which is how I like it." 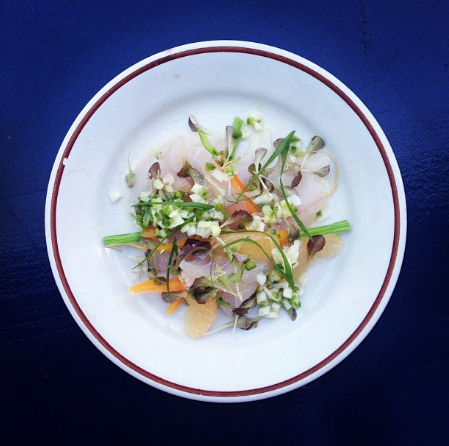 "We had been getting fish from this company called Sea to Table and they do really great seafood stuff, and our rep called me and said 'Hey is there anything you want besides tilefish?' I had never worked with fluke before and they had this sushi quality fluke and overnighted it. We did a ceviche with some of it. Just really lightly blanched baby carrots and grapefruit and hazelnuts and a jalapeno vinaigrette. Clean, light, and springlike." 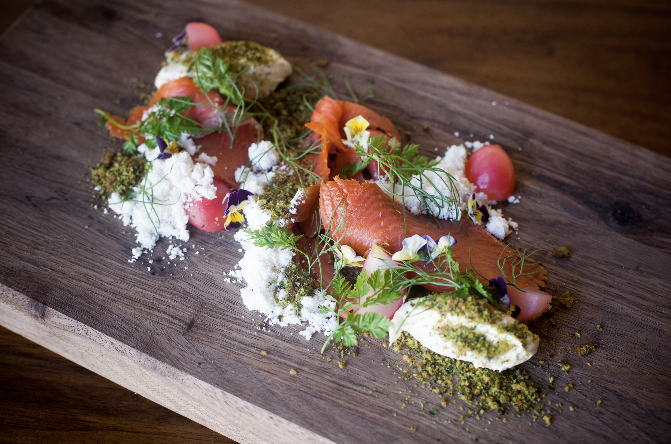 "That's something we do frequently. It's just really great sockeye salmon. I've been trying to take a riff on gravlax but make it Midwestern. So we make a real herby spiced cure and then add bourbon to it, so it feels like wet sand. Then we cure it for five to six days, let it dry for a day and then cold smoke it. It's a perfect sweet/salty balance and the bourbon gives it a floral quality that's really good. We serve it with whipped cream cheese, brown butter powder, herbed breadcrumbs, chervil, pickled radishes." 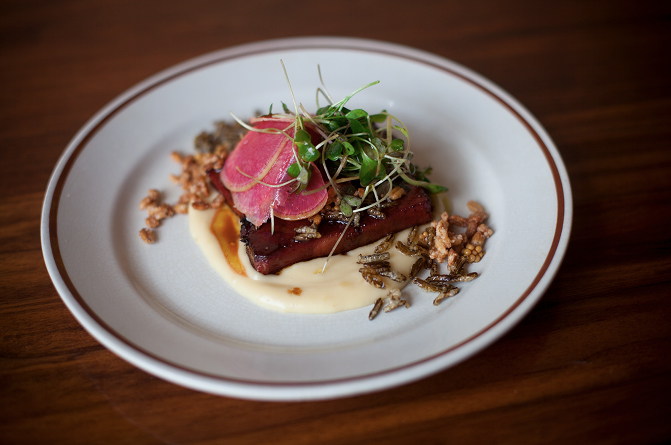 "That was actually one of the first dishes that I did for the restaurant. We wanted to figure out a way to have a good beef option on the menu, and we have a not really great functioning hood. We can do steaks, but it just makes things smokey sometimes. I did this thing with the tongue where I treated it the way you would treat shortribs. Brined it, cooked it sous vide, took it out, trimmed it, pressed it. Once it's cooled it's a really really nice texture. It's slightly firm but cuts like butter, a really really great beefy flavor that you get from the tongue. Then we just sear it, put it into the braising liquid, and braise it until it's nicely coated and serve it with puffed grains, pickled mustard seeds, salad of radish and microgreens with sherry vinaigrette." 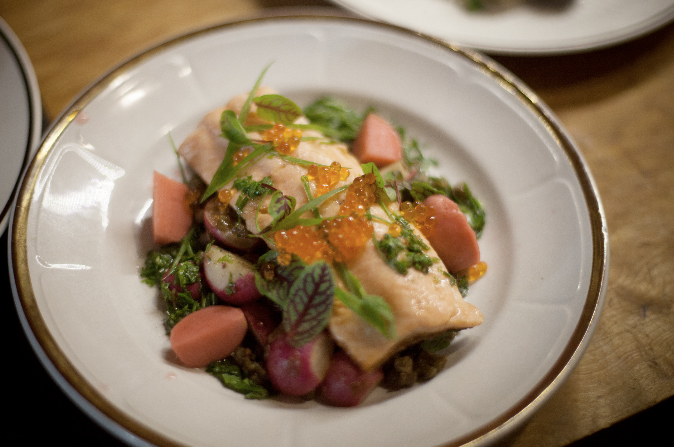 "That's what we're ding right now, sauteed trout. We get really nice trout from a farm 30 minutes from here and serve it over black lentils with sauteed and pickled radishes and scallions and some red sorrel, and dressed with a vinaigrette. It's one of the most popular dishes." 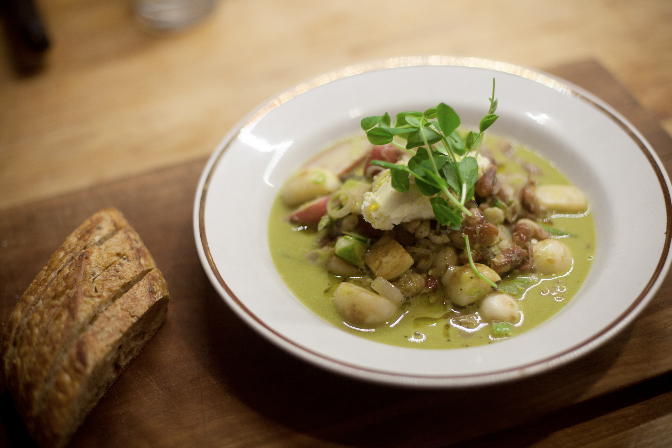 "That's pretty basic. Our way of satisfying vegetarians that come in. We don't have a whole lot of vegetarian stuff on the menu but that's pretty good, and it's a staff favorite because everyone's sick of eating pork all the time. This is a bright spring stew. We use whatever vegetables we're getting that week that look really nice. Bean and vegetables in a lemony broth, and we blend a pistou into it so it's lemony and bright. 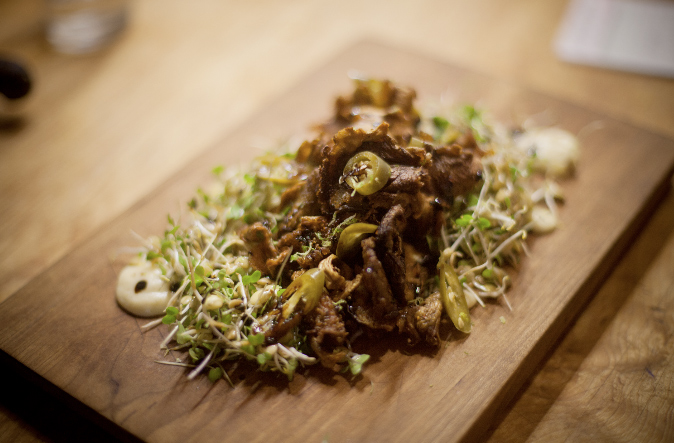 "That's another really popular thing, and that's vegetarian too. We had had a different mushroom salad that was a panzanella. It was good, but we had this funky runny cheese and the season was over for it. We needed to come up with something different since we have a really good mushroom farmer. I was talking to [co-owner] Johnny and I always like to give him crap about loving hippie ingredients. So I came up with that salad thinking, 'How can I come up with a hippie food dish that I actually want to eat?' It's sprouted lentils, chile lemon juice, deep friend mushrooms, a little reduced balsamic, then pickled Serrano on it, and this sort of salted lime curd. We jokingly call it the hippie nachos."