Hourie Sahakian, 25, never had a job in the food industry before helming the oven at Short Cake. It started out with a fortuitous meeting and eventual friendship with Amy Pressman, one of the most influential culinary minds Los Angeles had ever seen. Pressman and Nancy Silverton, who had worked together thirty years prior at the original Spago and had been friends ever since, were working on the burger restaurant Short Order and adjacent bakery Short Cake at the iconic Farmer's Market on Third and Fairfax in L.A. Tragically, Pressman passed away from cancer just before the opening of Short Cake. Sahakian has carried on Pressman's legacy by creating American-style pastries and baked goods at this cheerful, expansive bakery, continually learning to master the art of baking from her mentor Nancy Silverton. Below, Sahakian talks to Eater about the development of Short Cake and her plans to expand its reach in across L.A.

How did you meet Amy Pressman?
I met her when I was working at the gym. I was working at a toy company and its gym. Coming out of high school, I had a scholarship to a culinary institute, but I chose to go to the college in Santa Barbara. When we met, she described us as "food soul mates." I didn't really know who she was. I didn't know how involved she was in the industry. She would sometimes throw me to the fire and work culinary events, like one-off dinners at Test Kitchen (back in 2010). She had invited me to eat at dinner, but I ended up working the line with her, and work with other chefs like Ricardo Zarate (Picca), Seth Greenberg (The Penthouse Hotel). She'd throw me in and everyone asked me, "Have you done this before? Because it seems like you have." After those stints, she made up her mind that she wanted me to be involved with whatever she was going to do.

How did you get into baking and cooking?
I've been baking my whole life. My mom was a great cook but my grandma was the baker of the family. From there, I took food classes in middle school and high school.

How did you get plugged into Short Cake?
At the time, Short Order was in progress, but Short Cake was an opportunity that came about afterwards. She knew I was passionate about baking so we set out to plan the bakery together. She ended up getting really sick, so I quit my job and took care of her. I started leading the project with her full-time.

How long have you been doing this?
Barely two years. I oversee everything at the bakery, front of house, back of house, coffee program, and menu development.

What are your two favorite things on the menu?
The twice-baked hazelnut croissant and the brunette are tied. The croissant happened when Amy and I were brainstorming. Early on in the development of Short Cake, we wanted to figure out if we were a European-style bakery or an Americana bakery with a twist. We ended up the Americana concept, we wanted everything to be a little bit different. People would come wanted to try an almond croissant, and they'd end up trying a hazelnut croissant. At first we didn't have an almond croissant on the menu, but initially we only had the hazelnut.

When people see something familiar, they tend to go with that, but we wanted to give people the option of exploring flavors. That's the same with the brunette. I love blondies and so did Amy, we knew we wanted to have a type of one on the menu. We played with the idea, and I wondered if we put pinenuts and thyme on it? I did a test batch and brought it to a burger tasting at Mozza. We both loved it and that was one of my first interactions with Nancy Silverton. After one bite, Nancy loved it and said it was perfect. 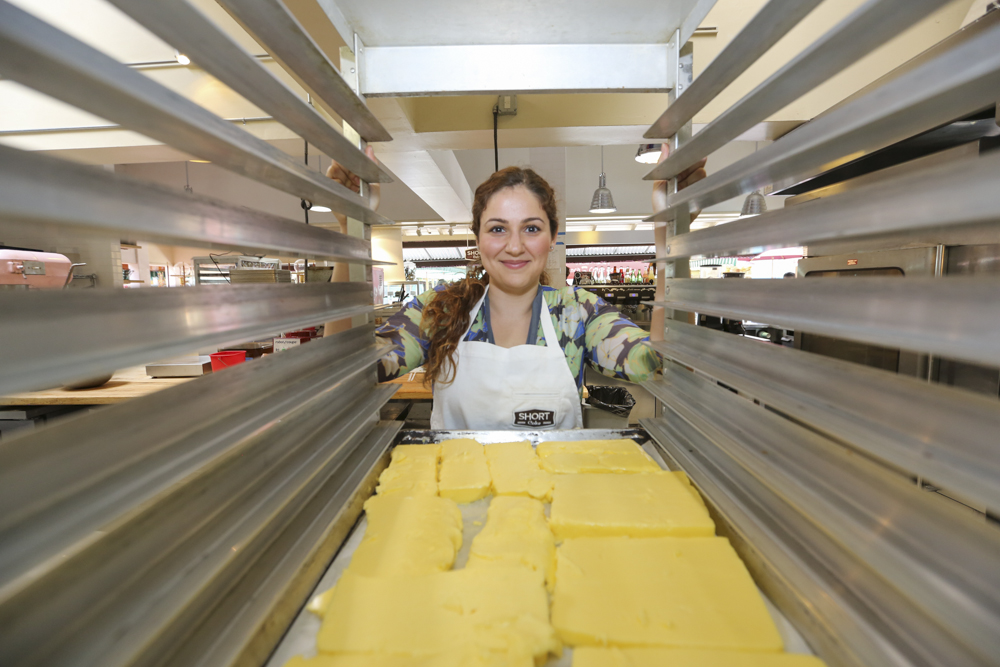 How did it feel when Nancy Silverton gave you that kind of endorsement?
It was awesome! I think at the time, I appreciated it, but I didn't know how much it meant for Nancy to say something was perfect immediately. I remember I was driving Amy back home and she said, "Do you realize what just happened?" I didn't work with Nancy so I didn't know what she was like and so Amy told me to soak in this moment. She said, "Can you soak in this moment where Nancy Silverton told you something you made on your first try was perfect?" Little did I know that I would end up working with Nancy and eventually became my mentor after we lost Amy.

That streak didn't continue?
Nancy definitely liked things I was working on, but it's rare to knock something out of the park on your first try. There's definitely a minimum of three versions of something until you get it. Nancy has been an incredible mentor and I think Amy would be proud of her bakery.

How is it interacting with others despite your age?
I feel like I'm really good with people. I was the class president of my high school. From a young age I've always taken on leadership rolls. This bakery runs for 24 hours a day, all day and it never sleeps. We're always working on something. Working with people that long, you learn peoples' strengths and weaknesses, you learn to encourage them better. I have a really strong team here.

How do you think Short Cake fits with the rest of the culinary scene in L.A.?
There's a certain respect for the quality level of the product. Everything's been meticulously sourced. With other bakeries, people are seeking out certain items. With us, you get a lot of people at the Farmer's Market that are just passing by, so they're not going to realize you're using Straus Creamery butter. But in general people have been very receptive. The only difficult situation sometimes is that locals don't like to battle with finding parking. But parking is just one of the challenges, there's no such thing as a perfect location.

And you're moving into LAX right now, what's that like?
It's going to be great, we're going to have a lunch program, a coffee program like the one we have here. The pastries will be shipped every morning to inside Tom Bradley International Terminal. At the moment we don't have any further plans to expand, but it isn't out of the question going forward.

What do you judge when you go to other bakeries?
I always love to see how other bakers handle the basics, like pie crust, chocolate chip cookies, and croissants.

Would you ever make a cronut?
We have no plans to make a cronut. We make croissants and we make brioche donuts. There's no need for cronuts on the menu.

Do you feel like you're where you want to be in your career?
This is very much my bakery. It's hard to predict what's going to happen, and I care too much about quality of what we're doing to compromise. I'm always hoping to be better and more efficient. The menu won't ever expand at this point, but we might swap things out.