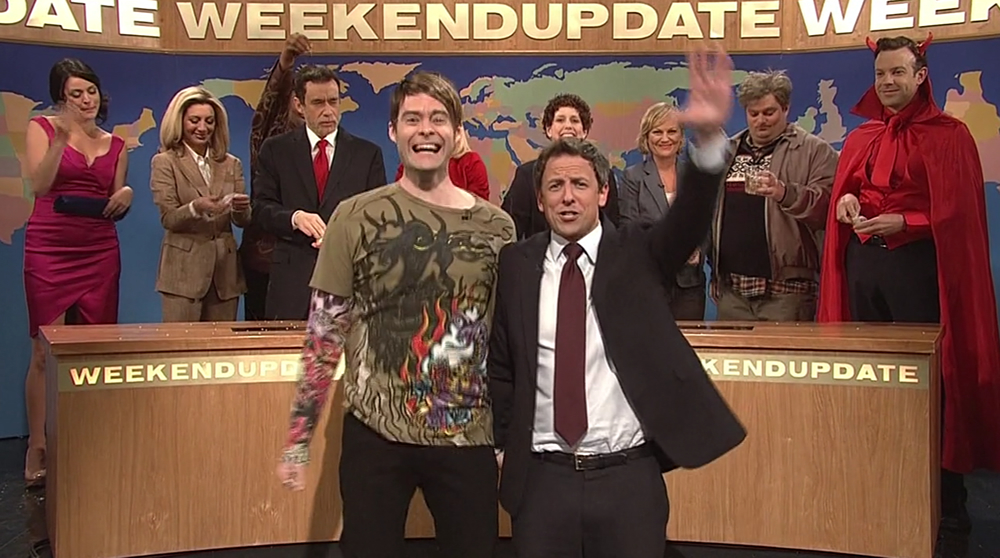 Last night on the season finale of Saturday Night Live, Weekend Update's city correspondent and tweaked-out club kid Stefon (played by Bill Hader) returned to recommend places for tourists visiting New York City in the Summer. Hader, who had been on SNL for eight seasons, announced last week that he was leaving the show, so SNL gave him (and Stefon) a huge send-off.

After a fight with anchor Seth Meyers, Stefon ran off to a church to marry CNN anchor Anderson Cooper. The wedding was, of course, attended by some of the many nightclub characters referenced by Stefon throughout the years. And this wedding had everyone: human parking cones, hobocops (homeless Robocops), Alf in a trenchcoat, Gizblow (the coked-up Gremlin), Germfs (German smurfs), Menorah the Explorer, a Furkle (a fat Urkle), DJ Baby Bok Choy (who "spins records with his little ravioli hands"), and more. Fisticuffs ensue.

Stefon has appeared on SNL fifteen times (see clips on Eater National and Eater NY). Hader told GQ the other day that there won't be a Stefon movie because there's "no emotional through line." So this is effectively the end of Stefon. Watch:

New York's hottest club is PANTS. Located on that fake street from Seinfeld, this bed bug bridal barn finally answers the question, "Y'all ready to play the Feud?" This place has everything: hopscotch, double dutch, Oogieloves, sling and mesh bladder implants, the table from Charlie Rose... The bouncer is a king-size lesbian who looks like Phil Jackson. And the password is "SCOTTY." And if that isn't enough for you, you can hit the dance floor with a room full of human magic eightballs... it's that thing, of when you ask a question, so you shake a midget until he says, "Ask again later."

Restaurant Groups Are Flocking to Nashville