This is The Gatekeepers, in which Eater roams the world meeting the fine ladies and gentlemen that stand between you and some of the restaurant world's hottest tables. 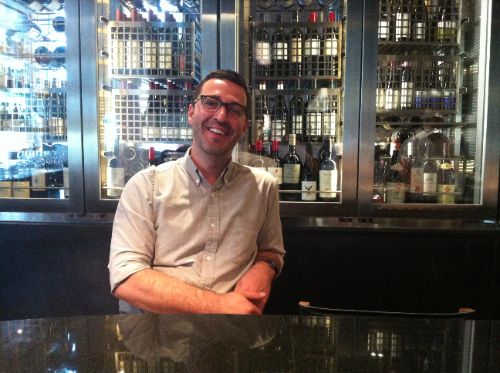 In September 2012, Momofuku empire builder David Chang opened four Momofuku concepts under one roof in downtown Toronto, bringing his brand of pork buns and ramen to Canada for the first time. The high-profile spots — an iteration of his East Village hotspot Noodle Bar, bar/lounge Nikai, the Ssam Bar-like Daisho, and tasting-menu only Shoto — occupy a glass cube adjacent to downtown's Shangri-La Hotel, inviting an intense spotlight ever since.

Luckily, Momofuku Toronto service director Steve Sousa had major experience opening high-profile concepts (prior to Momofuku, he started the food and beverage programs at Toronto's Trump International Hotel). At the 80-seat, third-floor Daisho, Sousa oversees the spot's focus on "large-format," family-style dining, featuring dishes like the familiar bo ssäm, a whole pork butt served with a dozen oysters. Here, he talks to Eater about Daisho's family-style approach, guiding guests through the cube, and the paparazzi-like nature of carving a $600 ribeye tableside.

It's 8p.m. on a Saturday. What's the wait for a table?
On a Saturday night, the wait for a table is usually around an hour. But the beauty of this space is that there are many options. So, you can go down to Noodle Bar if you wanted to, we have the cocktail lounge, Nikai, on the second floor, which is a great space to have a cocktail before you come up to Daisho, and you can have a snack there. Sometimes we find that people get so comfortable there that they're happy to stay. There's always something going on and always openings coming up, so the wait's never that long.

Yes, tell me a little bit about the flow of the building. I imagine diners might get confused, so how do you guide people to where they want to be?
[Guests] walk in off the University Street entrance into Noodle Bar. It's on the ground floor and has 70 seats; if that's what you're looking for, we usually get you in. There's never a huge wait. Although sometimes you may have to wait; if that's the case, you can go up to Nikai, our cocktail lounge — we have a great cocktail list, local wines on the list, and if you want to snack, you can have snacks from Noodle Bar or Daisho. And the third floor has Daisho and Shoto, so there's two restaurants side-by-side. Our team is pretty well-versed in guiding people to where they need to be. Often, people are not sure what they want, so we give them some details about each space and that way we can figure out what they're in the mood for and steer them in the right direction.

David Chang coming to Toronto with four concepts obviously created a lot of buzz. Are most of the diners who come in informed about Momofuku and know what to expect?
I think most people are. But it's a very unique space in that there's four concepts under one roof. I think in any city, people would be somewhat confused, and that's the beauty of this space — people come in and they're discovering something every time they come in. People come into Noodle Bar on the ground floor; they come in another time and venture up to the third floor and don't even know we were here. That's kind of the beauty of the space, there's always something different.

Do you hear a lot of comparisons between the Toronto and NYC restaurants?
It's happening a bit more often now, because there's a lot of people taking weekend trips, and there's a lot of business travelers coming from New York to Toronto and vice-versa. And it's always great to hear people who come here for the first time and are familiar with the New York restaurants, and it's another place where they can come and enjoy a similar experience, but here in Toronto.

Is there a common comment they might have in comparing the two?
That there's a lot more space in Toronto than there is in New York. We have people coming in and there's obviously a common thread with all the Momofuku restaurants, but it's a unique space.

How often do people order the $600 whole ribeye?
We get it pretty often — several times a week — and I'm the lucky guy that gets to carve it. It turns a lot of heads in the dining room. People ask if they can take my picture; people get out of their seats, literally, to come and check it out. I think there's not a lot of restaurants that do the tableside [service], or have servers be part of the plating or production of the dish. And when you get a piece of meat that big? I took lessons from [longtime Momofuku alum] Sam Gelman, our executive chef here — I took video of him doing it, actually, and I don't know too many restaurants in the city that do that. It's just a great experience to watch that be carved. I carve the cap first, serve that to the guests, carve the rest of the beef. There's usually so much left that guests get to take it home. It's just visually amazing, it's a great experience. And again, it turns a lot of heads in the dining room.

Whats the most popular large-format meal, and have smaller parties ever tackled a whole one?
It's all over [the place]. I think the pork butt is really popular. We've added a lobster since we've opened. That's slowly gaining popularity. Especially over the summer, it's going to be one of the dishes people keep calling for. We've had a lot of guests come back specifically for that dish. I've seen, that's what's kind of amazing here too, is that people get so excited that they order more food than I think people can even eat. And I've seen two people eat the lobster [designed for four to six diners], I've seen eight people eat the lobster. It really depends on your appetite.

Have you gotten any outrageous requests from guests?
People asking to take my picture while I'm carving. In Toronto, it's a bit strange, but people don't like counter seating. So they're always a bit miffed when they're seated at the counter; but in my opinion, it's one of the best places in the restaurant to sit. It's just more intimate, you usually have a bartender you can have some dialogue with, ask questions, and they're always there when you need something. That's probably the biggest one.

What's the most important Gatekeeper tool?
Must-have gatekeeper tool, here, is definitely teamwork. Having so much going on in this building, we're really fortunate in the fact we have a team in New York who can assist with us; we have Tara MacMullen from New York, who's with us now. Everyone in this building is really just helping each other out. We have [a system] called dovetailing, which is just filling in the gaps and anything that needs to get done, we help each other with.

Any last words?
I think people should check us out because it's unique to Toronto. We've tried to feature as much of what's good about Toronto, and what's good about Canada. We have great local wine, we have a great Canadian whiskey program that we've initiated recently. We have great purveyors that we work with, and there's just a lot of great products that are coming out of this part of Ontario and this part of Canada that we really want to feature.