12 Chefs Pick the Restaurants Where They Love to Splurge

Share All sharing options for: 12 Chefs Pick the Restaurants Where They Love to Splurge

Here are a bunch restaurants where chefs and restaurateurs love to go all-out and splurge when they can. Though usually they don't have the means — or the time — to do things like hop on a private jet whenever they want, chefs perhaps know best where to find show-stopping meals around the U.S. and the globe. These are places operating at the highest level, where the chefs and owners spare no expense to provide the best food and service around. And when colleagues are in the house, it only gets more extreme. The stereotypical whales may shell out the most dough, but odds are they're having way less food, booze, and fun than the restaurant people who come to the same places.

"I don't know if you've seen my salary lately, but splurging isn't really on my agenda. I'm always saving my money because I like to try the big new places to see what other chefs are doing, so I rarely go back to a place twice. However, I just ate at Atera for the first time and I know that the next time I'm feeling flush, I'm going back. He's really doing something different and new and I definitely want to try more of it."

"I love to splurge at the restaurants of chefs that I used to work with. Grant Achatz and I worked together over a decade ago at The French Laundry, and clearly, he has grown to be beyond successful since then. But to see the making of a chef and food style blossom into a restaurant like Alinea is very inspiring. During my most recent meal at Alinea, right in the middle of dinner, we were ushered to another room where a whole roasted pig was waiting and 10 strangers were all seated simultaneously. It wasn't just crazy good food — it was a social experiment. Way over the top."

"Typically, when I treat myself, I want to go somewhere and recognize a fellow restaurateur or chef who is doing a great job. Being a part of the hospitality industry you always want to return the favor and visit your friends and counterparts.

About a month after Le Bec Fin reopened, I went in to try it out. We did the full tasting menu, 15-courses, bottles of champagne and wine. It's these types of dinners where you purchase something that the sommelier recommends and you let your experience be exactly the way the chef would want it to be like. It was fantastic.

More recently, I dined at Brooklyn Fare, which is the perfect example of high quality taste and execution. You should — and can — expect it to be awesome. For the most part, I don't want to take a risk when I'm splurging on dinner. When you're splurging you don't want to chance having a bad experience, go with what you know." 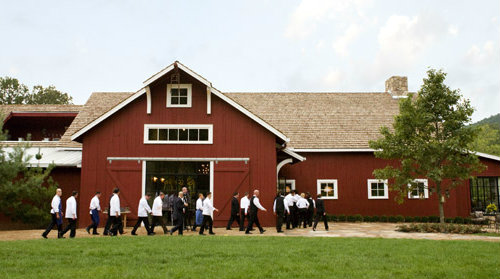 "For special occasions, there's no better place than Blackberry Farm in Tennessee. Many of the ingredients that the chefs cook with are grown on the farm. The wine cellar is stocked with some of the best bottles, and the farm also has a small brewery. The whole atmosphere of The Smoky Mountains plus the delicious food and drink makes it ideal."

"Eleven Madison Park is definitely one of my favorites. It's a totally different approach to fine dining, the experience is unlike many you would find in America. The attention to service rounds out the meal, proving that it's not just about what is on your plate. This restaurant is worth it every time."

"Søllerød Kro in Denmark, no doubt. It's a great modernized but classic place. Jan Restorff, the restaurant manager, is a true Danish institution, and he knows how to really make you want to go full throttle. The wine list is enormous and the food really solid."

"I'm not much of a blowout guy, I'm way more of a Joe's Pizza slice eaten standing up guy. But if I was gonna just go nuts and throw caution to the wind, it would have to be Blue Hill at Stone Barns, one of my favorite places. Everything about it rules. The bucolic farm-y setting (check out that goat!), the crazy delicious and smart food (yes, it tastes smart — and never feels derivative). Those guys really make the rest of us restaurant chuckleheads down in the city look like total clowns.

On a future occasion, I'd do a tasting menu of just finger foods. No silverware. Nothing plated. Think they'd let me do that? After all, I am paying blowout rates. Out on their patio, you know, in like, early September when all the tomatoes and plums and peaches and eggplants are at their pinnacle. A couple stellar bottles of wine. And a train ride back to the city. God, that sounds ideal. Yeah, that's my blowout."

"There are so, so many places. I'd say Alain Passard's L'Arpège in Paris, where after my meal — the ones I've had in the past have usually left me speechless — we'd smoke a cigar until 3 in the morning. Another option for a lavish night is Guy Savoy, also in Paris. Savoy is more whimsical, his food is fun and clever."

"I love traveling to the West Coast to celebrate special occasions. It really does seem like a world away from my home here in the Lowcountry. San Francisco is an amazing city, and no one is doing food as thoughtful and delicious as Daniel Patterson. Eating at Coi is a stunning, intellectual experience that always inspires me to be a better cook. Dining at Coi is like dining in another country. Daniel is one of the most brilliant chefs of our generation."

[Photo: A Life Worth Eating]

"For a really special night, I would have to say Urasawa. Like Masa before him, chef Hiro offers an experience that is unique. Eating at Urasawa is an immersion into a different world — one that is serene, focused, and full of beauty."

"The first destination would have to be Meadowood in St. Helena, California. Chef Christopher Kostow's cuisine is thoughtful and delicious. The staff of the restaurant and the entire property show true hospitality and graciousness. It's very poetic, to say the least. The property itself is a wonderful oasis from the urban intensity we all live in today.

In Chicago, I love making the rare call to reserve a keiseki menu from Katsu. Katsu is the best with fish in the city. It's a wonderful hidden gem, where there's great technique and bold flavors on display."

"I'm sure many suggestions on this list will be for high-end sushi. My choice would be Joshua Skenes' Saison for the same reasons. Just like a high-end sushi place, it's expensive, low volume, and uses excellent ingredients.