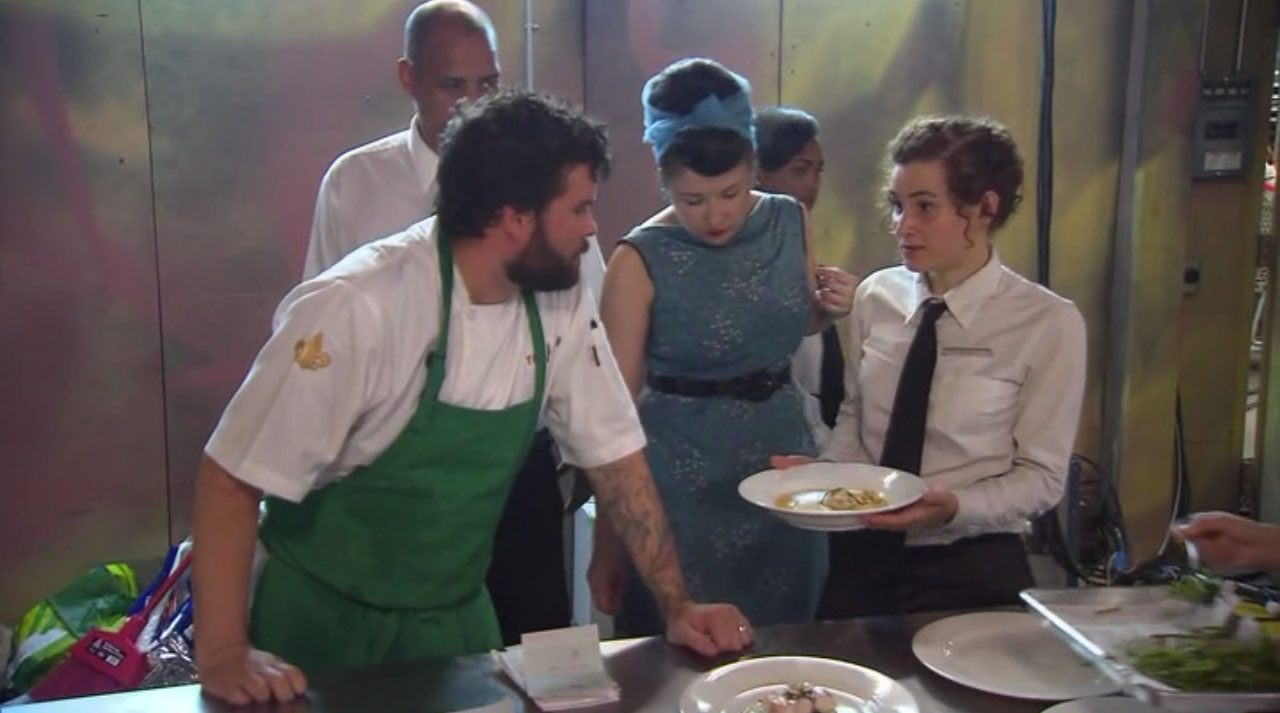 Did you guys miss Top Chef last week while they were off for Thanksgiving? I didn't, really. My holiday was basically an episode of the show: there was a lot of food, even more judging, and at the end of it I was crying when I got sent home (those were tears of joy though, so there was some difference).

I'm glad that they gave us a week to process Louis Maldonado's elimination. I was a fan of his and sad to see him go. Thankfully, the show is back in a big way with the challenge that is sure to bring out everyone's inner nightmare, Restaurant Wars. 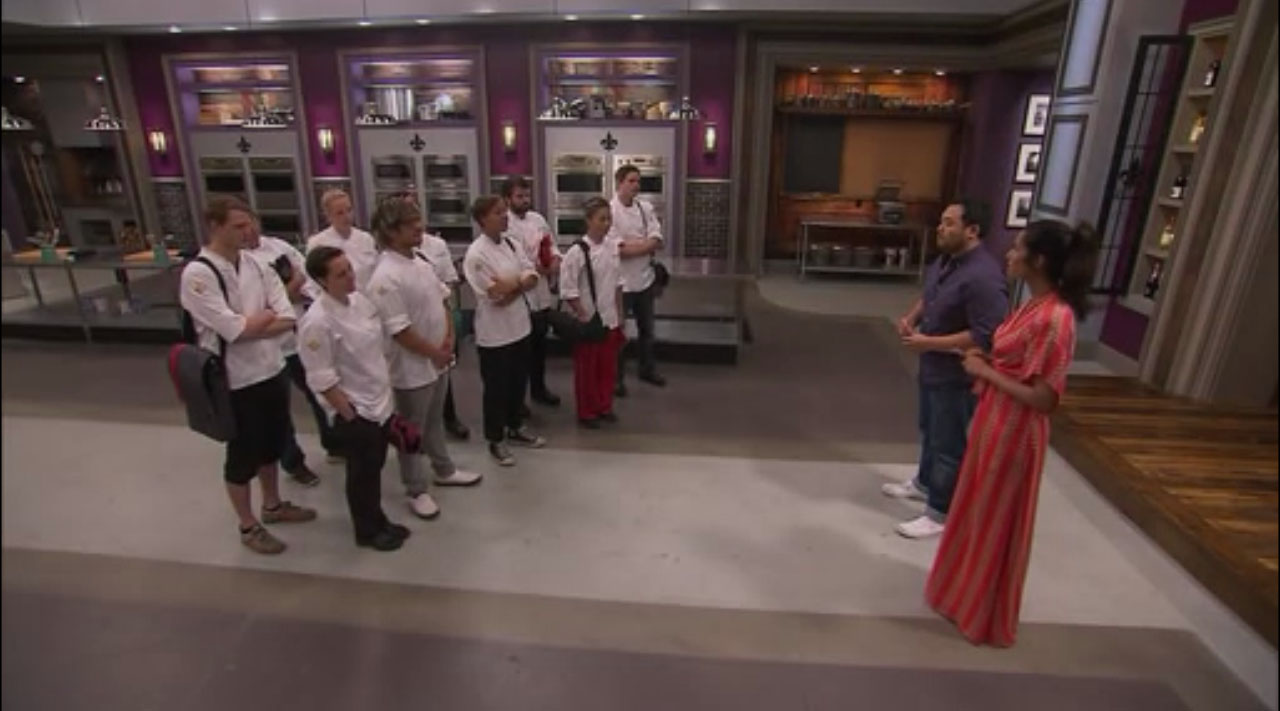 The chefs are greeted by Padma Lakshmi wearing a caftan that I would wear on my yacht in my fantasies where I'm rich and spend enough time on a boat and wearing gold that people think I'm a pirate. She announces that there is no Quickfire Challenge this week since it is Restaurant Wars before introducing guest judge David Chang. The chefs draw knives to determine their teams of five. Each team is charged with conceptualizing and opening an entire restaurant in 24 hours. This is quite a task. I've had dinner plans with friends where it has taken longer than that just to choose a restaurant, and those places already exist and have Yelp reviews.

Padma also tells the chefs that along with patrons and judges, Danny Meyer will be there with a VIP table of Chase Sapphire Cardholders dining at both restaurants. We know it isn't gratuitous product placement because she mentions with a pandering smile on her face that Chase Sapphire members earn double the points on dining out and travel. 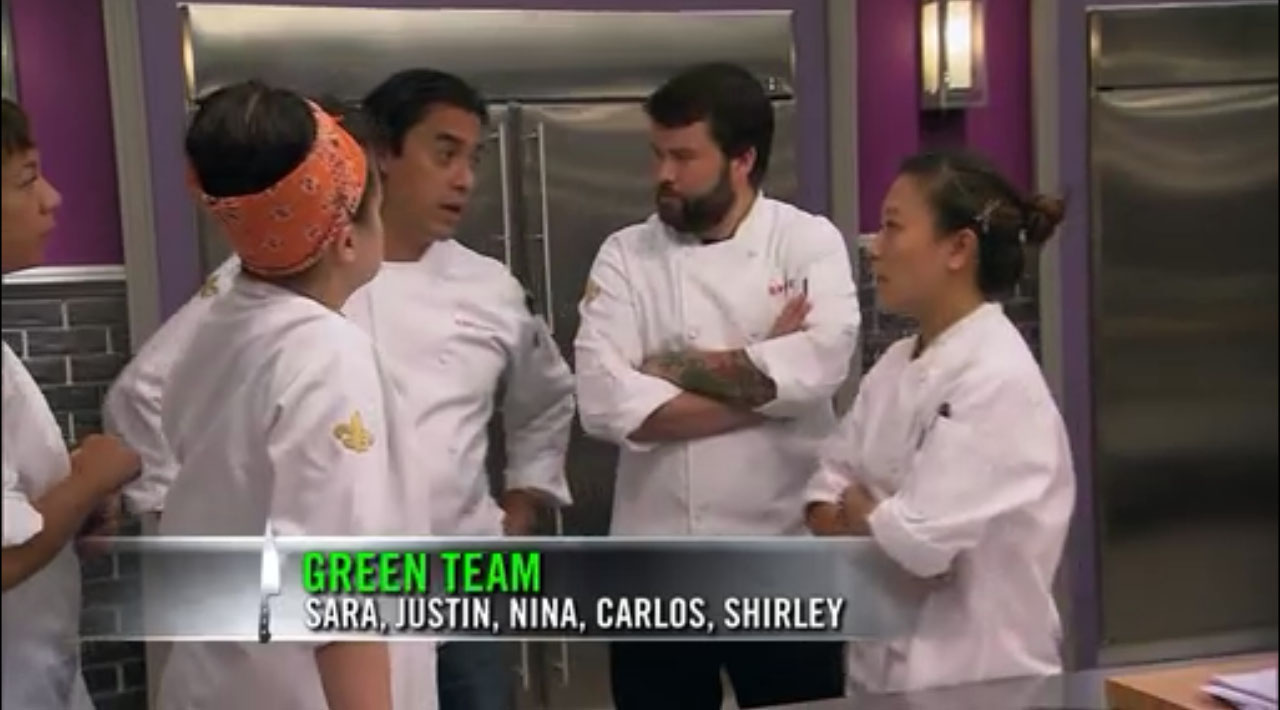 The green team is Carlos Gaytan, Justin Devillier, Nina Compton, Shirley Chung, and Sara Johannes. Justin decides to take on the leadership role as Executive Chef and Sara volunteers to be front of house. 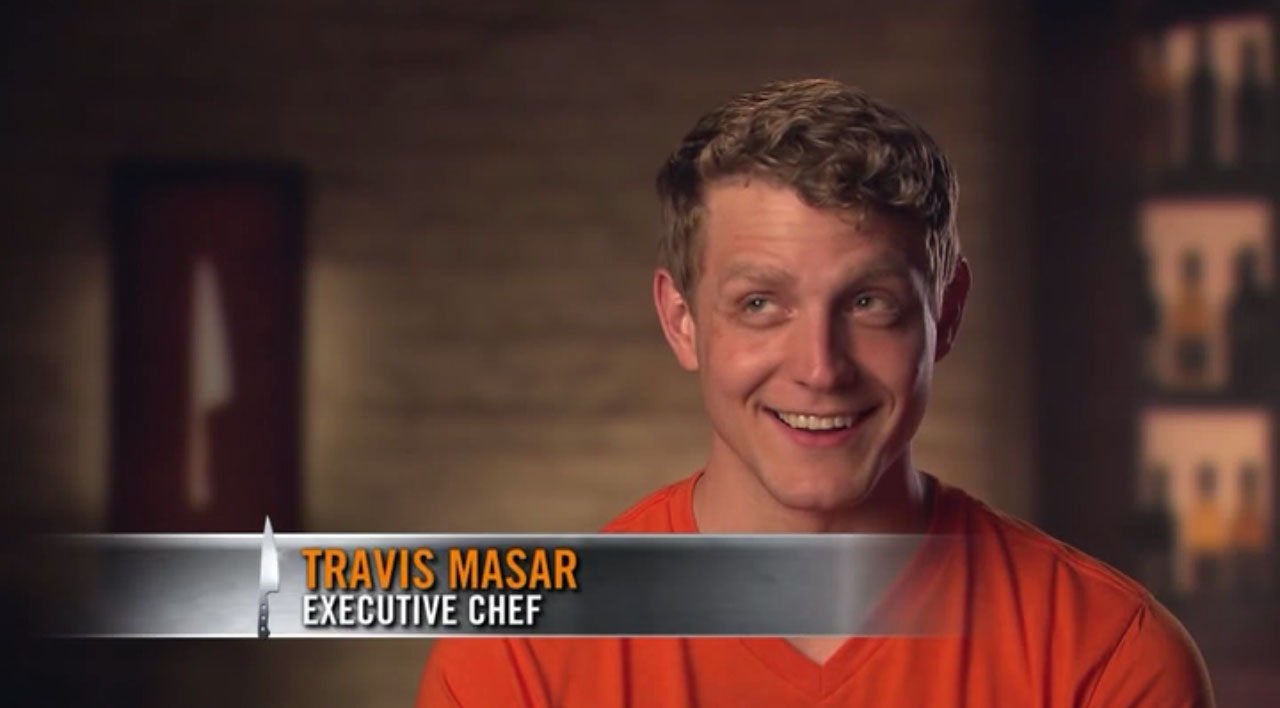 The purple team is Travis Masar, Carrie Mashaney, Nick Elmi, Bryan Huskey, and Stephanie Cmar. Nick wants to be Executive Chef because he has opened a restaurant on his own before, and Travis says that he will work up front, noting, "Gays belong in the front of house, duh."

It's strange to me that in this challenge chefs are judged on how well they work as a front of house manager. The competition is about cooking and all of the sudden you can be sent home for not being good at smiling and answering questions. It's like if halfway through the Miss America pageant Mario Lopez (because, duh, he hosts that kind of thing) asked the contestants to make a braised lamb shank with balsamic cherry reduction. That wouldn't be fair at all. I mean, for starters, those women probably don't even eat. 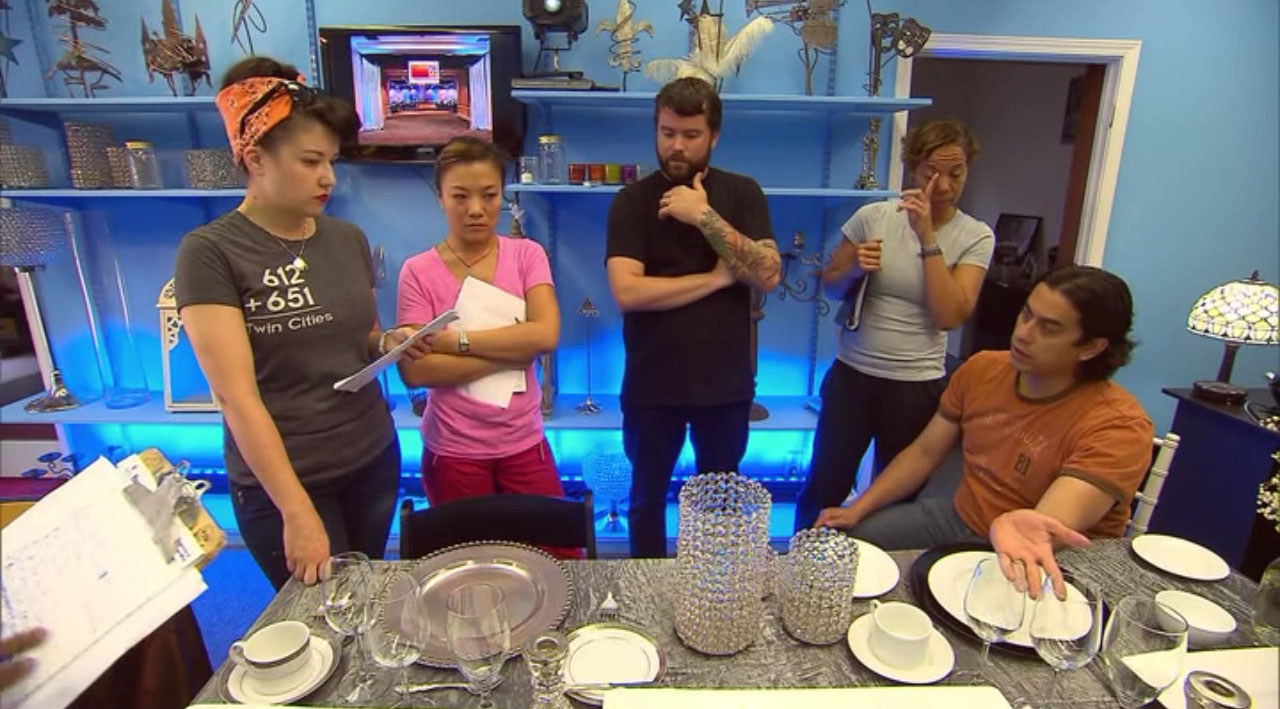 The teams plan their menus, with the green team deciding to do "upscale casual modern American," which sounds less like a restaurant concept and more like the chant of Captain Planet's Planeteers if instead of a superhero he was an investment banker in Manhattan. Off the bat the team is fighting. Carlos gets angry at everyone for putting the cart before the horse and talking about decor and flatware before they have even discussed what dishes they are doing. I get it though, it's hard not to get caught up in that stuff. Like, I already know exactly what the table settings will look like at my wedding, and the last time I went on a date was two years ago which ended with him comparing his life to Entourage and me running away screaming.

The purple team opts for a seafood theme with their restaurant, naming it Fin. They have a fairly easy time planning the menu, dividing up tasks, and conceptualizing the restaurant as a whole. On the other hand, the green team is fighting at every decision they have to make. While picking out servingware, the tension is so thick that Bill Clinton would hit on it.

Nina and Shirley call Sara to tell her that they couldn't get the molds for the Financiers she planned to make for dessert, so she'll have to figure that out. She's not the only one struggling, however. Bryan accidentally picked up xanthan gum to make his gel when he meant to be using agar agar. I realize that if I had been typing this on my phone, it would have automatically assumed I was typing Xanax. Honestly, it took a lot of effort not to type Xanax anyway.

The teams prep their dishes and have to train the waitstaff with how to run tickets and food. Justin has a system he developed with tickets that Sara teaches the waiters for the green team's restaurant, Found. Travis very thoroughly runs through service with the staff for the purple team. My biggest question is who are these waiters? They seem completely confused at every turn. Are they actually professional servers or are they people Bravo found passed out in the street after Mardi Gras and forced into white button downs and black pants? 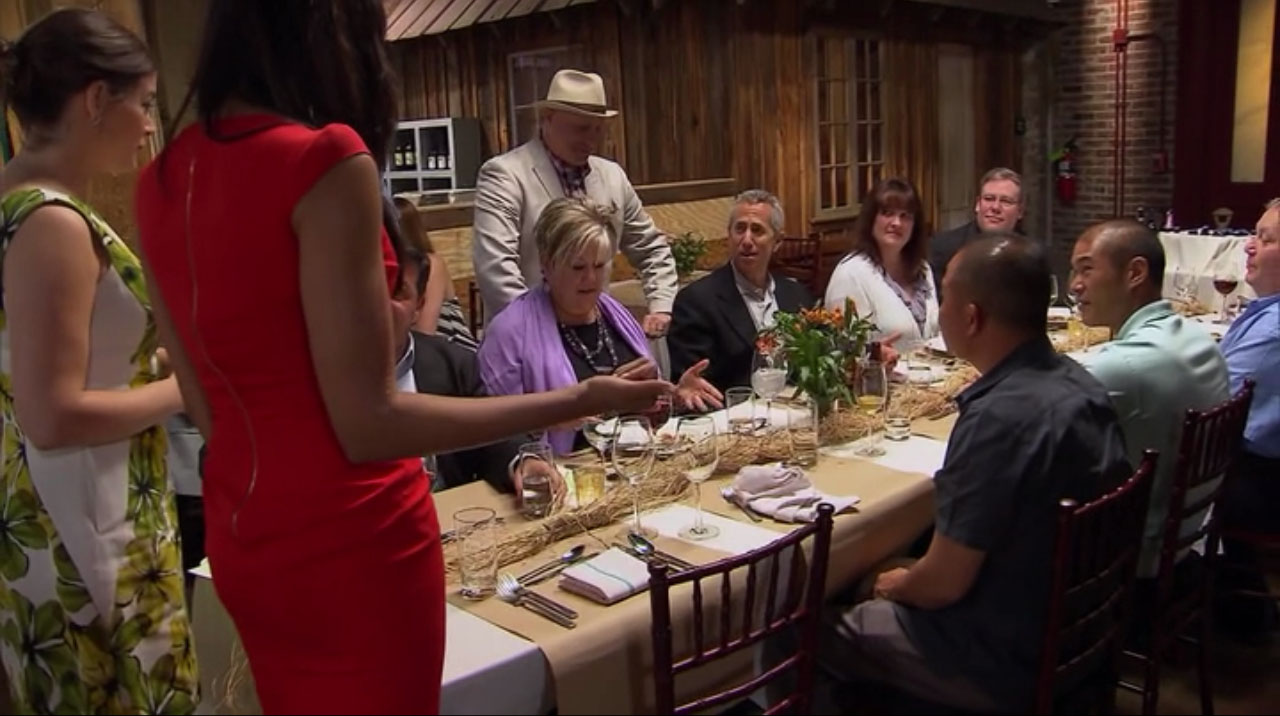 The judges start at Fin, the purple team's restaurant. Tom Colicchio arrives in a fedora. Tom, this is a restaurant, not a nightclub in 2007. Also, what's his hat budget this season? He's worn more different hats than I own bras. To be fair, that puts him at two, but still, it feels like a lot for him. 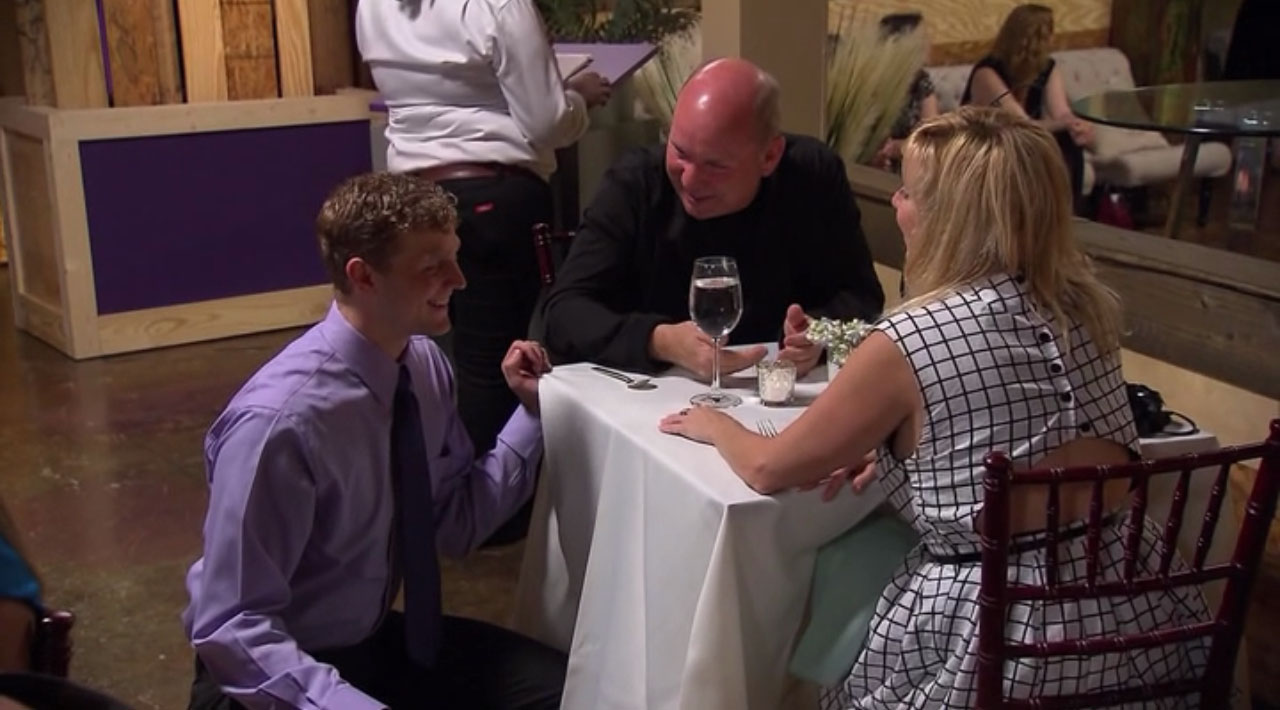 Service at Fin is excellent and all of the judges note that Travis handles the front of house very well. The meal starts with Bryan's scallop crudo with corn and squash relish and purple corn gel which the judges don't love, mostly because of the gel. They enjoy the flavor in Carrie's gulf shrimp with chickpea puree, though it's on the greasy side. 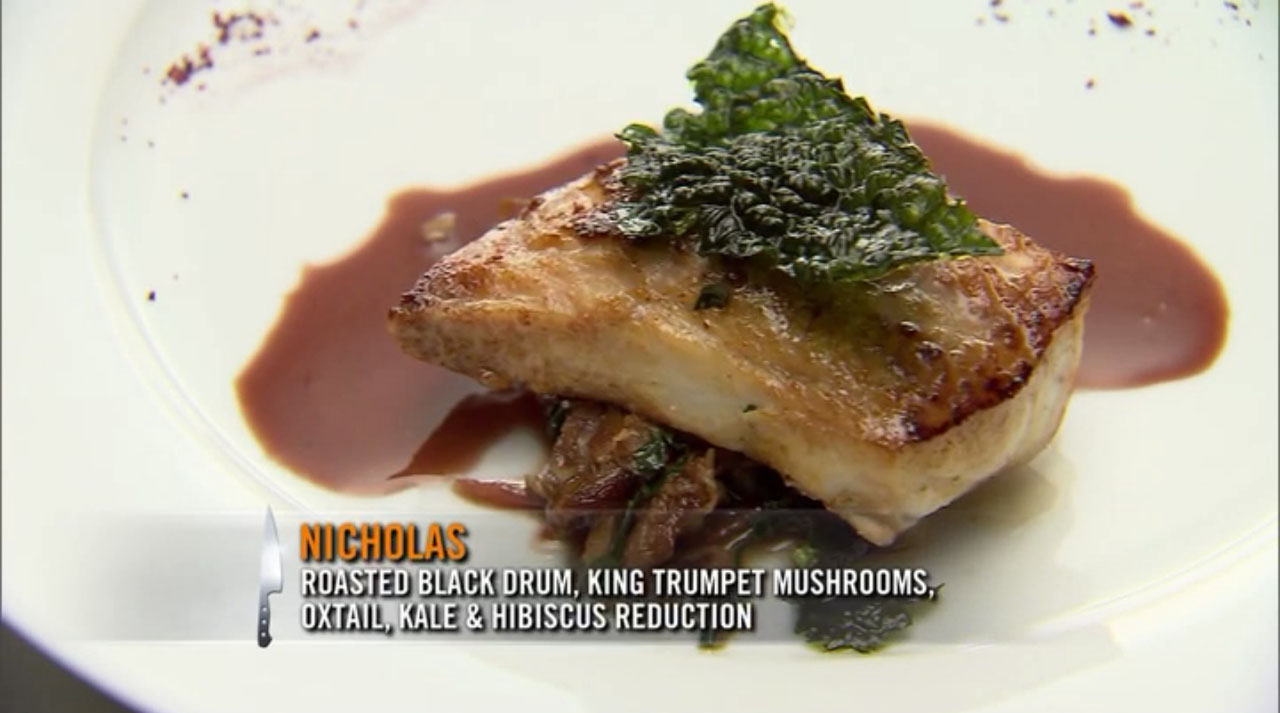 The stand-outs for the team are Stephanie's linguini with caviar and oyster cream and Nick's roasted Black Drum with oxtail, kale, and trumpet mushrooms. Travis's olive oil cake with cherry coulis also has a nice flavor, though not great texture. Overall the experience seemed like a really successful one night stand: it was fun and easy and though there were a few misses you would probably do it again. 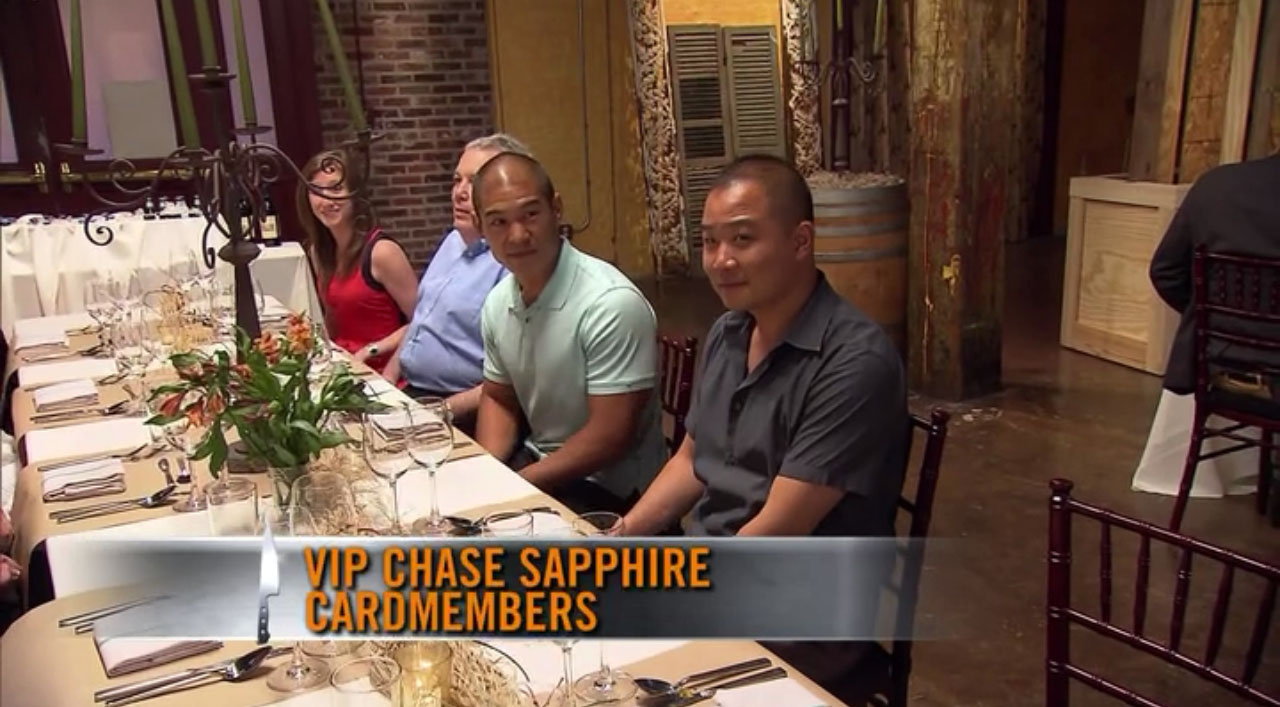 The first diners at Found, are Danny Meyer and the Chase Sapphire cardholders. Like the terms of agreement after an iTunes update, they are being completely ignored. Most of the diners don't even receive menus and Sara is nowhere to be found. When she finally comes by the table, Mr. Meyer informs her they don't have menus and she walks away while someone else is still talking to her. 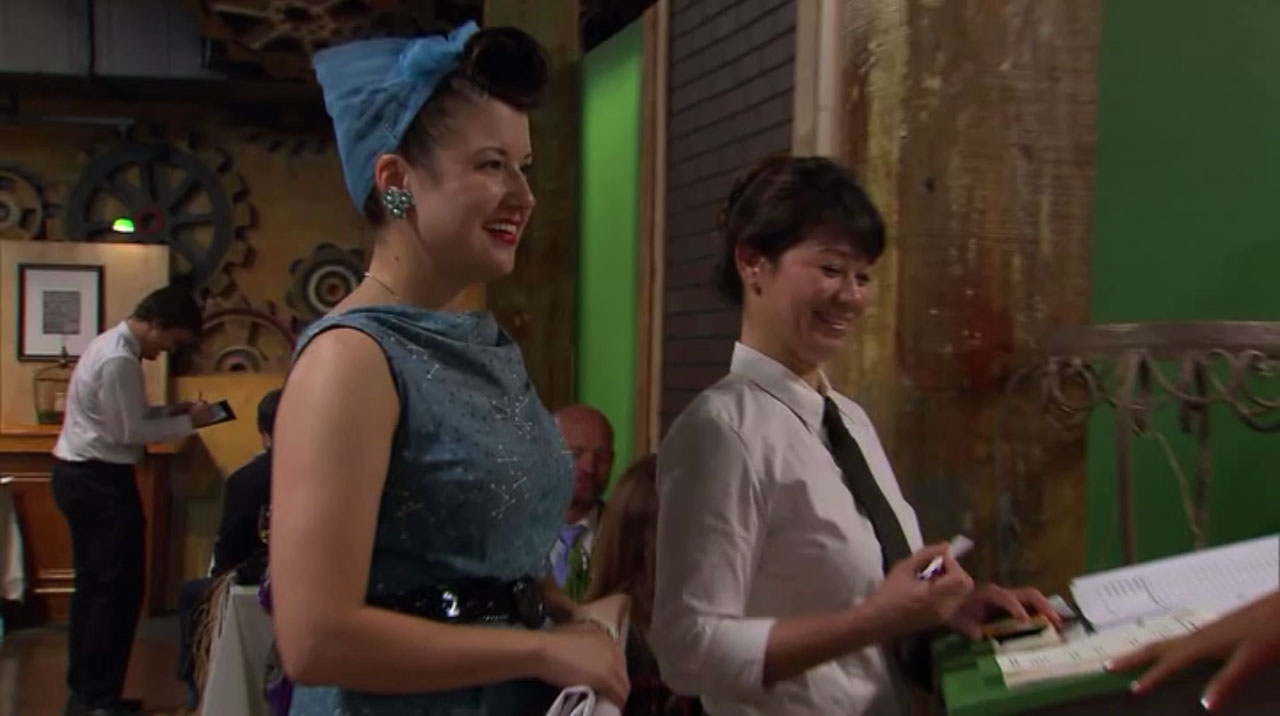 In general the service at Found is a mess: timing is off, tickets are getting lost, diners are getting the wrong dishes. By the time the judges arrive it's already a disaster. After waiting nearly a half an hour before getting served Tom cracks, "I don't know what's going on with Found but I'm about to get lost," thus fulfilling the Top Chef pun quota for the episode. Sara sees the judges and tells Justin and the rest of the chefs in the kitchen, giving them a "verbal fire" to get the dishes out instead of writing a ticket like all of the other tables. The chefs miss this and the plates don't go out until Padma complains.

After a heated debate in the kitchen, Sara brings out the first course and drops it off at the table leaving the judges to guess what it is they are eating. It is Carlos's red snapper crudo with pickled baby carrots. David criticizes the cut saying it almost seems like he just ripped up the fish by hand, which would be cooler. I disagree, David. If I found out my raw fish was prepared by someone just pulling it apart I'd be like, "This isn't Survivor, I paid for this, use a goddamn knife." The judges are unimpressed, but are even more so by Justin's rabbit agnolotti, which earns a scoff and head shake from Tom, a lethal combination. 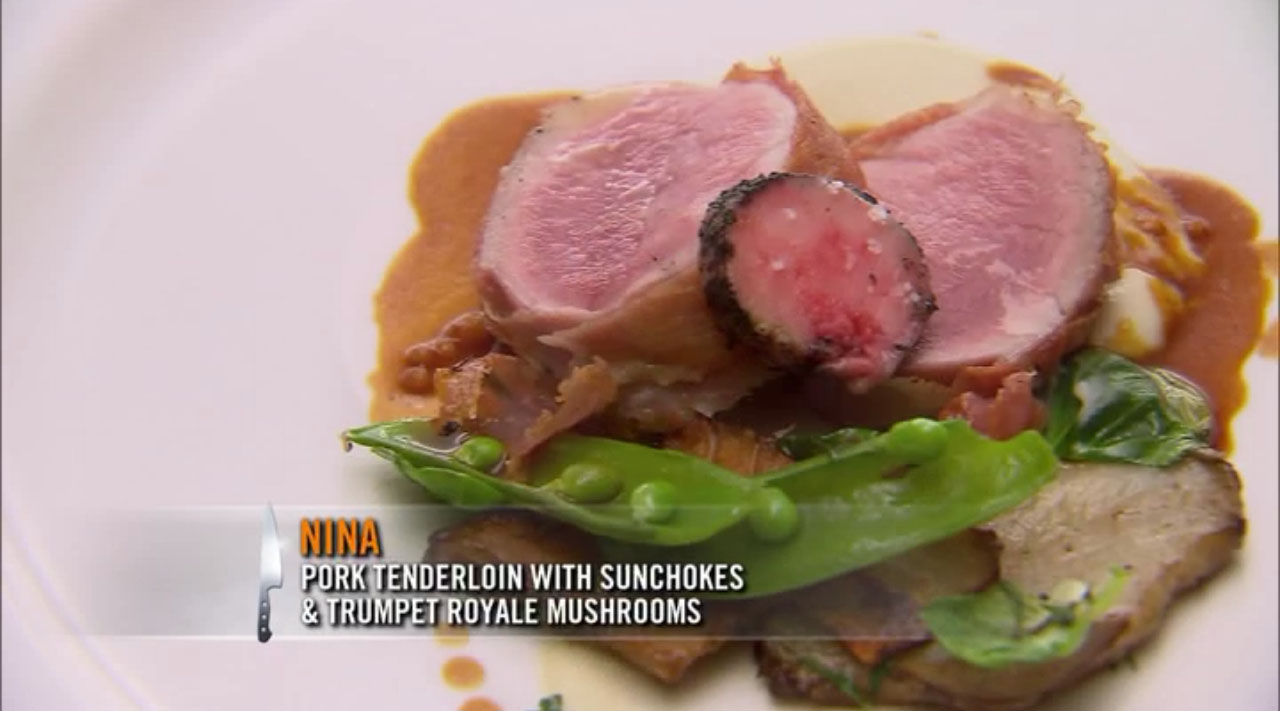 Somehow, amidst the chaos in the kitchen, Sara gets the next course out to the judges. Before she can walk away Padma asks her to describe the dishes for them in a manner so passive-aggressive I'm now convinced we're related. They love Nina's pork tenderloin with sunchokes as well as Shirley's cobia with salsa verde.

While the judges are eating, Sara returns to the kitchen to learn that her mascarpone has broken and they can't serve it with her olive oil cake. She eventually brings it out to the table and describes the dish with the same enthusiasm and detail you would use to describe a guy you're setting your friend up with. It sounds so great and exciting and then in most cases, and in the case of Sara's dessert, is wildly disappointing. Gail Simmons described it as an "oily cookie." 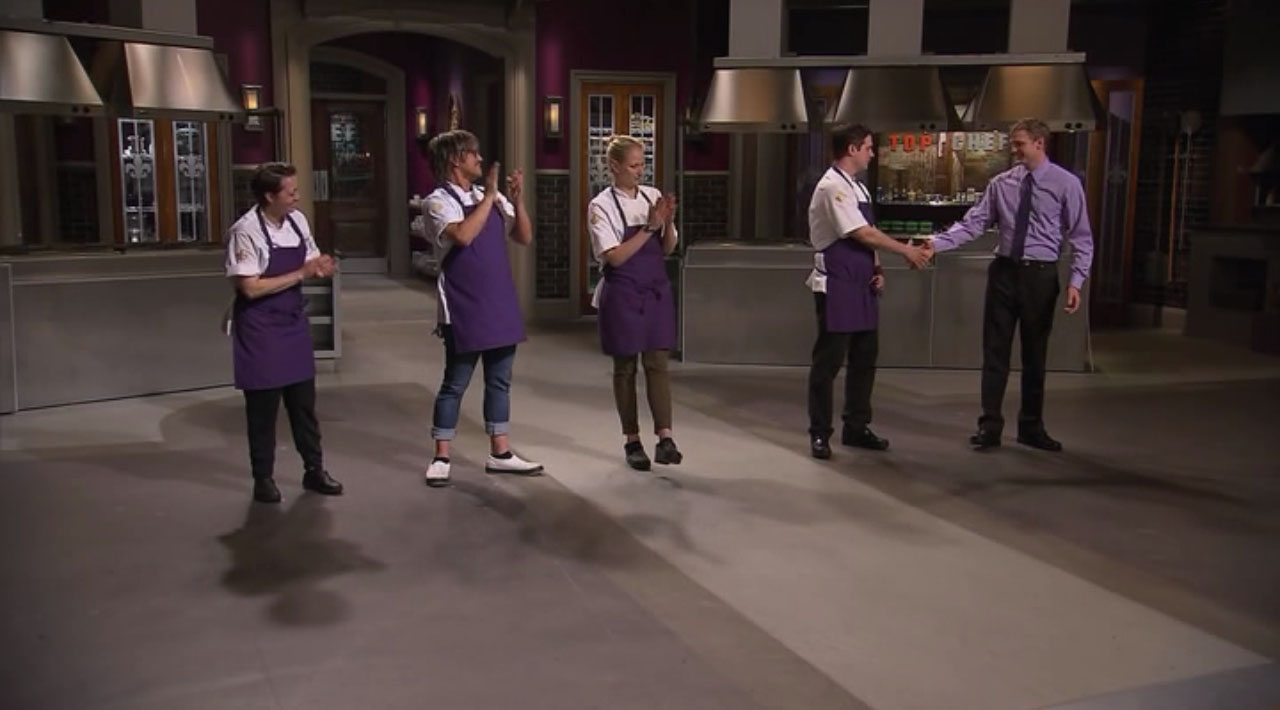 Back at Judges' Table, Padma calls in the purple team as the clear winners of the evening. Though Travis did the best job with the front of the house that they've ever seen on the show, the winner is Nick for both his excellent dish and handling his team and the kitchen well. 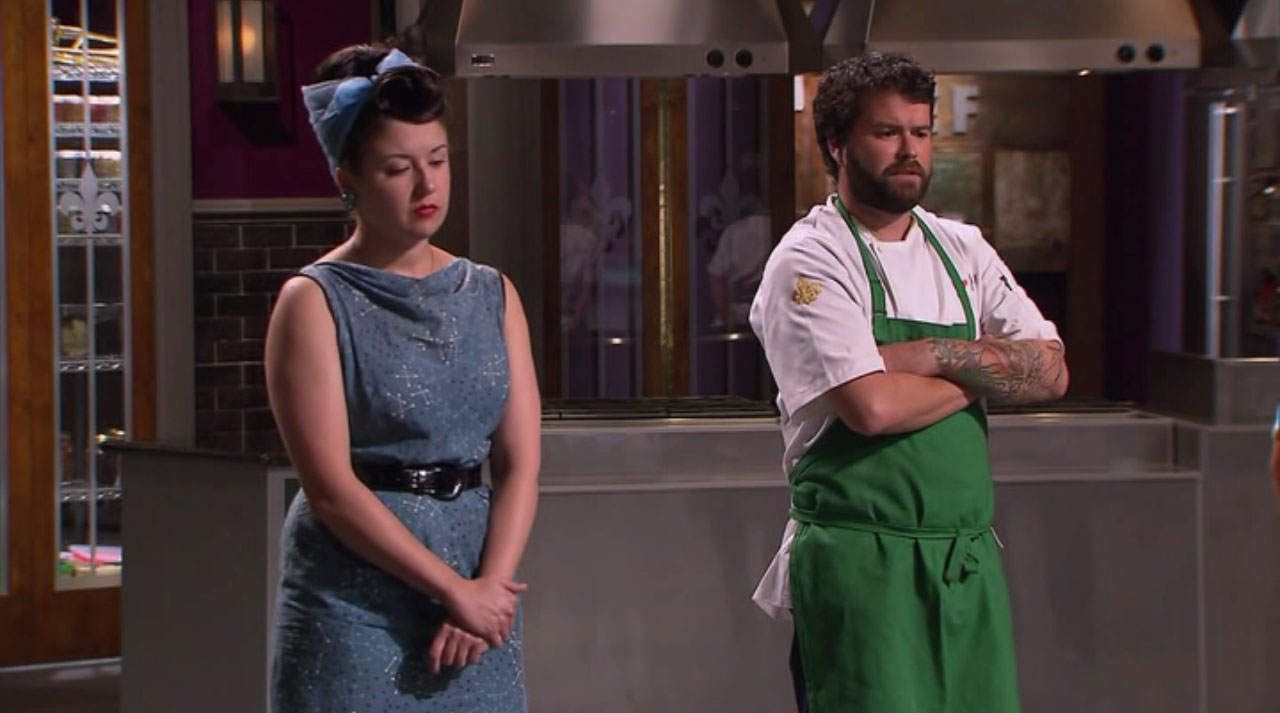 The green team is then called in as the losing team. Elimination is between Justin's bad dish and mismanaging of the kitchen and communication; and Sara's bad dish and complete inability to take care of customers. It's a tough decision, but ultimately Padma tells Sara to pack her knives (and headscarves) and go.