Ferran Adrià at Harvard: The Evolution of Culinary Theory

Share All sharing options for: Ferran Adrià at Harvard: The Evolution of Culinary Theory

Harvard University's third annual Science & Cooking public lecture series brings chefs from around the world to lecture on the intersection of science and cooking. And 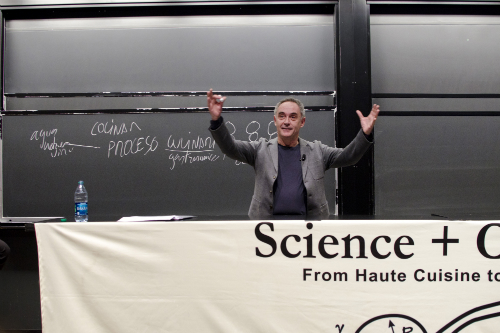 Harvard's Science & Cooking lecture series continued last night with its penultimate installment for the season: Ferran Adrià spoke on the evolution of culinary theory. Adrià has lots of questions but few answers, and that's partly what drove him the reinvent elBulli, closing the restaurant in order to open the upcoming elBulliFoundation, an interdisciplinary "creativity center," in 2015.

The majority of Adrià's lecture consisted of thought experiments posed through questions, often seemingly simple "yes or no" questions on the nature of the culinary knowledge base. Speaking through a translator, he zeroed in on individuals, triumphantly challenging their assertions and then charging ahead to the next question, digging towards a deeper theoretical level while leaving the answer unclear. Obscuring the line between "yes" and "no" seems to be Adrià's M.O., as interviews with him yield the same results. When he spoke with Eater's Joshua David Stein in 2010, for example, Stein observed: "He also has a tendency to respond by saying either, 'No, no, no' or 'Yes, yes, yes' and they both appear to mean the same thing."

When the elBulli closure was announced in 2010, mixed messages were perpetuated by the media and by Adrià himself, leading to months of confusion about the reasons for the closure, whether it would be permanent, and what would come next. "Is he broke? Is he burned out?" Adrià recounted to Eater in late 2011. "It's a matter of excess information, and also the Bulli phenomenon. There are lots of myths, and no one wants to demystify."

There are thousands of questions, starting with the broad ones: What is cooking? What is cuisine?

Adrià provided background on the closure at the start of last night's lecture, and in the end, it seems that the thesis of the talk was also the driving factor behind elBulli's transformation: culinary theory — the whole knowledge base behind the world of cooking — needs to be explored and classified so that everyone is on the same page. There are thousands of questions, starting with the broad ones: What is cooking? What is cuisine? "One of the reasons why we wanted to stop was to ask ourselves, 'Who are we?'" Adrià said last night. Wylie Dufresne drove home the same point in his lecture three weeks ago, revealing the "dirty little secret of chefs" to be that they don't know what they're doing; he created wd~50 to explore seemingly basic questions, like "What is cooking?"

"If we wanted elBulli not to die, we had to close the restaurant. We closed elBulli to not have to close elBulli," Adrià explained. The idea was to take a sabbatical to explore the essential questions, and this exploration will manifest itself as elBulliFoundation, a "creativity center" that will begin construction next year, and other massive undertakings such as BulliPedia, the "world's first culinary wiki." A few years ago, the foundation was "a crazy thing, a dream," Adrià said last night, but now it is a "reality."

So, the questions. Adrià began with the largest: What is cooking? Or, what is cuisine? Both were posed fairly interchangeably through Adrià's translator at the lecture. "When a monkey peels a banana, is he cooking? Yes or no?" Adrià asked. The audience consensus leaned towards no. "Why no? What if I peel a banana for breakfast?" He continued to push, using examples like an oyster on a plate. Does the act of shucking it mean that you're cooking? 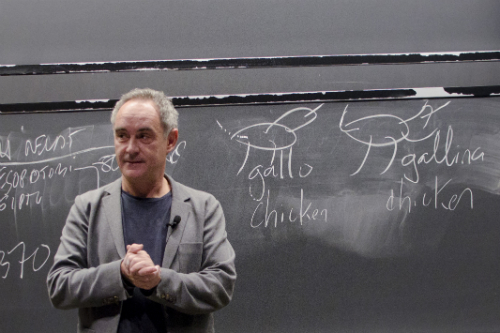 Going further: "When we are eating, are we cooking?" While it may seem that the answer is simply no if the eater is not also the cook, Adrià gave another perspective. Imagine you're served sashimi with ginger and wasabi. If you put the wasabi on the sashimi and then eat the ginger, that's one dish. Your dining companion ate some ginger, then some sashimi, and then the wasabi. That's another dish. You've created different dishes, so are you cooking? And he continued with fondue. Are you the cook or the eater?

His solution is to call it a culinary process instead of simply cuisine.

His solution is to call it a culinary process instead of simply cuisine. There are multiple players involved — the cook, the eater — and the roles can overlap. Taking it another step further, what if beverages are added to the mix? A sommelier comes by to suggest a wine pairing for the fondue. Now it's more than a culinary process; it's a gastronomic process.

Next, Adrià traced a winding timeline through culinary history, making his first stop over a million years ago with Homo habilis, our earliest ancestor in the Homo genus. We know they walked and ate, and there's evidence that they used primitive stone tools. But how do we know what they drank: water? Fruit juices? We don't know, so we have to compile what we do know and reflect on it to make inferences. The same applies to any era. Ancient Egyptian hieroglyphics show rabbits, but "I didn't know if they were eating the rabbits or doing magic tricks," said Adrià. By tracing clues throughout history, we can create a more complete picture. 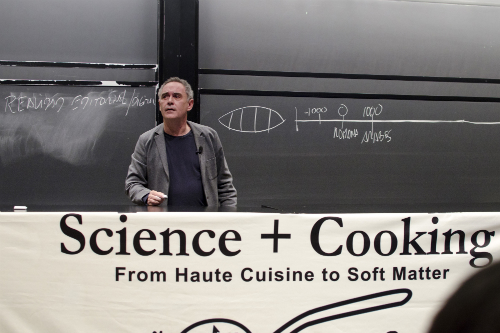 "I didn't make a single statement so far," noted Adrià as he reached the final section of his lecture. "I've been asking questions." The line of questioning continued as he drove home his point that no one is on the same page of culinary theory.

Adrià kept pushing for a definition that was not going to materialize.

An easy question, he claimed. "What is fruit?" One audience member defined it as an ovary that you eat. "So you see eggplants next to bananas at the supermarket?" Another audience member noted that the culinary and botanical definitions of fruit are different, but Adrià kept pushing for a definition that was not going to materialize.

Fine, an easier question, he continued. "What's chicken?" Audience: "A bird." Adrià: "But an ostrich is a bird, too." He scrawled a diagram on the board, trying to draw out a conclusion about the difference between male and female chickens, young and old, but the point was obscured partly due to the language barrier regarding the multiple words for chickens of different ages and genders. "If it's any consolation, the best cooks in the world didn't guess what is fruit and what is chicken," he said.

The key point, he explained, is that if we can't agree on definitions for fruit, for chicken, how can we improve? In the culinary world, "we lack classifications altogether," and it's "no laughing matter" that an industry has no clear consensus on thousands of questions like this. There's not enough time for cooks to reflect, read, and learn from history, he explained, and that's where the problems come from. We need to "reset" our mind to find context and clarity. While it's impossible to know everything about everything — there are 3,000 varieties of tomatoes, he exclaimed — we can help technology help us. "So now, humans, we really have to help machines: reflecting, classifying, synthesizing information."

The Harvard Science & Cooking lecture series ends for the season next Monday, December 9th, with Jack Bishop and Dan Souza of Cook's Illustrated lecturing on "The Accidental Chemist." Seating for the free event is first come, first served, and more details can be found on the Harvard website.