The 19 Most Scathing Restaurant Reviews of 2013

Share All sharing options for: The 19 Most Scathing Restaurant Reviews of 2013

In 2013, critics across the world sharpened their knives: There was Giles Coren's almost-hyperbolic takedown of Balthazar London, Alan Richman's slaying of Corvo Bianco in New York, and a few zero-star reviews from NYC's Steve Cuozzo, Pete Wells, and Ryan Sutton. Of course, the king of the takedown, Jay Rayner, makes a few appearances, too, calling a few particularly offensive dishes "grotesque" and "tortuous." Go on, give them a read (and check out 2012's scathing reviews while you're at it): 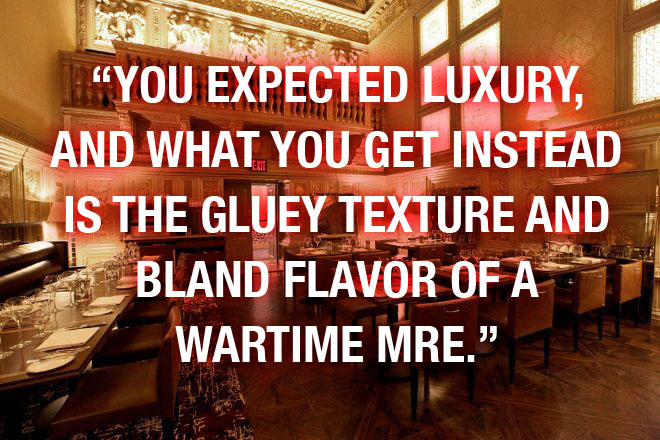 Bloomberg's Ryan Sutton slammed the opulent New York City restaurant Villard Michel Richard with a headline that cuts right to the chase: "Here Are 18 Things to Know about NYC's Lousy $700 French Dinner." After pointing out the restaurant serves "what might be New York's most expensive four course menu," Sutton tears into a "lousy" fettuccine, a lamb that's as "exciting as hotel buffet fare" and fake beluga caviar. 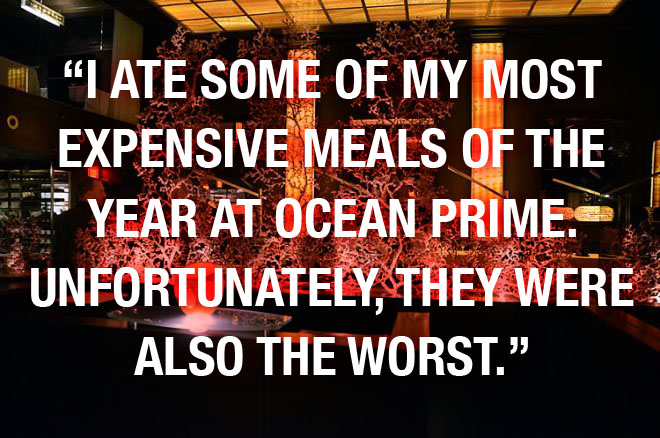 A new Philadelphia outpost of steakhouse chain Ocean Prime needed a reported $5 million to revamp the "epically opulent" space, but Inquirer critic Craig LaBan dropped a zero-star pan that chronicled a dinner gone very wrong. From a late reservation to a table mix-up to the first course of "thick and bland" lobster bisque, nothing went right at Ocean Prime. LaBan even took issue with the servers' hygiene, "one of them reeking of cigarette breath, the other a disturbingly pungent body odor." 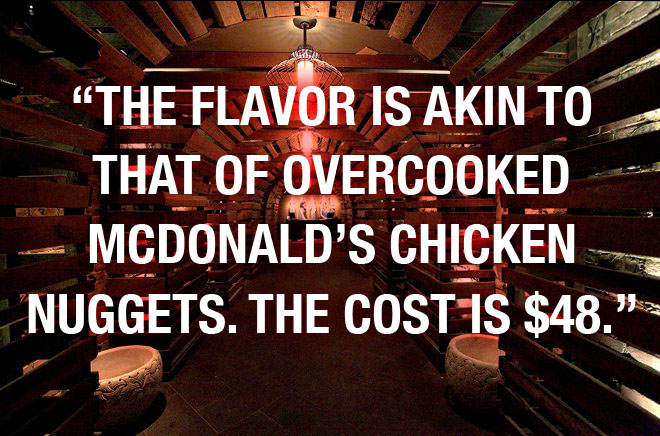 Sutton had a rough month of December: The week before his takedown of Villard, he also slammed the New York City outpost of Tao, bestowing just a half-star. Admittedly, "many of the dishes are serviceable enough, and some are quite good," but not at these prices, and not with so many misfires. "Wagyu beef, with 'sophisticated dips and sauces,' has scant more tenderness or flavor than a $10 steak from Pathmark," Sutton writes. "Here, you pay $88 for the privilege."

One of 2013's most anticipated openings is a major dud, at least according to the Washington Post's Tom Sietsema, who gave celebrated chef Spike Gjerde's casual diner just a half-star (out of four). Despite Shoo-Fly's pedigree, the housemade "Snake Oil" condiment "turns out to be among the few edible charms at Shoo-Fly Diner," which ultimately is "one of the biggest dining bafflements of the year." 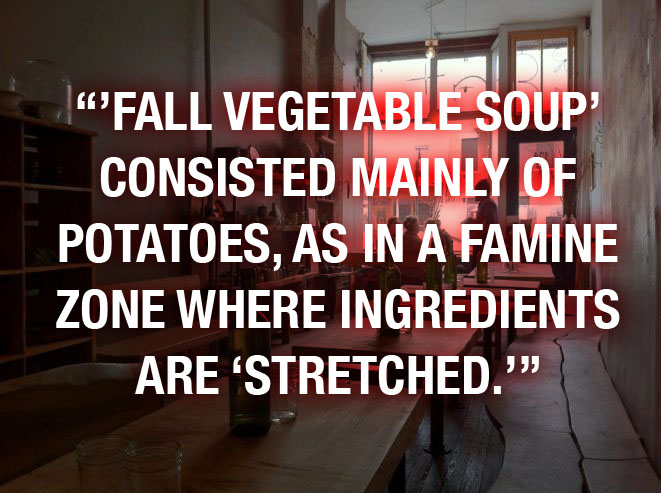 The silent-hipster Brooklyn restaurant Eat (at which all diners must eat in complete silence) earned a zero-star rating from the New York Post's Steve Cuozzo. "A better idea for the 20-seat, Meserole Avenue joint would be 'no tasting,' based on the amateurish dishes I had the other night." 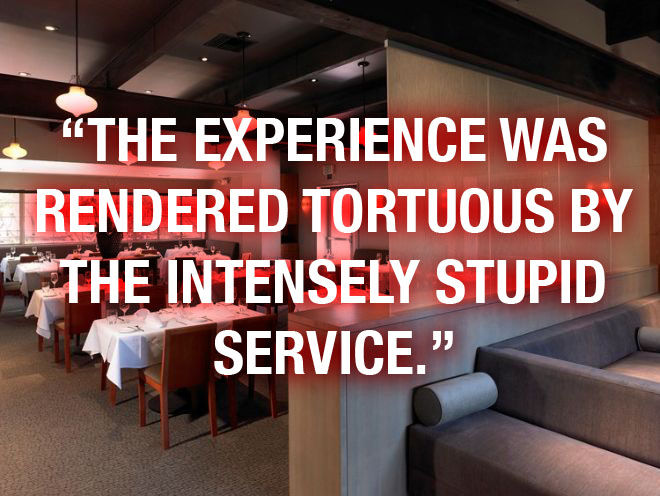 In an otherwise completely unrelated review of an Oxfordshire restaurant, Jay Rayner of The Observer took a moment to slam David Kinch's celebrated California restaurant Manresa. Specifically, its "tortuous" service. The comment caused quite a stir stateside, becoming 2013's most influential one-paragraph-non-review. 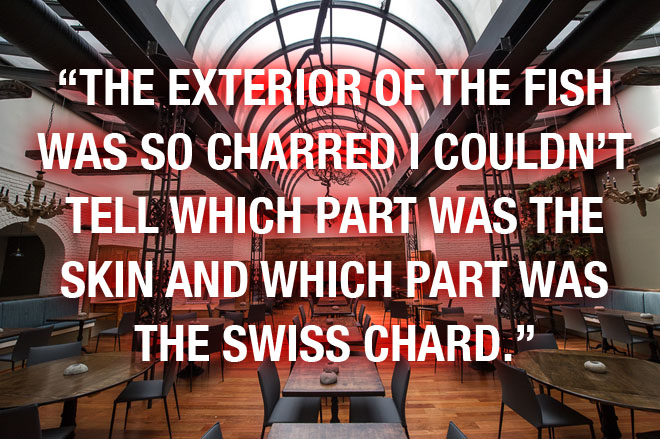 Chef Elizabeth Falkner's new NYC Italian restaurant got a big thumbs down (and zero stars) from GQ's Alan Richman, whose unpleasant experience is embodied by a pushy waitress, "a living slideshow who perfectly illustrated everything that's wrong with Corvo Bianco." Fritto misto was all vegetables and "pretty ordinary," time spent with a truffled pasta "never found a truffle," meatballs were deemed "Positano Bar Mitzvah food." It wasn't the only slam for the restaurant: Steve Cuozzo also called the spot a "huge disappointment." 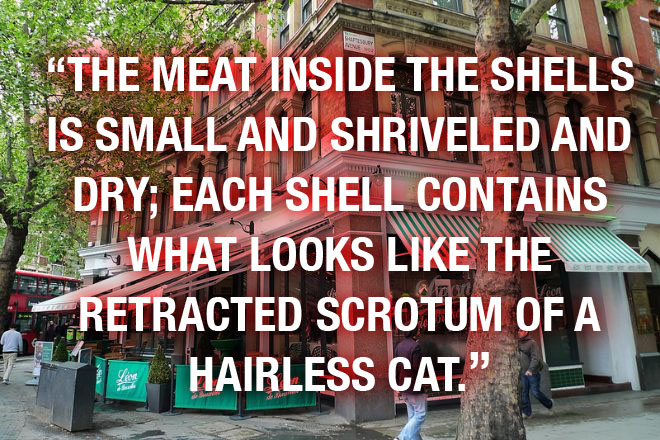 Man, Rayner was on a tear in late summer/early fall: Next up, his take on Leon de Bruxelles, a Brussels-based fish-and-chips chain that made its move to London. After noting the space was tumbleweed-empty, Rayner reports "the food, when it deigns to appear, has OKs and kill-me-now lows." The signature mussels draw a comparison to feline testicles (see above), and ultimately, the restaurant is just "terribly, terribly sad." 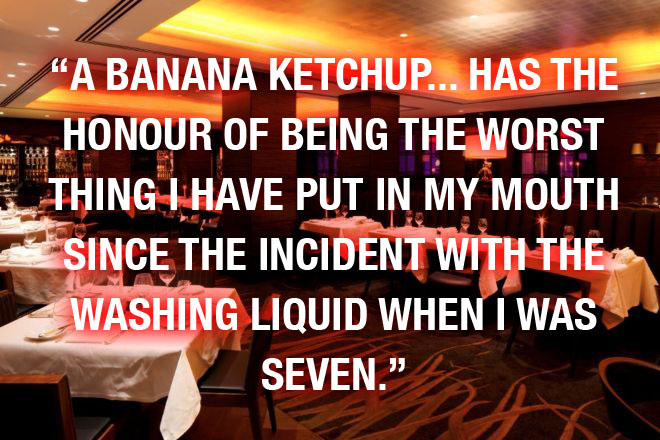 Jay Rayner came out, guns blazing, against the Blue Boar Smokehouse, which he calls a "grotesque marketing conceit" that "takes the 'dirty food' trend to a new low." Barbecue sauce is "sweet as a six-year-old's confection stash," a dish described a "Southern fried chicken" hilariously "must never be granted freedom from within those quotation marks."

Reviewed by Virginia B. Wood, August 2013

In an experience so terrible she decided to publish the review without actually naming the restaurant, Austin Chronicle's Virginia B. Wood presents a blind-item takedown of a local restaurant, calling it "one of the most excruciating experiences of my career." Among the offenses/tips: a plate that looked like "lukewarm microwave waffles," a bowl of soup containing "an entire meal's worth of salt," and lack of "basic service." Eater commenters speculated the review referred to the Austin Ale House. 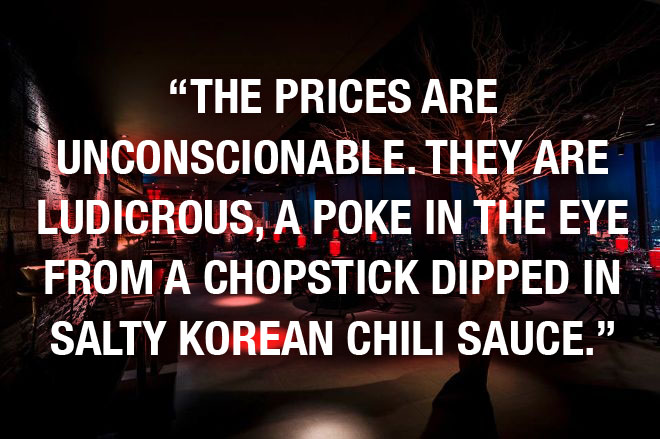 The Observer's Jay Rayner admits he actually liked the food at Hutong, the London outpost of the famed Hong Kong restaurant, but the experience proves appalling due to its "wallet-lightening." Writes Rayner, "the restaurant is only affordable if you wear knickers lined in baby panda fur on a daily basis, rather than just for pulling." And the one miss was a big one: a peppercorn-filled cocktail "looked like norovirus in a glass and tasted like it was made by someone who hates me." 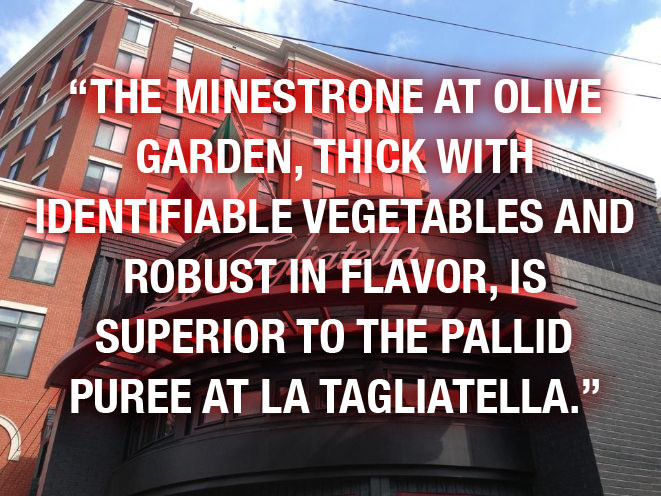 The Washington Post's Tom Sietsema comes right out of the gate with his take on Spanish-based restaurant chain La Tagliatella, writing in the first sentence that "La Tagliatella in Arlington makes a strong case for hazard pay for restaurant critics." Siestsema suffers through courses like a steak with a "blinding sheen" and a Caesar salad with dressing "that goes down like melted baklava." Of the restaurant group's plan to expand across the United States: "Someone needs to put a stop to this threat to our nation." 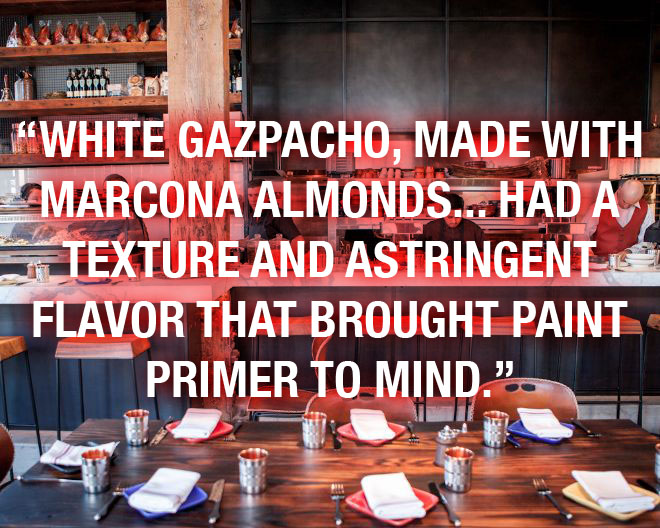 SF Weekly's Anna Roth stresses: "I've always liked Michael Chiarello." But the celebrity chef's Spanish-inflected restaurant Coqueta "revealed itself to be a lot of show without much substance." Octopus is "topped with so much Spanish paprika it tasted gritty and acrid," while meatballs are deemed "inedible." There are a few worthwhile dishes, but ultimately, Coqueta offered little more than "flash and style." 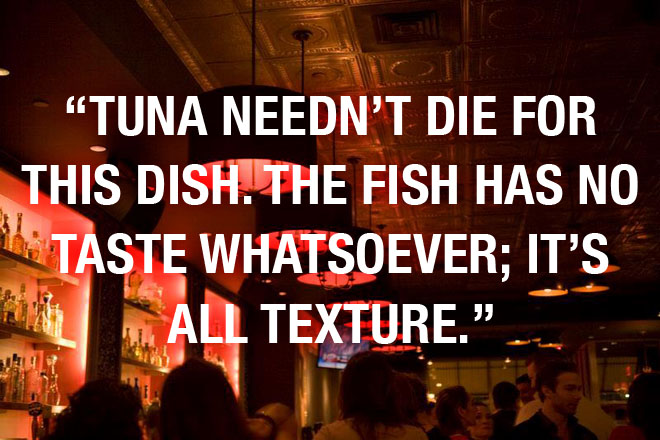 The Boston Globe's Devra First visited restaurateur Michael Schlow's newest project Mexican spot Barrio Cantina and discovers a menu that "feels like a minimally overseen afterthought, a can't-lose concept plopped into a can-lose space." A dish of sizzling fajitas provides the apt metaphor for the overall experience: "When, at Barrio Cantina, the fajitas arrive silent, room temperature, no tantalizing smell of cooking onions wafting from the dish, we fall silent, too. The bad news has announced itself." 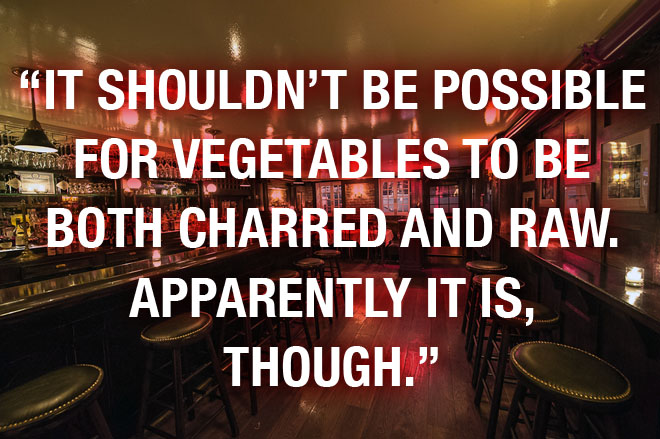 The New York Times' Pete Wells dropped a massive goose egg (zero stars) upon Graydon Carter's revamped Beatrice Inn, where dishes were either problematic or "unremarkable." Gnudi "were bursting with the flavor of warm New York City tap water" and a New York strip "had a chewy band of fat at its edge, as if the meat were wearing a protective latex sheath." 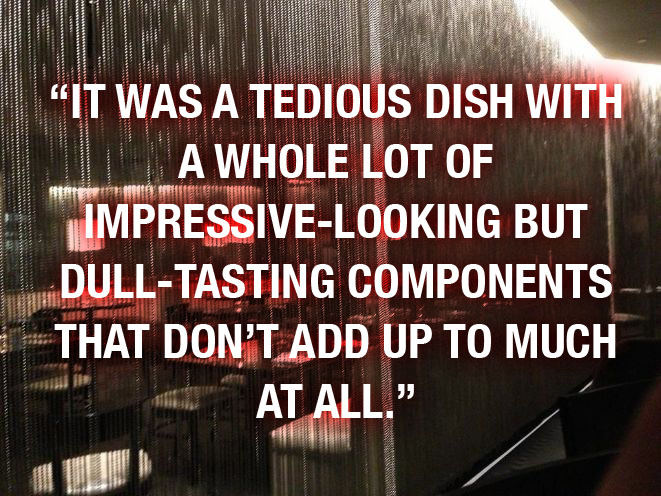 Dallas chef Najat Kaanache made a cameo in critic Leslie Brenner's takedown of her restaurant PS, in the form of an in-restaurant argument over whether a menu ingredient was indeed foie gras, as described. "Everyone was looking at our table — she was really making a scene. I couldn't help but wonder whether her guests are often treated to such abuse, or is it reserved for one recognized as a critic?" Foie or not, Brenner doesn't like much of the modernist menu, from the spherical olive that "clobbers the palate and clashes badly" to the "tedious" avocado salad.

In March, The Times' critic Giles Coren caused major controversy by flat-out slamming Keith McNally's London outpost of Balthazar, calling it "the best restaurant in London, and the worst food in Europe." McNally himself responded to the review, saying "it was written so clearly for controversy's sake it discredited every word he wrote afterwards." 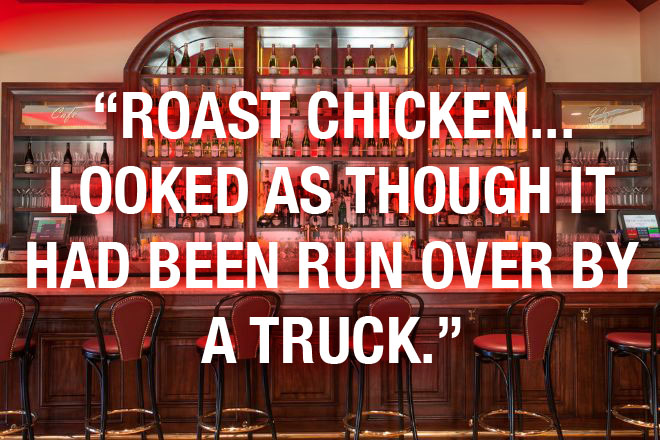 Dallas Morning News critic Leslie Brenner called the New York City transplant Cafe des Artistes a "razzle-dazzle disappointment," awarding it just one star. Brenner writes, "there's something that feels very cynical about the whole operation," from its expensive price tags to salad that "should have been saved for someone's pet rabbit."

One of the most anticipated openings of 2012, Iron Chef Masaharu Morimoto long-stewing Tribeca Canvas crashed and burned right out of the gate, earning bad reviews from just about everyone. The New York Post's Steve Cuozzo, in particular, found a lot to hate, writing "the menu pays homage to Morimoto's chutzpah in thinking he can sell anything to downtowners with grown-up dough and 16-year-olds' tastes." Among the worst offenders: a "gooey and indistinct" macaroni and cheese, and a chicken pot pie whose main ingredient appeared to be "air." The restaurant has since closed and reopened as Bisutoro.