2013: The Year in Crazy Restaurant Receipts

Share All sharing options for: 2013: The Year in Crazy Restaurant Receipts

If 2013 taught us anything about restaurant receipts, it's that they can be used for good and for evil. While there were plenty of do-gooding big tippers this year like TipsForJesus, 2013 will also be remembered for being the year of the homophobic receipt message (even if some of the receipts may have been doctored). Religious-leaning receipt ranting was something of a trend this year, which also saw a pastor come under scrutiny for her now infamous decision to stiff a server at Applebee's. As in years past, 2013 also had its share of big-spending (and in some cases big-tipping) athletes and politicians. Here now, without further ado, the good, the bad, and the very ugly receipts of 2013, in reverse chronological order:

Mysterious tippers spent 2013 leaving thousands of dollars in tips for servers, bartenders, and golf caddies across the country with little clue to his/her/their identity other than the handle @TipsForJesus scrawled in pen on the receipts. TipsForJesus gets around, with tips surfacing in NYC, Mexico, Phoenix, and Connecticut (just to name a few), and takes credit for a tipping spree in Utah as well. Former Pay Pal VP Jack Selby has been rumored to be the generous tipper. In a Q&A with Eater, the anonymous group said: "The tipsforjesus-sized tips have been going on for around ten years." The group also plans to get others involved with a nationwide Christmas Eve tipping spree.

Anti-Gay Note Left to Former Marine Is a Fake

In November a New Jersey waitress and former Marine claimed that a family stiffed her on a $93.55 bill, leaving a self-righteous homophobic note instead of a tip. The note, scrawled by hand on the receipt, read: "I'm sorry but I cannot tip because I do not agree with your lifestyle & the way you live your life." A few weeks later the couple came forward with a time-stamped receipt and credit card statements they claimed prove they did leave a tip and that they did not leave any such note. It turns out server Dayna Morales lied about some other things too: the exact nature of her military service and the fact that she wasn't really donating money she received from well-wishers. Not surprisingly, Morales parted ways with the restaurant, who called the drama an "unfortunate incident."

Back in October a couple at an Overland Park, Kansas location of Carrabba's Italian Grill actually wrote a homophobic note on their receipt instead of a tip. Here's the gist: Despite receiving "excellent" service from their waiter, they could not "in good conscience" tip him because his "homosexual lifestyle is an affront to God." The town rallied behind the server, going out of their way to dine at Carrabba's. Was this the inspiration for the New Jersey receipt hoax above?

After a particularly successful Sunday game in October with six tackles, two and half sacks, and a win over Houston, Kansas City Chiefs linebacker Tamba Hali spread the love by tipping a local Fogo de Chão server $1,000. Sure this isn't a ton of money compared to Hali's $57.5M contract, but the servers working that night were certainly pleased with the extra money.

After bringing his kids to a normally 21-and-up St. Louis restaurant called Friendly's Sports Bar & Grill for Father's Day, one man was surprised to find that on his receipt his fried chicken and soda dinner came with a side of "fuckin needy kids." Apparently the waitress had typed in the additional instructions for kitchen staff as a joke, but forgot to take the message of the receipt. Oops.

After a long legislative session, the humble politicians of Texas' House Calendars Committee just want to sit down to a nice steak and a glass of wine. According to a $22,241.03 dinner receipt from downtown Austin steakhouse III Forks, they don't mind having a ton of whiskey and tequila either. No taxpayer money was used to cover the epic meal, which required over 50 credit cards for payment. Apparently the "self-congratulatory dinner" is a time-honored tradition of the Texas Legislature committees. 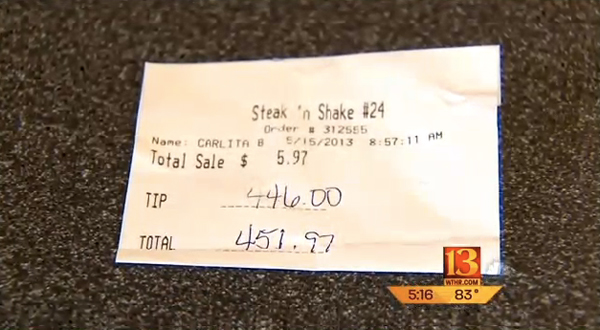 Back in May, a Steak 'n Shake server in Indianapolis was left a 7,000 percent tip from one of her regulars. The generous tipper who goes by Miss Jo left $446 tip on a check for $5.97, and would not hear it when her server tried to refuse the the giant tip.

In early February, New England Patriots tight end Rob Gronkowski made waves after partying shirtless at the whale-worthy XS Nightclub in Las Vegas, where he and his crew racked up a $9,615 bar tab. There were three bottles of Grey Goose at $525 a pop, various pricey champagnes, Ciroc, Red Bell, and 14 bottles of Fiji water at $11 each. The priciest booze was a magnum bottle of Perrier-Jouet brut at $1,595, while the cheapest line on the whole receipt is the $32 dropped on Crown Royal. An included gratuity of $1,400 and another $1,211 in taxes brought his bill to about 10 grand all in.

Kids can sure be annoying, so in February one Poulsbo, Washington restaurant offered a family a discount for "Well Behaved Kids." Apparently the discount on the receipt also came with a complimentary bowl of ice cream, even further motivation for parents to keep their kids on their best behavior at restaurants.

One of the year's biggest receipt scandals happened in early January, when a pastor decided not to tip her Applebee's server because "I give God 10%. Why do you get 18?" The pastor came forward calling her note a "lapse" in her "character and judgment," and Applebee's responded to the incident by firing the server who posted the receipt on the Internet in the first place and issuing many statements explaining their decision to do so.

In January, longtime DC restaurant Old Ebbitt Grill became a guinea pig for a Micros-based system of adding Associated Press headlines to their receipts. Servers hand the "Latest News" headline slip with 10-12 of the biggest AP stories of the moment to customers along with their check or, upon request, at any point in the meal. Management explains there's no downside to having the headlines besides the extra paper usage, and notes that DC is a "news-hungry" city.

Back in January a photograph of a message supposedly left with a receipt made the rounds because it was said to be left by a California diner who blamed Obama and paying taxes for why they didn't tip their server. The card insists that because Obama asks the customer to pay "MY FAIR SHARE IN TAXES" the diner has decided to "cut back on discretionary spending." Apparently custom cards and dining out still fit the budget, but tipping doesn't.