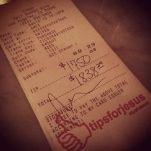 The generous league of shadowy figures known as TipsForJesus has struck again in Los Angeles: The mystery tippers left a $1,750 tip on an $88 tab at the Hollywood pub the Pikey. According Eater LA, "the TipsForJesus guys were low key, and when it came time to pay they told [waiter Steve] Lucarelli that the service, food and drink was phenomenal, and not to freak out, that they would be leaving a large tip and that it was for real." [Eater LA; previously] [Photo: Instagram]