A Field Report From Meadowood's 12 Days of Christmas

Share All sharing options for: A Field Report From Meadowood's 12 Days of Christmas

Editor markup for Meadowood 12 Days of Christmas. This is only visible in the story editor.

For the sixth December in a row Meadowood chef Christopher Kostow invited 12 great chefs from around the globe to participate in his 12 Days of Christmas charity dinner series. Each night — the dinners began on the 6th and continue through the 21st — a visiting chef and Kostow collaborate on a multi-course menu, paired with wine from a local vineyard. 20 percent of the proceeds and $2,000 in the name of each chef go to local foundations Napa Emergency Women's Services and the Holly Cranston Foundation.

Kostow asked noted photographer Bonjwing Lee to document the entirety of the series and invited a couple of Eater operatives to nights three and four, the dinners of visiting chefs Carlo Mirarchi of Roberta's and Blanca in Brooklyn and Tim Cushman of O Ya in Boston, respectively. Ahead are some photos (most courtesy of Lee) and hangover observations.

[Photos by Bonjwing Lee unless noted]

1) Servers asked the following questions of chefs Mirarchi and Kostow at Tuesday's pre-service meeting:
"Are we brothing then grating?"
"Is there a bread component?"
"What plate is this going in?"
"Lime juice or segments?"
"The truffles on the cod are black?"
"What's the braising liquid?"
"Did you say your dad makes the cured meat?"
"What's the shape of the pasta?"
"Where's the rabbit from?"
"What's vincotto?"
"What's puntarelle?"
"What color is it?"

2) Mirarchi's dinner was served alongside wines from Scribe Winery, a vineyard in Sonoma on the site of a former turkey farm (hence the feathers on the company's logo). It is run by two Very Handsome brothers named Andrew and Adam Mariani. The wines are delicious, their story's great, they have a soft spot for unusual varietals like Sylvaner, and those faces play really well in the media (and Dockers campaigns). 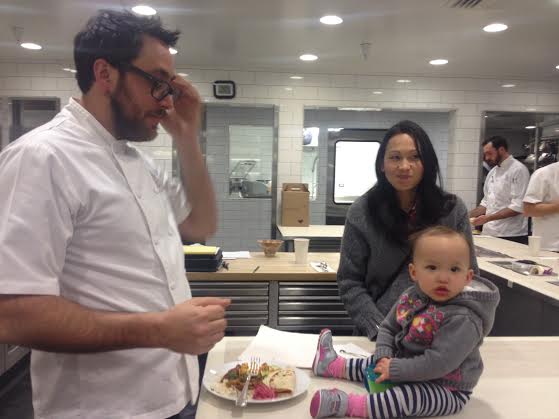 6) The star of the pre-service time: 10 month-old Daisy Kostow.

7) Something that was really on display here that became evident after night two was chef Kostow's versatility. The wine pairings weren't spot on perfect for every course both nights — you try pairing a big Napa red with Tim Cushman's delicate Japanese fare — but Kostow's ability to match the tone, style, and sensibility of his co-chef was pretty remarkable. At first it was hard to see how Bonjwing Lee could stay for all 12 nights without tiring of the experience, but it really is like eating at a whole new restaurant (with the same plateware) for each iteration.

8) Great, unexpected dining duo: Carlo Mirarchi and Nancy Cushman (sake expert and wife of Tim). Ask them for SF burrito recs or about sake lees and get ready for an ear-full.

9) OliveOilGate: In which Team Eater managed to piss off chef Kostow by delivering a thank you gift of local olive oil to his assistant and Young Guns semi-finalist Heidi Brown. Chef should be checking his mailbox for a case of Bertolli soon.

A huge thank you to chef Christopher Kostow, Heidi Brown, and the entire Meadowood team for the accommodations and food. A big shout out to Scribe Winery and Checkerboard Vineyards for providing the wines. And check out Lee's full recaps of the nights here and here.

The Restaurant At Meadowood