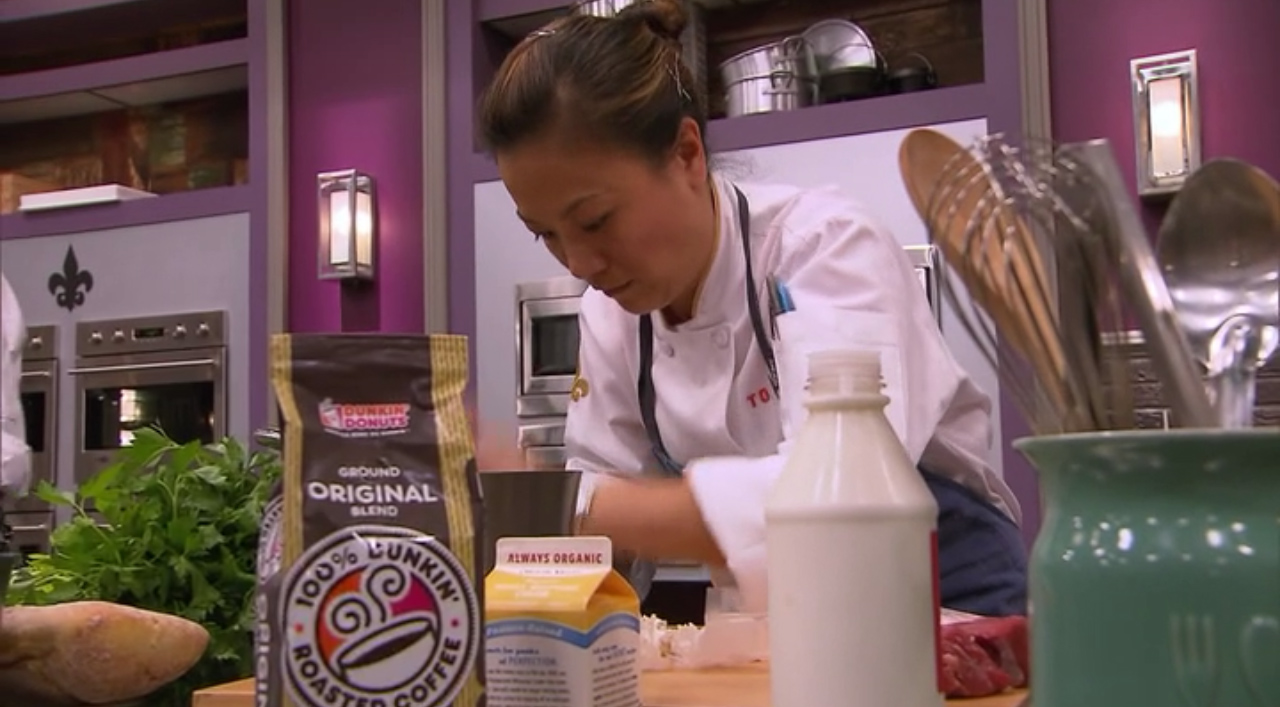 I'm going to be honest with everyone: I have not left my apartment since Restaurant Wars ended with Sara Johannes and her Rosie the Riveter costume getting sent home. Why? Because it's too cold to do anything except for lie down on the couch in yoga pants where the only posture I plan on practicing is "balancing bowl of popcorn on chest." I am nailing it.

There's no real need to keep talking about the weather. I mean, who are you guys, my ex-boyfriend who I ran into on the street and had to smile through small-talk with just so I wouldn't burst into a deafening stream of obscenities? We have more important things to discuss, like the heavily Dunkin' Donuts sponsored first twenty minutes of the show. 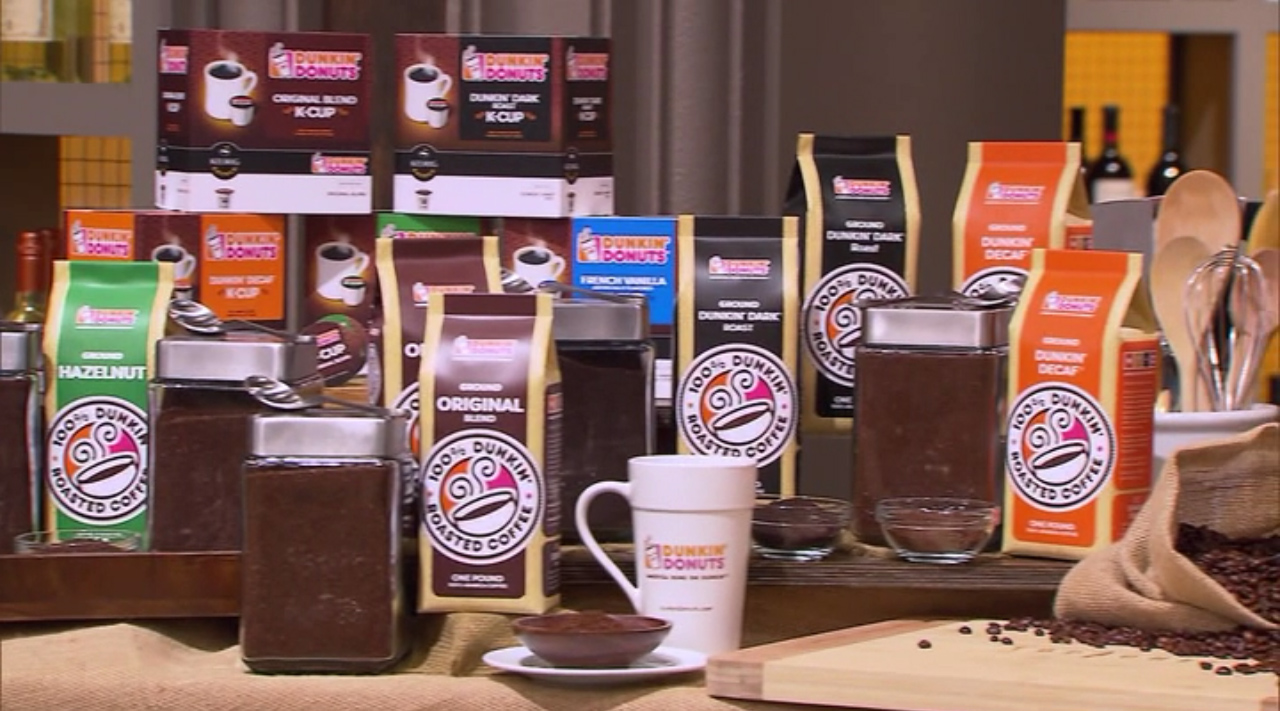 Padma Lakshmi and Hubert Keller greet the chefs in the kitchen for the Quickfire Challenge. Behind them stands a table covered in Dunkin' Donuts coffee products as Padma prattles on about the company and tosses out one of its several slogans that for some reason use the word "run" even though all they sell is 500 calorie smoothies and meal deals of two donuts and a bucket of sugary milk with a straw. I thought, "Wow, so does this Dunkin' Donuts ad have a Top Chef challenge in it?" Then I realized, "Oh, no, this episode of Top Chef is so heavily sponsored by Dunkin' Donuts that it's indistinguishable from a commercial."

The challenge is for each chef to make a dish featuring coffee. One winner will receive not only immunity from elimination, but also $10,000 furnished by — you guessed it — Dunkin' Donuts. Hearing that the winner gets ten grand, Shirley Chung says she plans to buy an air conditioner if she wins. Ten thousand dollars and you want an A/C? What is she going to do with the other $9,850? Or is she planning to blow it all on one really great air conditioner? Honestly, for $10,000, that thing better marry me and stay at home with our kids. 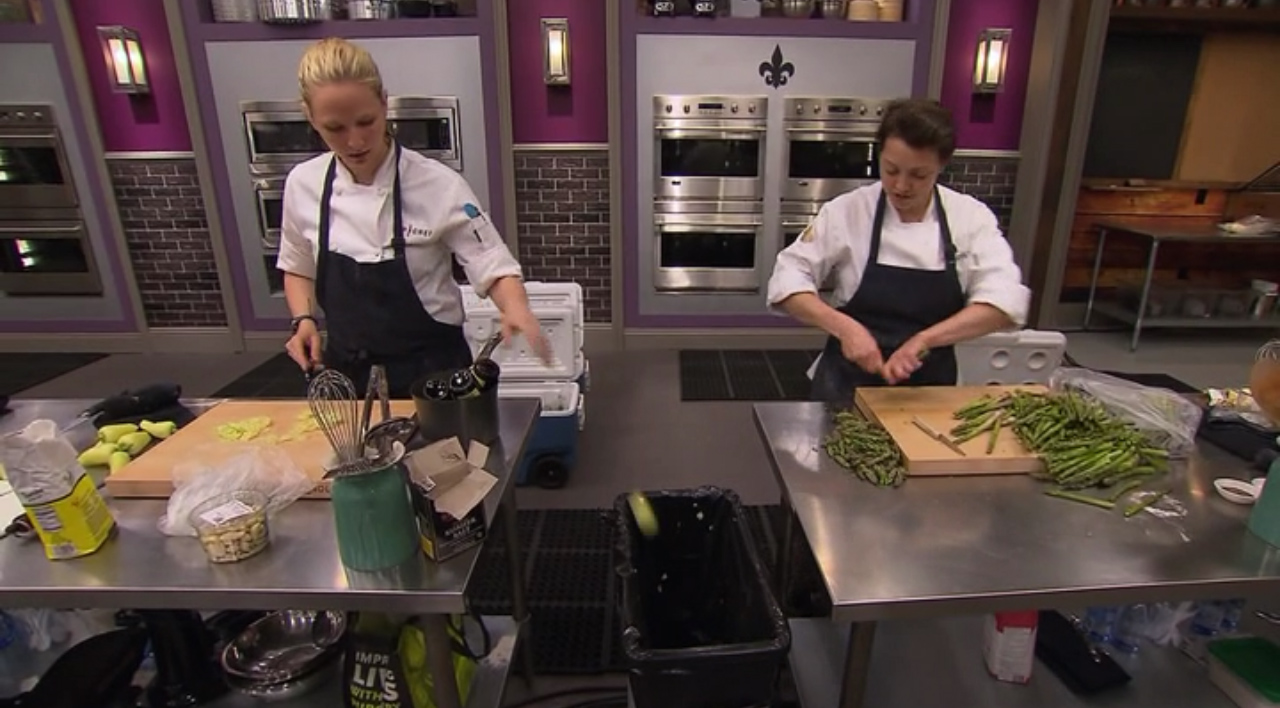 Bryan Huskey, fresh off two Quickfire wins, decides to do a coffee risotto in the thirty minute challenge, which is a bold move since according to Tom Colicchio, "Risotto and top chef = fail." Bryan says, "You gotta put your balls out there and let them swing," though I'm sure that's something that the Department of Health frowns on. Carrie Mashaney chooses to do a coffee crepe, though as the challenge is winding down she realizes she doesn't have enough time to actually make the crepes. She changes gears and ends up making a coffee custard instead. It pays off because Hubert really enjoys it. He also enjoys Shirley's coffee crusted tenderloin with garlic cream and Stephanie Cmar's coffee crepe with sweet potato and goat cheese sauce. 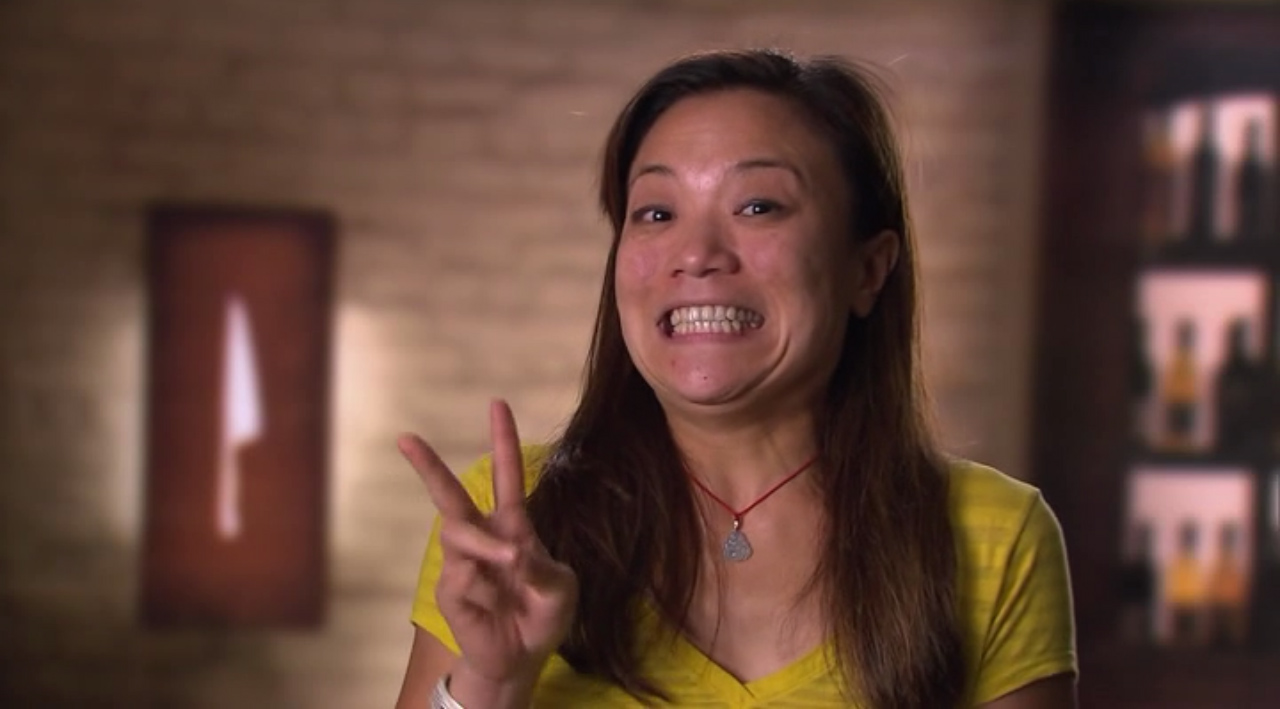 We take a break before learning the winner because Bravo had to cram two Dunkin' Donuts ads in the first commercial break, as if we weren't hit over the head enough with the product placement during the challenge. The winner of the Quickfire is Shirley. Now she can buy that air conditioner that blows gusts of diamonds into her home or whatever it is a $10,000 air conditioner does. 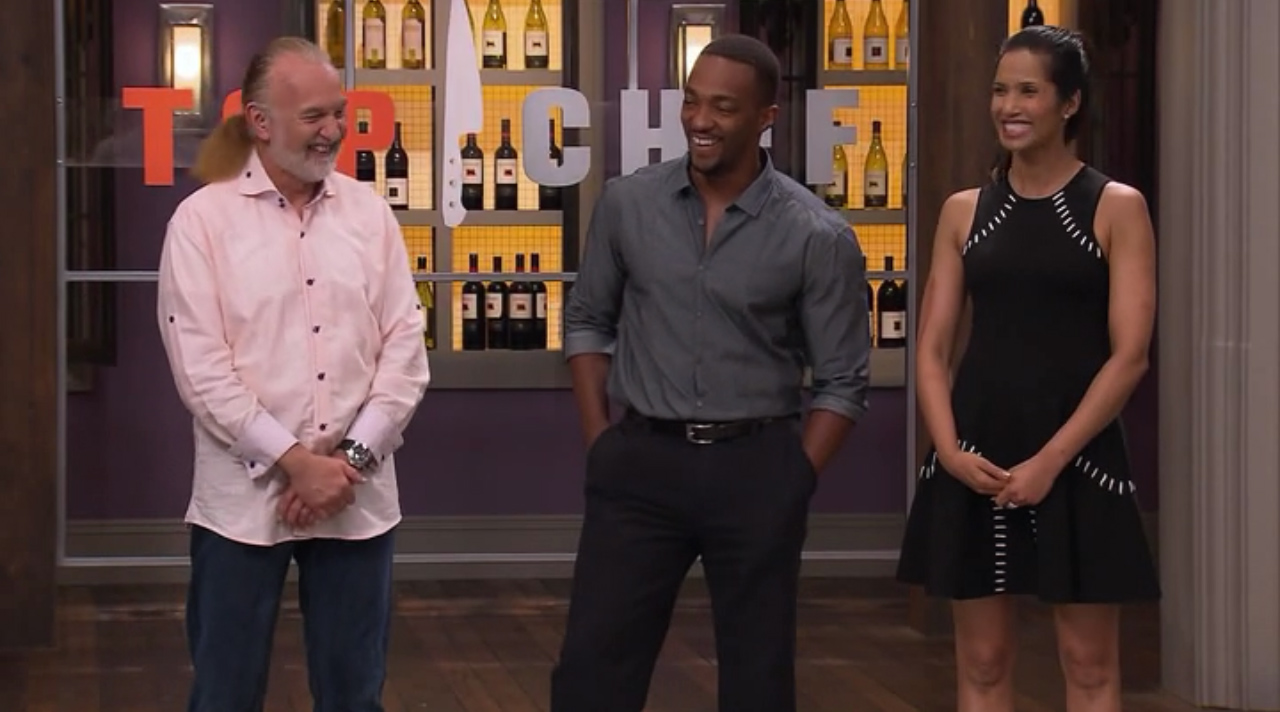 To introduce the Elimination Challenge, Padma introduces actor and New Orleans native, Anthony Mackie. I do not recognize him, though that does not mean he was not in some very significant movies (which he was). I only saw three movies in theaters in the last two years: the two Hunger Games movies and Magic Mike, and that barely even counted because I brought wine into the theater and kind of blacked out before it ended. That movie should have been rated PG-13 because I had like 13 glasses of Pinot Grigio during it. Anyway, according to Stephanie, Anthony was in her favorite movie, 8 Mile.

The challenge for the chefs is for them to make a dish inspired by what they crave when they go home, which was probably inspired by it being the holidays. I guess the idea is loosely held together because when Anthony comes home, he likes going to the famed Dooky Chase, and that's where the chefs will be cooking for the challenge. It's weird because he doesn't seem to have any projects to plug and he's probably not the only actor from New Orleans, but hey, every challenge can't be as conceptually straightforward as "Dunkin' Donuts Gives Us Money So Use Their Coffee."

All of the chefs are planning dishes around what they consider comfort food. Justin Devillier keeps talking about using squirrel meat in his gravy, which keeps making me nauseous because I have a rule living in New York: if it's an animal I can find here in the city, I do not want to eat it. Carrie's comfort food is creamed asparagus on toast because she used to go asparagus hunting with her mom. I'm from Maryland, so the dish that reminds me of home would be something like crab dip and a baguette. I'm also an unstable emotional eater, so I also kind of want to say a sheet cake. 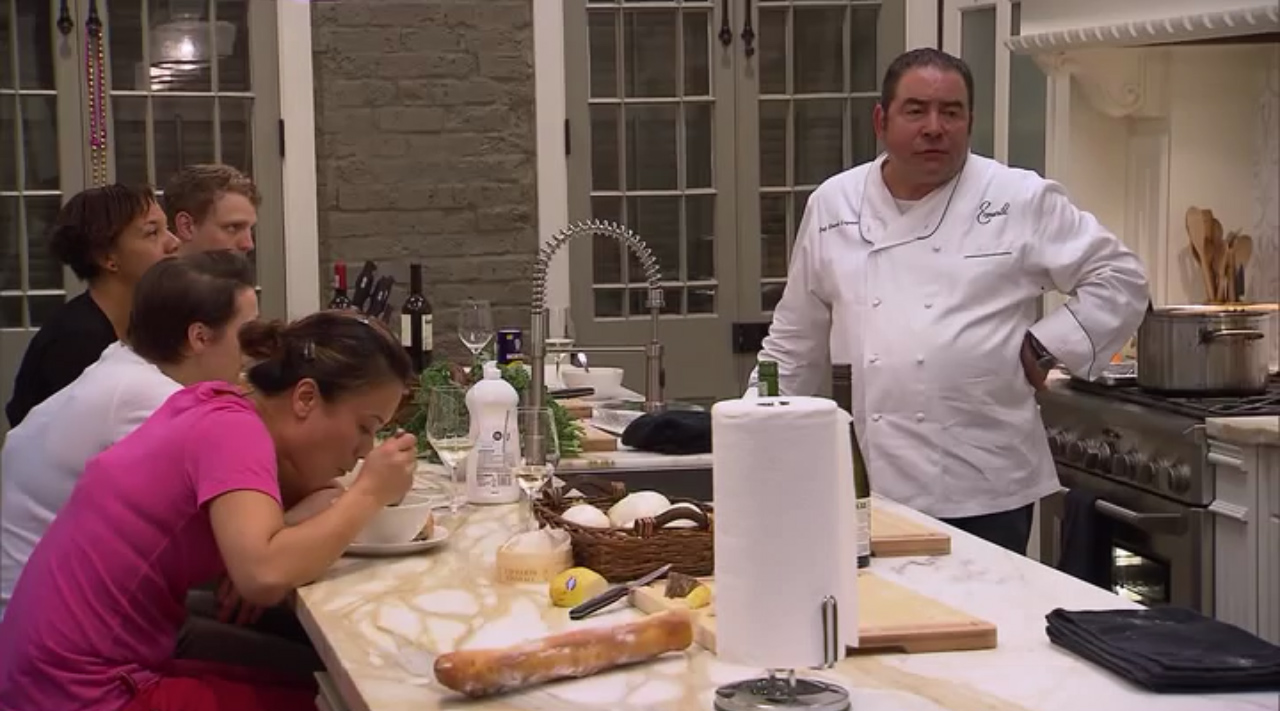 Finished with the first day of cooking the chefs arrive back home to the smell of something cooking in their kitchen only to walk upstairs and find it's Emeril Lagasse cooking soup for them. With the competition winding down, the chefs relax a bit more and kind of enjoy each other's company. They play a game each answering what three foods they would bring to eat for the rest of their life if they were stranded on a desert island, which I guess is the Fuck/Marry/Kill of the restaurant industry. I was pretty on board with Stephanie's answer of mussels, bread, and cheese. I think my three would be wine, cheese, and Xanax. Or maybe Bourbon, mango, and arsenic (yeah, of course I'd try and kill myself, who they hell wants to live on a desert island?). 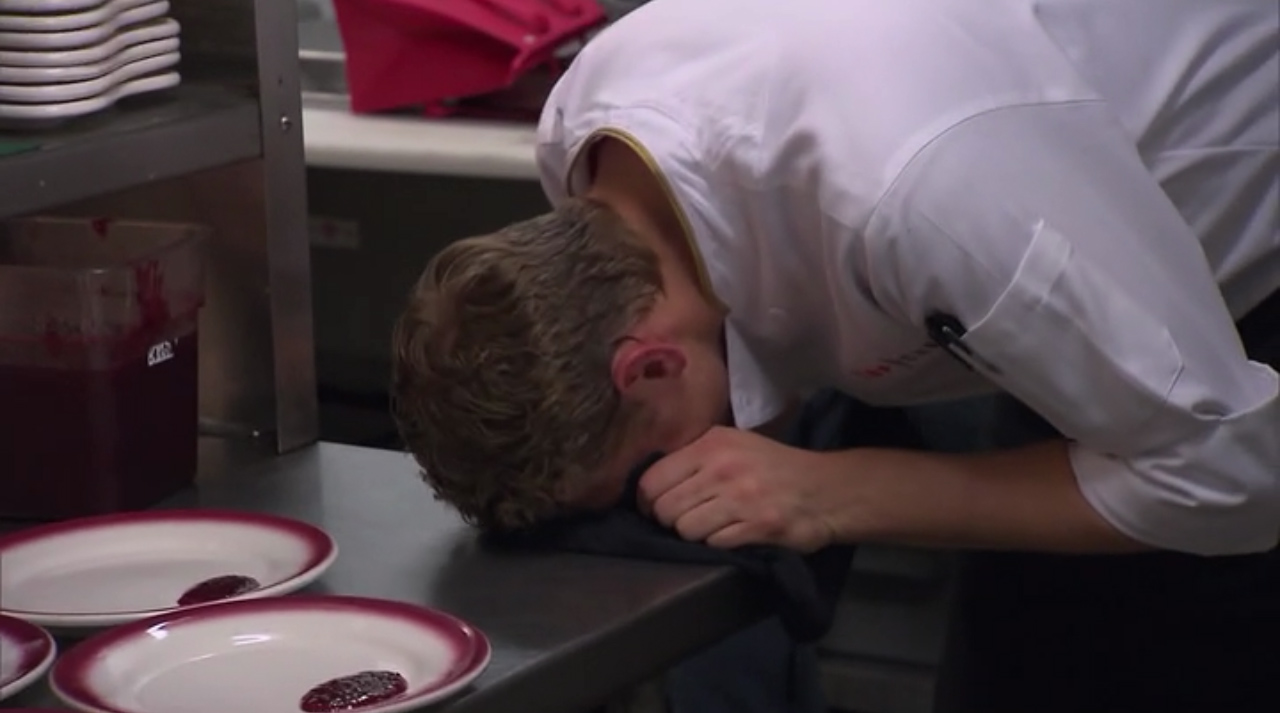 On day two the chefs are cooking at Dooky Chase where they will be serving dinner not only to the judges and guest judge, but also to legendary chef, Leah Chase, and some of her family. The kitchen is an emotional trainwreck, everyone extra-invested in their dishes because they have sentimental meaning or remind them of home. Travis Masar is doing biscuits with gravy and jam. While his test biscuits were perfect the first day, the batch he made for service is all wrong. He decides to put the gravy directly on the biscuits to try and disguise the texture problems. I know this trick. It's like when I first started finding gray hairs and was like, "Guys, guess what, I am really into hats now!" 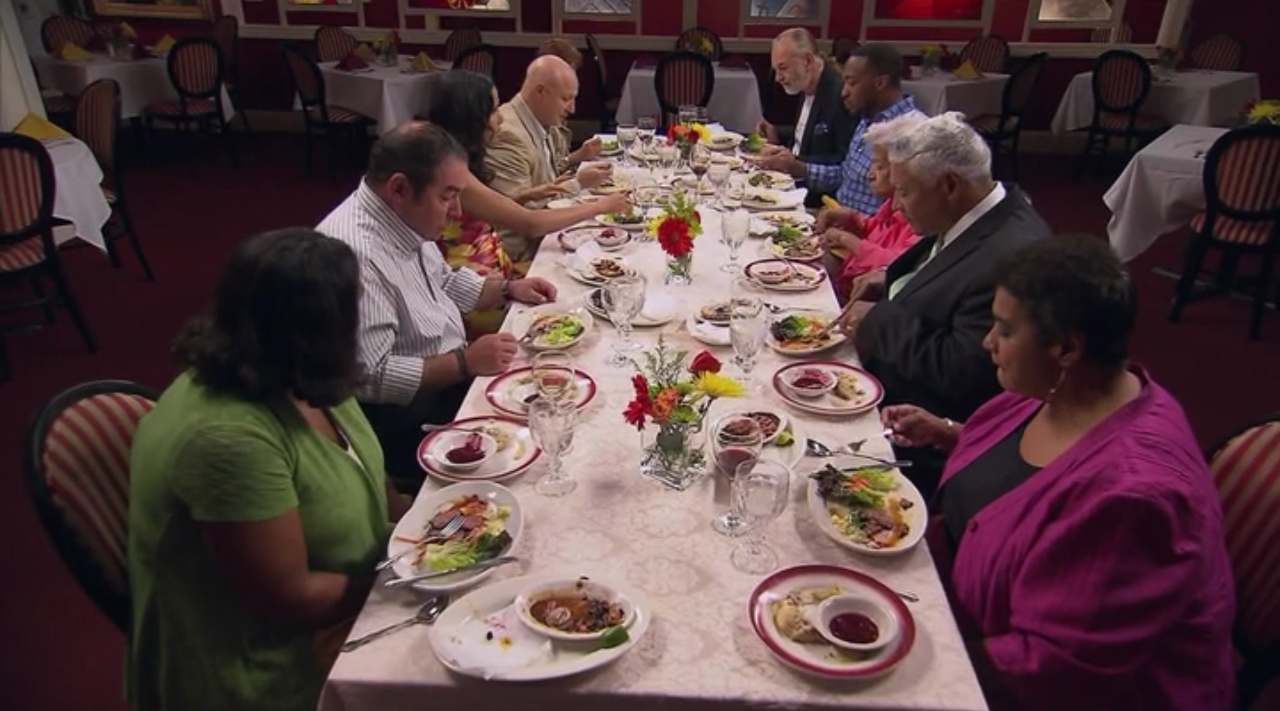 From the start of service the judges enjoy every dish to some degree. Everyone at the table loves Carlos Gaytan's cochinita pibil with black beans and a corn tortilla. Bryan's Korean BBQ New York strip with potato salad has a nice flavor, but lacks the charcoal taste of being grilled, which he lost when he arrived at Dooky Chase to find that there was no grill and he had to pan sear the meat. 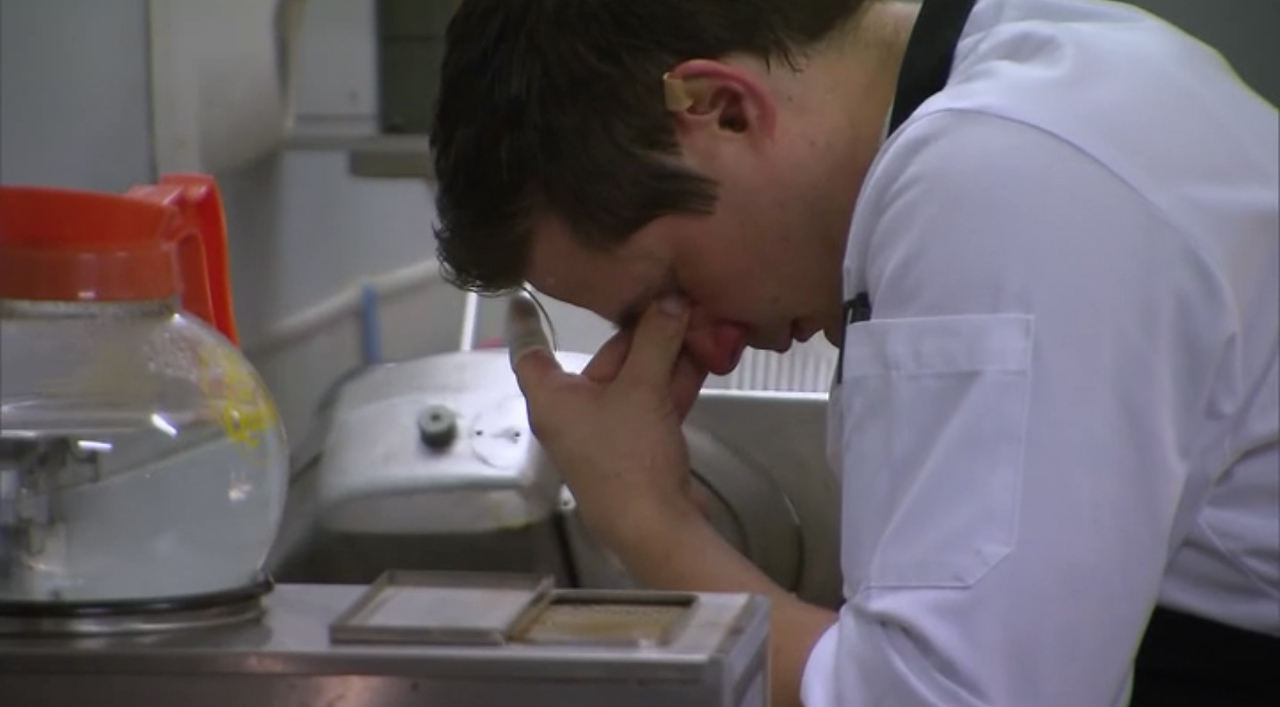 While plating Nick Elmi has a meltdown in the kitchen from a mix of stress and missing his kids, who inspired the dish he is making. There was more crying in this episode than in the cab ride home from a bachelorette party. 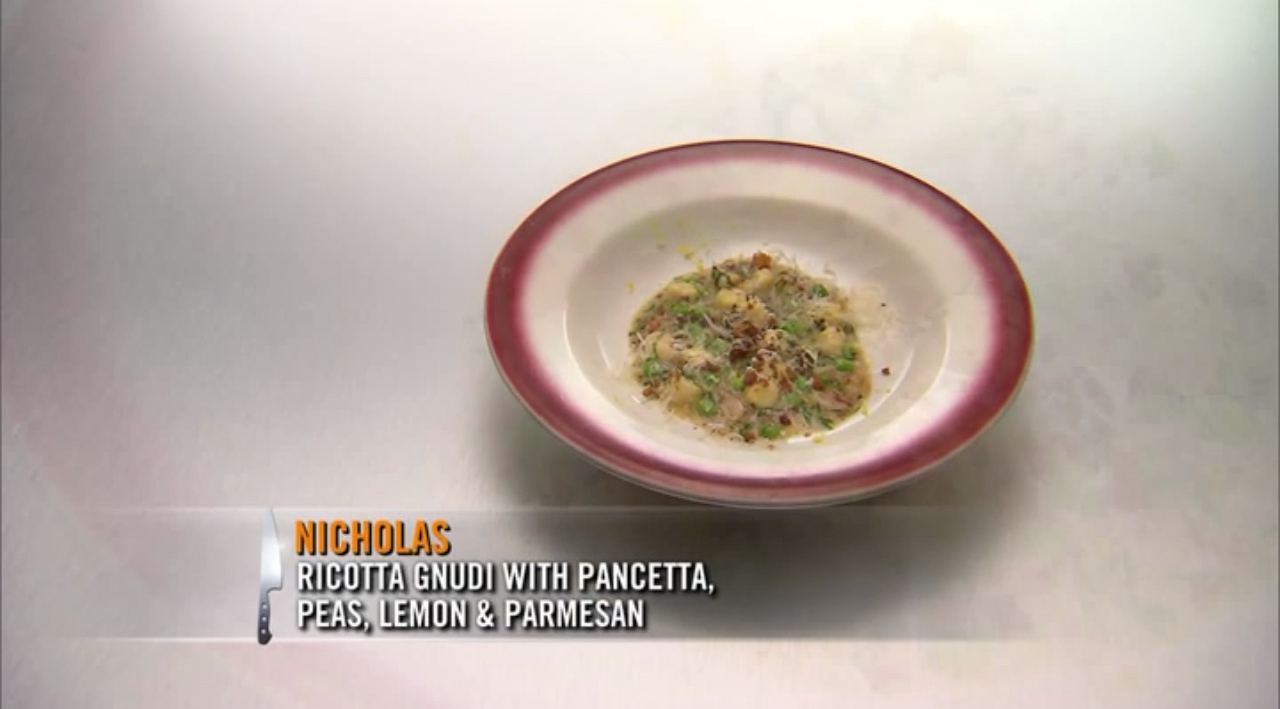 Nick pulls himself together and finishes, though chokes up again when describing his ricotta gnudi with pancetta, peas, lemon, and Parmesan to the judges. Thankfully for him they absolutely love the dish, as they do with Shirley's Beijing noodles and pork sauce. Stephanie explains she and her boyfriend like picking mussels, so she prepared mussels with spicy pickled peppers and tomatoes. 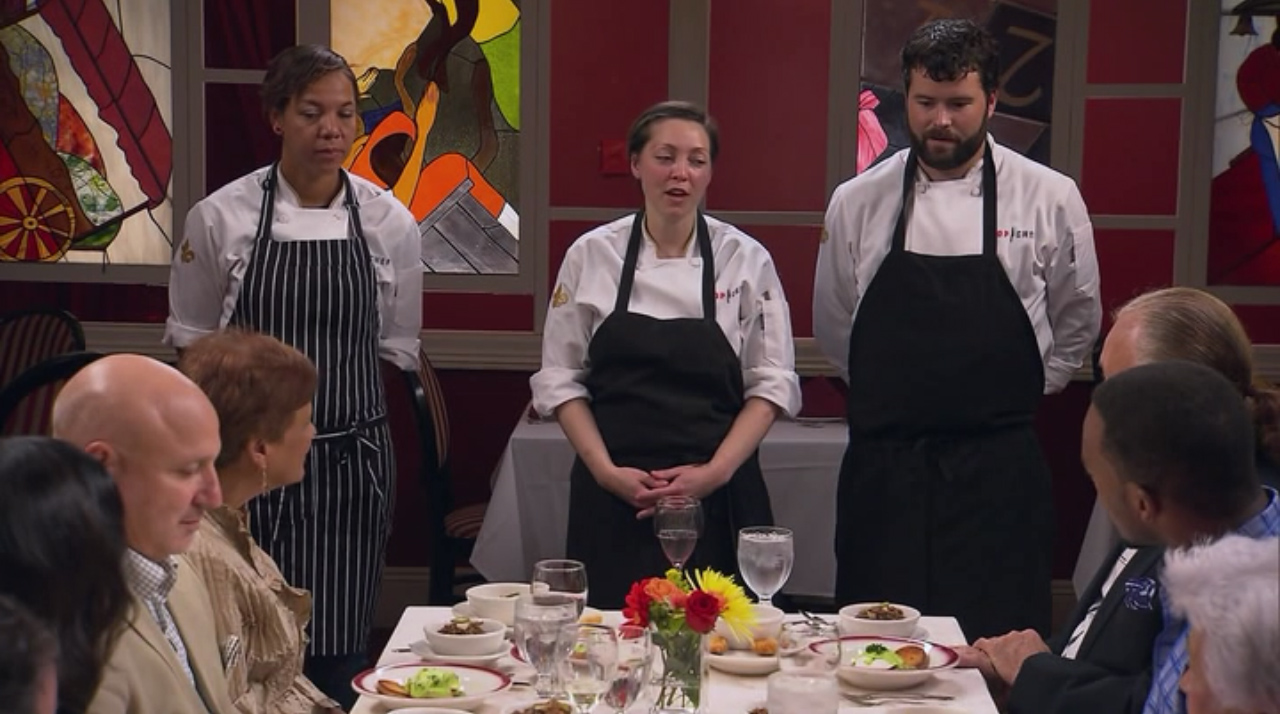 The next group starts with Justin's uncontrollable sweating and his Louisiana rice with chicken thigh gravy. I'm sure it's hot in the kitchen, but why is no one else just drenched in sweat during service? Maybe it's just more noticeable because of his thick hair? That, I kind of understand. Temperature goes above 75 here in New York and I look like I just climbed out of a pool. Everyone at the table likes his dish, but complains it needs more flavor and more gravy on the rice. Carrie's creamed asparagus over toast with a poached egg is a hit with everyone. 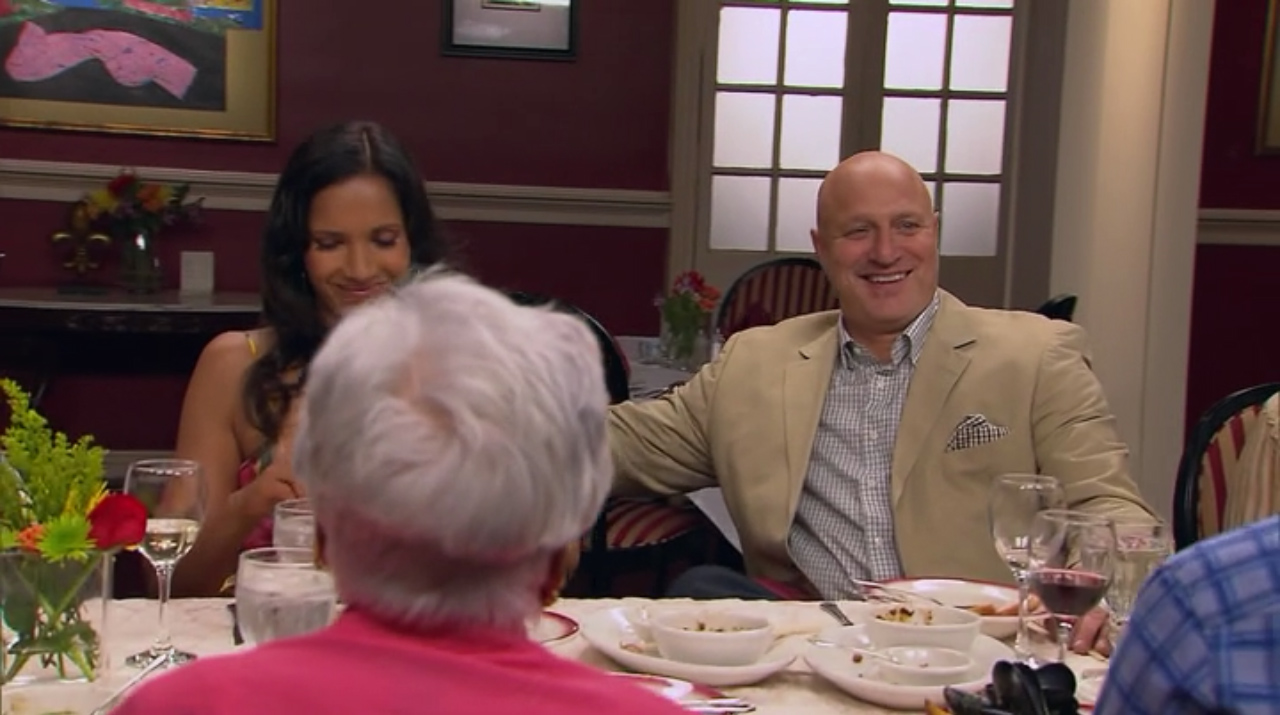 After dinner Tom looks to Anthony and says, "Are we having cocktails after this?" Anthony smiles and responds, "Give me a bucket of ice and a shaker." Then, with his arm somewhere around the back of Padma's chair, Tom say, "Here's the shaker." Then everyone laughed and laughed because what the hell just happened? 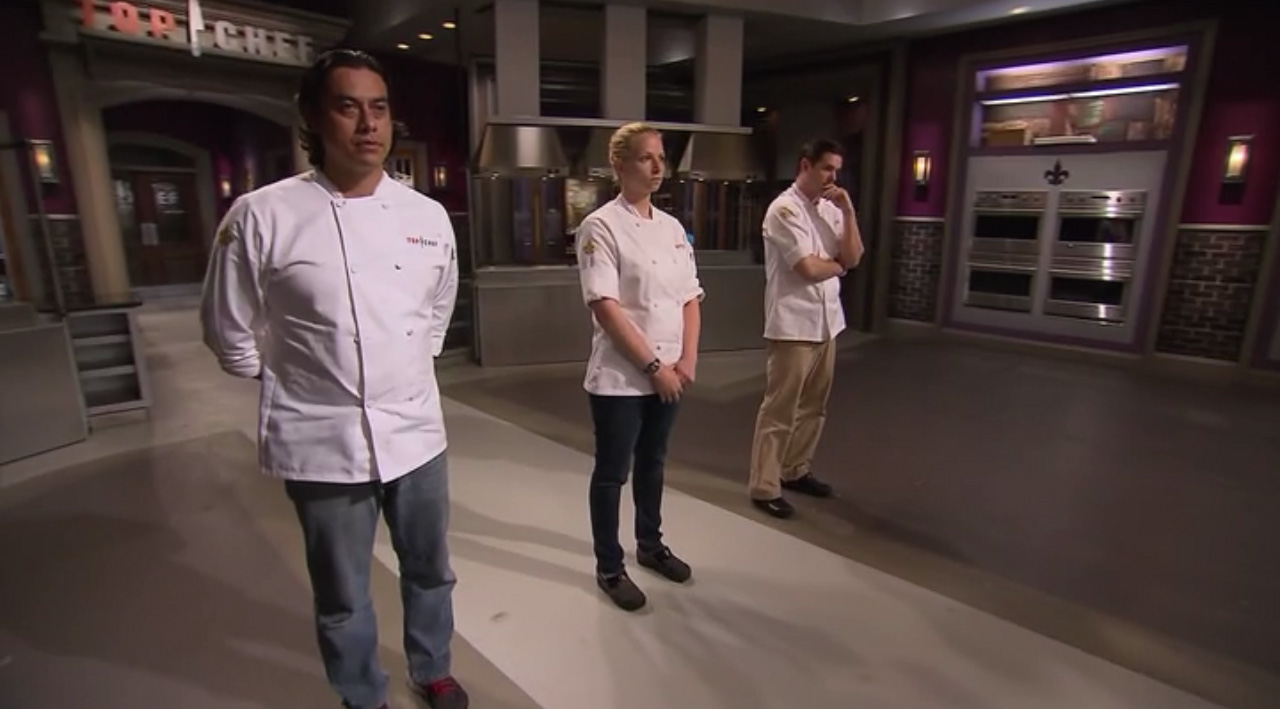 Back at Judges' Table Padma calls in Nick, Stephanie, and Carlos. They stand in the room for what feels like forty minutes while the judges sit motionless and stone-faced and tense Bravo music plays in the background. Padma slowly — and I mean even slower than her normal talking voice, which is so slow I sometimes forget what word she started saying by the time she gets to the end of it — tells the chefs that they are the top three in this challenge. Thanks for the suspense. This is only the 11th season of the show where 99% of the time the winners are called in first, yet Bravo still thinks it can trick us with suspense. After that long, drawn out introduction and then a round of compliments from all of the judges on each of the dishes, they announce that Nick is the winner for the second challenge in a row.

The bottom three are Travis, Bryan, and Justin. Now that it's getting later in the season, the obvious eliminations are over, and chefs are sent home for small mistakes in otherwise good dishes. Bryan's dish suffered without an open grill, Justin's needed more gravy, Travis's biscuits weren't quite the right texture. It's kind of like dating. Everything else about someone could be wonderful and compatible with you, and then you find out one little thing, like he "still hasn't broken up with his ex-girlfriend yet" and you have to end things. 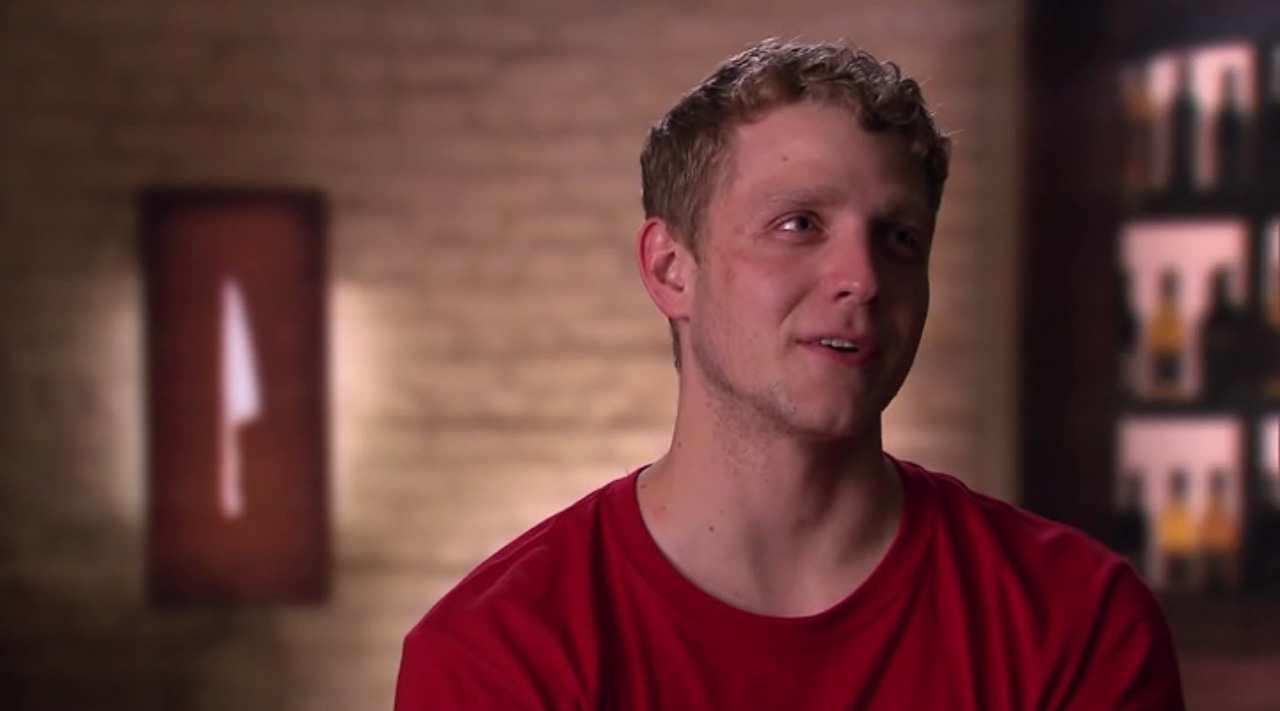 Justin, upset he is in the bottom again says, "It's just a super complex dish that's really simple." I have tried to understand what this sentence means for several hours, and now all I have is a headache and some self doubt that I know what any of those words mean. After the judges deliberate, Travis is sent to pack his knives and go. I'll miss Travis. He was pleasant and friendly and had that obsession with Asia that only the whitest people can have.

The promo for next week shows the chefs in a dining hall, so I'm already yelling in my head (okay, out loud at my television alone), "College! No parents!" Should be a fun one, I look forward to not moving from my couch until it airs.