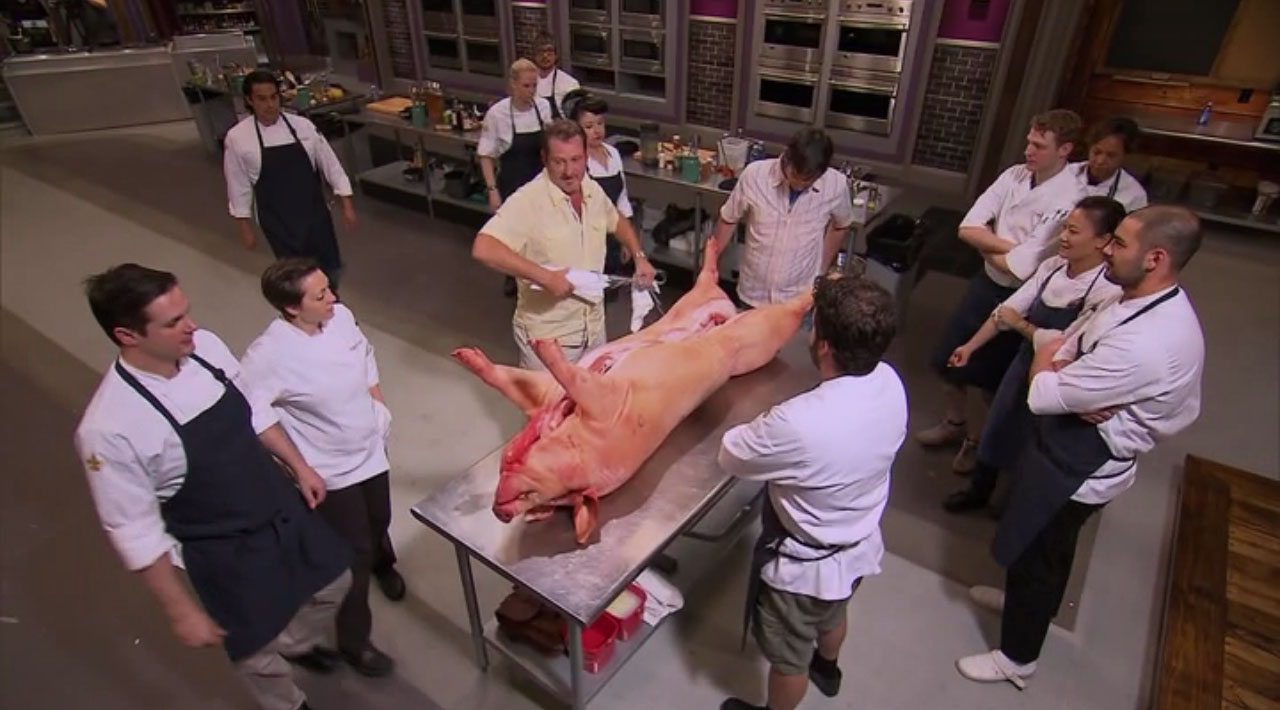 The best part of watching this week's Top Chef was being able to enjoy the show while Marcel Vigneron from Season 2 made me dinner in my home. No, we're not personal friends, I bought him for the evening. And no, definitely not for sex stuff. Anyone can buy one of the popular past contestants for a night of private use thanks to Top Chef's partnership with Kitchit. Don't worry, if you don't have that much money to spend on a reality show chef, you can opt for a less popular one. They're priced on a sliding scale that I'm sure isn't personally offensive to the chefs at all. 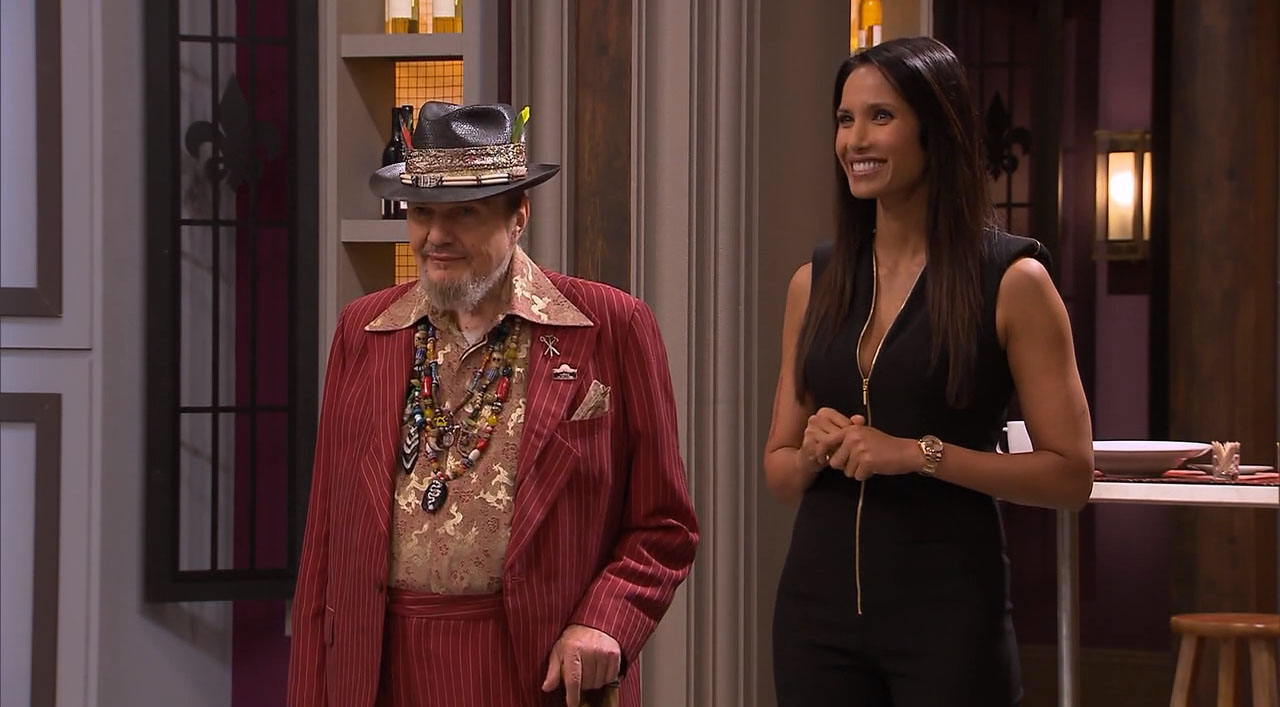 Now, for the chefs who have yet to be sold into cross-promotional slavery, it's Quickfire time in New Orleans. When the chefs arrive in the kitchen they are greeted by a man in alligator loafers, a red suit, no less than fifteen beaded necklaces, and a colorful walking stick. Next to him stands Padma Lakshmi in a black catsuit. Together they looked like Rafiki from The Lion King turned into a pimp and is dating Catherine Zeta-Jones from the movie Entrapment.

Padma introduces this man as Dr. John, a Grammy award-winning musician and Louisiana local. She explains that the Quickfire Challenge is to make and bottle a hot sauce. But it can't just be your run of the mill hot sauce, it has to impress Dr. John and, specifically, has to have "hip tang." If you don't know what that is, allow Dr. John to explain in one of his many live-tweets of this episode:

Makes perfect sense, right? When explaining the challenge Dr. John describes hip tang as, "Flavor nicety of the highest order, and tang nicety and it mixes in, hit it, can't quit it." At least, I think that's what he said, there were no subtitles, though there should have been because his voice sounds like he's underwater. 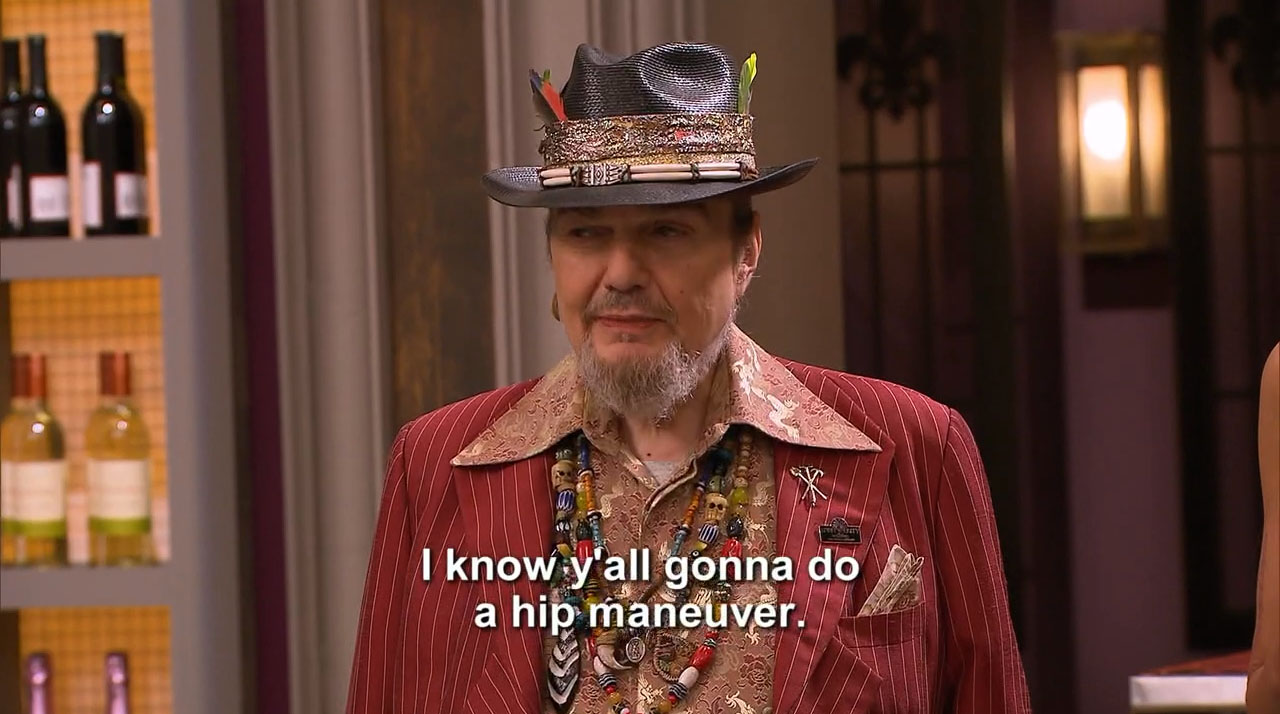 They did caption a few of his lines, but even with the words flashed on the screen I still have no idea what he is actually saying. His lines sound like a stoner trying to tell a riddle. If Bravo is going to include subtitles for a Pinot Grigio-fueled cat fight on The Real Housewives of Atlanta, they could certainly help us understand a little more what the hell Dr. John was saying. 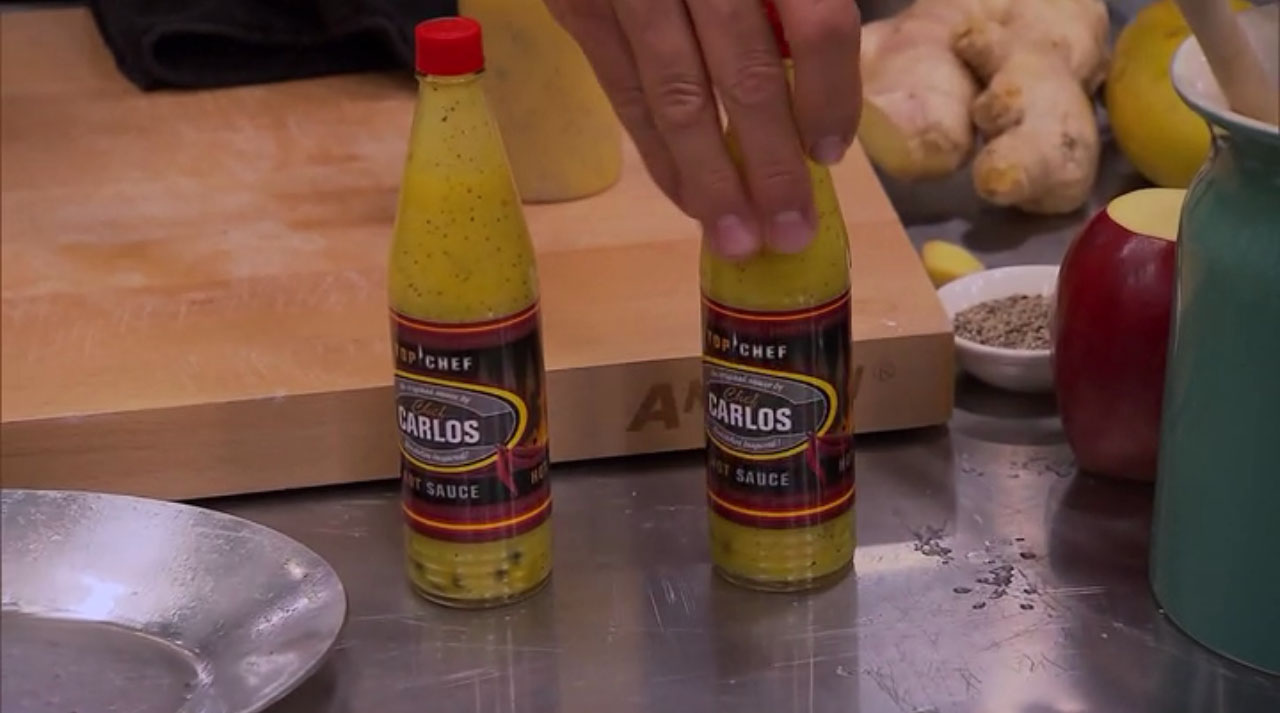 Carlos Gaytan is feeling the pressure on this challenge because he is a Mexican chef, while Bryan Huskey worries he'll be judged more harshly because he is the head saucier at the restaurant where he works. Nick Elmi isn't the biggest hot sauce fan since he got his first ulcer at age 20. But Nick, what do you put on your hangover eggs after a night spent shotgunning beers until you drunkenly raid a guy's kitchen, find a bag of marshmallows and a jar of fluff, yell, "YOU DO NOT NEED BOTH!" and throw the fluff in a trash can? A breakfast sandwich without hot sauce cannot help you come back from that. Trust me. 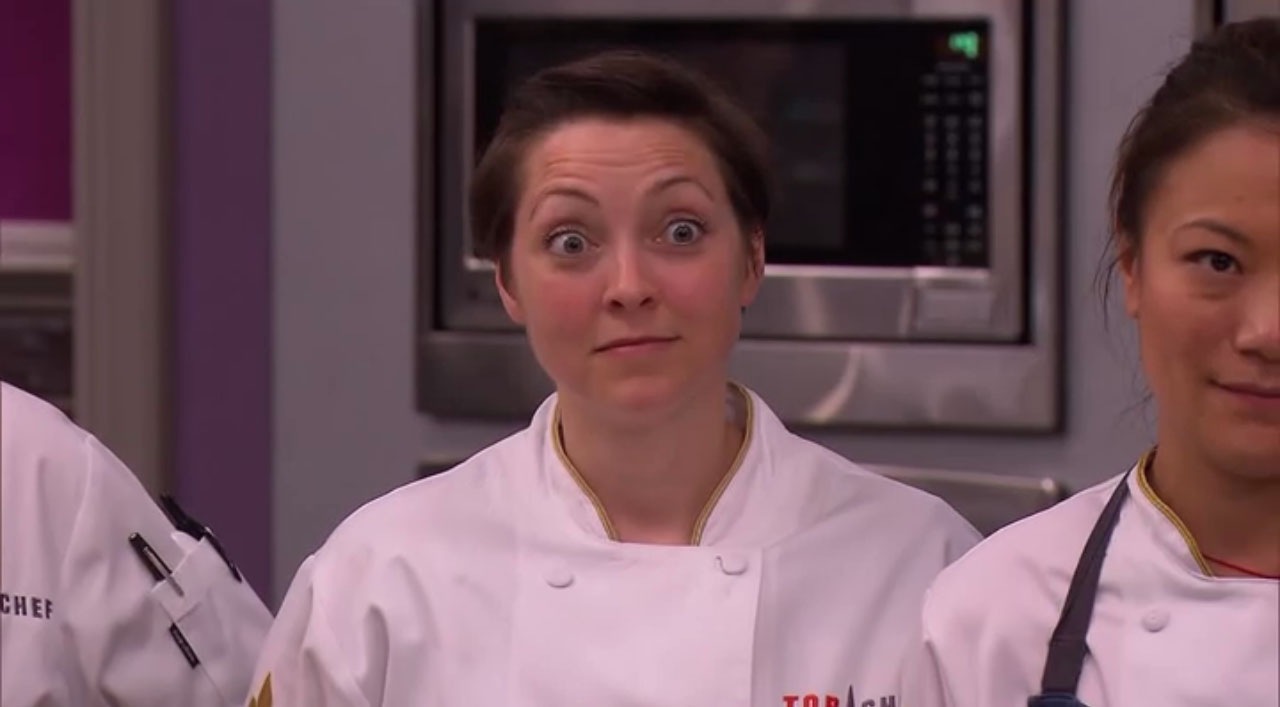 No one really had any idea what Dr. John thought of any of the hot sauces since he's harder to understand than the Obamacare website. Padma really tries to act as an interpreter, but mostly just smiles and nods after his reactions. Dr. John did not like Carrie Mashaney's sauce. He described it as "Trinedeadly" which sounds kind of racist, but when the person saying it has one long dreadlock, a walking stick with gourds hanging off of it, and is wearing more jewelry than a suburban Claire's boutique, it's just like, you do you. 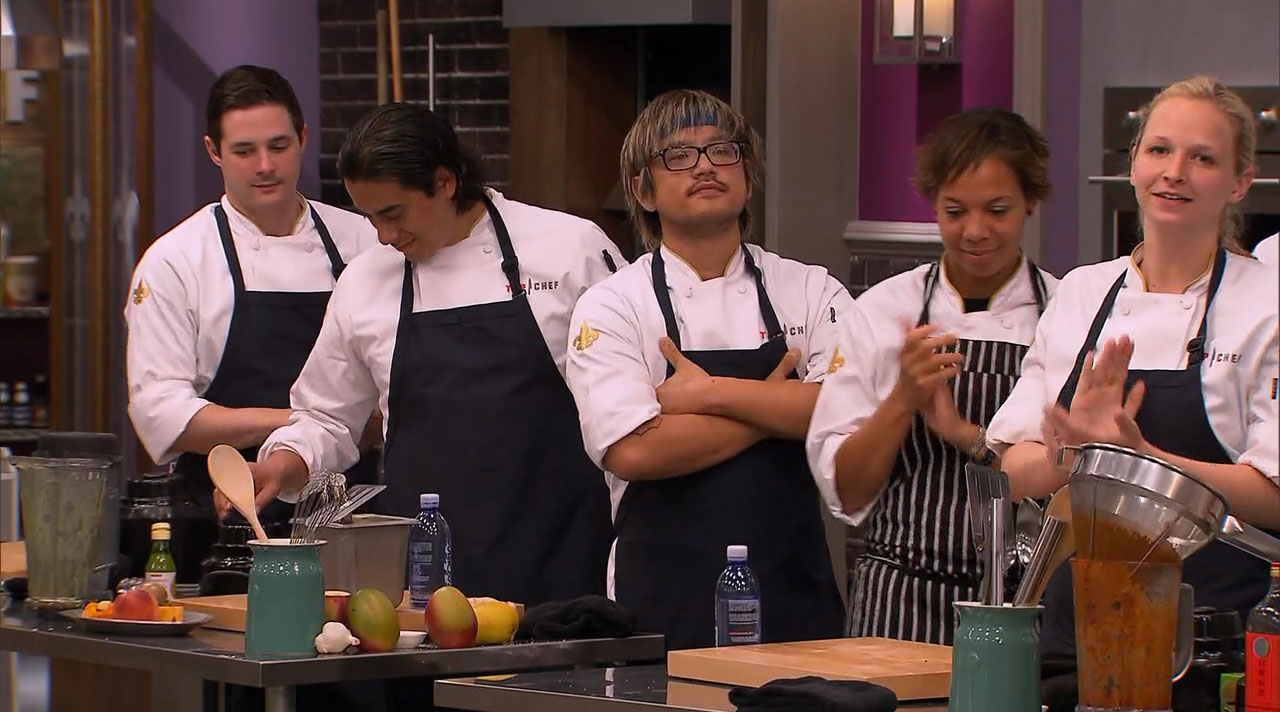 The winner of the Quickfire is Bryan for the second week in a row, earning him immunity from elimination. This ends our time with Dr. John, but you should follow him on twitter if you like things that are not written in English but are also not any other language either. 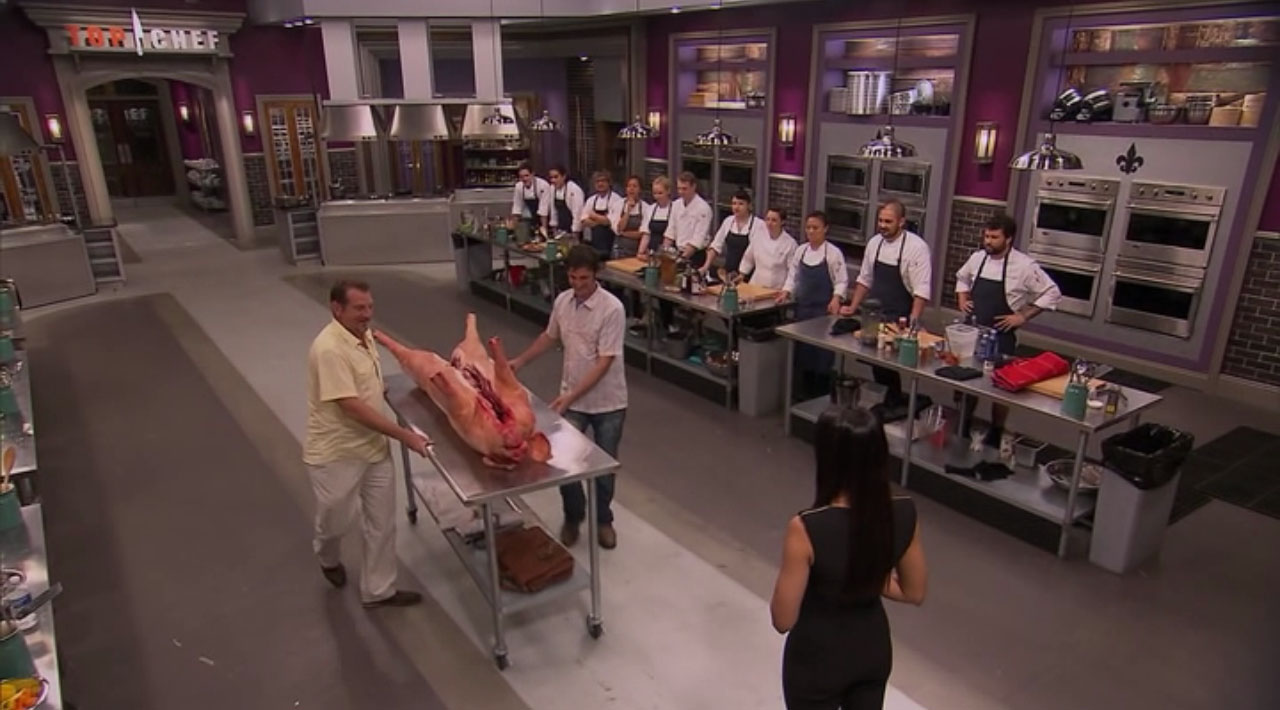 In what I hope is not a follow up to the movie Babe: Pig in the City, the staff wheels in a giant dead pig on a cart. Padma introduces butcher Toby Rodriguez, and guest judge for the challenge Donald Link. They explain that the Elimination Challenge will be a boucherie, where all eleven chefs must work together and use all of the 300 pound pig before them. Each chef will be responsible for one dish, but as a whole, they have to break down and use the entire animal. 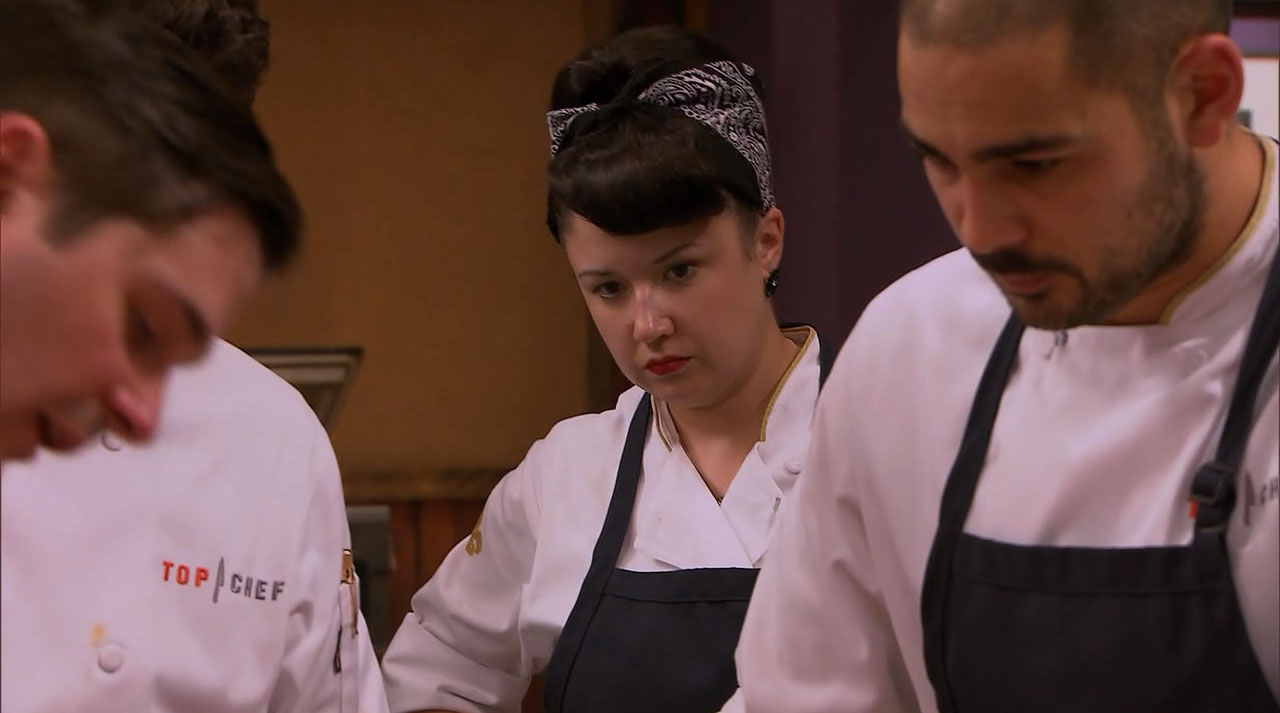 Several chefs have experience butchering, so they take control. Nick starts by decapitating the pig and carrying the head around Lord of the Flies style. From the beginning Sara Johannes and Nick are butting heads. As he's helping break the pig down, Sara is behind him telling him what to do. I, personally, don't like to boss around people who are holding knives, but that's just me. I also don't like wearing Rosie the Riveter scarves in my hair, so Sara and I have a lot of differences. 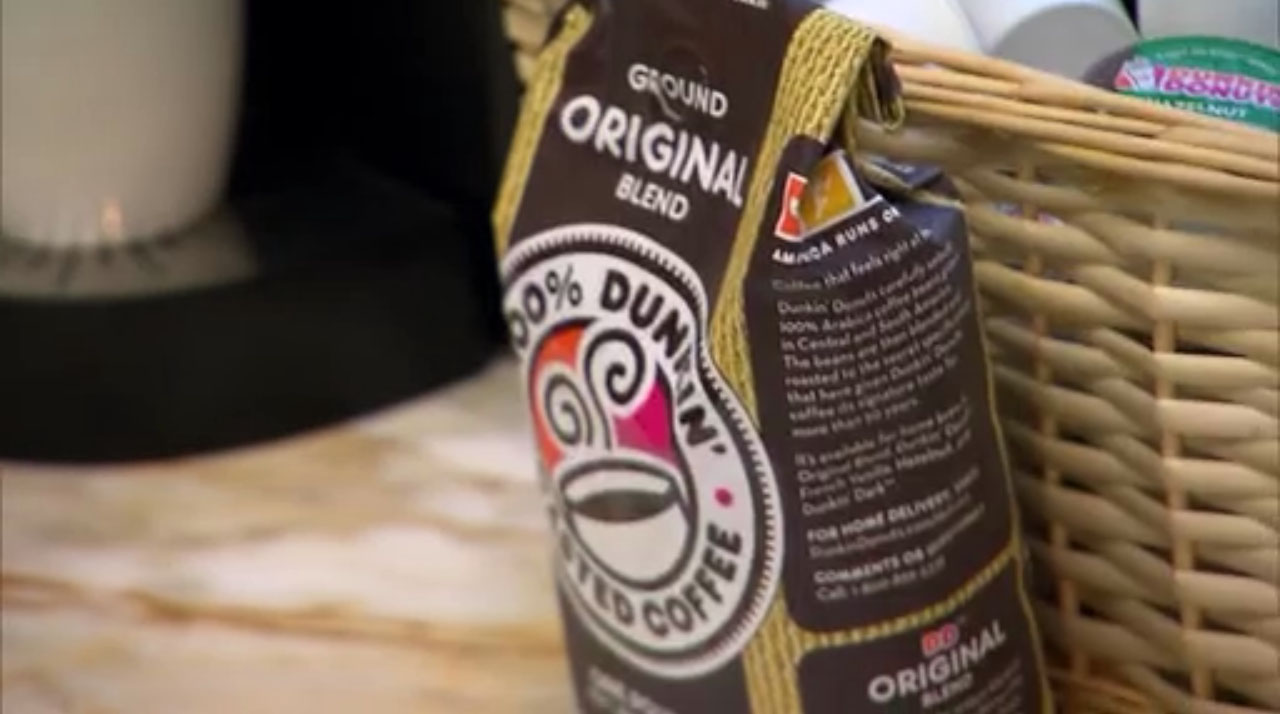 The next morning the chefs all have to wake up extra early to cook all day. As they are all starting their day, the camera lingers on a bag of Dunkin' Donuts coffee long enough for me to know that product placement cost more than my college education, and probably has a higher return on investment at this point, too. Nick condescendingly says that since he has kids he is used to waking up early and everyone else is going to be struggling. Look, I don't have kids (WHICH IS OKAY) and I'm great at waking up early to do things like scream profanities at my upstairs neighbor for listening to techno music on full volume at 7am. 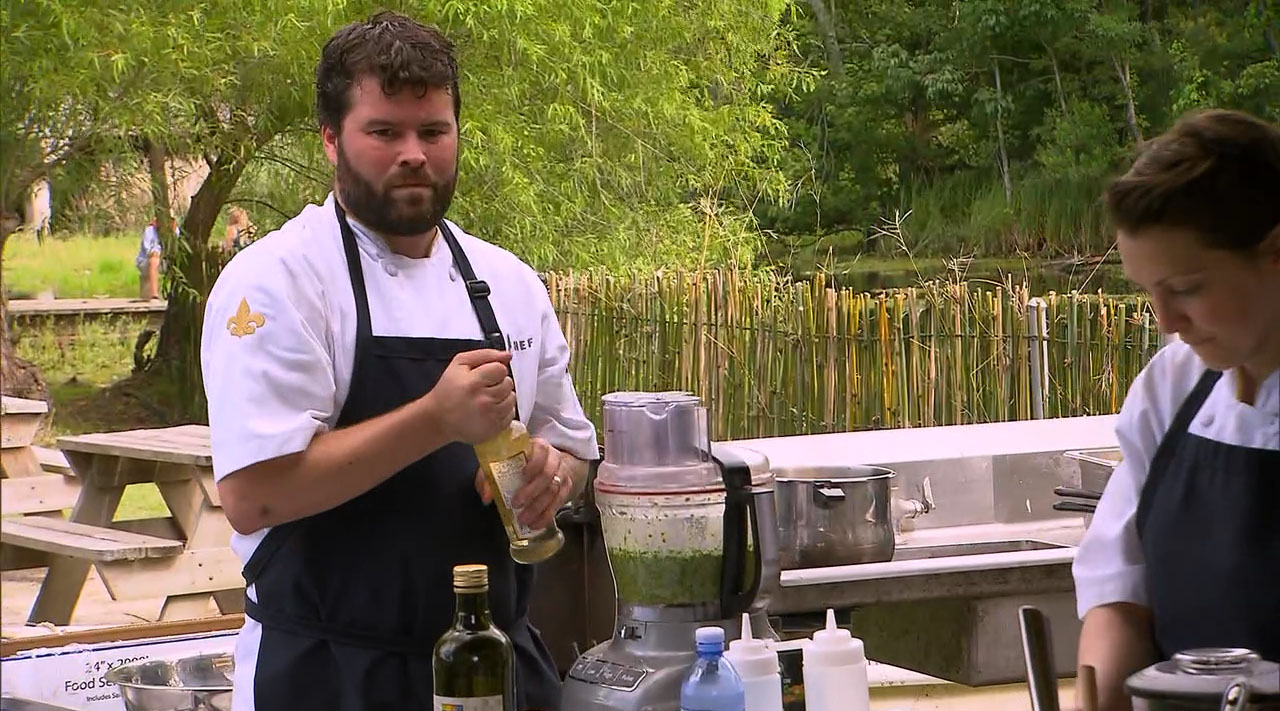 At the site, the chefs all have to get acquainted with outdoor cooking equipment. There are smokers and pits and boxes and while it all looks like torture equipment, they all seem pretty excited to use it. Justin Devillier builds a fire at one of the grills that he plans to use all for himself, but once he has the flames going several others come and put their pots on it. Sounding a little like the answer to a Billy Joel song he says, "If I didn't start the fire, no one would." After asking everyone to remove their cookware, Nina Compton tells him to, "Suck a dick." Round of applause, Bravo editors. And I thought the only times I would hear that phrase today would be the six times I heard it on the subway.

The outdoor cooking site has its challenges. Stephanie Cmar freaks out after noticing an alligator is separated from her by no more than a shoddy net. Nothing makes cooking meat easier than being a few feet away from a living dinosaur. 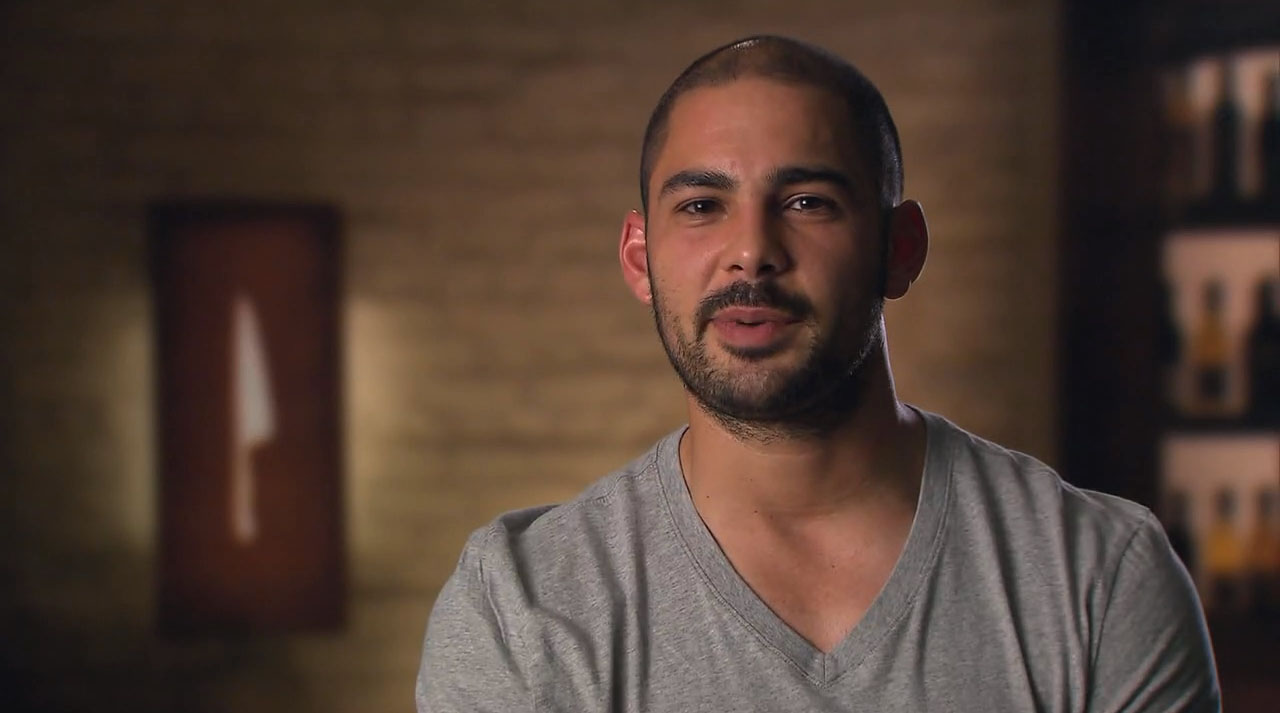 As Louis Maldonado is cooking he's talking to the other chefs politely, yet also uncomfortably, in a tone that's cleared up when he tells the camera that he's made more friends in the last few weeks than he has in his entire life. While he didn't explicitly say the quintessential, "I'm not here to make friends," I know he was thinking it. I'm with you, Louis, I never plan on making friends! 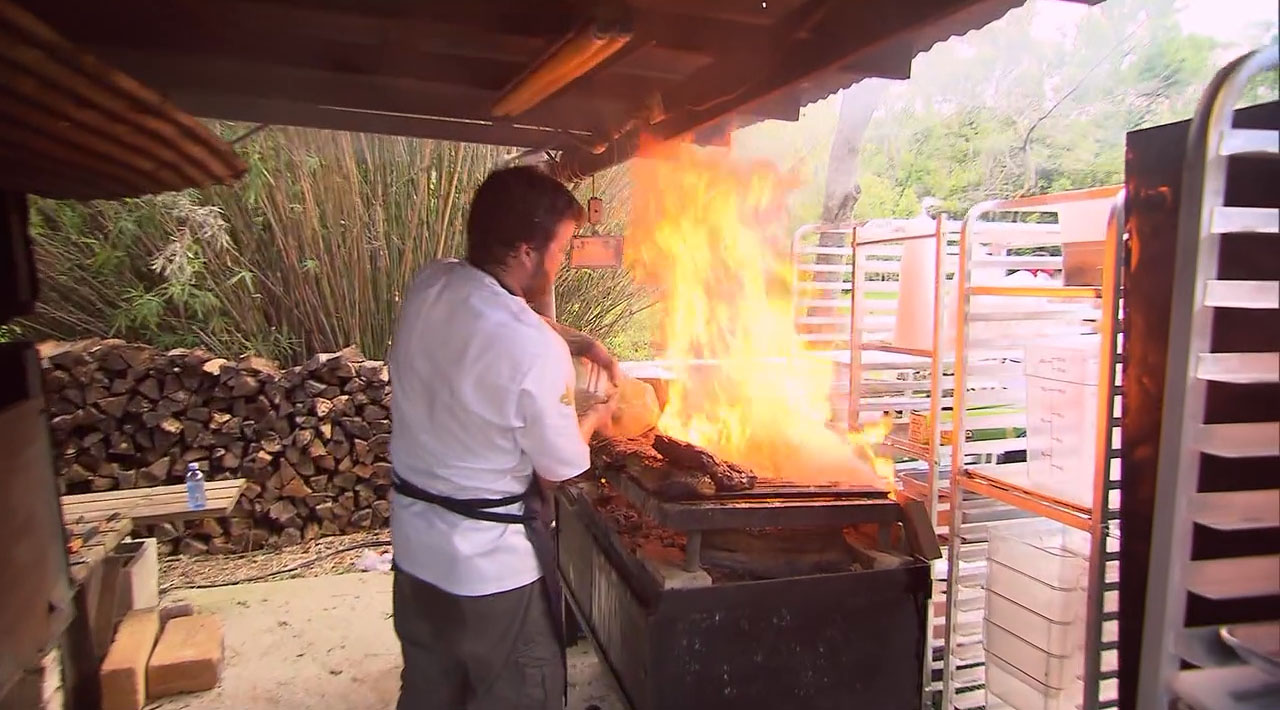 At one point, giant flames emerge from Justin's private grill area. He manages the heat, but worries that his pork is going to be dried out or overcooked. Nina tastes her dish last minute and feels like it isn't quite what she wanted, so she throws in more cayenne pepper with only two minutes until service.

The guests and judges arrive. Tom Colicchio is just a backwards baseball hat away from being in full bro-mode and Padma is donning her second catsuit of the episode. As the judges walk around from one station to the next, Tom with Hugh Acheson, Padma with Donald, they seem to genuinely enjoy virtually every dish. There were no train wrecks, no nightmares, no "what the hell happened here?" Arguably this comes down to the fact that pork is the best food there is. 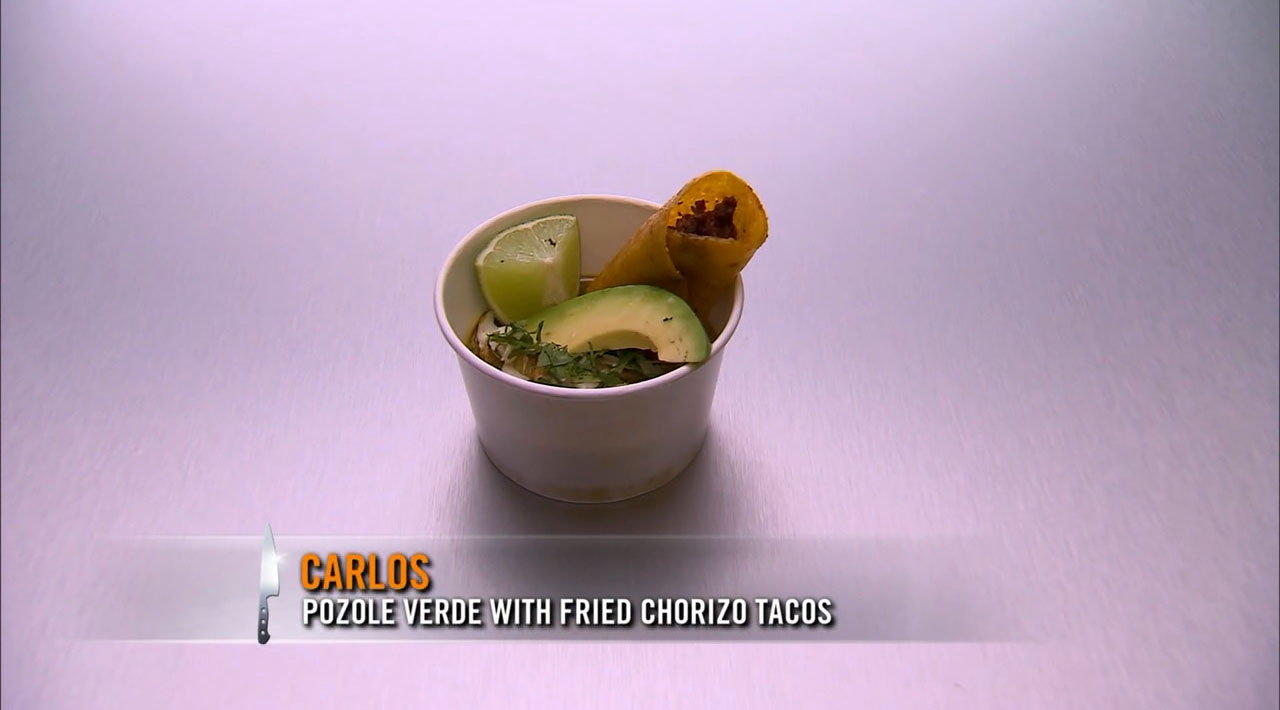 Carlos made a pozole verde with fried chorizo tacos, a recipe from his mother which apparently draws people from four hours away when she makes it. I'll be honest, I would travel four hours for stellar Mexican food. I listen to a lot of podcasts, so it would help me get through some of those. Bryan makes porchetta with oyster mushrooms that Padma and Donald enjoy. Shirley Chung's jiaozi dumplings with pork, grilled kidney, and pork fat salad recall the cooking she did with her mother and grandmother.

A small child points out that Hugh spilled food on his shirt, which he thinks is Travis Masar's Cajun style pork ramen. It must be so hard being a judge at these events, you're constantly eating from weird small plates while standing. I'd be constantly spilling food on myself. Frankly, I did tonight, and I was sitting on my couch. If any of you out there know how to get a hummus stain out, let me know. So far all I've learned is that the solution is not to accidentally spill red wine on the same spot.

At Judges' Table Tom says that this is the most enjoyable food he's ever had on the show in all eleven seasons. Donald adds that the dishes all felt authentic to the ethnically diverse chefs in the competition, and that was possible because every ethnic group has a way they cook a pig. Um, what about us Jews? Don't get me wrong, I definitely eat pork (like, a lot), but we don't have a cultural pig cooking method by any means. Loud opinions and sensitive digestive systems, sure. But pork recipes? Not really. 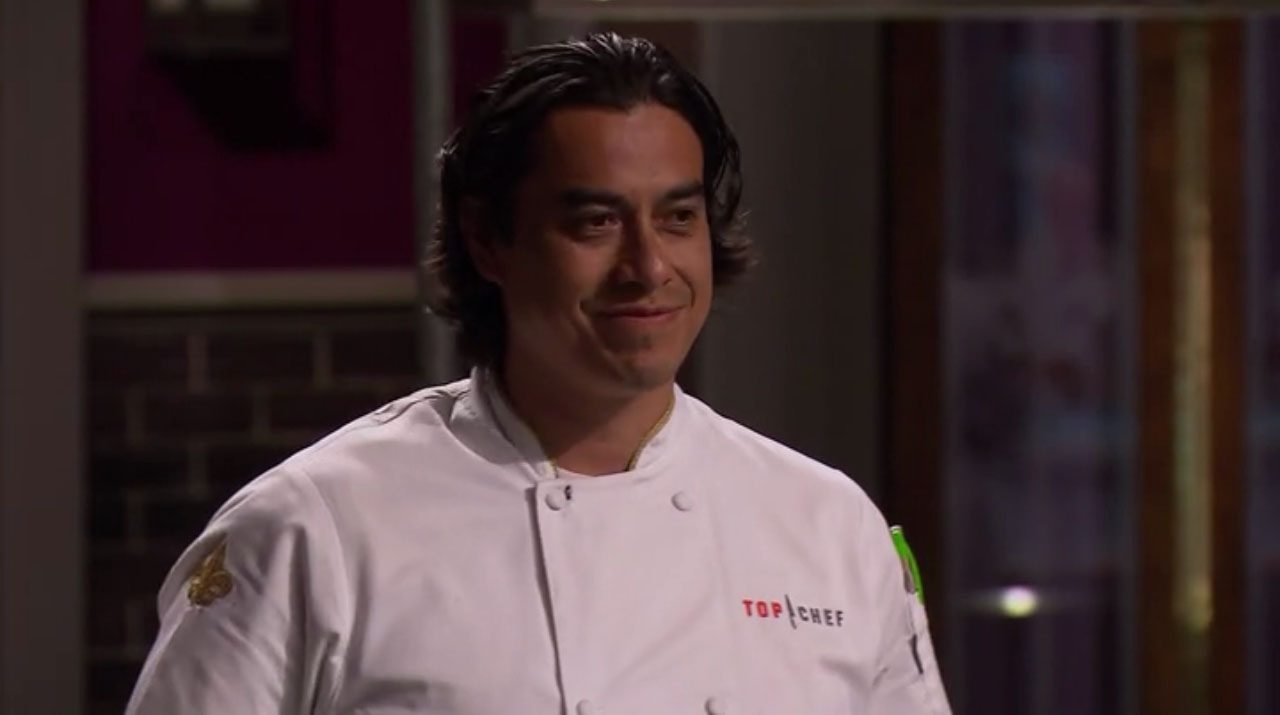 The favorites are Shirley, Nina, and Carlos, with Carlos winning the challenge for his pozole and tacos. The judges' least favorites are Louis, Stephanie, and Justin. Tom notes that they are all good dishes, but they each had flaws. Sadly, Louis is sent home for his confusing slow grilled pork leg with shiitake mushrooms and popcorn.

Louis will get to return to his family, but sadly has to leave all of his new friends.