Harvard University's third annual Science & Cooking public lecture series brings chefs from around the world to lecture on the intersection of science and cooking. And Eater Boston contributing writer Gabe Bellegard Bastos is on the scene. This week: David Chang of Momofuku. 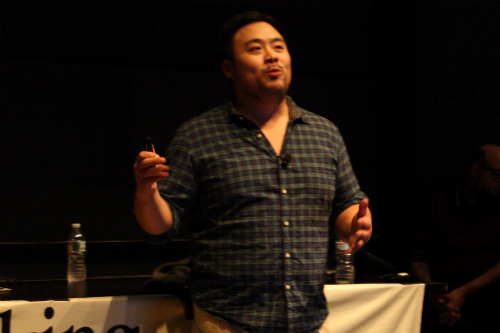 Yesterday, Harvard's lecture series continued with chef David Chang, who delved into the microbial world to explore a single process — fermentation—which, at its most basic level, is the breakdown of sugars and proteins to smaller molecules. Or, as Chang described it, "when rotten goes right." More specifically, his lecture focused on fermentation by Aspergilus oryzae, or koji, the fungus responsible for the conversion of grains, such as soy, into soy sauce, miso, and sake.

The lecture began with an admittedly "over-the-top trailer" featuring close-up shots of the star of the evening, Aspergilus oryzae, lauding fermentation as "the machinery of flavor." Chang believes that what makes his subject different from others in the lecture series is that fermentation is not a new technique; it's the production of new flavors. When he first started giving this lecture four years ago, his goal was to produce "pork-bushi," or a pork variation of katsuobushi, bonito fish that has been dried, fermented, and smoked. This collaboration between Chang and Harvard scientists Rachel Dutton and Ben Wolfe eventually led to the epiphany that microbes are intimately tied to the production of umami. "Microbes produce enzymes, enzymes develop amino acids, glutamic acid + aspartic acid = umami, umami = delicious," he explained.

In order to show what Chang means by that, Dan Felder, the head of Momofuku's R & D lab, showed an instructional video. Although Chang had originally requested an animation, the fact that Felder only had 24 hours to produce the video ultimately undermined its production value to entertaining effect. Thankfully, the video's educational content was intact. In it, Felder compared larger molecules, such as peptides (long chains of amino acids), to a steel scrub and protease enzymes (biological molecules that cut proteins) to a wire cutter, slowly reducing the scrub to very small metal fragments.

It should be noted that proteases are not the only catabolic enzymes produced by microbes. By controlling the "3 Ms of Fermentation" — the microbes, the medium (what the microbe will be breaking down), and the modifiers (such as humidity and heat) — it is possible to control what its major product will be. Aspergilus oryzae is also responsible for the production of sake. The difference is that instead of peptides being broken down into umami-creating amino acids, sake production depends on large sugar molecules being broken down into ethanol by amylases. Since "fermentation is not magic," it is relatively easy to predict what the major products of fermentation will be, and how much of them will be produced. Through dimensional analysis, sake brewers can convert the amount of sugar they added into the sake's final alcoholic content. 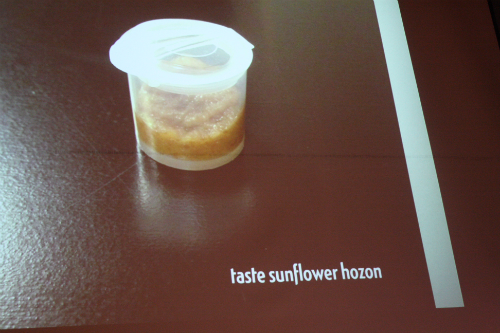 As central to Chang's cooking as umami may be, his interest in Aspergilus oryzae is also motivated by his frustration with the poor quality of imported products. He reminded the audience that the white truffle, olive oil, Parmigiano Reggiano, and more relevantly the miso and soy sauce imported into the United States are "crap". Said Chang: "The rest of the world sends us their worst." He hopes to be able to produce some of these products here in the US, with American ingredients, and match the quality of their foreign counterparts.

Chang brought with him three different examples of Japanese-inspired food products that were produced in his lab with ingredients native to the state of New York: a sunflower seed "hozon," a farro "bonji," and "XO" from the solid remains after the farro bonji has been pressed. These products underscore a question of nomenclature. Namely, is a product technically miso if it was't derived from soy? Chang, Felder, and Ryan Miller, Momofuku's product development chef, have opted to use "hozon" to refer to miso-like products, and "bonji" to reference products similar to soy sauce. More importantly, do these products taste American or Japanese? According to Chang, "they taste like New York." This claim is supported by the fact that, even though "fermentation is a cultural universal," the species and strains responsible for fermentation differ greatly by region and those seemingly small differences have profound effects on taste and texture.

Chang devoted the end of his lecture to highlighting the challenges he and his team have encountered. His research team has recently moved into a new, larger facility, enabling them to go from producing one kilogram of hozon to as much as sixty kilograms in a batch. To the team's surprise, this increase was not as simple as "multiplying all our ingredients by sixty." Chang recounted meeting a koji master in Japan and at first being surprised that after the rice had been cooled, the master was the only one to ever touch the koji. After multiple failed batches, Chang understands those restrictions and how delicate a process manipulating microbes can be. For this reason, Chang and his team have followed very strict scientific research guidelines, abiding by the "question everything, embrace failure, and write it down" paradigm. Chang rejects the idea of luck, preferring the concept of "making the right mistakes." 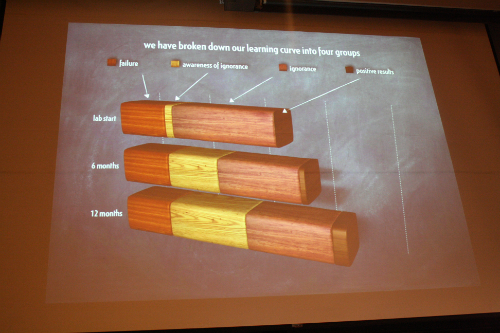 Ultimately Chang compares the effect of what he's pursuing to experiencing art the MoMa. He hopes to discover ideas that are so seemingly mundane and obvious that they will force others to exclaim "I could have done that!" Fermentation, miso, and soy sauce have been around for centuries, yet so far, the practices and rituals around it have been as regional as the fermenting microbes themselves. By bringing the scientific method into his kitchen, Chang cooks food that breaks down cultural differences by celebrating geographical ones.

The Harvard Science & Cooking lecture series continues on Monday, November 25th, with Nathan Myhrvold, author of Modernist Cuisine: The Art and Science of Cooking. Seating for the free event is first come, first served, and more details can be found on the Harvard website.
· All David Chang coverage on Eater [-E-]
· All Coverage of Harvard's Science & Cooking Lecture Series on Eater [-E-]