Top Chef NOLA Ep. 7: Hanging on by a Chili Thread

Share All sharing options for: Top Chef NOLA Ep. 7: Hanging on by a Chili Thread 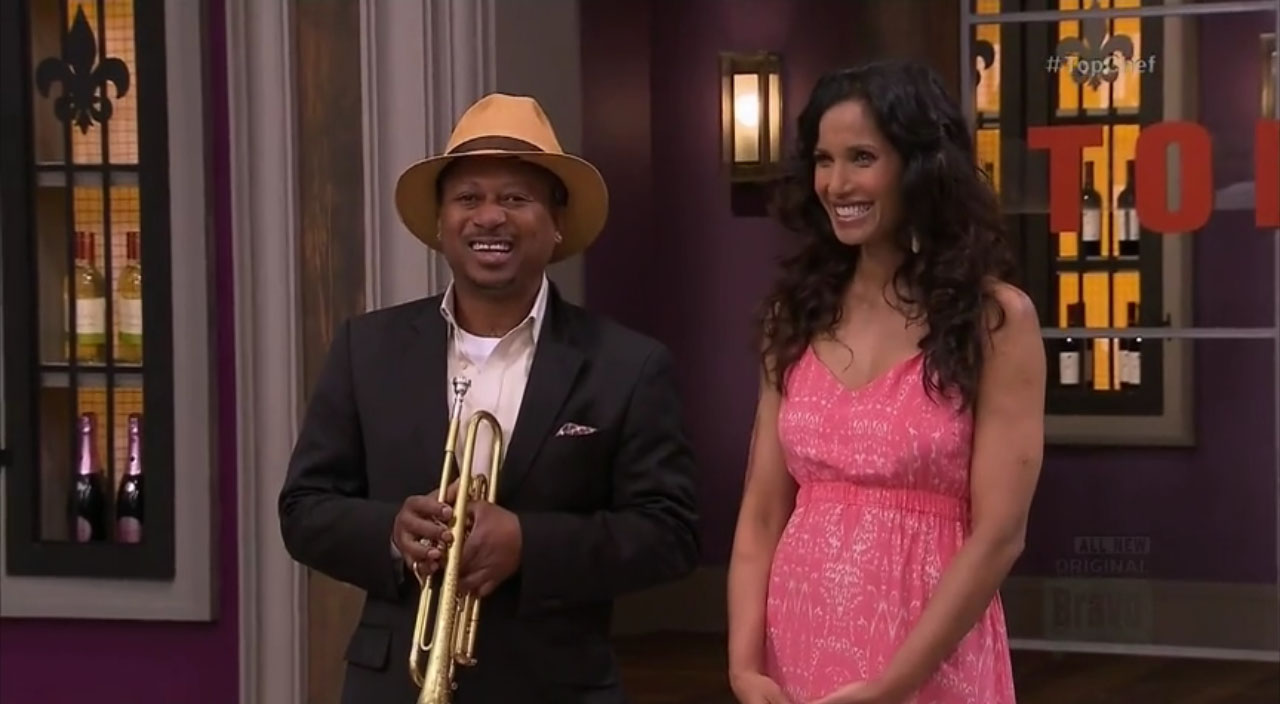 Well, it's officially Winter here in New York. Not like, "Oh it's the Winter solstice, let's all pretend we know what that means." It's more like, "Is that snow? You have to be fucking kidding me." It did apparently snow the other day, but I was still asleep when it happened because I'm not what you'd call a morning person (I don't hit my stride until around 3pm, and even then it's for like 25 minutes, max). Thankfully, Instagram exists, so all of the nightmares I follow on that made sure I didn't miss one uneventful second of it. Thank god for technology.

It is not winter on Top Chef, though. In fact, everyone looks as uncomfortable and sweaty as they have all season. Does New Orleans even have Winter, or does it just get humid and gray outside? 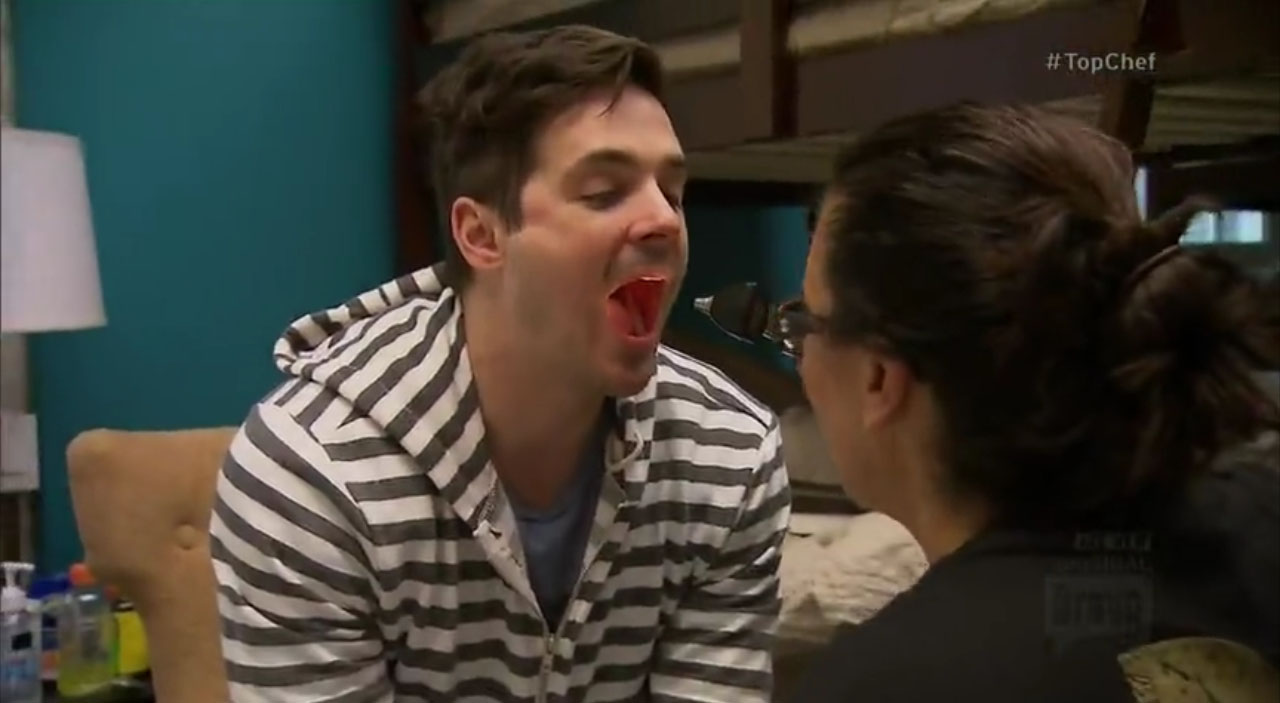 Whatever does happen down there has made Nick Elmi super sick. Sick enough that Bravo's physician shows up to the house. She tells him that he may have strep throat and is incredibly contagious. Then Nick pulls up the covers on the bottom bunk bed in the room he shares with several other people.

All of the chefs arrive in the kitchen for the Quickfire Challenge except for Nick, who is at home probably spreading strep around the house. They're greeted by Padma Lakshmi who introduces the guest judge, Kermit Ruffins, a musician in New Orleans. Kermit explains that a key to creating great music and great food is improvisation. Look, I'm a comedian, I know about improvisation because I have taken one whole introductory level of improv classes. Being able to improvise is incredibly difficult, especially when your instructor tells you to, "At least pretend to have real feelings while you're here in the class." I wonder if any of the chefs in this challenge were judged for being emotionless, too. 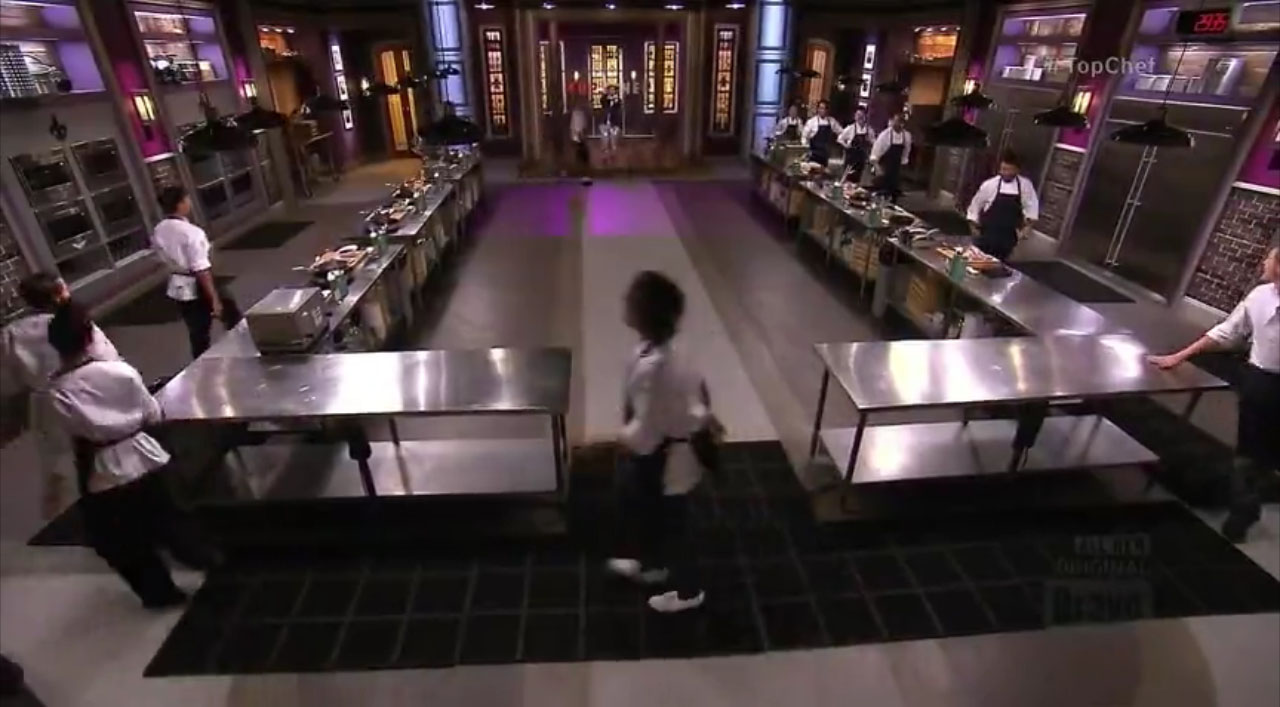 For the Quickfire, each chef's station is set up with some of Kermit's favorite ingredients. They will begin preparing dishes, but then when Kermit starts playing on that trumpet of his, they must walk around the room, musical chairs style, until he stops, and then pick up cooking at whatever station they landed on. This sounds like a nightmare to me. What's the fun in playing musical chairs without the risk of sitting on some dude's lap? 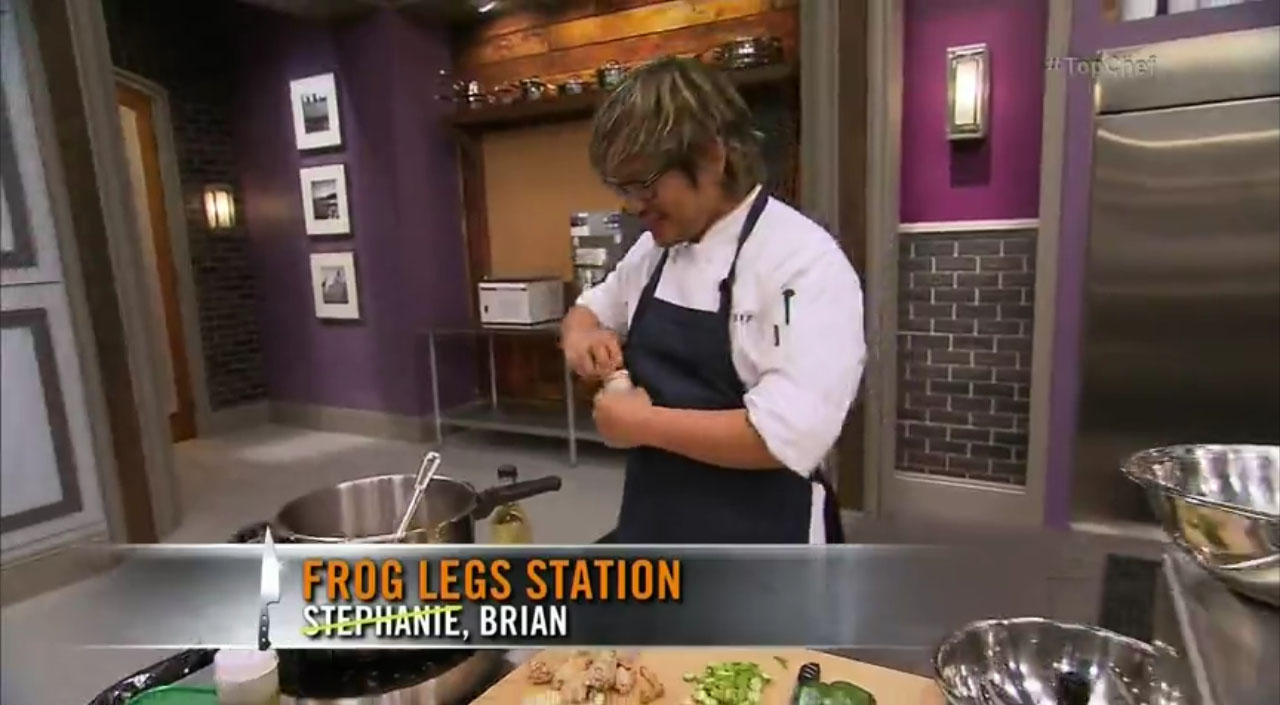 The chefs begin and Shirley Chung starts at a station with bacon and a microwave. While the other chefs are nervous about microwave cooking, Shirley is slightly more comfortable because her husband uses one all the time. Her type A personality makes me think her husband is essentially the helpless guy wearing a polo in every cleaning product commercial aimed at women. Brian Huskey lands at the frog legs station at one point and says that he didn't know what to do so he just started sauteeing vegetables. I hope this is what he does in any situation where he's confused. Like he's going over his finances and wonders, "Should I diversify my investment portfolio?" and then without having any clue how to decide, he just starts cooking up okra.

This challenge is a tough one, strategically. You could have a rough start, but end on a dish that has been well prepared by the previous chefs. Conversely, you could start out making something great but then end up with a total train wreck, aka Lindsay Lohan-ing it. It has all of the risk of a Yankee Swap holiday gift exchange. You're like, "Wait, I bought someone a $50 Amazon gift card and I'm walking away with a troll doll key chain? They don't even make these anymore — where did it even come from?" It doesn't really matter, because from what I can tell, most of the challenge is just the chefs awkwardly walk-dancing around the kitchen to trumpet music. 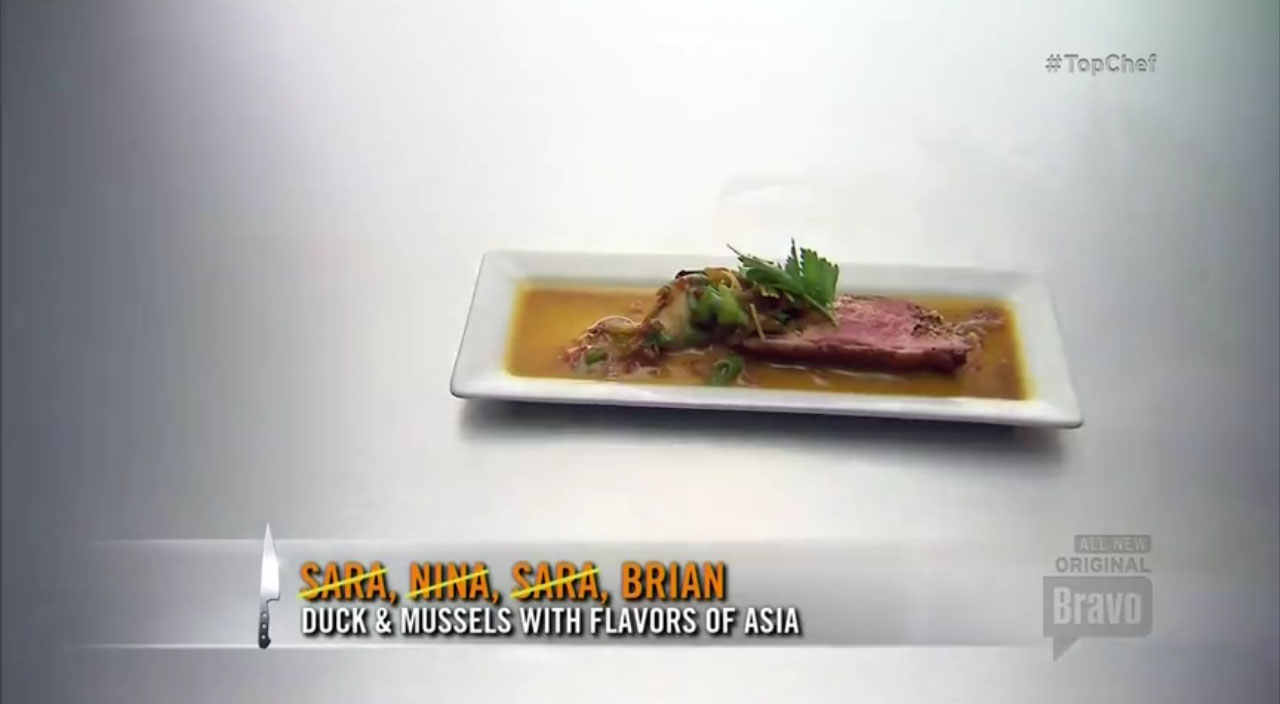 The music stops for the last time and some chefs luck out with where they land while others are in the weeds. Brian is happy with the duck and mussels that the chefs before him prepared and claims all he needs to do is clean it all up a little and "conceptualize a sexy plate up." Ugh, be right back, I need to go lie down because that phrase makes my head hurt worse than Sunday's hangover.

Okay, I'm back. And it looks like Brian's sexy plating (combined with the other chefs' actual cooking) won him the challenge and thus immunity from elimination. Kermit also liked Carlos Gaytan's red fish (mostly prepared by Nina Compton) and Patty Vega's rosemary roasted frog legs (mostly prepared by Louis Maldonado). Winning a challenge based on other people's work? This is just so unlike reality television. I'm shocked. 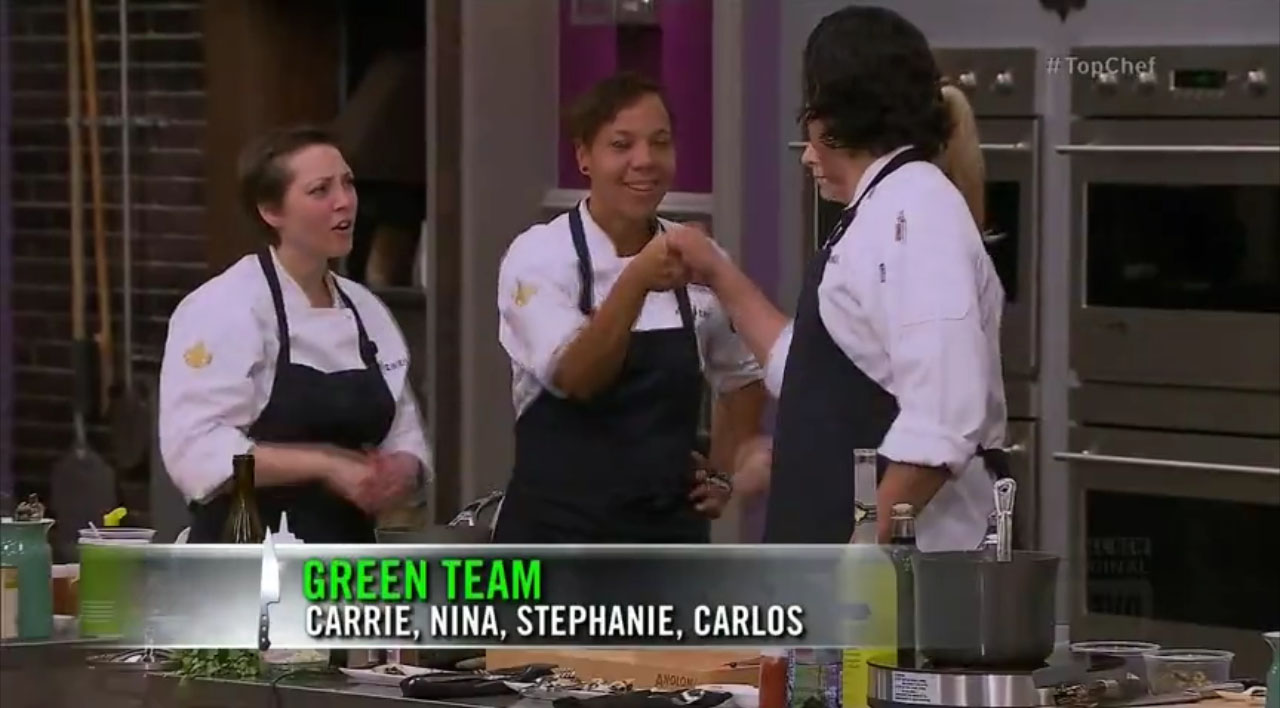 For the Elimination Challenge the chefs must prepare a potluck style meal to serve to Kermit's musician friends at his restaurant. They may choose their own teams of four for this challenge. I was all set to watch these grown, professional chefs get catty and personal about why they don't want to work with each other and have it sound like the girls bathroom in high school with everyone trash talking each other. Sadly, they were all mature adults who know who they prefer to work with and just kind of naturally split off into teams.

At Kermit's restaurant, he would play music all night and then take breaks and fire up his barbecue and cook for the audience. New Orleans jazz really feels like the only genre of music where you'd want to eat what the musicians can cook. You wouldn't want to be hanging out at some hipster indie rock concert and have the band be like, "Hey are you guys hungry? Well here's some cigarette butts and the crumbs from our triangle player's package of seaweed crisps!" But with live jazz, it just seems like it would probably be okay.

The chefs start planning their potluck menus. The gray team is Travis Masar, Brian, Patty, and Nick, who is on the phone through this part of the challenge since he's sick and back at the house. Travis refers to him as Mr. Quarantine. Travis stays on the phone with Nick while he's buying the fish for one of the dishes. Regarding a branzini, Nick tells Travis to touch it and smell it. While I completely understand wanting to do that to a piece of fish before you buy it to cook a possibly career-changing dish, if I was walking through Whole Foods and saw someone sniffing and feeling a big dead fish I would turn around, put down the salad that I had already eaten half of while walking around, and get the hell out of there. 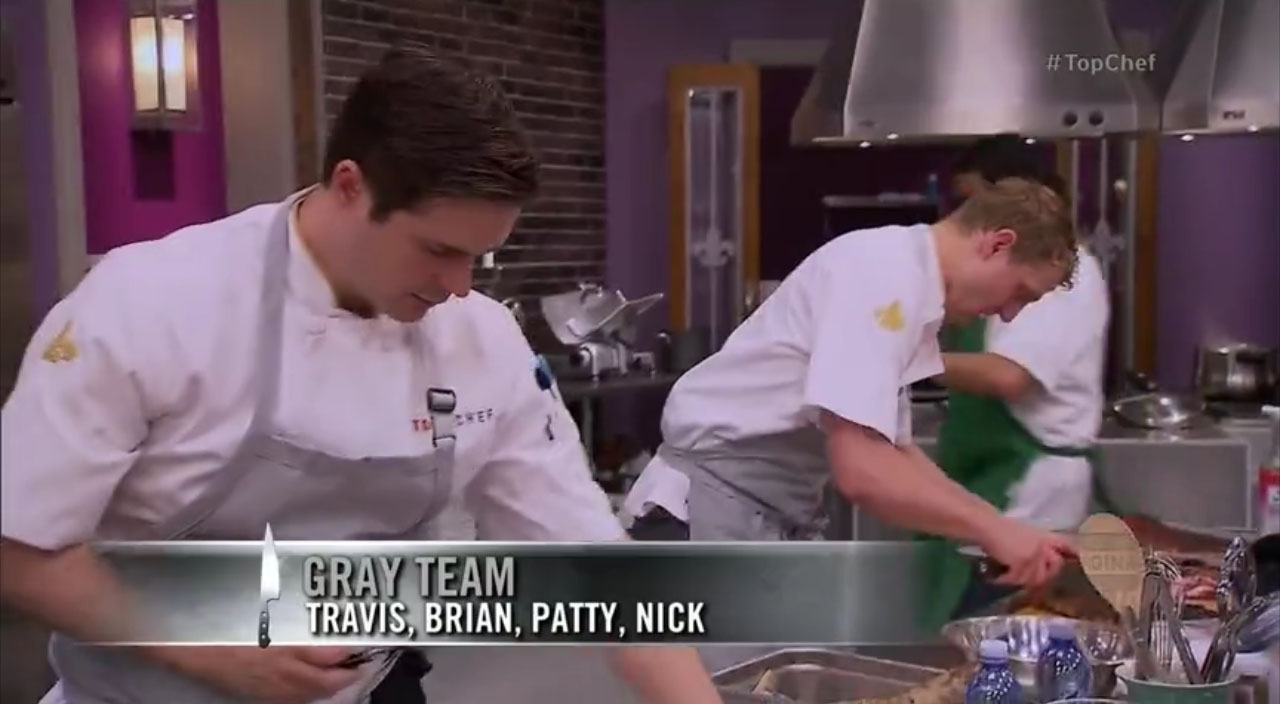 The next day Nick decides to take on most of the work for his team, probably because he doesn't really trust any of them to do it as well as he can. Carrie Mashaney is on the green team with Stephanie Cmar, Nina, and Carlos. Being from the Midwest and apparently having attended many potluck dinners, she says that they need to have a dessert and decides to make tiramisu to cap off their Italian-themed meal. 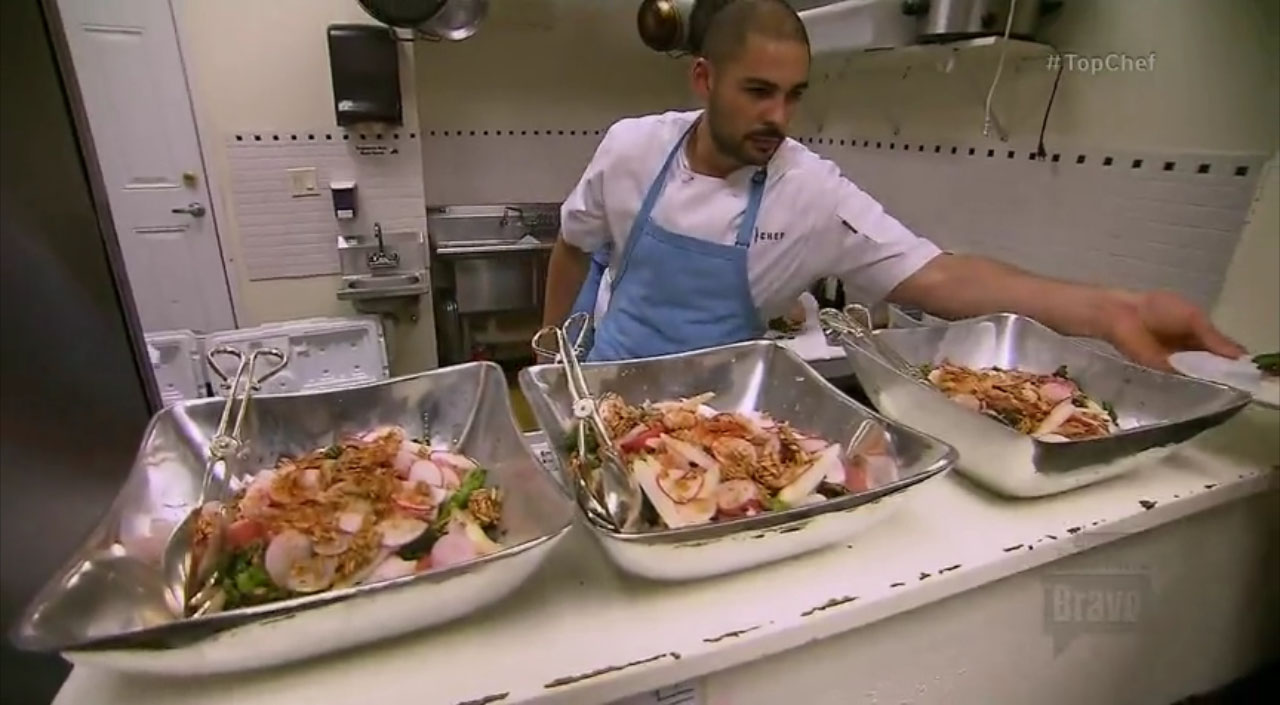 On the blue team, Justin Devillier makes shrimp and grits, which seem to go over fairly well, if not for being a little underseasoned. The guests and judges love Louis's charred broccolini and pickled radishes, and are also pleased with Sara Johannes and Shirley's beef. After the first team serves their dishes, Kermit hops on the drums and just kind of taps on the cymbals long enough for it to be a disturbance but not long enough that he actually plays a song of any kind. Then the eating resumes like it never happened and I wonder if I'm having some kind of radiator-heat-induced hallucination.

The gray team serves their dishes, though at the last minute Patty neglects to put the chili threads on the watermelon salad. Guests love the team's fried chicken, but find the fish to be bland. Kermit introduces the judges to his musician friends and refers to one of them as, "The last cat with a Jheri curl." I heard this and of course pictured an actual cat with a Jheri curl because I am a 29 year old Jewish woman in Manhattan and the only cats I know are the ones in internet videos or the ones that I will eventually own and be eaten by when I die alone in my apartment choking on a piece of Dove chocolate. 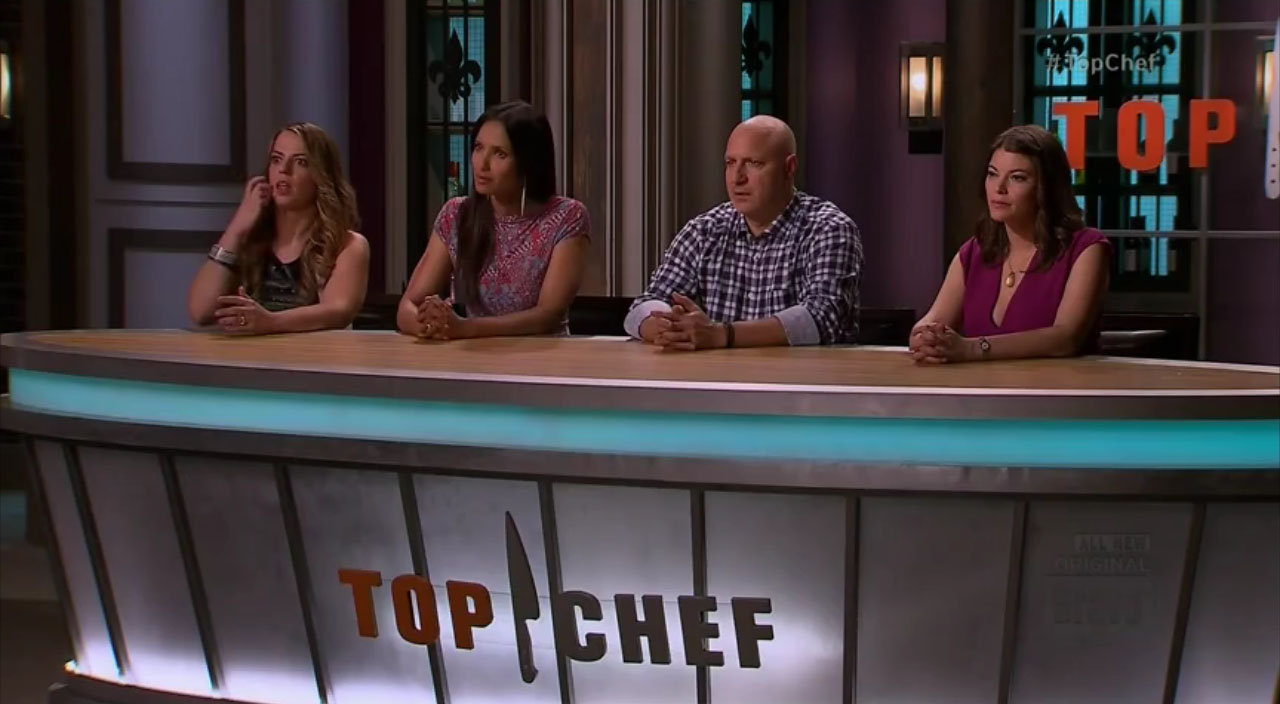 Back at Judges' Table, the chefs have to watch Tom Colicchio, Gail Simmons, Padma, and guest judge Sue Zemanick talk about the highs and lows of the evening. Usually this chat gives the chefs at least some idea who is at the top and the bottom, but not tonight. This conversation left them even more confused than the first time someone tried to explain the point of engagement photos to me. 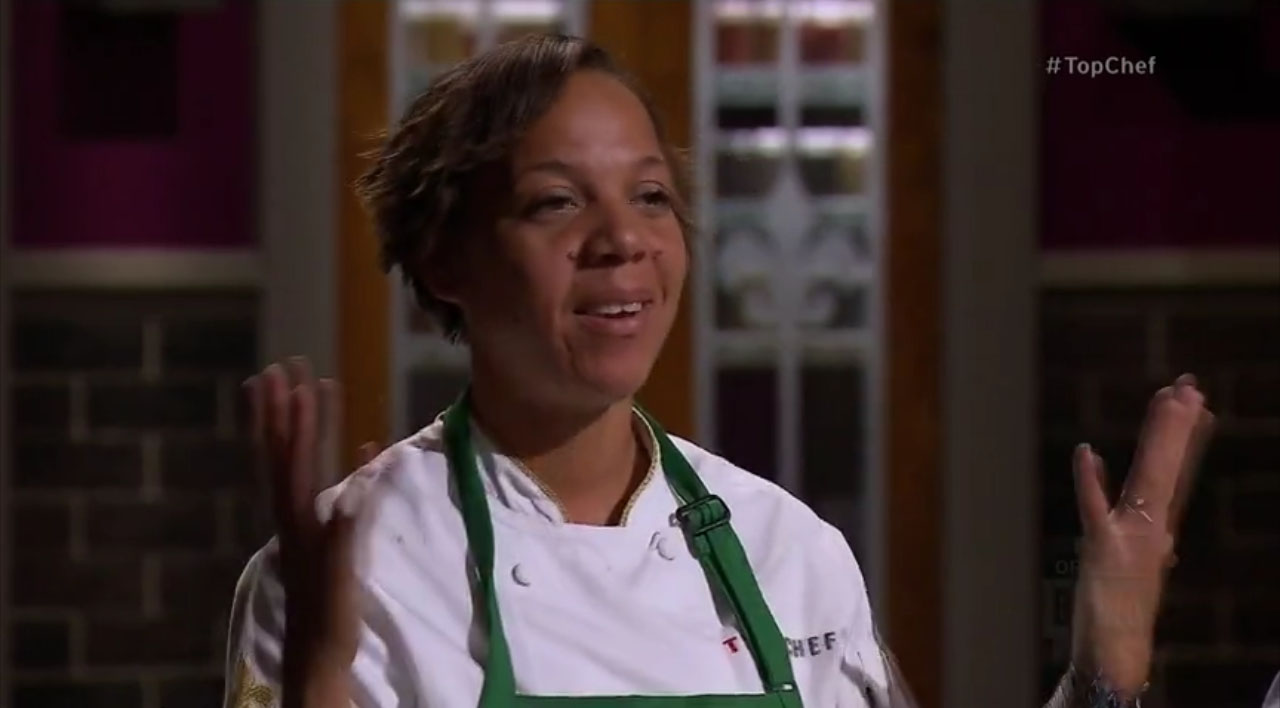 The green team is on top, with Stephanie winning for her crispy artichokes and aioli with fried capers. Tom asks Nina who taught her how to make gnocchi and she answers, "I don't know! It just happened!" which is the worst way to explain how you developed an enviable skill. It's no different than when an actress like Jessica Alba is interviewed by a magazine about how she stays thin and she says, "I don't know, I still eat burgers and fries and I honestly don't go to the gym much." Just shut up. 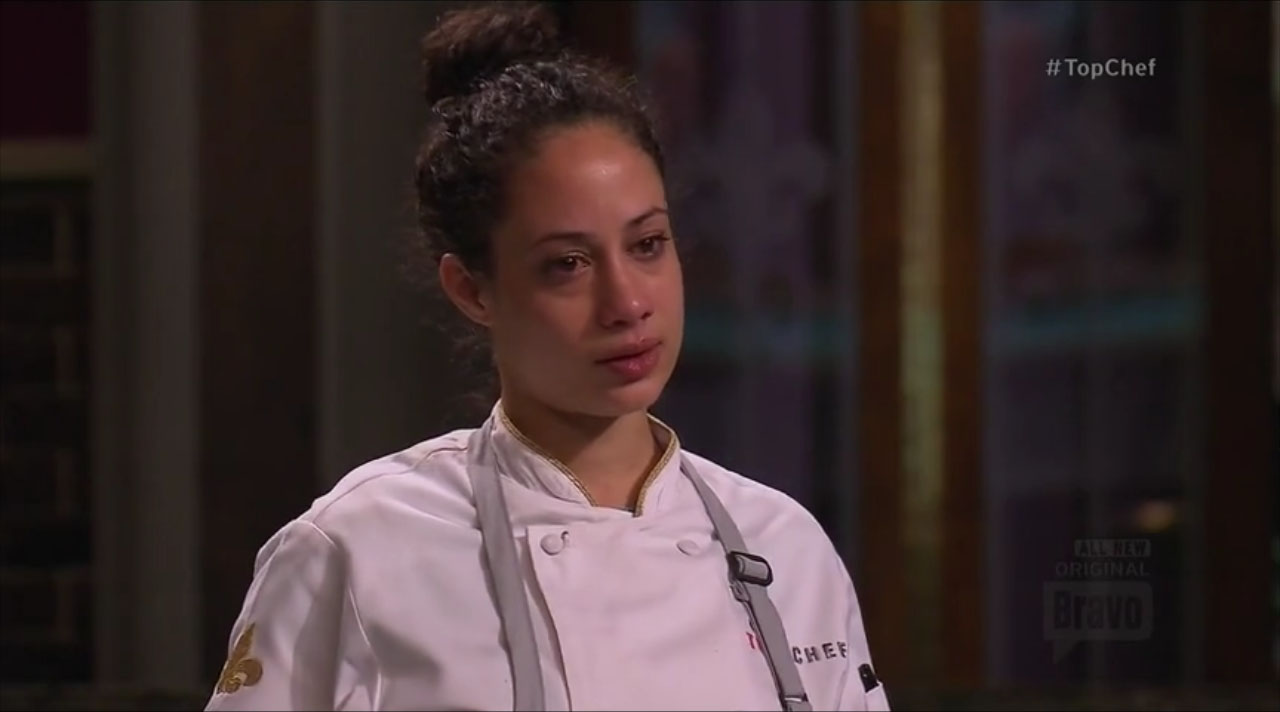 Guys, I'd love to stay and chat more, but John Besh and Curtis Stone are on Watch What Happens Live, so the rest of my night is, like, really booked up watching that on repeat.