Wylie Dufresne at Harvard: Meat Glue and the 'Dirty Little Secrets of Chefs'

Share All sharing options for: Wylie Dufresne at Harvard: Meat Glue and the 'Dirty Little Secrets of Chefs'

Harvard University's third annual Science & Cooking public lecture series brings chefs from around the world to lecture on the intersection of science and cooking. And Eater Boston editor Rachel Leah Blumenthal is on the scene. This week: Wylie Dufresne (of New York City's wd~50 and Alder) and Ted Russin of the Culinary Institute of America. 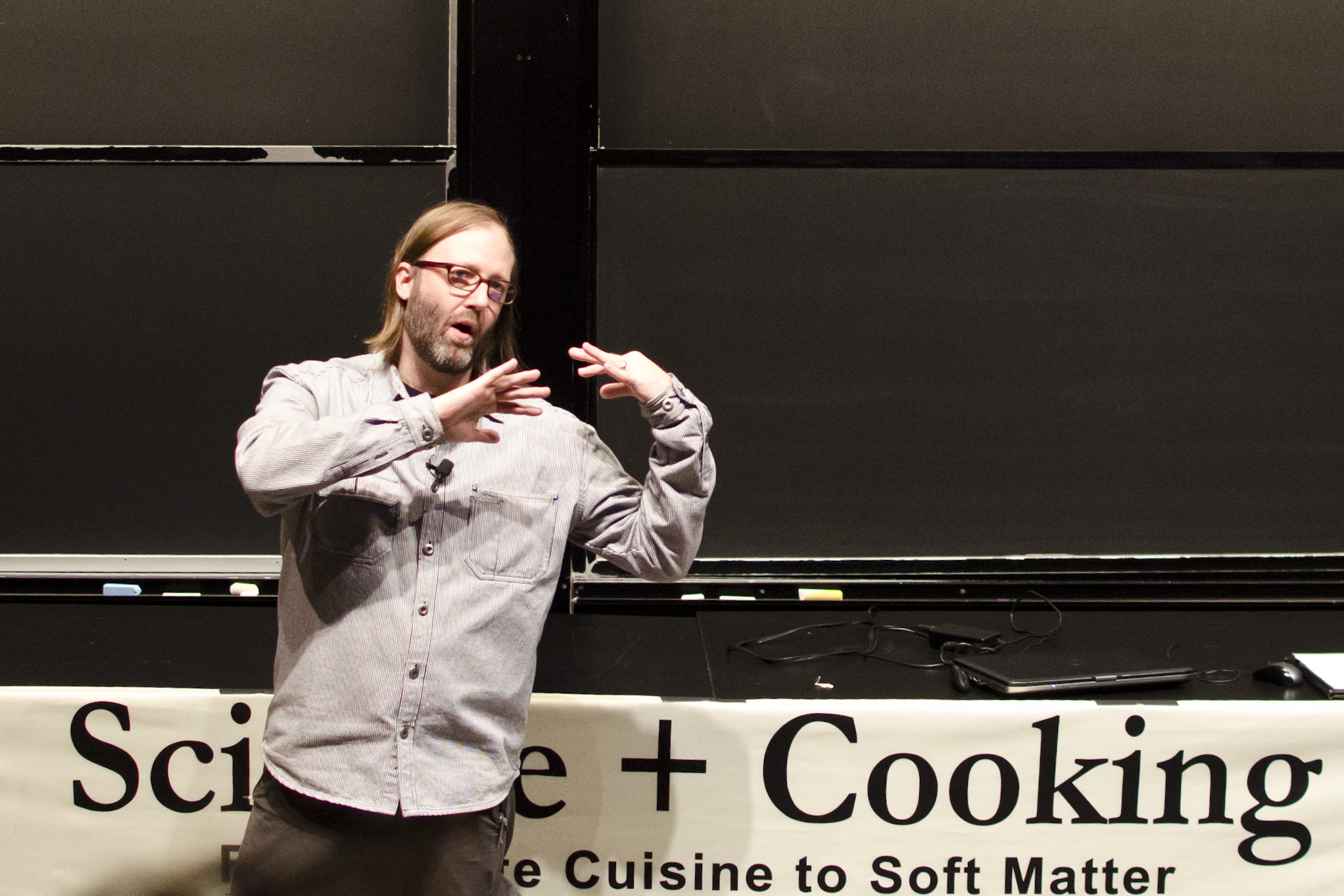 Last night Harvard's Science & Cooking lecture series continued with a talk that brought to mind automobiles more than food: "Catalytic Conversion: Enzymes in the Kitchen." It was really just one enzyme that starred in the lecture, though. Transglutaminase, more commonly known as "meat glue," which does pretty much exactly what its name suggests. Picture this: you've got a few thin scraps of skirt steak hanging around. With a little sprinkle of meat glue, which comes in a convenient powdered form, those scraps can be fused together over the course of about 24 hours, resulting in a beautiful filet with nearly invisible seams between the former scraps. Chef Wylie Dufresne has been pushing the sticky boundaries of meat glue possibilities at wd~50 practically since the restaurant's inception in 2003, around when British chef Heston Blumenthal introduced him to the enzyme.

The "dirty little secret of chefs," he revealed, is that "it's fair to say we don't know what we're doing."

A drive to learn more about cooking and take an in-depth exploration into its scientific side contributed to the creation of wd~50 and Dufresne's foray into things like meat glue. (It was also opened "so we could take your money and give you food in return," joked Dufresne.) It wasn't just that Dufresne wanted to continue his own culinary education: he wanted to provide everyone, from the restaurant employees to the diners, with the same opportunity. After studying at the French Culinary Institute and working in several kitchens, including multiple Jean-Georges Vongerichten properties, Dufresne realized how much he didn't understand. "I knew how to cook, but I didn't know why to cook. I didn't know what I was doing," he said. The "dirty little secret of chefs," he revealed, is that "it's fair to say we don't know what we're doing."

"Clarence Birdseye knew more about frozen foods in 1919 than we do today," Dufresne said, "and he's long gone. Well, he lives on in aisle six." Dufresne wanted to create a place to begin asking questions that sound basic at face value: "What is cooking? Why do we do these things?" The answers reside in the realm of science, and he sensed that others were seeking those same answers; the time was ripe for chefs to wander into chemistry and biology, figuring out how to use science to better understand cooking. They needed to move outside of their own discipline to figure things out.

"There will never be a right or wrong way to cook something," said Dufresne. "But there will always be a more informed way."

Dufresne cites critics who have said his science-oriented approach — and that of similarly-minded chefs — takes the fun or the soul out of cooking. "There will never be a right or wrong way to cook something," said Dufresne. "But there will always be a more informed way." In other words, science isn't the enemy.

To deliver last night's lecture, Dufresne teamed up with longtime collaborator Ted Russin, a food scientist who is currently the director of the Culinary Institute of America's consulting branch. "What we do is solve people's food problems," explained Russin, who likes to think that the CIA is a consulting group that happens to have a school on the side rather than the other way around. To set the stage for meat glue, Russin reviewed the basics of enzymes, which speed up reactions by decreasing the activation energy — the amount of energy a chemical reaction needs in order to occur. The physical form of a particular enzyme enables it to make the environment of a particular reaction more favorable for that reaction to occur. Meat glue specifically facilitates the reaction between two amino acids that appear in many proteins — glutamine and lysine — creating a very strong covalent bond between the two ("gluing" them together). 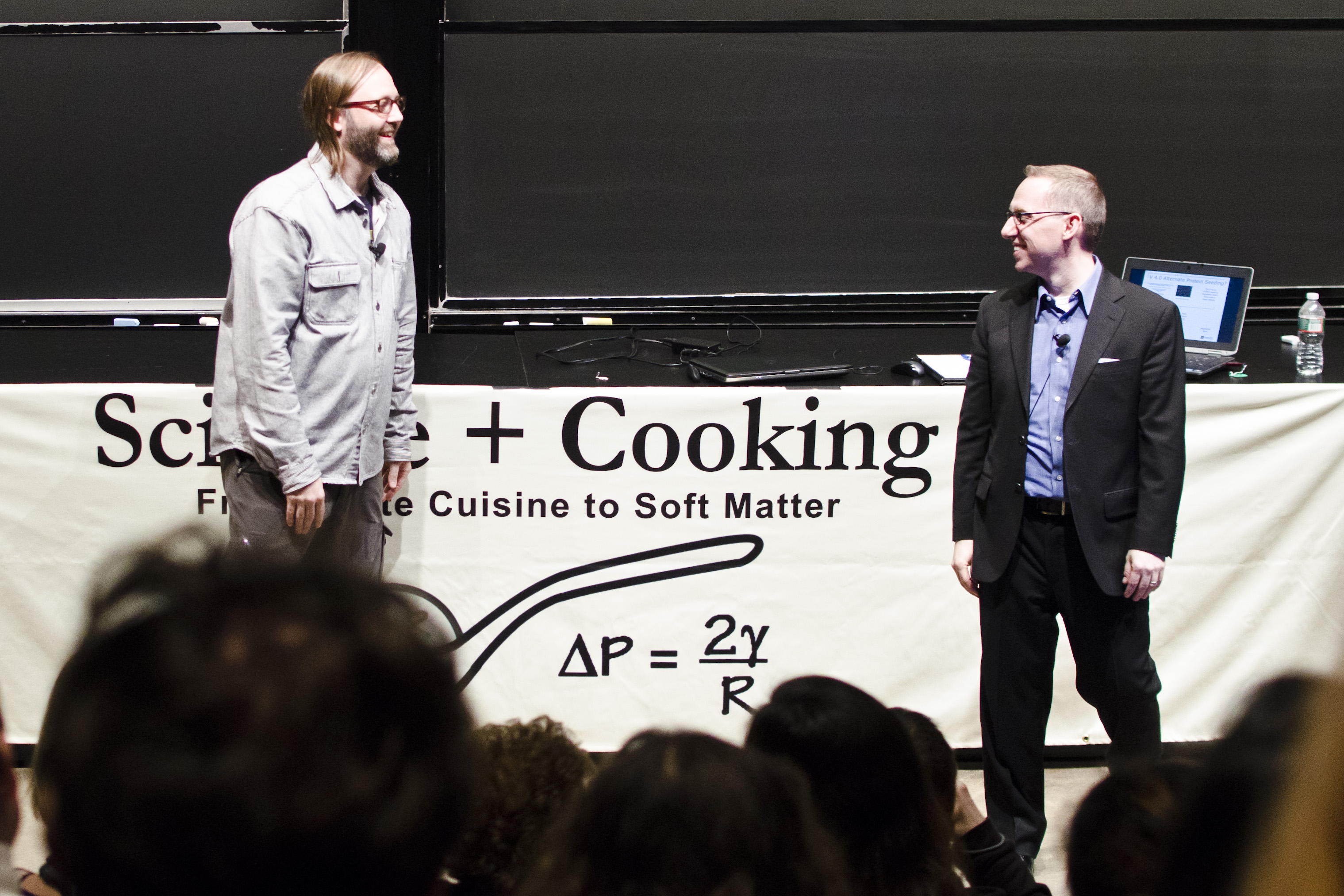 Plenty of other enzymes can also be found in food, impacting taste, color, and texture. Polyphenol oxidase, for example, is responsible for the browning of fruits when exposed to oxygen, and on the more desirable side, the darkening of tea leaves and cocoa. Rennin, also called chymosin, plays a huge role in cheese-making, and papain, found in papayas, acts as a tenderizer, breaking down meat fibers.

But it's meat glue that allows for infinite creativity.

But it's meat glue that allows for infinite creativity, allowing chefs to not only combines scraps together into clean cuts of meat but also to break down and reform things in new ways. It might sound like the work of mad scientists, but modern science isn't to thank (or blame) for this. "This is not a new idea," said Dufresne. Meat glue itself is "a relatively new ingredient," but restructuring foods in order to use cuts of meat in unusual ways has been done forever.

Dufresne's shrimp spaghetti is a great example of the creativity allowed by meat glue. No, it's not a simple spaghetti topped with shrimp — the noodles themselves are made of shrimp, which is blended up into a homogeneous mixture with meat glue, cooked with an oil made from the shrimp heads and shells (to add flavor), and extruded into a 55-degree Celsius water bath. "It's the ultimate gluten-free noodle," observed Russin. 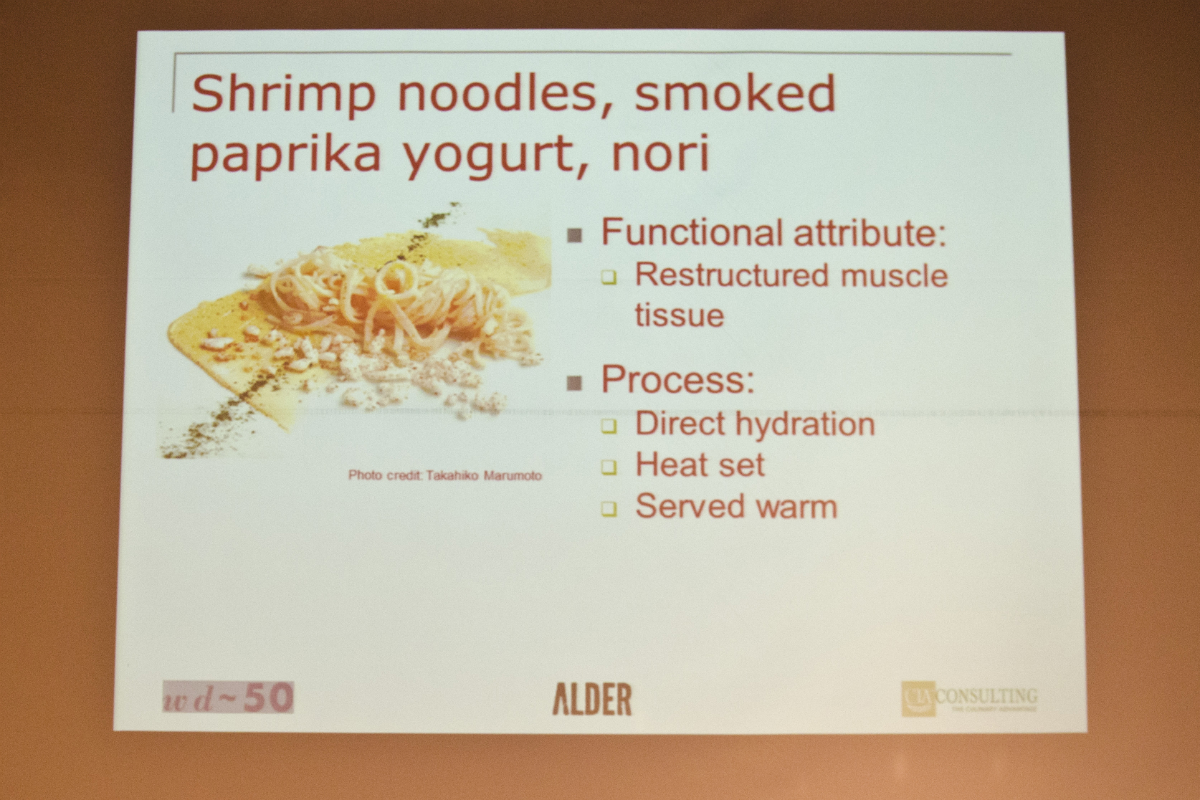 Temperature is extremely important when working with enzymes: too cold, and there won't be enough energy for the reaction, but too hot, and you might kill the enzyme. In the case of the shrimp noodles (which have an "awesome" texture, Dufresne noted, in response to an audience question), he keeps both the shrimp and the food processor bowl in the freezer before beginning the process, because the use of the food processor adds a lot of mechanical shear, which produces heat. Starting with frozen materials helps keep the temperature in the right place.

Temperature isn't the only factor that comes into play when attempting to maximize an enzyme's activity. Time, pH level, and the concentration of enzymes also have to be carefully controlled, as well as the amount of physical interaction between the enzyme and the reactants. Meat glue reactions take about 24 hours to reach completion, although it's possible to accelerate the process by tweaking the conditions. The best pH range is between 6 and 7, and the best temperature is between 45 and 55 degrees Celsius, although anything from 0 to 65 degrees will generally work.

Other possibilities that have made appearances on Dufresne's menus include pillows of carrots and peanut butter noodles.

If foods don't have their own glutamine and lysine, it's still possible to get results with meat glue — you just need to add some gelatin to the mix, which has both of those necessary amino acids. If you seed barley, for example, with some gelatin stock, you can get bonded chunks of barley, and its bonds can even withstand the heat of a blowtorch. Torched chunks of slightly gelatinous barley might taste better than they sound, but the dish is no longer on wd~50's menu, so it'll have to live on in your imagination. Other possibilities that have made appearances on Dufresne's menus include pillows of carrots and peanut butter noodles.

Since gelatin is animal-based, the search is on for a plant-based equivalent that will work appropriately. From a scientific standpoint, Dufresne is interested in solving this mystery, but not because it'd be useful for non-meat eaters. "I have no interest in vegetarians whatsoever," he said. "Zero. Less than zero. But I'm very intrigued by this. I'd toss it in chicken stock." (The wd~50 website does promise that it can accommodate vegetarians — but not vegans.)

One audience member wondered if meat glue has applications outside of food, in surgery, for example. And it does. It's useful for field dressings, and Dufresne's cooks "have been known to use it on cuts," he said. "But you didn't hear it from me. I recommend Krazy Glue." 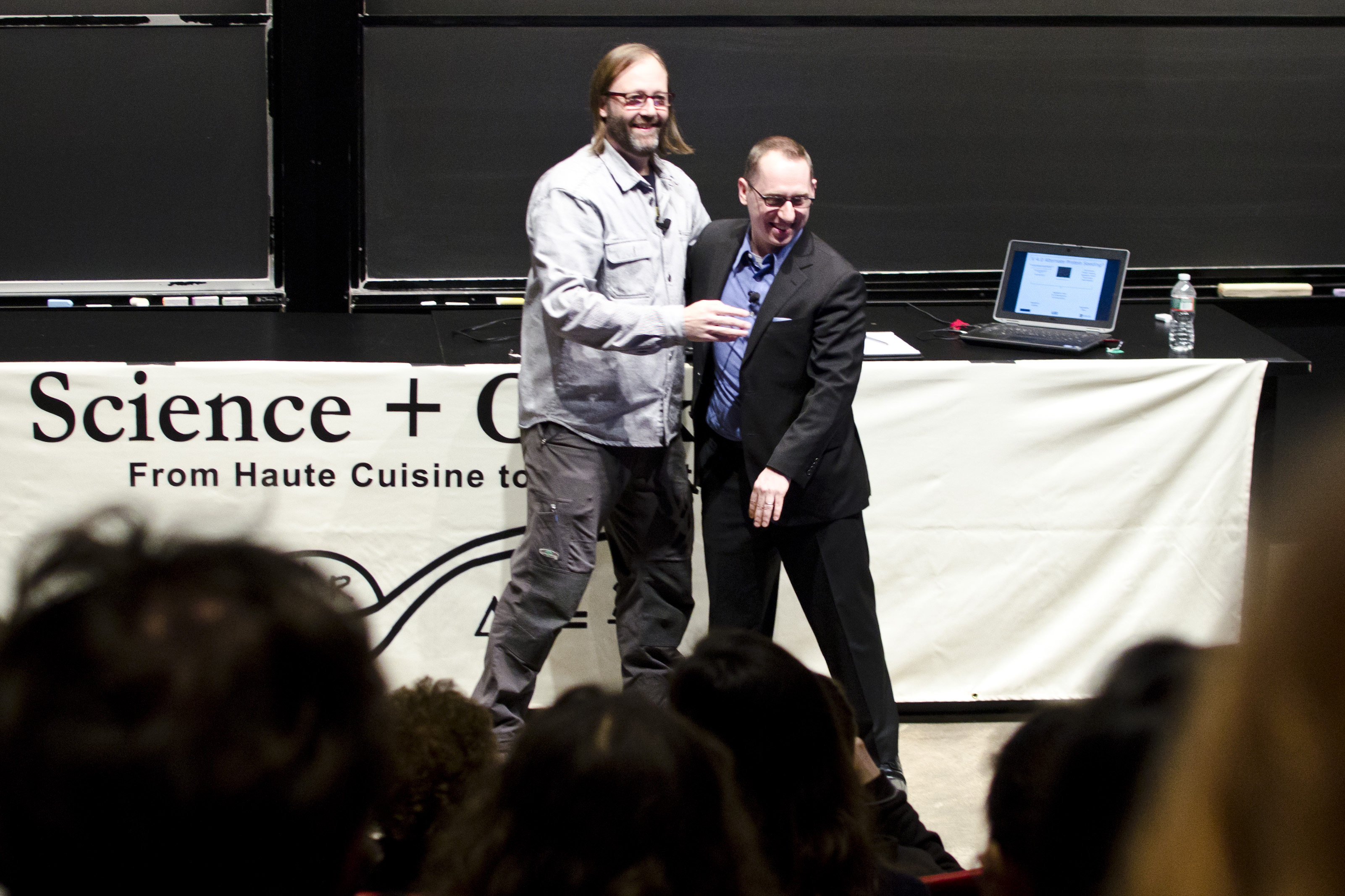 The Harvard Science & Cooking lecture series continues on Monday, November 18th, with momofuku's David Chang speaking about fermentation. Seating for the free event is first come, first served, and more details can be found on the Harvard website.