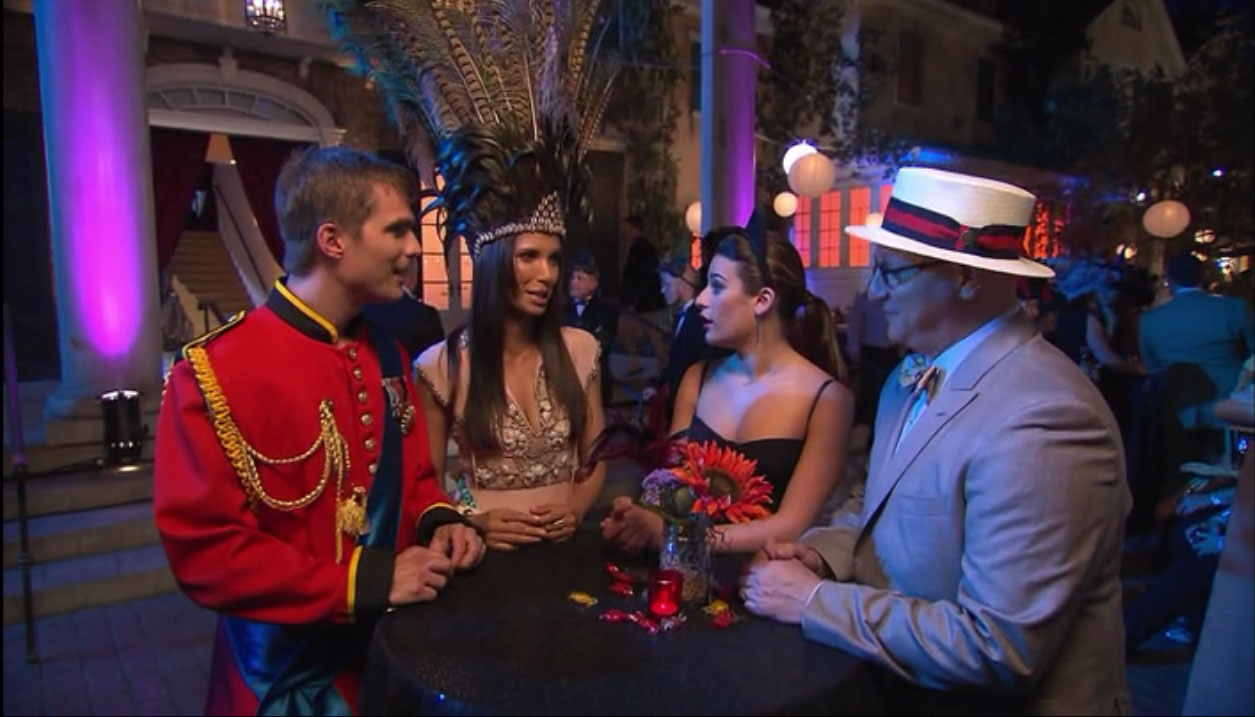 This episode starts already missing one of the key ingredients of Halloween: the hot girl. Janine Booth is gone and Sarah Johannes is kicking herself for messing up an Asian-themed challenge which resulted in Janine's elimination. I get it Sarah, I've messed up at what I should be good at before, too. I'm Jewish and just last week I bought a dress full-priced at Bloomingdale's. All we can do is recognize our mistakes and move on. 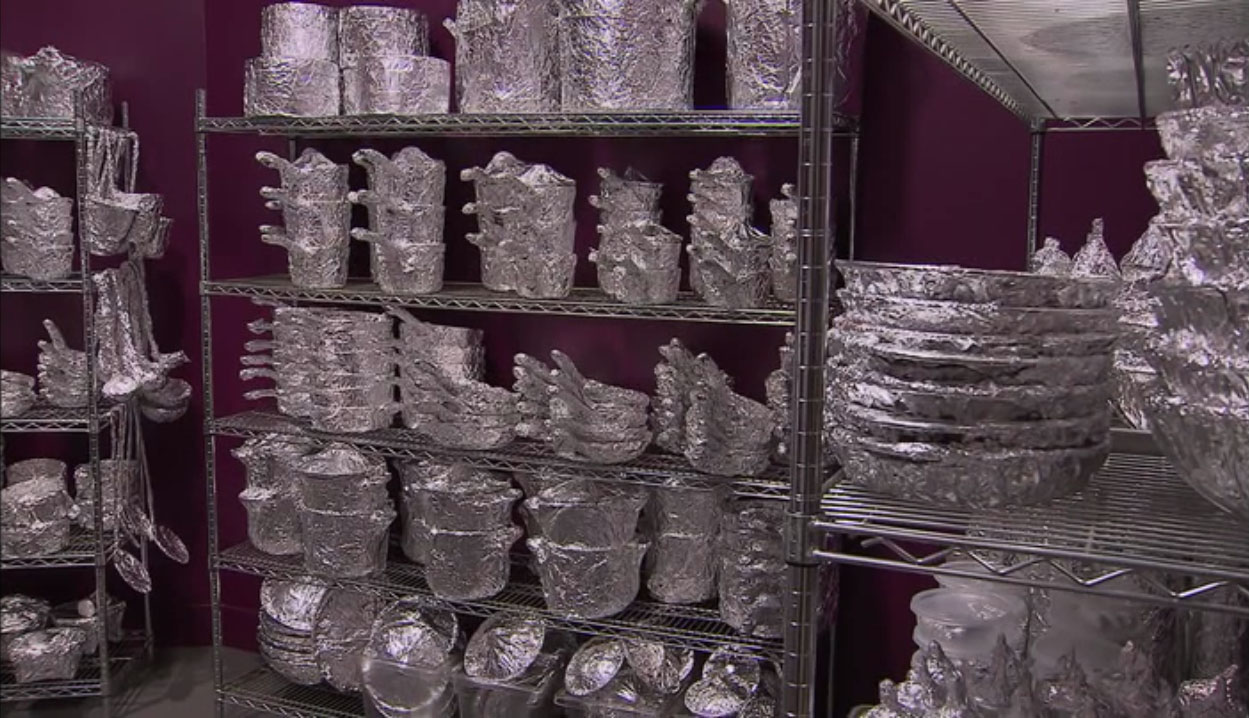 The chefs arrive in the kitchen for the Quickfire Challenge only to find everything they can see is wrapped in aluminum foil. Padma Lakshmi and Gail Simmons enter to explain the task at hand. Padma tells the chefs that, "Real moms are using Reynolds Wrap." Having a child now, Padma knows about being a mother, though she's a super wealthy, incredibly hot mother. In fact, the only time Padma seems like a "real mom" is in the Top Chef promo reel when she dances like she's at her son's Bar Mitzvah.

Padma and Gail's mothers enter as the judges for the Quickfire. With everything in the kitchen wrapped in foil like it's the set of a culinary rave, Padma explains that Mama Lakshmi and Mama Simmons will be "shopping" for items that the two teams of chefs will have to use, in their entirety, to create three dishes each. Everything from proteins to vegetables to equipment is wrapped in foil, and the chefs will have to wait to unwrap them to see what they are working with. Sure, this is a surprise for some things: a beef tenderloin and a piece of salmon probably don't look that different wrapped up. Some items, however, will be at least somewhat obvious for the moms during their mystery shopping spree. A frying pan covered in foil is like a guy in an Ed Hardy shirt: I know what I'm getting here. 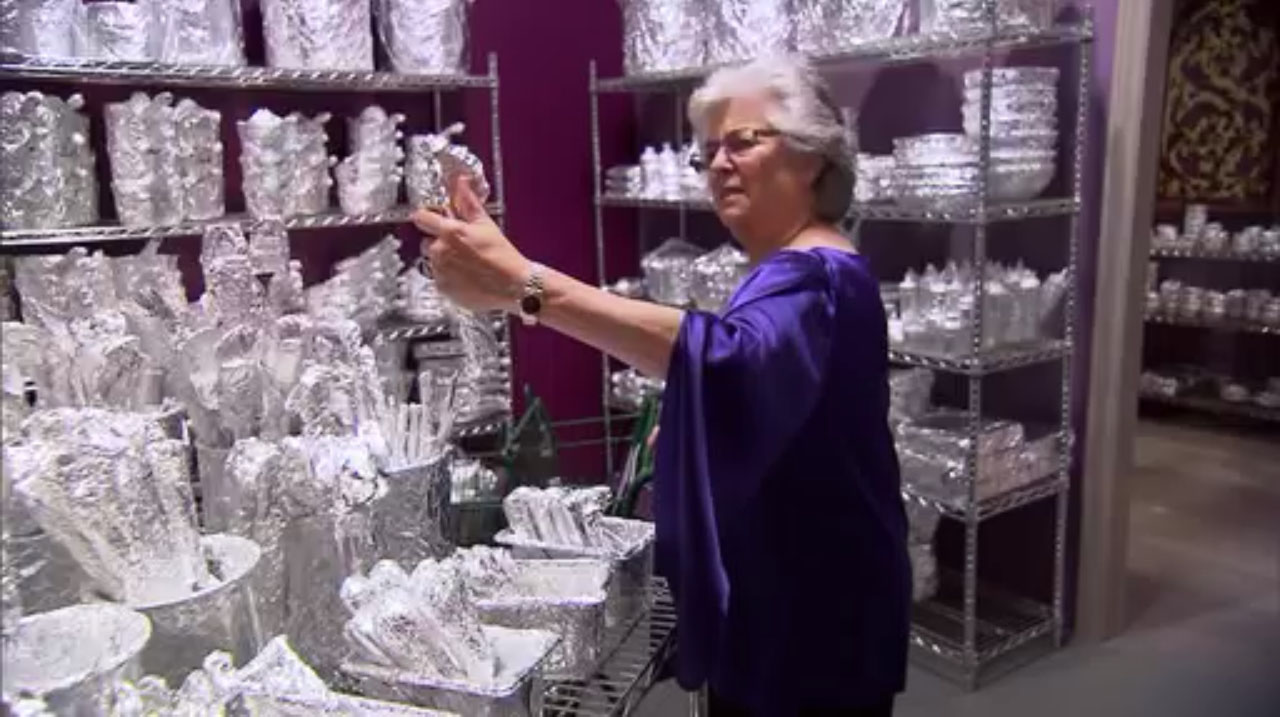 The moms rush around the kitchen to get their items and then the chefs have thirty minutes to prepare dishes. While they are cooking, Padma, Gail, and their moms walk off camera. If they are anything like my mother and me, they are going to talk about their professional and romantic shortcomings and probably suggest law school one more time. 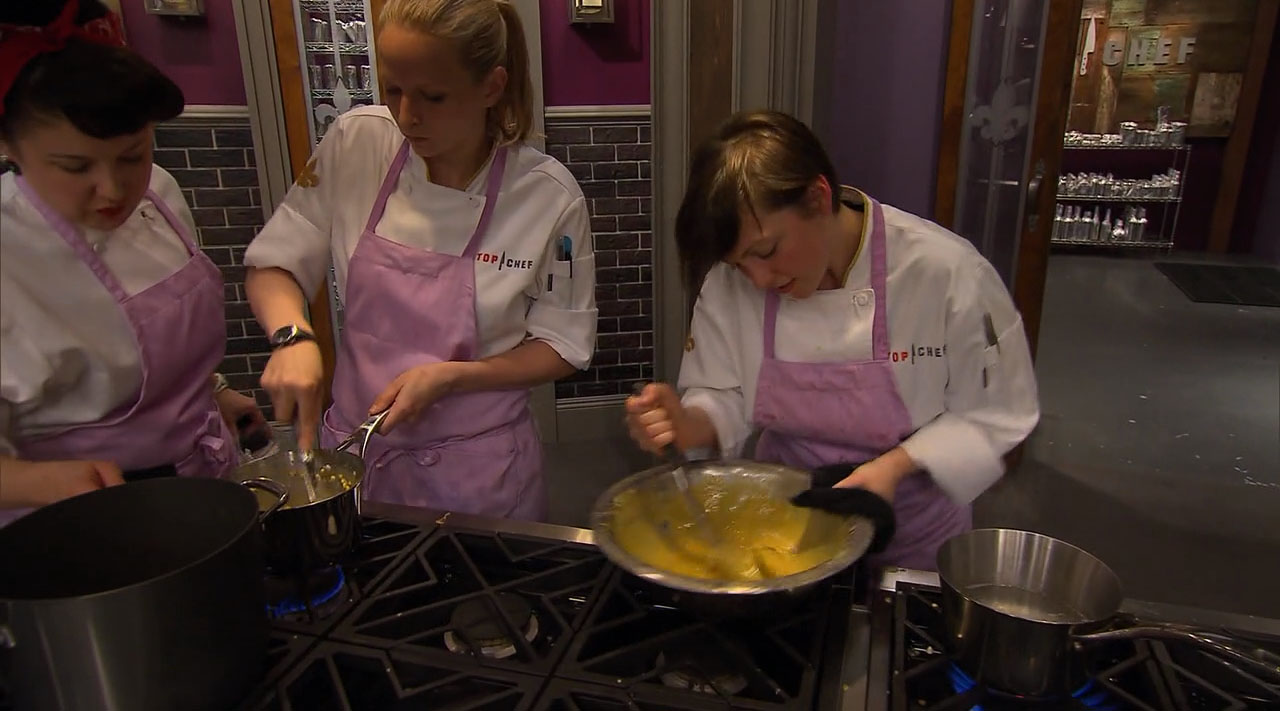 Forced to cook with every single ingredient they are given, chefs on each of the two teams come up with surprisingly harmonious dishes. Team Lakshmi served clams in coconut cream sauce, snapper and branzino en papillote, and a soup called "something for your mama" which is a bizarre mix of beans, chiles, carrots, okra, and cherry chutney. Team Simmons also created a snapper en papillote as well as lamb and fonduta and a compressed burrata with pickled apples and balsamic sabayon. Carrie Mashaney took on making the sabayon sans whisk, claiming, "I thought my arm was going to fall off" after she finished vigorously mixing it. Once again I have a line I can use unchanged in my Top Chef erotic fan fiction. 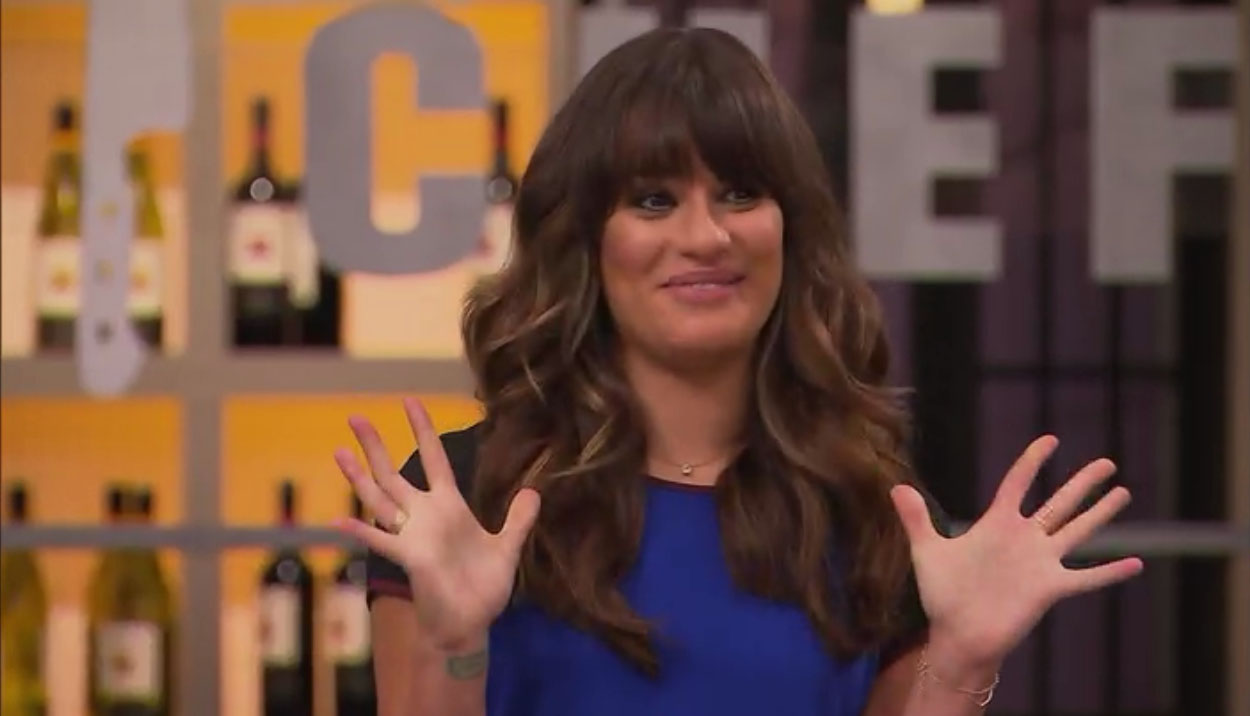 To explain the Elimination Challenge, Padma welcomes guest judge for the episode, Glee's Lea Michele. She tells the chefs she is hosting a Halloween costume party, and that for their challenge the chefs will be catering that party in teams of two each responsible for two dishes.

In my adult years (which are strictly based on my chronological age and have nothing to do with actual maturity considering I still don't have a 401K or "a husband" according to my mother), I have not been much of a Halloween fan. During college, however, I loved the holiday. The best costume of my life was my sophomore year when my friends and I dressed as the fictional boy band of hunters called *N Season and wore an appropriate mix of camouflage sweatpants, fingerless gloves, and tinted aviator sunglasses.

Michael Sichel takes the opportunity to reflect on a past Halloween where he tells us he "was a pregnant nun once and got laid," a fact which now haunts my nightmares more than any scary movie I have ever seen. He is paired up with Nina Compton for the challenge, something he is thrilled by and she is not happy about. Nina has consistently been at the top of challenges and Michael has barely proven himself capable of anything beyond leading a bus tour of New Orleans. 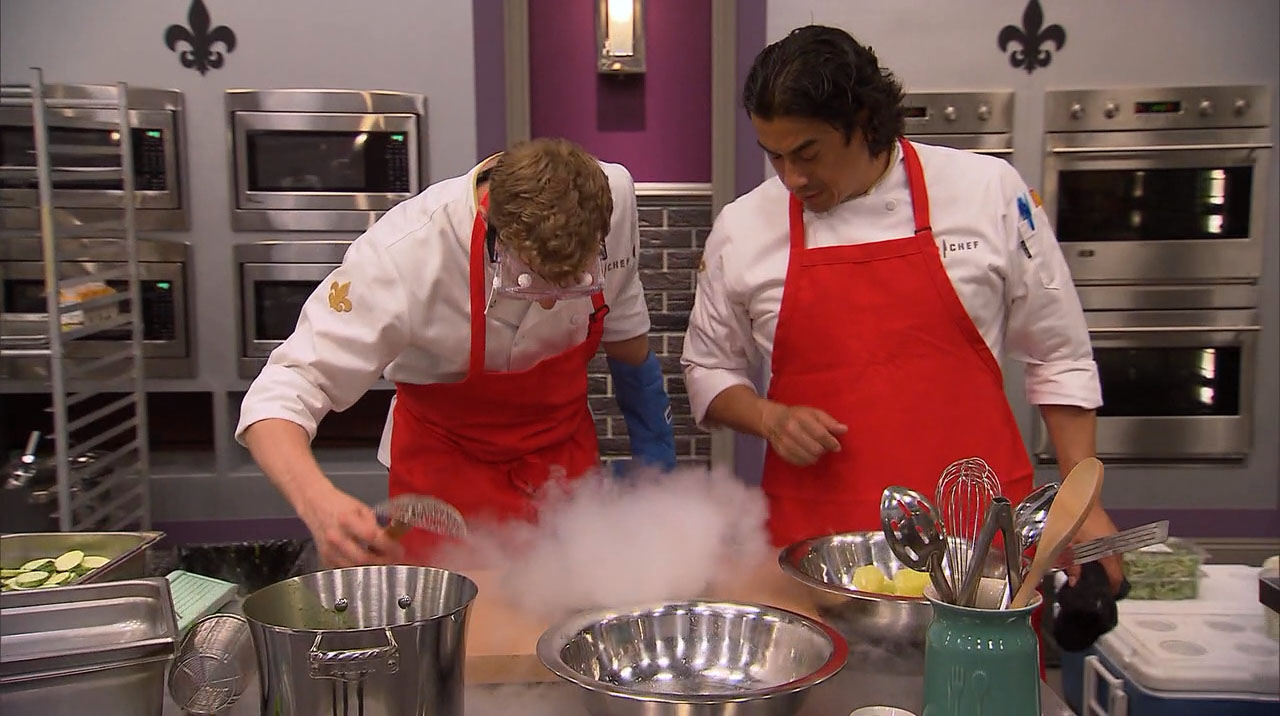 The teams start planning their dishes: Louis Maldonado is going to make a "severed finger" with vegetarian ingredients, Travis Masar decides to use liquid nitrogen to give his dish a spooky factor, and Michael is running around yelling about "bloody eyes," continuing to find ways to be in my nightmares. Nick Elmi and Patty Vega listened to Lea go on and on about her love of cheese and decide to, "give her so much cheese she'll get sick of it," which Lea should totally understand, being an actress on Glee and all. 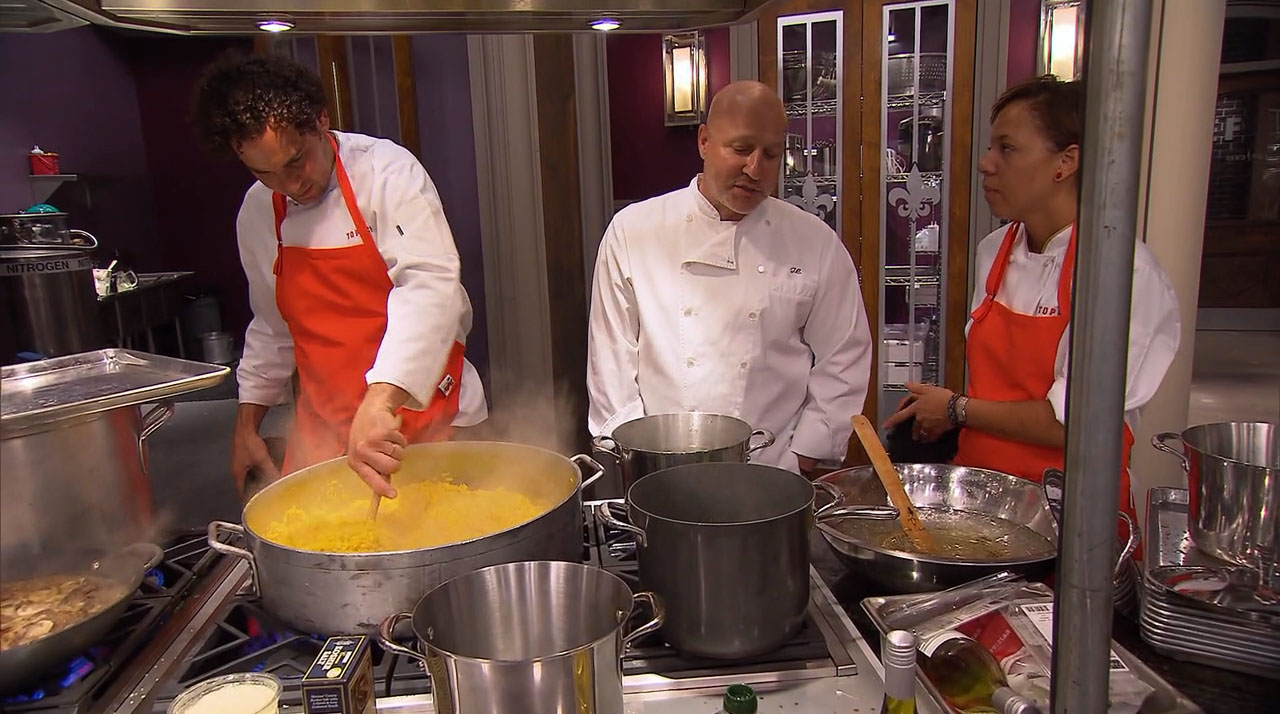 Judge Tom Colicchio visits the chefs back in the kitchen. In his trip from station to station he notices that there are at least three chefs preparing arancini for the challenge. Arancini in this challenge is like a Miley Cyrus costume at a Halloween party this year. You just think, "Ugh, this again? If I see one more of these things I'll pull my hair out." But at least these are fried risotto balls and not poor representations of an oversexed child star.

Bene Bartolotta and Brian Huskey decide to do two different salads. Perhaps they took being the green team too literally or maybe it's that they saw Lea and were like, "Oh, an actress, she must only like salad." Either way, they err on the side of healthy with their "Spooky Spa Salads." Whether the dishes are good or not, at this point I can't get the concept of a spooky spa out of my head and now every time I go for a massage I'm going to be afraid my happy ending (women can get them too!) is going to be from a ghost. 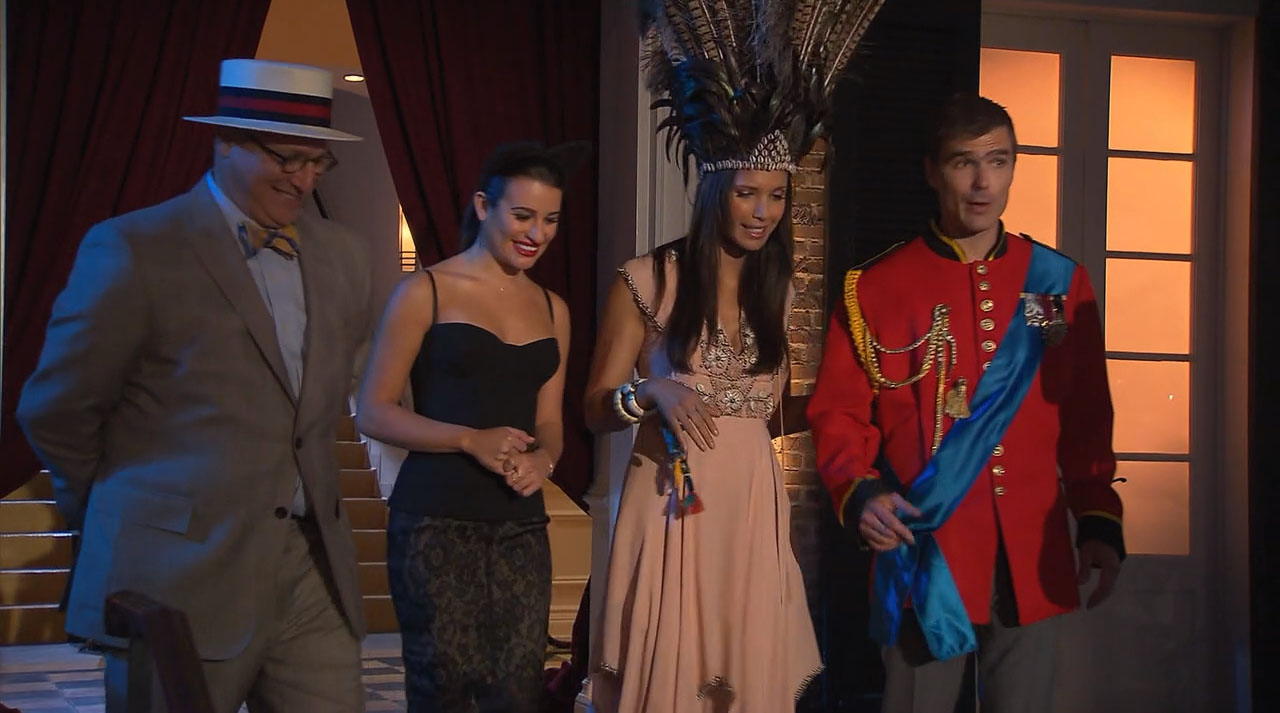 Guests arrive at Lea's party. She is dressed as a cat because she apparently put as much thought into her costume as I put into my decision to major in English literature. Hugh Acheson is dressed as Prince Charming, though if you had told me he was a low-budget nutcracker, I would have believed you. Tom is wearing a striped blazer and a stupid hat and is what I can only imagine is either 25% of a barbershop quartet or a Kentucky Derby bystander. Apparently, the entire costume budget for the judges went to Padma's bejeweled headdress. She claims to be dressed as a voodoo priestess, but really she's just dressed as the center of attention. 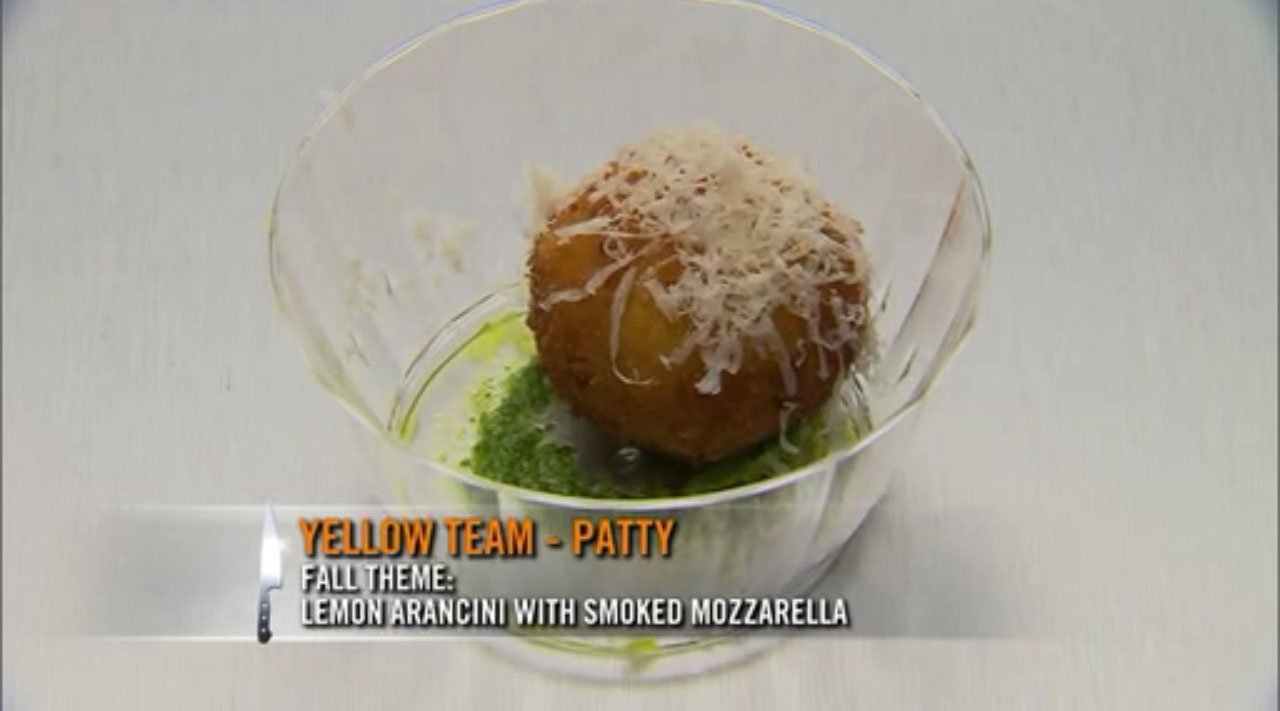 As the judges make their rounds they taste all of the different vegetarian creations. Carrie and Stephanie Cmar are the only ones who came up with delightful names for their dishes: "Doomed Shrooms," a dish of mushrooms with black garlic and radicchio, and "Freaky Leeky," ash coated vegetables with fontina fonduta, both go over well with the judges. Nick and Patty's station is a hit as well with his butternut squash cannoli and her lemon arancini with smoked mozzarella. 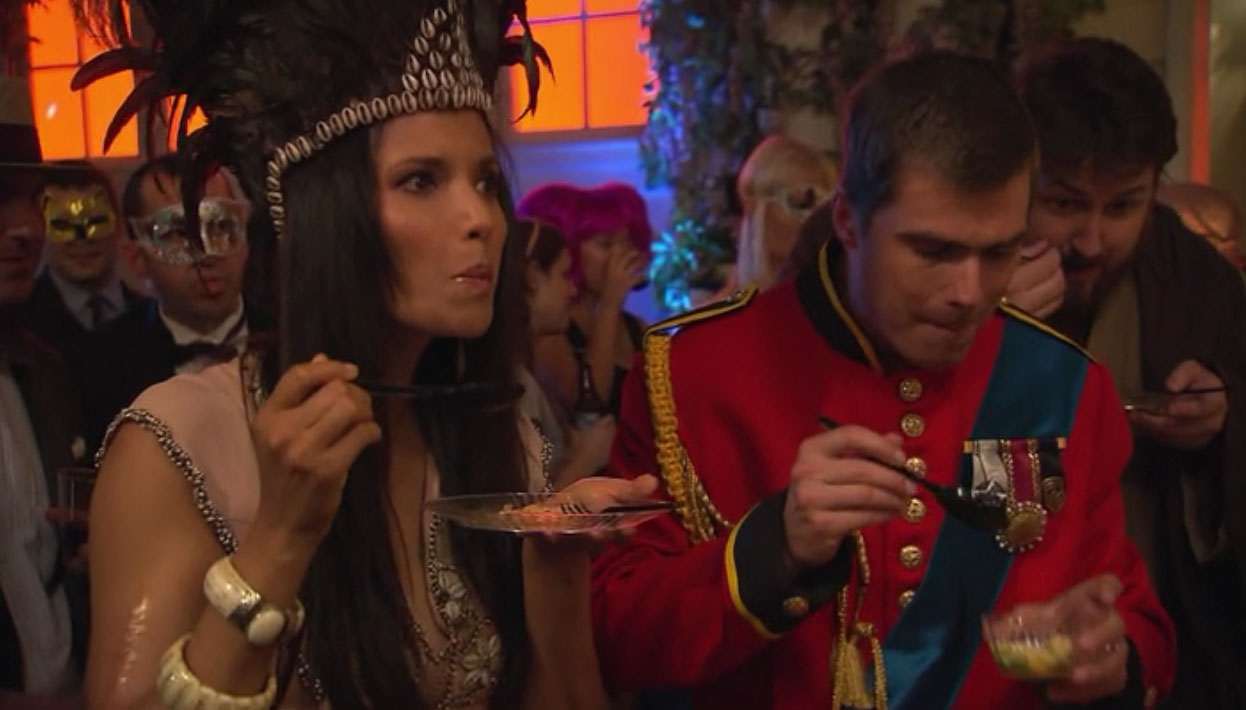 Travis and Carlos Gaytan prepared a raw vegetable ceviche and a goat cheese fondue, respectively. They explain that they played on the balance of hot and cold, devil and angel. Padma claims that both of the dishes pack a lot of spice, which she likes, and I'm starting to wonder if anything that comes out of her mouth isn't a sexual double entendre. During a run-in with the voodoo priestess of Bravo himself, Andy Cohen, we learn that Tom is dressed up as The Great Gatsby, and apparently not as an extra in The Legend of Bagger Vance. 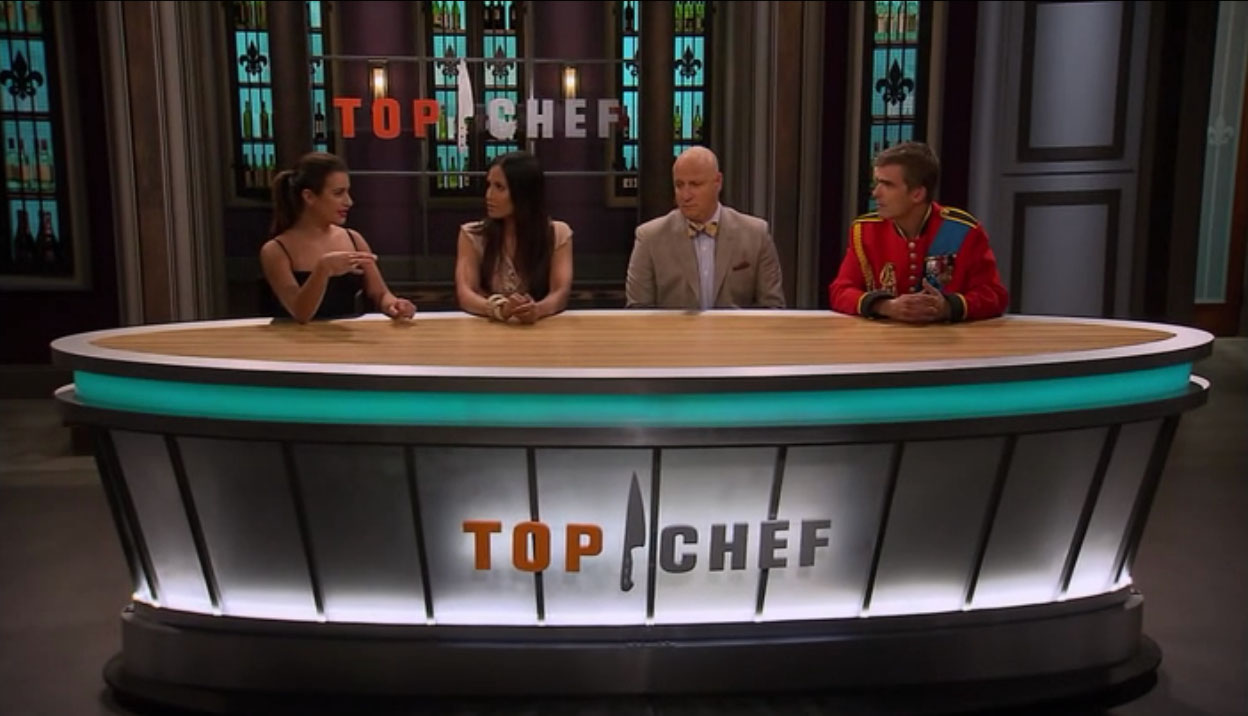 Back at Judges' Table, Lea, Tom, Padma, and Hugh discuss the winners and losers. They all look normal from the waist up once they remove their respective headband, hat, and obnoxious headdress, except for Hugh. He is sitting at the table like a kid who demanded to wear his Halloween costume on November 1st and his parents were just to damned tired to put up a fight. The top two teams of the night are Carlos and Travis & Nick and Patty. Patty basks in the glory of not being in the bottom for once, but ultimately the judges declare Travis and Carlos the winners.

The bottom two teams for this challenge are unsurprisingly Brian and Bene for their spooky spa salads, and Nina and Michael. Lea was disappointed in Brian and Bene's choice to make two salads, ignoring her plea for cheese. The judges agree that Nina and Michael as a team did not work, so they were a lot like my strapless bra at my friend's wedding last summer. 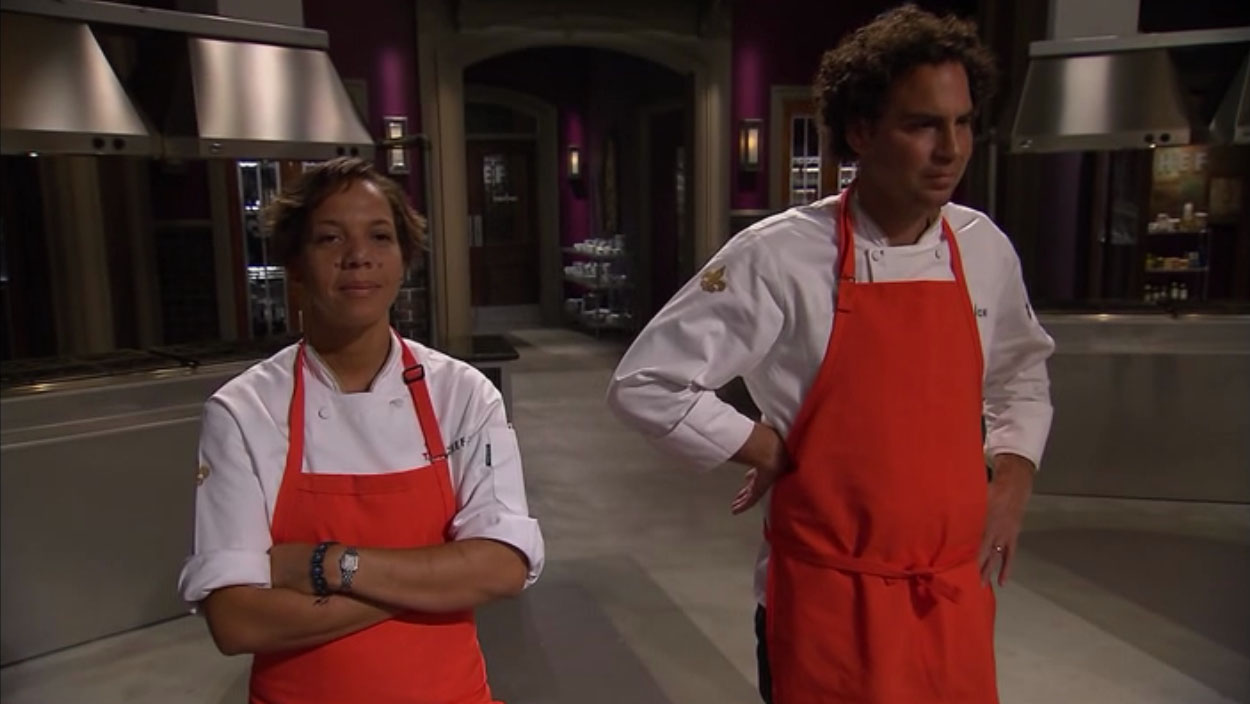 "Unfortunately for one of you there will be no tricks or treats," says Tom just before the elimination. But you're wrong, Tom. In fact, whoever is eliminated will be given the worst trick of all: made to think they matter thanks to a short five weeks on reality television only to have to return to their regular life off camera. That person is Michael, who is sent home for his disappointing arancini.

Without Michael, how will the chefs stay aware of the local landmarks when they drive around New Orleans on challenges? It looks like from now on they will be on their own.