Well, it turns out that Top Chef was thankfully not affected by the shutdown. Government program? No. Hour long advertisement for cars and grocery stores in between Real Housewives episodes? That it may be. Whatever it is, the eleventh season has begun and is off to a sweaty running start in New Orleans. If you like shows with transition shots that are exclusively brass instruments played by old black men and alligators briefly surfacing in a swamp, you are really going to love this season.

We meet the new chefs as they arrive at the house and introduce themselves. It's like the first day of summer camp or The Real World where everyone is trying to learn about their newfound roommates and evaluate who they'll try to hook up with. 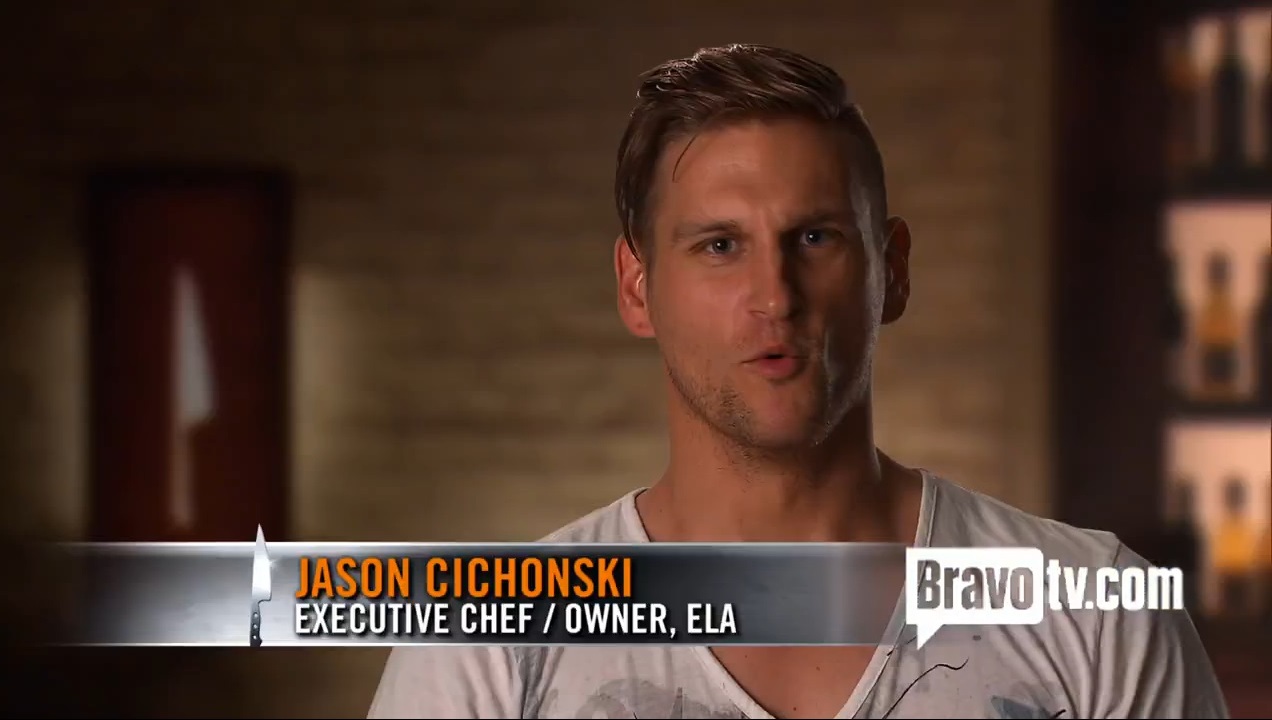 Speaking of wanting to hook up, one of the first introductions we get is to Jason Cichonski. Jason looks like every lacrosse player that rejected me in high school and he humbly admits that he was voted "Philly's Sexiest Chef" in a voiceover during a photo montage of him shirtless. Jason spots his friend Nicholas Elmi at the house and the two bro-hug (that's when dudes are happy to see each other, lean in and slightly bump chests, then pat each other on the back hard enough to say, "I'm happy to see you, but not aroused or anything," before quickly backing away to a safe distance and confidently nodding at one another). 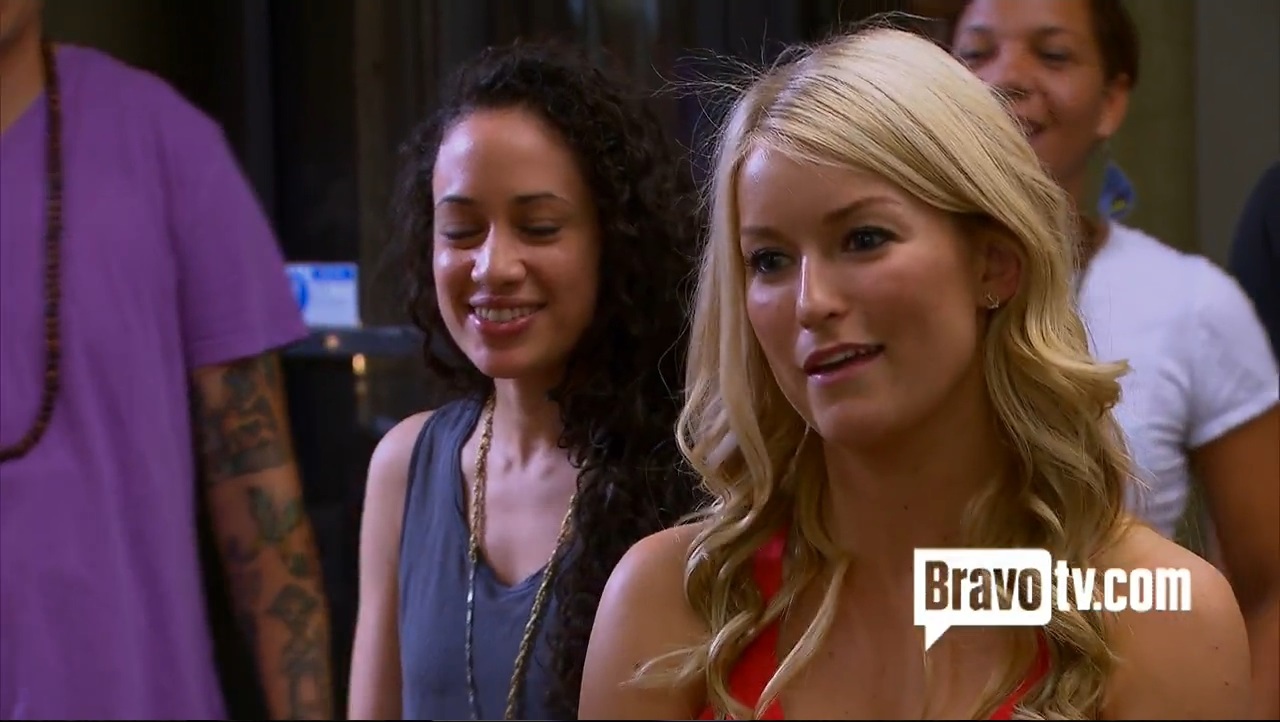 Next we meet Janine Booth from Perth, Australia. She is a hot blonde who describes herself as, "not so ugly," which is kind of like saying I was, "not so sober" at my ex-boyfriend's wedding last summer. Also competing is Stephanie Cmar who did not make it to compete in Top Chef Seattle and obviously has something to prove.

As everyone is relaxing in their luxurious, Bravo-funded Louisiana mansion, in walk judges Tom Colicchio and Padma Lakshmi. Janine gasps and says that seeing them in the room makes her want to cry and pee, which is exactly how my roommate's dog reacts when I enter a room. Several chefs acknowledge that "Things just got real." Stephanie says, "Things just got really really really real," which is probably the most real something could get on a network that uses "real" in the title of shows where the stars probably couldn't even define that word if they were holding a dictionary. Okay, now I have typed "real" so many times in this paragraph that it no longer sounds like an actual word to me, and also, am I having a stroke? 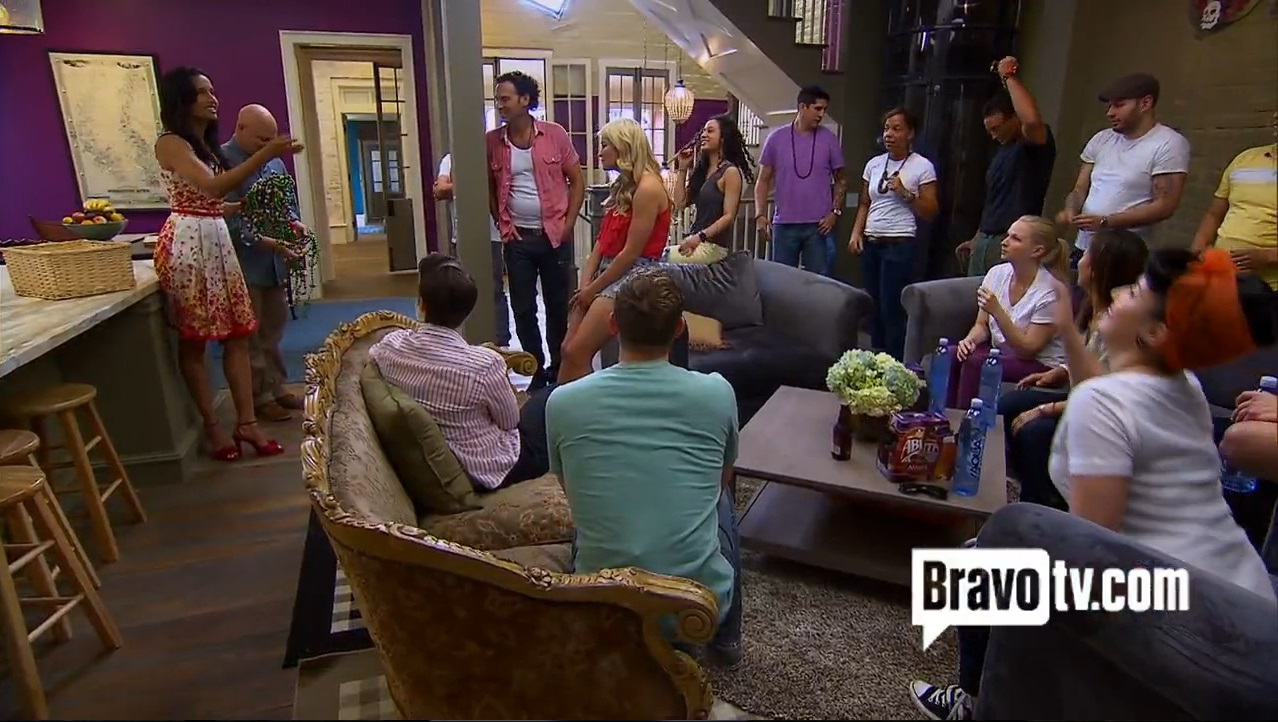 Tom and Padma inform the chefs that there will be no Quickfire Challenge and they are moving right into the Elimination Challenge. I repeat: NO QUICKFIRE CHALLENGE. THERE ARE NO RULES. Okay, there are lots of rules, and most of them are actually the same as before, they're just cutting out a step along the way. The challenge is to cook a dish highlighting a local delicacy for a swamp soiree. Tom and Padma start tossing out strands of Mardi Gras beads which makes no sense because not one person flashed a boob, so I think someone needs to tell them that just because they're changing the rules of their show does not mean they can change the rules of Mardi Gras. The beads tell the chefs whether they will be cooking with alligator or turtle, which are not only New Orleans delicacies, but also two of the animals I remember reading about in Ranger Rick magazine as a kid at the doctor's office. They are both cold-blooded. Nostalgia!

Two of the chefs this season are from New Orleans and competed in a Bravo.com series called Padma's Picks. These two, Michael Sichel and Justin Devillier, have immunity this challenge because they "cooked to get on the show," though technically, everyone cooked to get on the show, they are just the only two who helped Bravo make more advertising money through online video. Michael is happy to be cooking on his home turf and says he is, "Confident, not cocky. Cocky is being egotistical. Confident is being cool." So, yeah, he's not going to be a total nightmare this season or anything.

The chefs get their respective reptile meats and completely-reasonably-priced Whole Foods products to go with them and head to the kitchen. Carlos Gaytan explains that he illegally came to the US from Mexico, started as a dishwasher, and has worked his way up to chef. Bravo kindly includes subtitles when he is speaking, which has the dual function of clarifying what he is saying and reminding us that he has a sad story and we are probably supposed to want him to win at least a little bit. We also meet Nina Compton, who is from Saint Lucia, where her father was Prime Minister. She says she wants to do for her home what her father did, but with food. I don't know if I understand what she's trying to do, but I also don't understand the political systems of most Caribbean nations, so maybe this makes sense.

During the challenge Janine is dressed from the waist up like a chef and from the waist down like she's headed to a booze cruise in Daytona Beach. All of the men are staring at her as she cooks in denim cutoffs and sandals. I will say, it's tough to watch a hot, thin blonde running around in shorts while I'm eating leftover cake for dinner with a spoon because I'm too tired to wash a fork, and not wonder if I have made a few questionable life choices. Thanks a lot, Janine.

Tom shows up to check in on the chefs. Seconds before he arrives, Jason cut his finger while chopping. He feels bad that this is Tom's first impression of him, but I feel bad that he's hurt and maybe he needs a bandage, or some Advil, or a woman to comfort him and maybe kiss his finger or his mouth to make him feel better.

Making his rounds, Tom tries to track down Carrie Mashaney, who is nervous around Colicchio and worried that her more humble beginnings, when compared against the other chefs in the competition, means that she shouldn't be there.

In the morning the chefs receive an enormous gift basket and a visit from judge Emeril Lagasse. He brings the chefs beignets for breakfast and to pumps them up for the day's challenge. Shirley Chung, a huge fan of Emeril's, is so nervous to see him that she claims to, "Shove a beignet in my face so I don't have to talk to him," which is weirdly also my move in most conversations, so we'd probably get along.

Everyone arrives at the swamp where they'll be serving party guests only to find all of their tables, equipment, and tools stacked up like they're on the warehouse level in IKEA. With some teamwork and passive aggressive yelling, they all get the site set up and ready for cooking. Patty Vega, who seems emotionally worn out halfway through the first challenge, realizes that she does not have enough of the alligator and sausage for the dish she originally intended and needs to essentially start from scratch with just hours until service.

Jumping from the sweaty chefs to a fancy swamp boat (those are two words I never thought I'd write together, "fancy" and "swamp") we see Padma, Emeril, Tom, and guest judge Curtis Stone sipping champagne. Diners have strands of Mardi Gras beads that they give the chefs they like the most. The three chefs with the most beads at the end of the night will be the top three, and the chefs with the least beads are up for elimination. 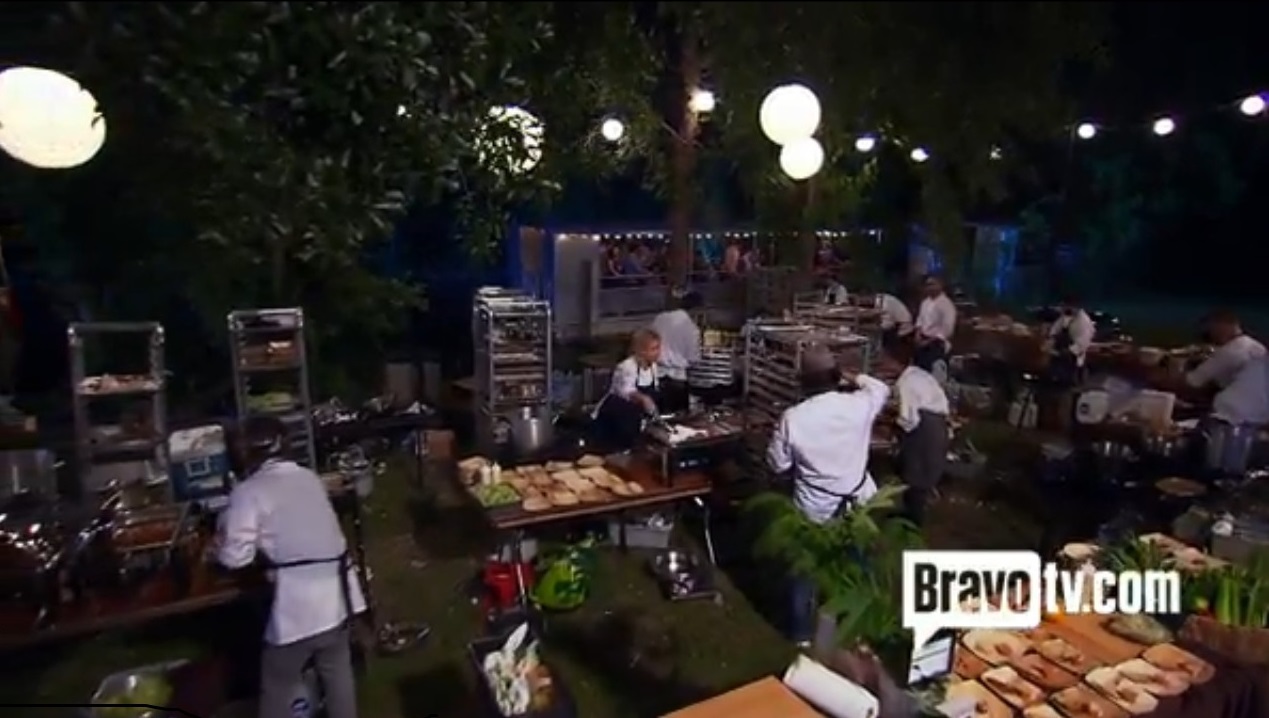 The guests and judges make their rounds. Everyone loves Nina's curried turtle meatballs as well as Janine's bacon and alligator confit with tomato jam. Sara's deep fried alligator with smoked chiles is a take on General Tso's chicken and, according to Padma fanning her mouth, pretty spicy. As the event winds down, guests hand out their beads to their favorite chefs, though it's hard to tell whether any of them earned them the old fashioned way with a boob or two (sometimes it pays to be a woman, just not often).

Back at the kitchen the chefs wait for Judges' Table and act like they all don't want to get hammered immediately. A television screen comes on with the judges discussing the dishes from the night. Normally, the chefs have to wait until the season airs to see what Tom and company said behind their backs, but this season they can watch in real time! What fun for them! 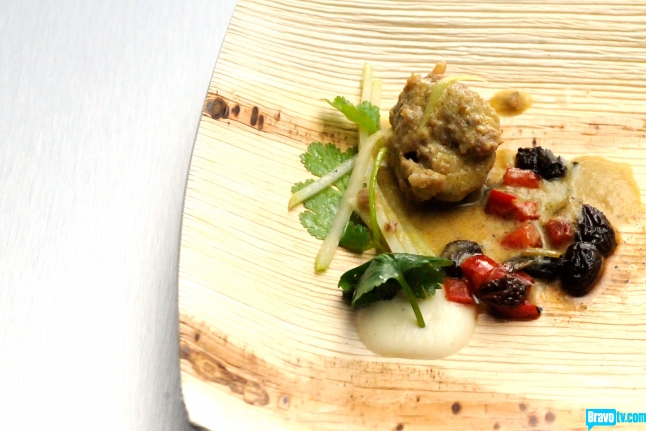 Padma calls in Sara, Carrie, and Nina. They had the strongest dishes of the night. Judges and diners both loved all three dishes, but the best is Nina's turtle meatballs. The women return to the kitchen and Nina sends in the bottom three, which were Aaron Cushieri, Ramon Bojorquez, and Patty. Aaron's duo of turtle confit and turtle ragout had great flavors, but the tagliatelle was mushy by the time diners reached his table. Ramon's braised turtle with Thai dashi, on the other hand, was bland. He reveals that this was probably because he iced the dashi since it wouldn't cool down enough before freezing and he didn't want bacteria to grow. Patty's dish just didn't deliver, likely because of the eleventh hour overhaul. Tom tells her that if he was served that as a home-cooked dish he would enjoy it, but it didn't stack up to the competition. I think it was pretty impressive, even for a home dish, but last night I "cooked" dinner and it was leftover cake, so what do I know. And yes, if you've been reading closely you know I had cake for dinner two days in a row. I did not come here to be judged, that's for the chefs.

Ultimately, Ramon's bland dashi forces Padma to say he must pack his knives and go. I hope that one day there's a reality show about finding America's best serial killer that can use this line, too.

Well, there it is, our whirlwind first taste of Top Chef New Orleans. Challenges will be locally focused with an unsurprisingly common appearance by Mardi Gras beads, so it looks like this season is going to be a lot like my Summer: long, sweaty, and full of opportunities for flashing.