Harvard University's third annual Science & Cooking public lecture series brings chefs from around the world to lecture on the intersection of science and cooking. And Eater Boston editor Rachel Leah Blumenthal is on the scene. This week: Nandu Jubany of Barcelona's Can Jubany. 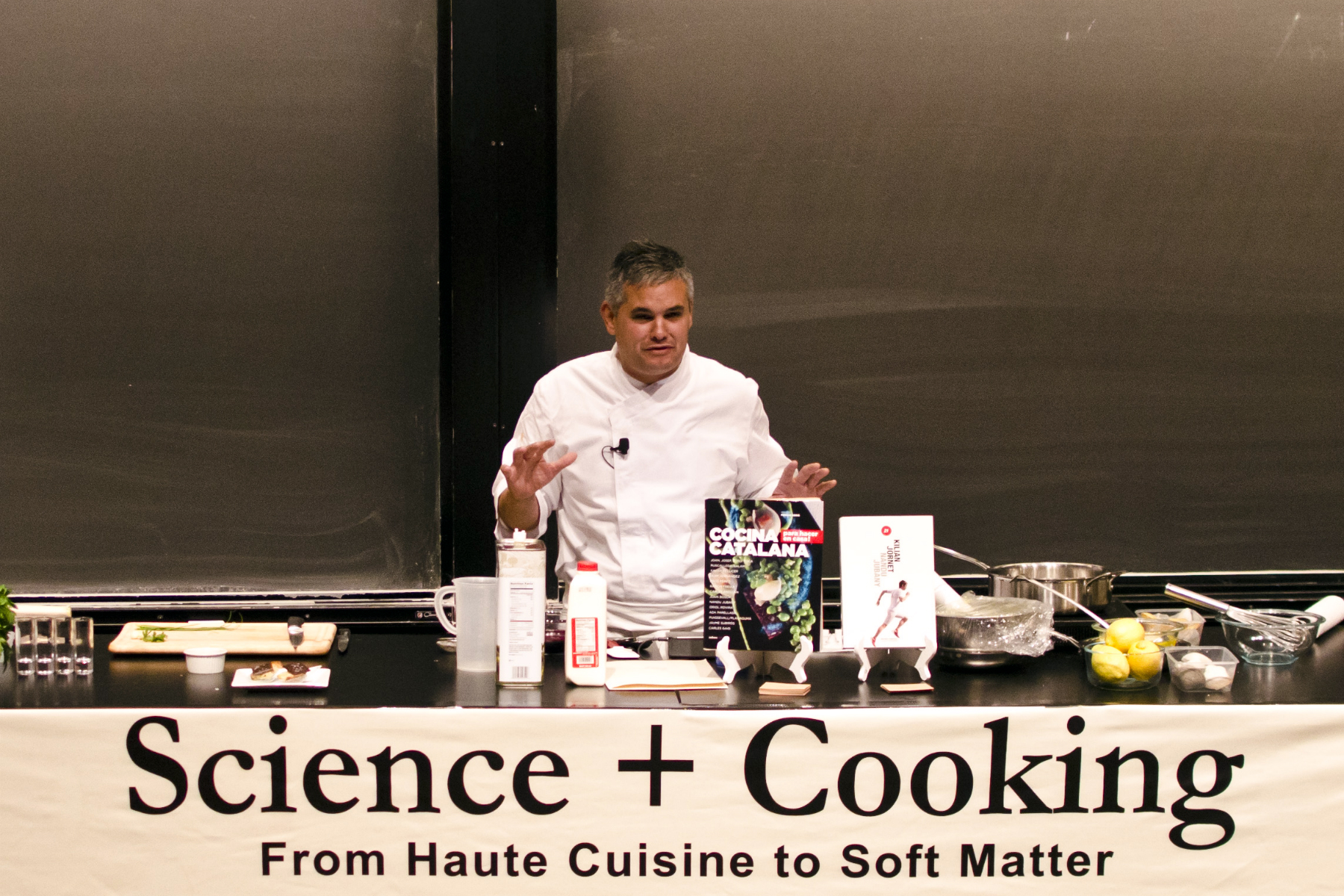 Harvard's Science and Cooking lecture series continued last night with Nandu Jubany of Can Jubany, a one Michelin star Catalan restaurant outside of Barcelona. Jubany spoke on the topic of "Emulsions: Concepts of Stabilizing Oil & Water," rapidly demonstrating five emulsions (a Catalan allioli, pil-pil sauce, and more) and doling out samples of chocolate and later allioli as consolation for keeping the audience from catching the start of Game 5 of the World Series. Harvard professor Michael Brenner, a weekly presence at the series, interspersed quick overviews of the science behind emulsions, which, put simply, are mixtures of liquids that wouldn't normally mix.

More specifically, an emulsion is a two-phase system: one liquid is suspended — in the form of many droplets — within another liquid. The suspended droplets are referred to as the dispersed phase, while the other liquid is the continuous phase. For an emulsion to form, those suspended droplets must be kept away from each other, or they'll just interact and separate out from the continuous phase. Imagine oil and vinegar before they're combined with some vigorous shaking.

To keep from interacting with each other, the droplets need to be coated with molecular "armor," Brenner explained, and those molecules are known as surfactants — or more long-windedly, as surface active agents. Surfactants stabilize the interaction between an emulsion's two phases. Take an oil-in-water emulsion, for example, like mayonnaise. Oil is dispersed in an aqueous substance (vinegar or lemon juice, typically), and egg yolk stabilizes it into one well-combined condiment. The yolk contains lecithin, a surfactant. Lecithin's structure is ampiphilic, meaning that part of it plays nicely with water while the other gets along better with oil, resulting in the keen ability to hold oil and water together in an emulsion.

Along the mayonnaise line, a Catalan allioli served as the first demonstration. While some Catalan chefs omit eggs, simply emulsifying garlic (which has its own surfactants) and oil, Jubany included eggs for ease of preparing enough for the entire nearly-full auditorium to sample. Otherwise, he explained, it would have taken way too much garlic to be practical, and the room would have smelled for days. After several minutes of mixing with a mortar and pestle, Jubany presented the thick allioli, which dutifully stayed stuck to the bowl even when he held it completely upside down. "It's just oil," exclaimed Brenner. "Amazing!" For demonstration purposes, Jubany displayed the completed allioli with sausage and potatoes, a bit disappointed that he could not legally bring his own Catalan sausages with him overseas. 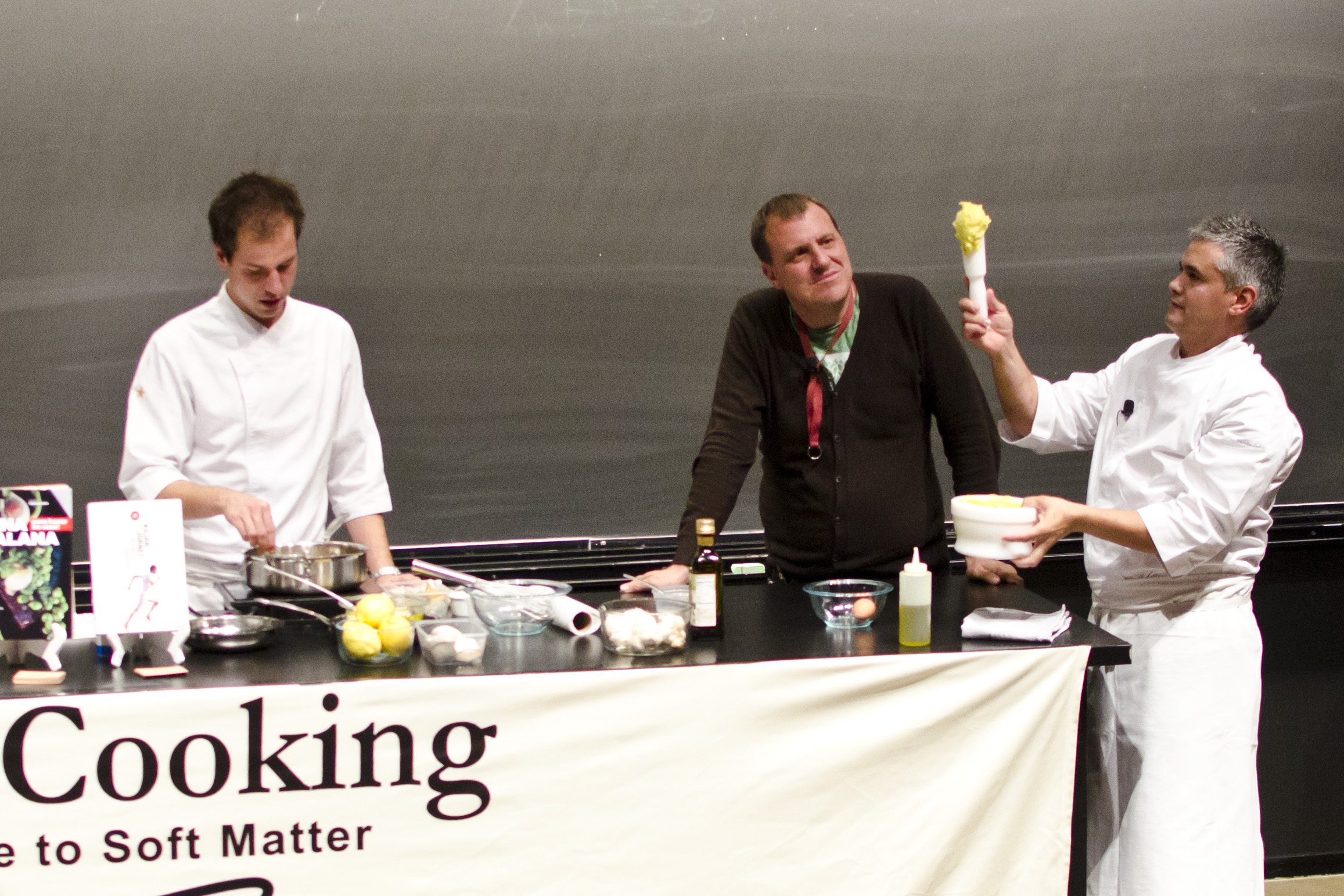 Next up, a classic Hollandaise, one of the French mother sauces. Jubany used egg yolks and butter with lemon juice, salt, and chives, carefully whisking together the liquids. Creating the surface area in an emulsion — the "armored" droplets dispersed throughout the continuous phase — demands a price, explained Brenner. That price is energy, and that energy can be supplied by the manual task of whisking. The finished Hollandaise landed on a plate with white asparagus (the same as green asparagus, but shielded from sunlight) and clams, which fought with Jubany a bit, refusing at first to open. "They are American," he said. "They are resistant."

The third emulsification was a pil-pil sauce, a Basque preparation involving olive oil, plenty of garlic, and cod cheeks. Fish bones, which are less expensive than the cheeks, can also be used. The gelatin from the fish as well as the surfactants from the garlic both drive the process. As with other emulsifications, properly controlling the temperature is essential. In this case, the fish will simply fry in the oil if the temperature is too hot, and the sauce won't form.

Next, Jubany demonstrated a lactonesa — mayonnaise made with milk instead of eggs. Milk is even an emulsion itself, butterfat droplets suspended in a water-based fluid. Jubany made a foam with the finished lactonesa and liquid strained from kimchi, sprinkled seaweed on the mixture, and dropped griddled shrimp on top. 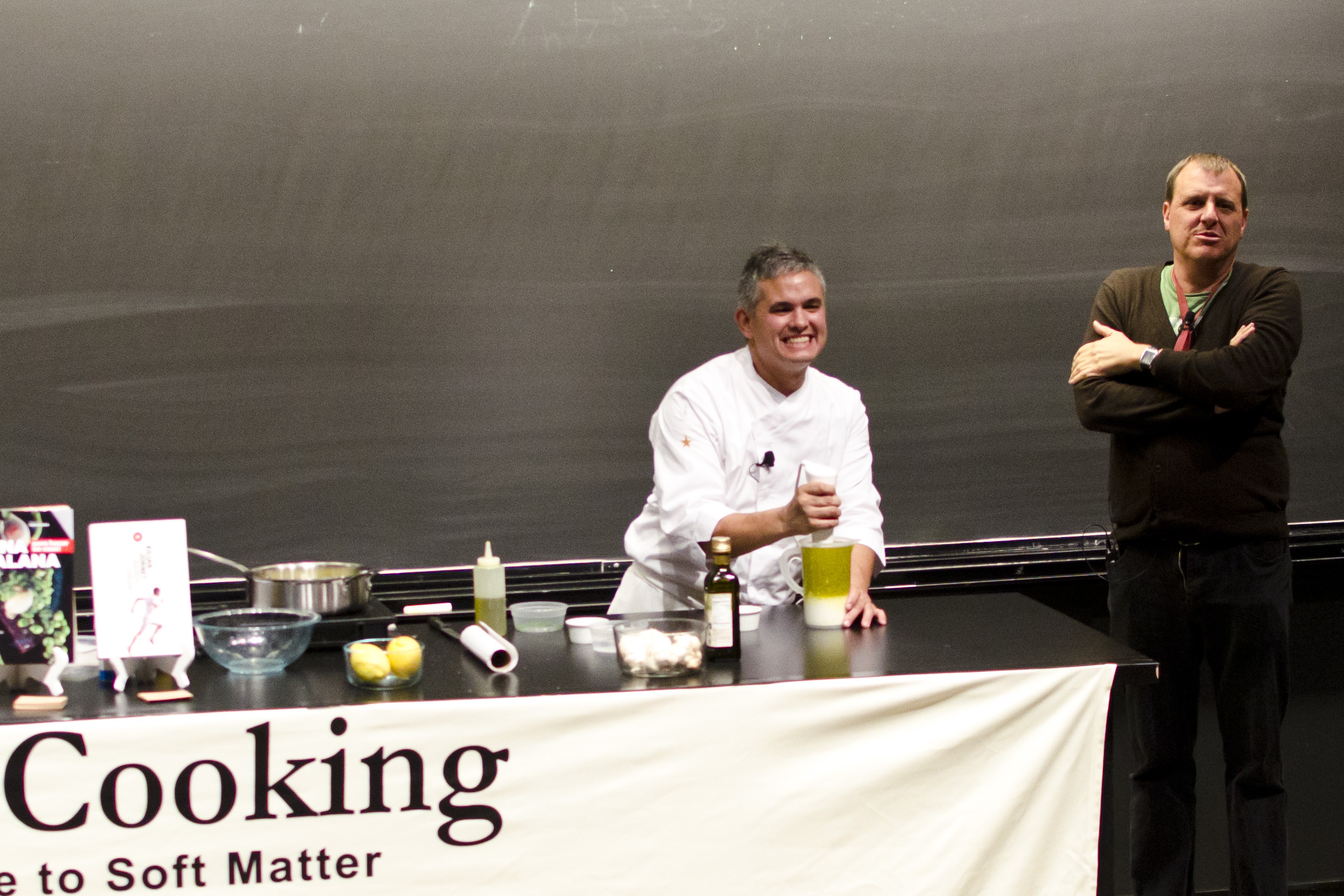 The final demonstration was the most reminiscent of molecular gastronomy, complete with a flowery name: "seawater air and beetroot air." Airs — a pretty way of saying "foams" — don't precisely fit the technical liquid-in-a-liquid definition of an emulsion, but the idea is the same, with pockets of air essentially taking the place of the dispersed phase. The seawater air was oyster juice with air bubbles trapped in it, introduced by an immersion blender, while the beetroot foam was the same but with liquefied beets. Carrots work as well, readily turning into foams without added ingredients, but a lot of other vegetables need a little help from an emulsifying additive like lecithin.

The takeaway lesson with emulsions is that temperature and speed matter. In each demonstration, Jubany stressed that he keeps the components of each emulsion the same temperature. This doesn't necessarily hold true for all emulsions, but it's what has worked well for him. As for speed, it's always important to start off slowly when whisking or blending. Some emulsions require near-constant stirring or shaking, and some have a very narrow range of temperatures where they'll succeed. With some complicated emulsions, there's a fine line between perfect and ruined.

The Harvard Science & Cooking lecture series continues on Monday, November 4th, with Joanne Chang (Flour Bakery and Myers + Chang in Boston) speaking about the science of sweets. Seating for the free event is first come, first served, and more details can be found on the Harvard website.