Before this episode even begins, Bravo is yelling at me to, "Get your mobile device ready, Top Chef Play Live starts now!" No, Bravo, I'm busy using my phone right now playing Bejeweled Blitz and scrolling through my ex's new girlfriend's Instagram and OH MY GOD THEY WENT TO THE BAHAMAS TOGETHER HE DOESN'T EVEN LIKE THE BEACH.

Okay, sorry, I'm back and have calmed down.

The episode picks up after the last elimination on a rather uplifting note with Louis Maldonado upset after Judges' Table and remembering his first negative review and how it brought him down. I get it Louis, reviews can be tough. One of the first reviews I ever heard about my stand up was, "Your pants were a little too tight, but your hair looked really shiny," so I know where you're coming from. Who am I kidding? Those are both compliments!

Nicholas Elmi is on the phone with his wife, missing his family as this is the first time he's been away from them. Nick met his wife in Atlantic City. I have only been to that cultured metropolis once, and when I was at the pool the waitress serving me giant plastic cups of vodka said, "When it rains here, people get real weird." So I can only assume the two had an incredibly romantic meeting that they often tell their children about. 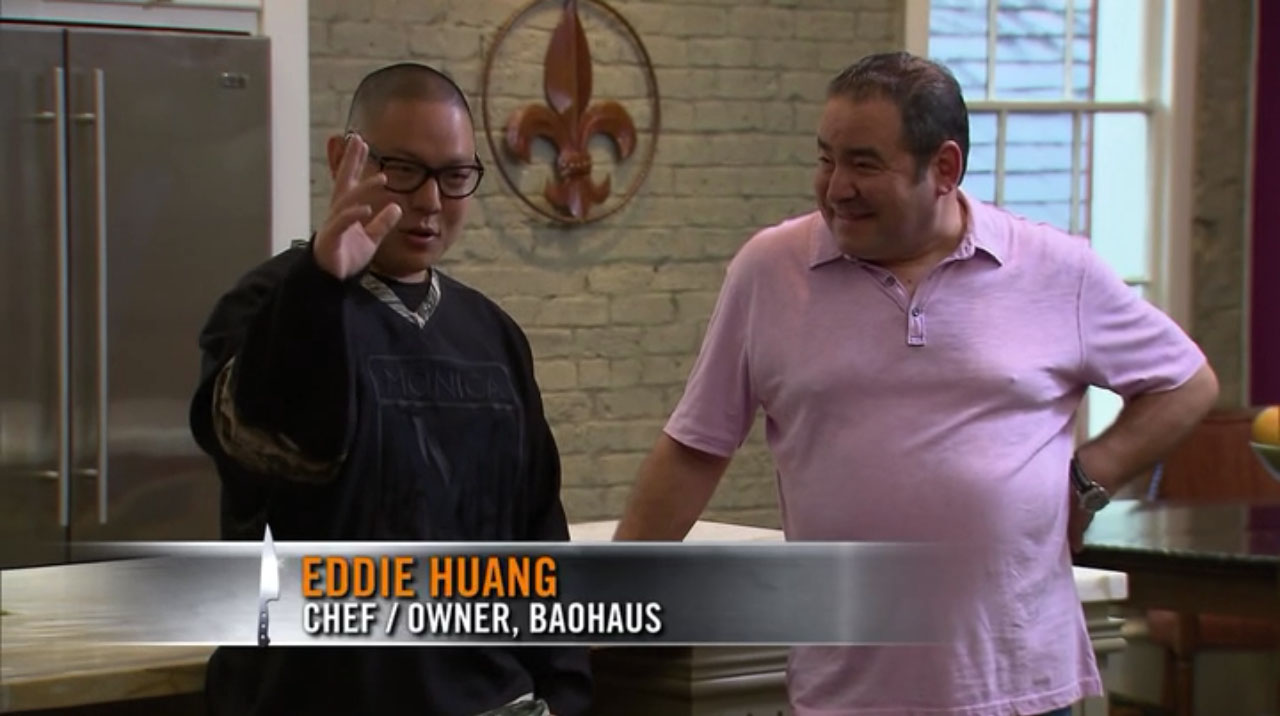 Like the friendly neighbor in a sitcom, Emeril Lagasse shows up at the mansion. He introduces the guest judge for the challenge, Eddie Huang, who is wearing what looks like the deformed lovechild of a hockey jersey and a camouflage hunting jacket. They explain that of the many cuisines in New Orleans, a prominent one is Vietnamese, which is what this challenge will focus on. This means no b-roll of brass instruments or Mardi Gras beads for us this episode.

There is no Quickfire Challenge, and instead only an Elimination Challenge. Emeril divides the chefs into three teams of five, and each team is responsible for creating their version of a Vietnamese menu. 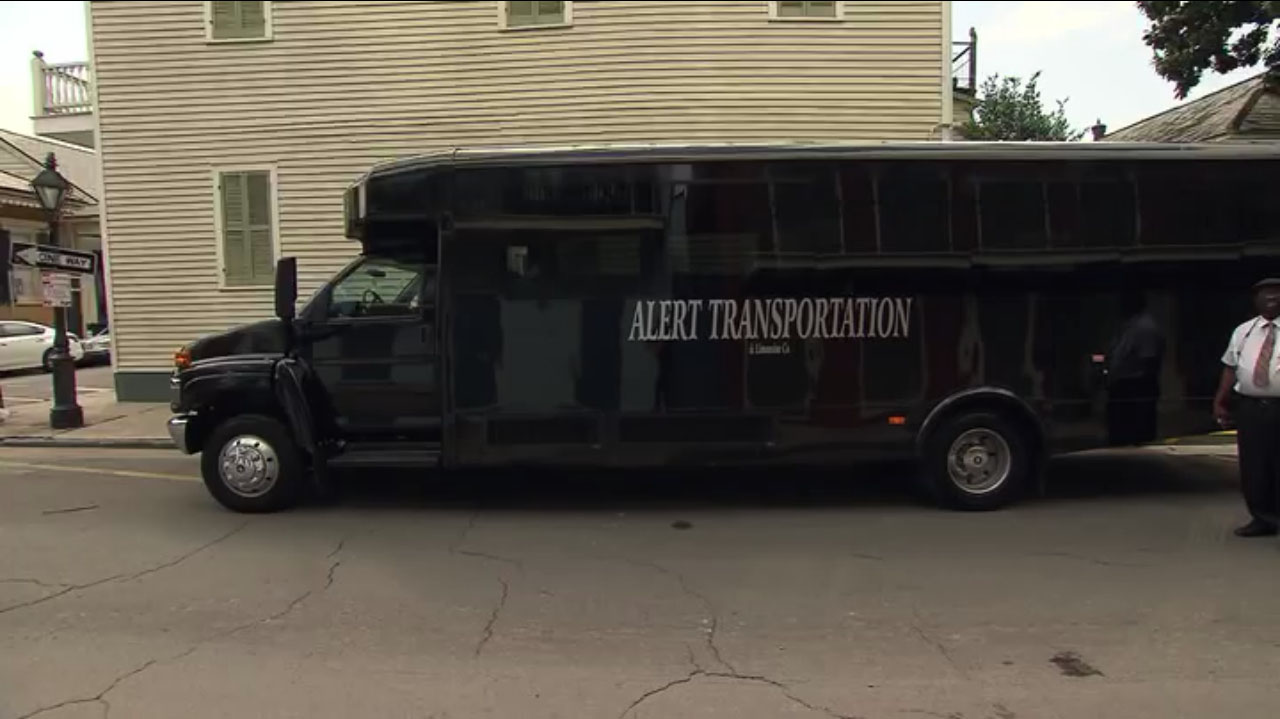 Before they start cooking, though, the chefs are going on a field trip. They board a party bus, so I guess they are going to a bachelorette party? If I know anything about party bus trips, they are going to dinner at an overpriced tapas restaurant and then dancing at a nightclub where a minimum of two girls will throw up and one will drunkenly announce that she thinks her boyfriend is cheating on her and then will smartly decide to leave him a voicemail screaming that exact assumption at him, which is thankfully drowned out by a Rihanna remix and someone yelling, "This song is amaaaaazing!"

The chefs are not going to a bachelorette party, though, they are going on a tour of Vietnamese cuisine around New Orleans. Everyone is divided over this challenge. Some chefs are excited about working with Asian ingredients. Travis Masar can't wait for the challenge because he has a ton of experience with Vietnamese food since his boyfriend is Vietnamese. By this logic, I should know a lot about hooking up with random girls, because my ex-boyfriend is a cheater. Carlos Gaytan doesn't share Travis' enthusiasm as he has never even tasted Vietnamese food.

On the bus, Shirley Chung excitedly yells out every dish idea or ingredient she could think of as if she's in the middle of a heated game of culinary charades. Michael Sichel once again treats the trip like his own Sex and the City bus tour, pointing out all of his favorite spots along the way. Nina Compton says Michael is, "faker than Pamela Anderson's breasts," which is an insult to Pamela Anderson's breasts. 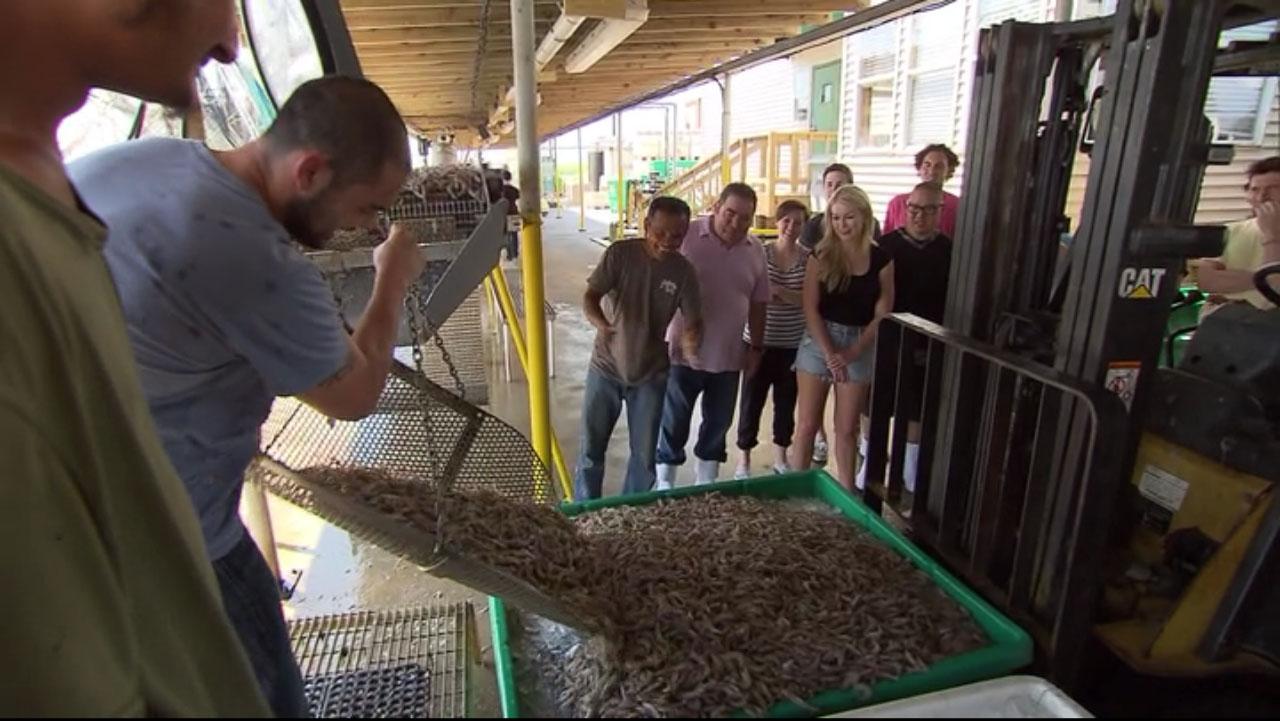 The chefs stop at three locations: a Vietnamese bakery, a shrimp boat, and a noodle house. At each location they taste authentic food and talk to the people responsible for it. Tension during the trip is running high: Carlos being nervous makes Nick nervous, Sara Johannes and Travis are butting heads over who knows more about Vietnamese food, and a bag of Milanos and my desire to look thin when I see my family over Thanksgiving are in an extremely dramatic stand-off (spoiler, the Milanos won).

At the locations as well as at the Asian supermarket, Sara and Travis continue to fight over their dishes. Travis insists on using romaine lettuce for his wrap, though Sara disagrees and thinks a different lettuce is best. This sounds like the kind of argument you'd hear from two people who met on Salad Match, the REAL dating app from the chain Just Salad. But no, this is an argument between two professional chefs. 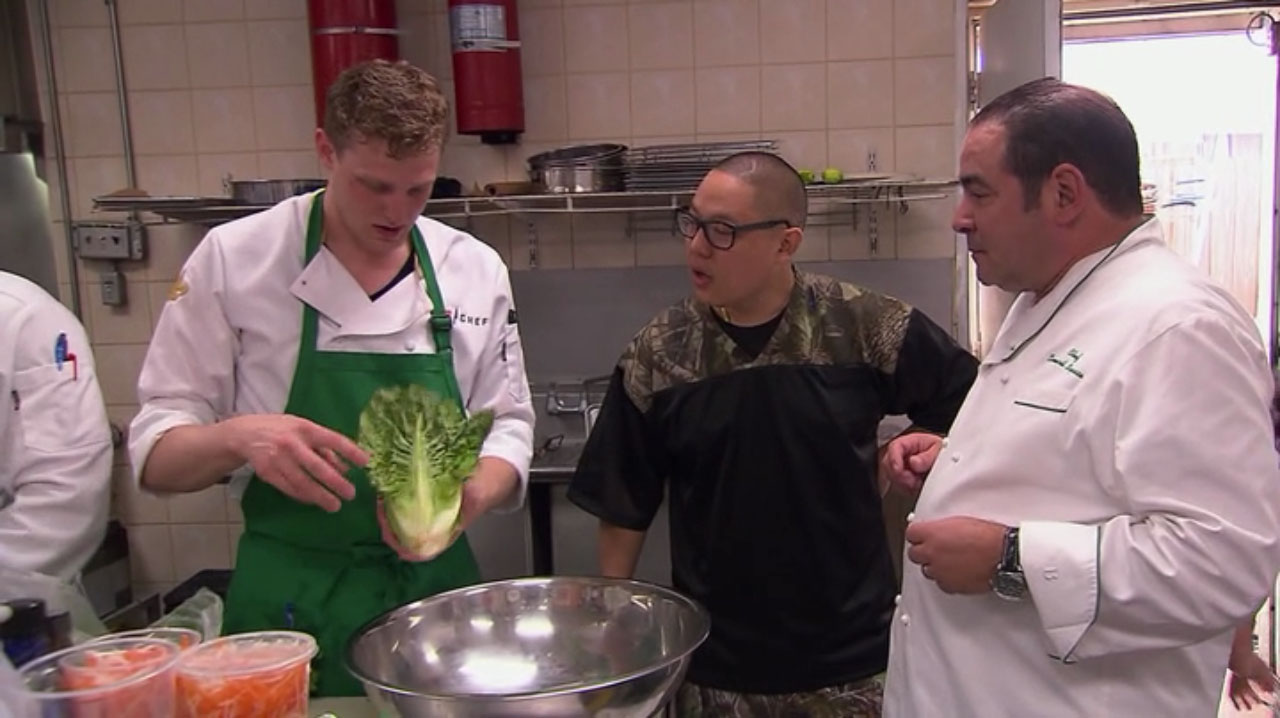 In the kitchen, the teams are running around crazy, as usual. Brian Huskey astutely reminds us, "Just because I'm Korean doesn't mean I can cook Vietnamese." Travis and Bene Bartolotta make a "playing with your meat" joke during prep, proving that there is no limit to how immature you can be and still be a successful chef. Everyone is having a great time until Travis and the rest of the green team realize that their lemongrass never made it back from the store.

Justin Devillier overhears their woes about the missing ingredient. He tells us that he actually bought too much lemongrass and would be happy to give some to the green team if they said something to him about it. Sadly for Travis, Sara, and company, Justin has a real Don't Ask Don't Tell policy with herbs. I'm with Justin on this one, though. Bravo is trying to make him look sneaky and manipulative here, but he really isn't. My dad always said to me growing up, "The only person looking out for you is you." What if later on in prep Justin needed that lemongrass to redo a dish? Or someone else on his team needed it. He's just being smart and looking out for himself and following my dad's advice, too. (Note: Dad, if you are reading this, I need you to pay my phone bill. Thanks!)

Janine Booth is working on the shrimp for the green team, though isn't confident they are done right before service, so she pops them in the fryer one more time before plating them with Bene's very Italian tomato sauce. Justin notes to the camera again that this was a bad idea, but keeps his mouth shut in the kitchen. He is in it to win it and I could not be more on board. 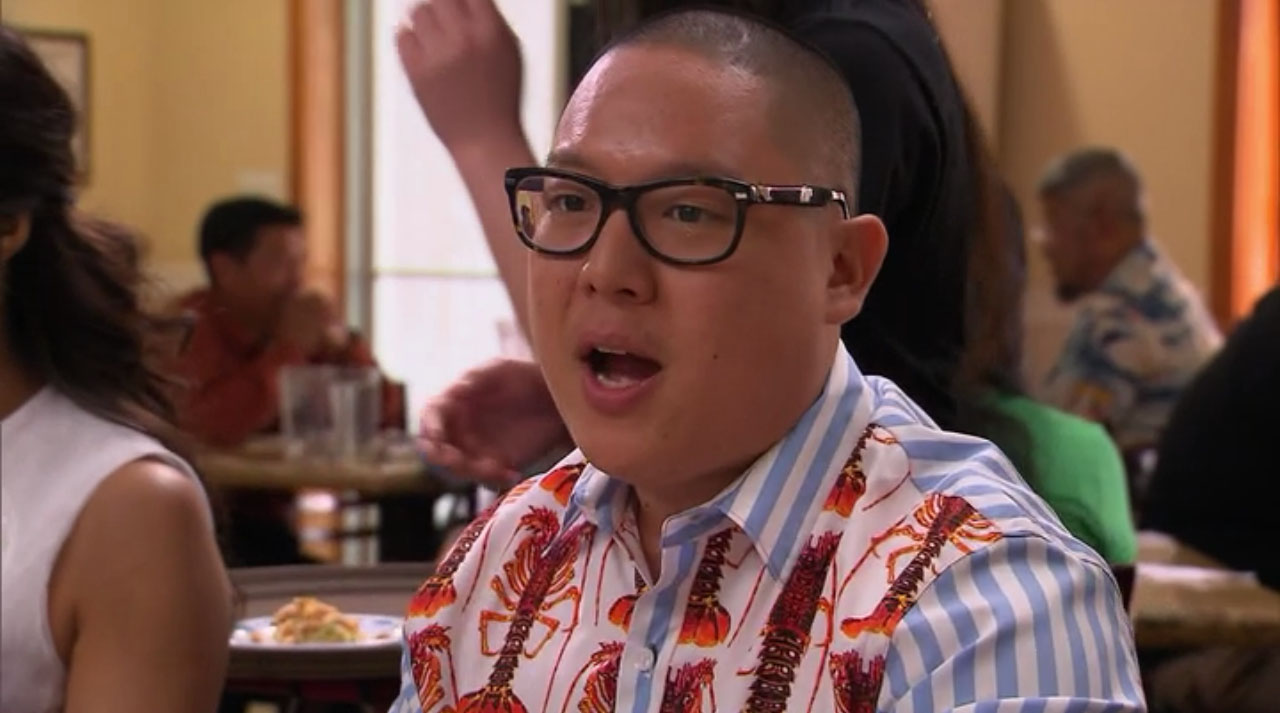 The judges arrive at the restaurant, and everyone is dressed like a normal, non-mentally-ill person except for Eddie. For this appearance he's wearing a button down shirt that is a patchwork of a Brooks Brothers-style striped oxford, and a lobster screensaver from my 1997 PC. Eddie, for chrissake, do you own one shirt that doesn't look like you had to sew two mismatched ones together because you outgrew them?

Across the board it seems that most of the dishes are under-seasoned. Carlos' soup is not sour enough, Nick's black pepper squid doesn't have enough black pepper, and Louis' pho lacks flavor. Tom Colicchio says, "I love Vietnamese food, and after I'm done here I'm going out for it tonight." Pretty sweet burn, Tom. 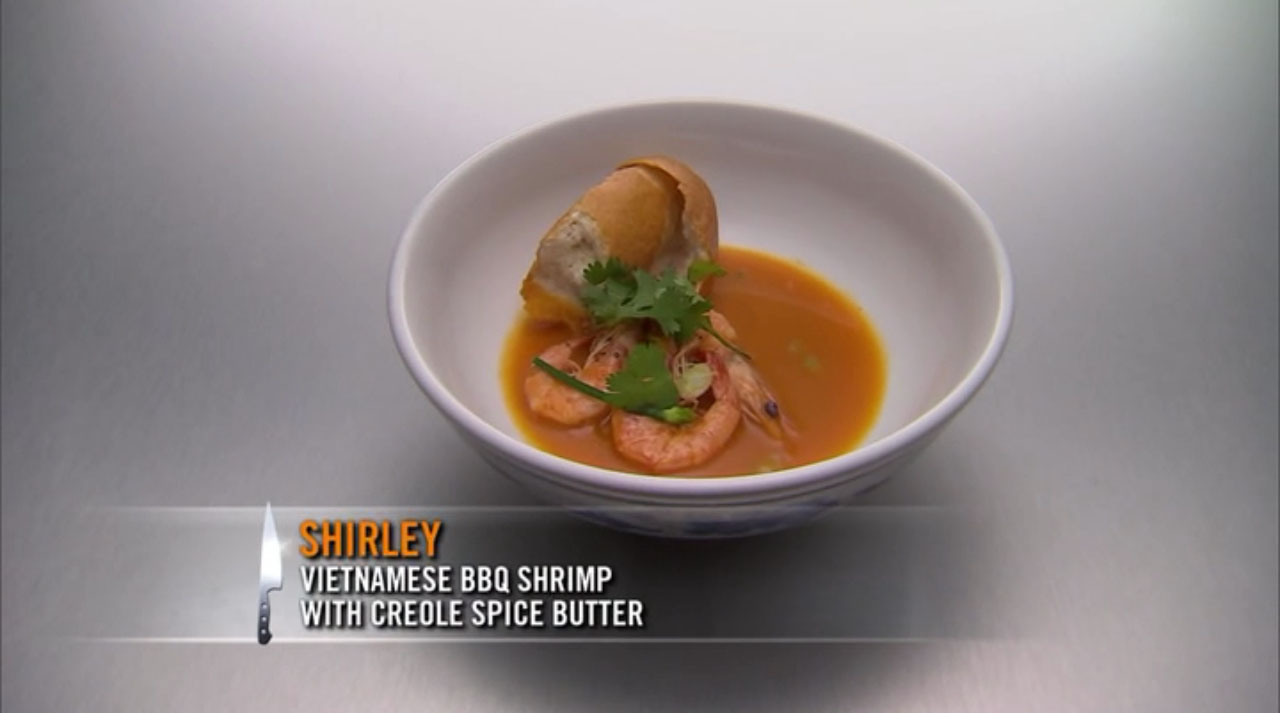 Some dishes do impress the judges, however. Gail Simmons notes that Justin's pho has a mellow spice, which is oddly the name of the sixth Spice Girl who was kicked out of the group for a crippling Xanax addiction (inside info: that was actually me). The judges also love Shirley's shrimp, though are surprised by how much butter she used in it. 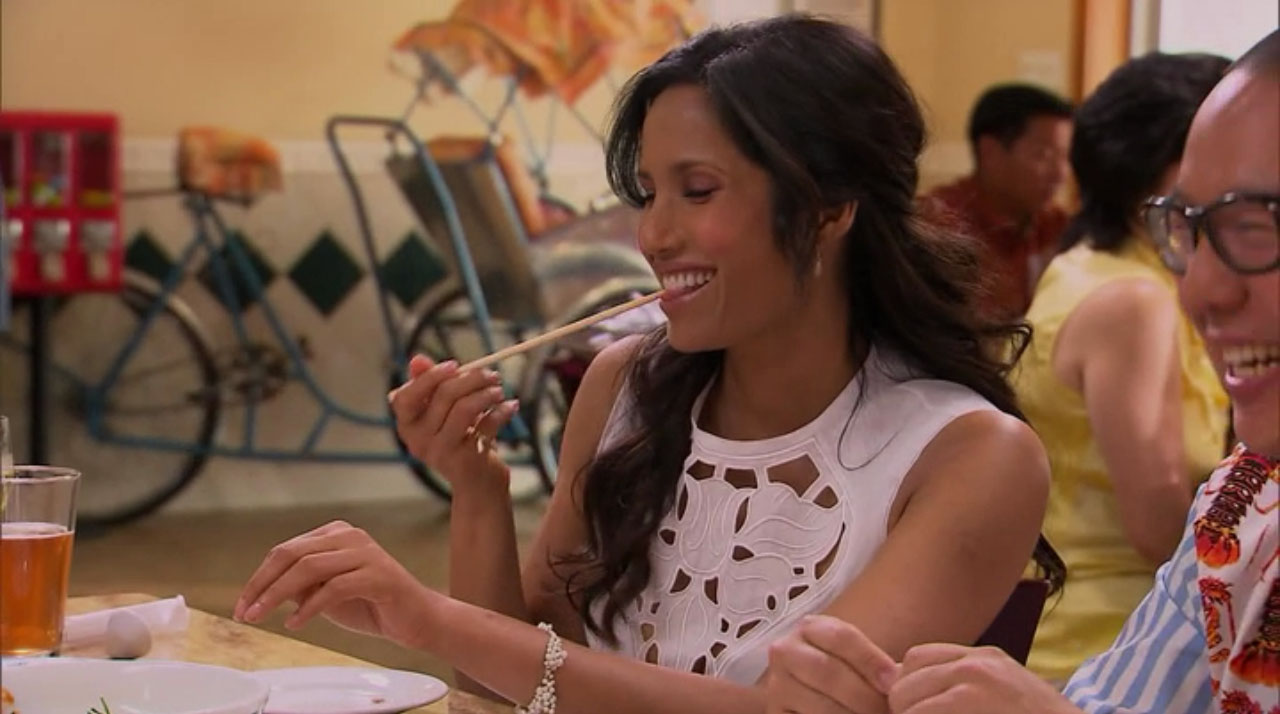 Gail: The shrimp paste in that sauce smacks you in the face.
Padma Lakshmi: I was happy to be smacked in the face by something.
Gail: Nice, that's how you like it!
End Scene

Gail does a TCD&D (Top Chef Dine & Dash), meaning she eats the meal, judges every dish, and then doesn't have to go to the elimination and watch anyone cry before sending them home. 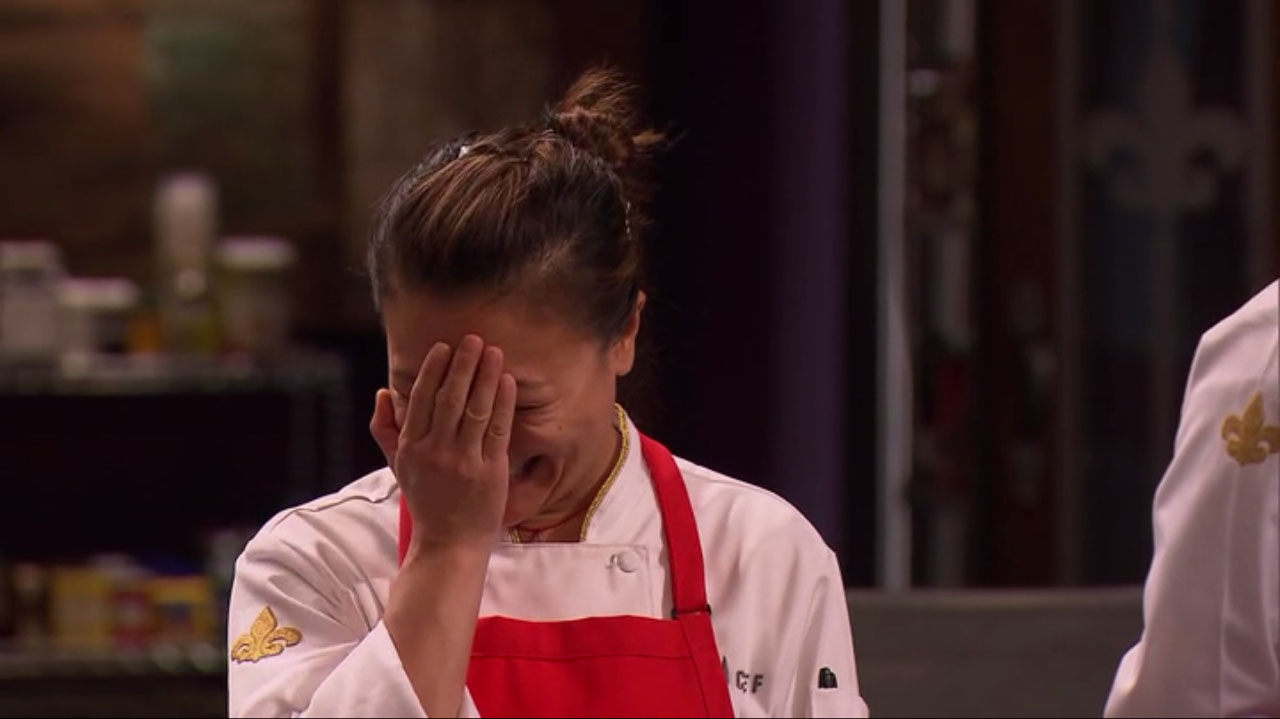 Back at Judges' Table, Padma announces that the red team did the best with the challenge. They loved Shirley's shrimp and Justin's pho, though ultimately Shirley wins the challenge. She also won the planking challenge among the chefs that was an interstitial scene Bravo throws in the middle of the commercial break to make you stop fast-forwarding because you think the show is back, but no, it's some stupid scene that has no bearing on anything. Anyway, great job Shirley! You can cook and apparently have killer abs.

The team that performed the worst is the green team. Sara starts crying as soon as the judging starts, which is also what I would do. Almost every dish from this team had flaws: Travis' decision to do a tomato-based sauce was geographically just plain wrong, Janine's shrimp were poorly cooked, and the rice should have been thrown away. The only decent dish was Stephanie Cmar's "double o" macaroon. The judges acted like they had never before heard of this kind of dessert, though I'm with Gail and all too familiar with the coconut cookies from Passover seder, stuffing them in my face every time my family asks why I'm not seriously dating anyone. They are usually chewy enough for me to buy some time before answering and let them move on to criticizing something or someone else. 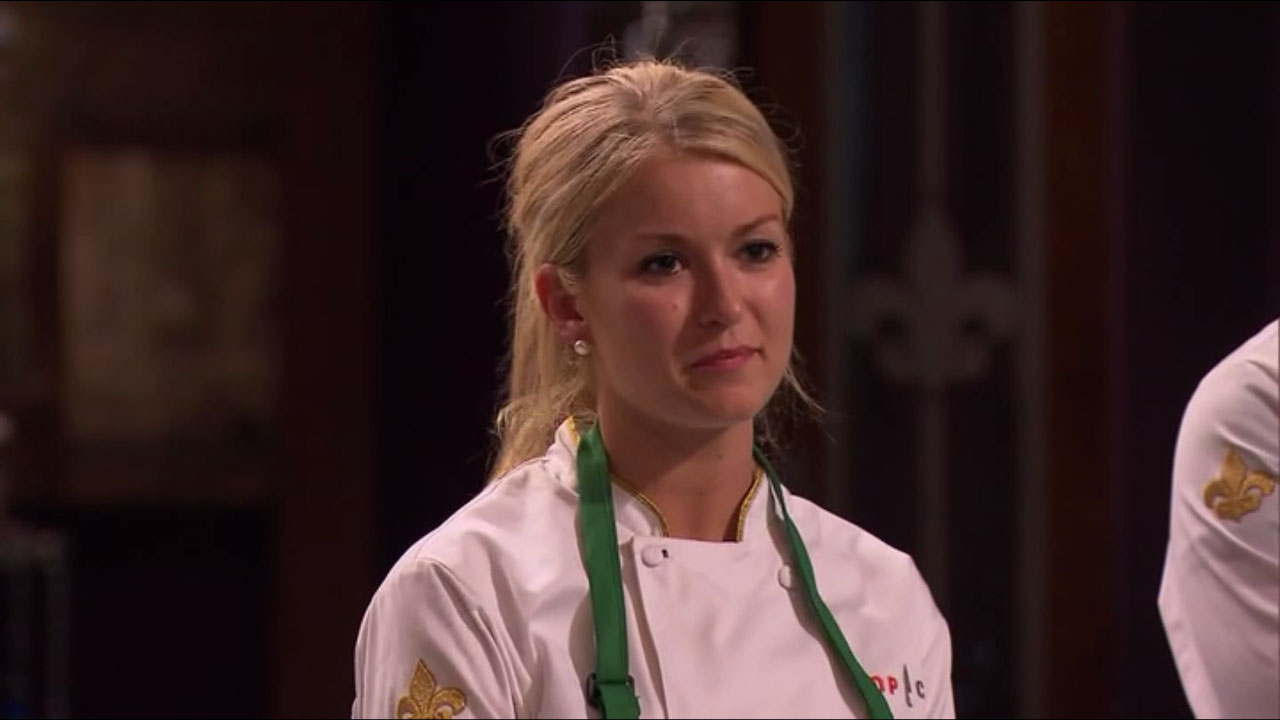 Tom's biggest issue is with the shrimp, so Janine is sent home. She's disappointed in herself and says, "Any fry cook from Hooter's can cook shrimp," and it's like, we get it, you're hot, stop finding ways to bring that up.

And speaking of hot, eliminated contestant Jason Cichonski is bartending on Andy Cohen's Watch What Happens Live, so I'm going to pour myself another mug of bourbon and fall asleep to his rhythmic hair-whipping as he makes mojitos for the cast of Million Dollar Listing.