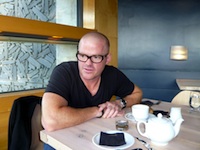 Rumors of British chef Heston Blumenthal opening a restaurant stateside date back to last year, and now he tells Bloomberg's Richard Vines it's not happening. For now. Said Blumenthal: "New York would have been great. The Mandarin is a fantastic hotel but we couldn't make it work because of the unions. Alain Ducasse has tried, Joel Robuchon has too." Blumenthal keeps hope alive by hinting at possible expansion to Australia and South Africa. [Bloomberg][Photo: Eater]