It's been a whole week in the real world since we saw Ramon get eliminated for his icy dashi (note to self: start an all girl indie rock band called Icy Dashi). Between last week's Judges' Table and now so much has happened, like the dissolution of the strongest marriage of our time. Yes, Kris Kardashian and Bruce Jenner are filing for divorce. But episode two begins only minutes after the first Judges' Table, so the chefs don't even know about this tragedy yet. I hope they can handle it.

It's 10pm in New Orleans. The rest of the city is busy taking advantage of the lack of open container laws, but the chefs are gearing up for their first Quickfire Challenge of the season. Padma Lakshmi announces that the chefs must prepare a classic New Orleans dish: gumbo. They have to start cooking at night so that the flavors have enough time to marinate. Apparently gumbo, like my ability to judge whether a one night stand is actually attractive or not, is better the next day.

The chefs are to create gumbos influenced by their own personal heritage. They all have such diverse ethnic and professional culinary backgrounds, so the gumbo variations are really endless. I'm Native American and Jewish, so if I were competing, I would craft mine to combine buffalo and complaining. 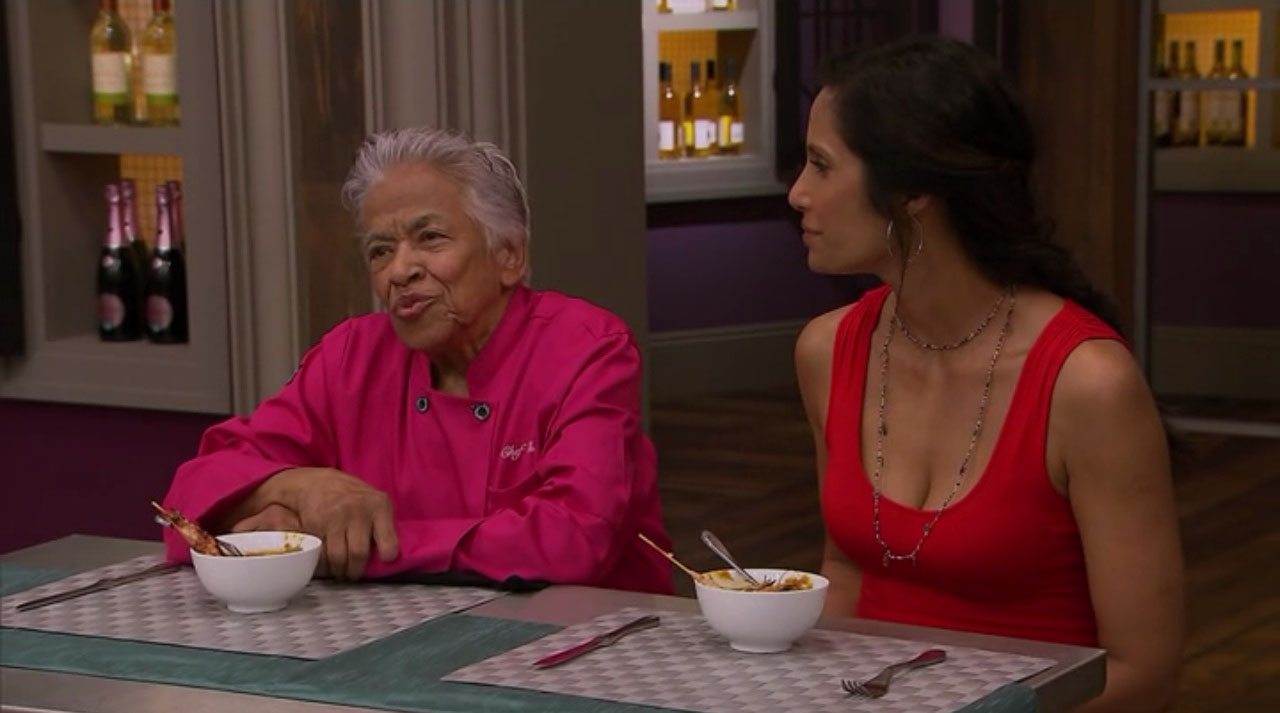 Famed New Orleans chef Leah Chase is the Quickfire judge. She's the owner of Dooky Chase, a restaurant name that made me laugh so hard I had to pause the show for nearly ten minutes. Also, if you couldn't tell, I have the sense of humor (as well as obsession with beef jerky) of an adolescent boy. The chefs bring their heritage gumbos up to Leah and Padma one by one, explaining the dishes and watching them taste them. The talking deep v-neck t-shirt named Jason Cichonski presents his, claiming that it's "a complete representation of me," but the gumbo doesn't have a Miley Cyrus haircut, so I don't know if he can really call it complete.

Throughout the Quickfire Leah reacts to the different interpretations. She refers to several of the dishes as, "interesting," which is like coming home from a date and saying, "He had a good personality." Michael Sichel explains how he started over late in the game to do something new. Leah tells him that perhaps he should have kept going down the road he started on and he would have ended up with something better. I'm thinking the same thing about graduate school right now, but, here we are. Ultimately, the winner of the Quickfire is Carrie Mashaney and her Iowa/Trinidadian gumbo. She has immunity for the Elimination Challenge. 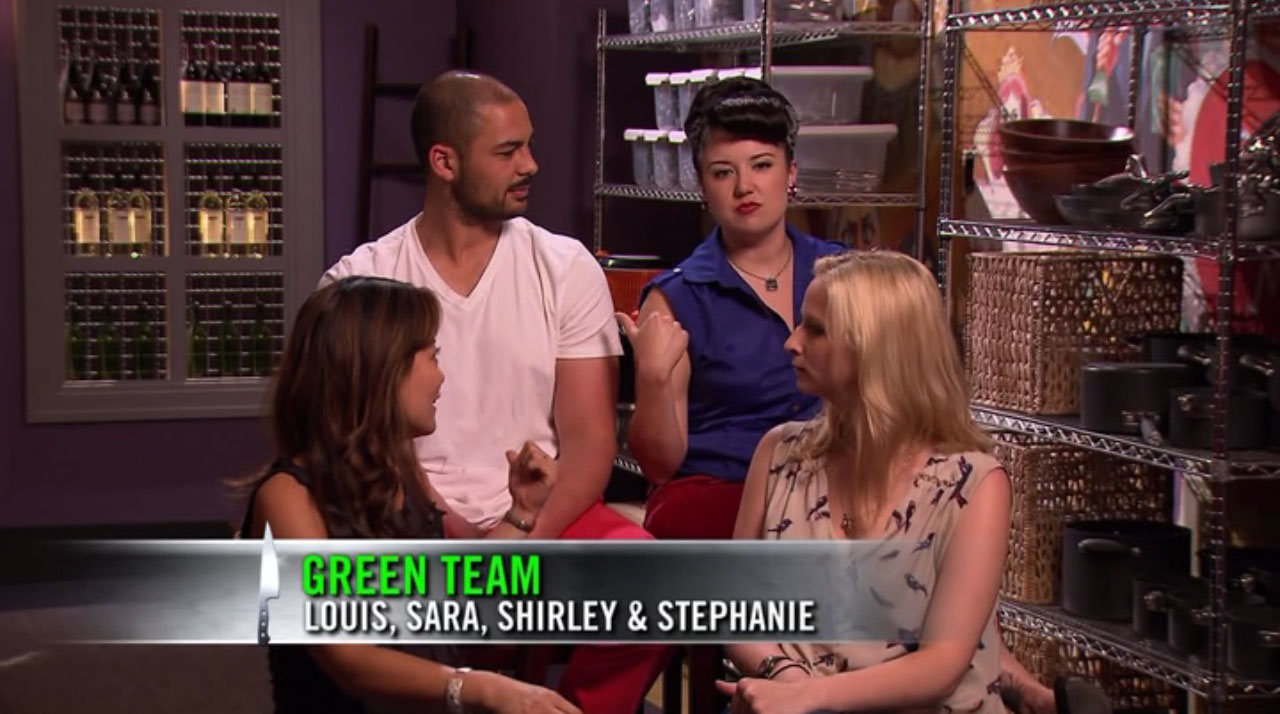 For the challenge, the chefs are divided into four teams that each must prepare dishes in food trucks at a Habitat for Humanity work site. Louis Maldonado is on the green team with Stephanie Cmar, Shirley Chung, and Sara Johannes. He claims, "I like a kitchen full of women." We all do, Louis, it's a great place for them. Honestly, it's a lot better than having a bunch of them somewhere like an accounting firm or the government.

As the red team is planning its menu in another truck, Janine Booth says she makes a really good white Bloody Mary. Look, I don't know a ton about proper cocktail names, but I'd guess that a White Bloody Mary is just a cup of vodka, and if that's the case, I've had enough of them to know that you can't really mess them up. I'm always in support of serving alcohol, but the customers in this scenario are charged with building houses, so maybe boozing them up during the day isn't the best idea. The people who will eventually move into these houses already suffered enough from Hurricane Katrina, they don't need to try and live in a shelter thrown together by some folks who had a solid afternoon buzz while mounting drywall.

Once the menus are set, the chefs are off to shop at Whole Foods. At least, the show says that it's Whole Foods. I didn't see a single twenty-something girl wearing her aviator sunglasses indoors while picking out hummus, so I can't really say for sure that it is, in fact, Whole Foods. Carrie asks an employee if she can get the biggest bottle of wine they have, which is the only real question there is when you're buying wine. However, she isn't buying the wine to drink it, she's buying it to use the bottle as a rolling pin for her empanada dough. 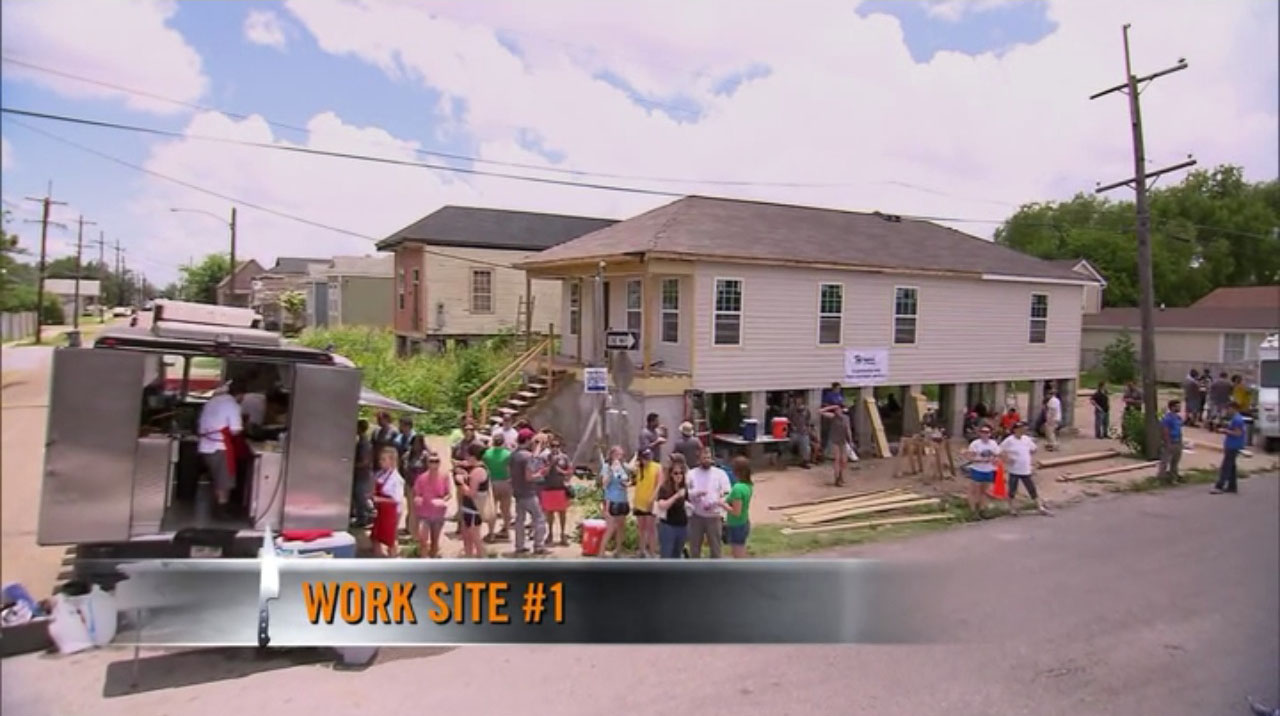 The Habitat for Humanity volunteers are a mix of mostly New Orleans residents who lost everything, plus a few kids looking to pad their college applications. (Good luck getting early acceptance to Wesleyan, guys!) It's so great that the city has maintained such altruism and optimism in the wake of Katrina. There's still so much to be done, but hopefully with volunteers like these, the city will re-emerge stronger than even before. Anyway, back to the food! The yellow team even brought exotic orchids to decorate their service station in the middle of this wasteland! 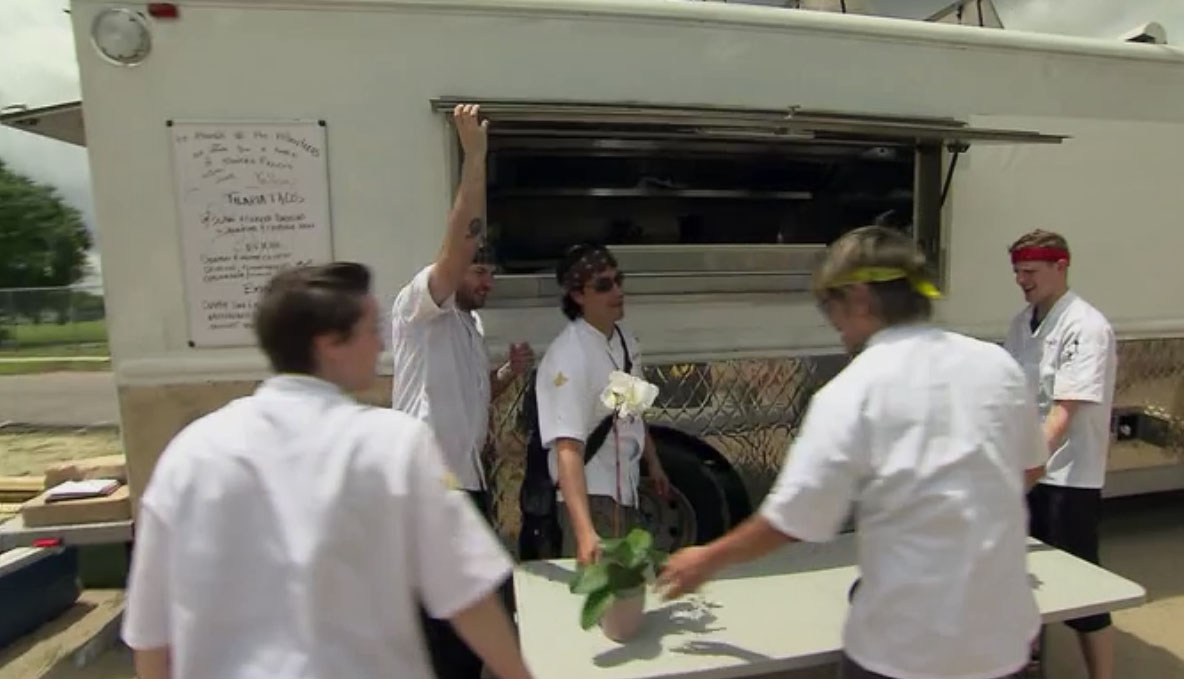 Jason (the long lost, sixth Backstreet Boy), pre-made all of his salmon hand rolls so that he can be front and center when the volunteers start coming to their truck. The women are flirting with him and he motions to his chef's coat and tells them, "I keep sweating through this, I'm surprised this isn't a Top Chef wet t-shirt contest!" But Jason, anything can be a wet t-shirt contest if you just try hard enough. In addition to his salmon roll, the blue team served grilled shrimp with melon and crispy wasabi peas, coconut ceviche, and a tuna slider.

It's usually hard to tell where a segment of Top Chef ends and an actual commercial begins, but there was one point where it was very obvious. Bravo teases us with a preview of the QUEER EYE FOR THE STRAIGHT GUY 10 YEAR REUNION. My 10 year high school reunion was supposed to be a year ago, but it was canceled due to lack of interest. That better not happen to this. 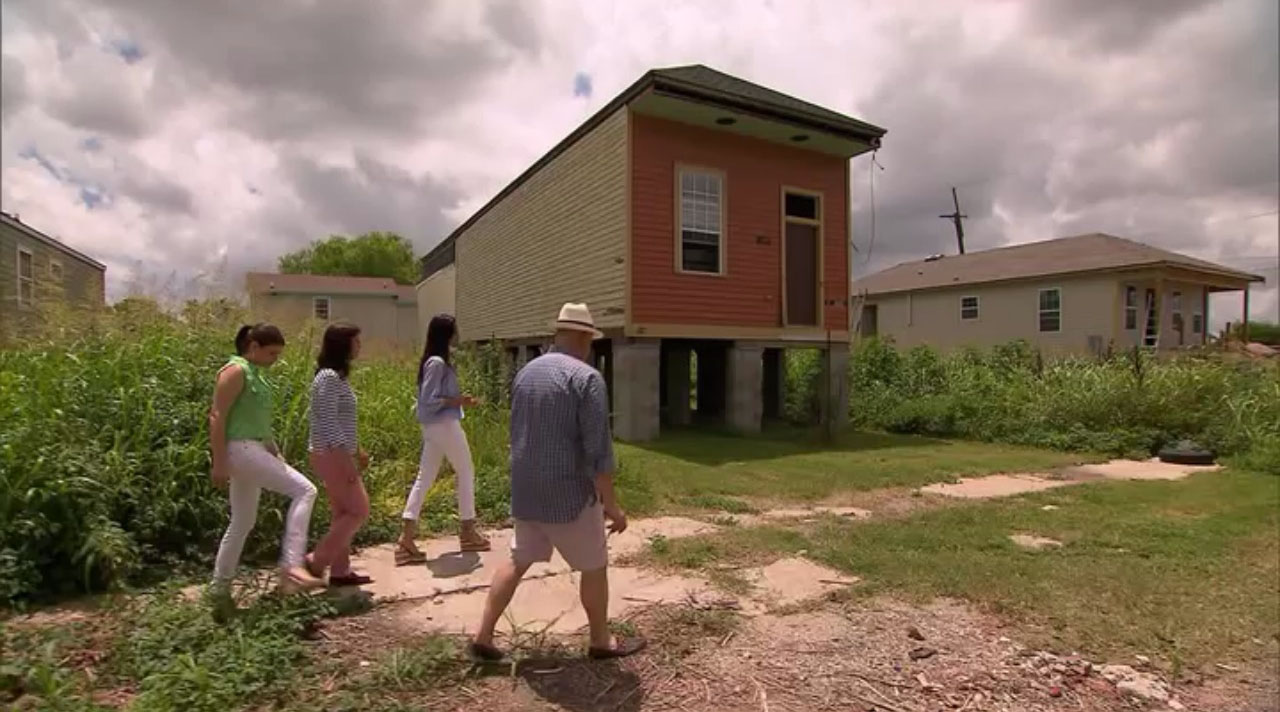 Judges Padma, Tom Colicchio, Gail Simmons, and New Orleans chef Susan Spicer make their rounds to the various trucks. First up is the red team, who serves lobster and crab fritters, a jerk chicken sandwich, ricotta and stonefruit with burnt honey, and gazpacho with pickled shrimp. Someone remarks, "There's nothing better than cold soup on a hot day." I disagree. There are so many things that are better than that. Like, almost anything. I've never been standing on a hot street corner in midtown Manhattan in August and thought, "You know what would be great right now? A nice cold bowl of soup." Never. Not once. Many things would be more refreshing in that scenario, like a chilled bottle of water or an industrial-sized garbage bag full of ice to get inside of. Cold soup doesn't even break the top 25.

The judges then reach the green team, aka, the kitchen full of women plus Louis. Their Mediterranean fare includes crispy chickpeas with watercress, a tuna burger, and spicy lamb salad. Sara tells Padma that Louis made the amuse bouche, which is a piece of watermelon on a stick. Great job L-Dog! You're a goddamn genius! Good thing he has that kitchen full of women. 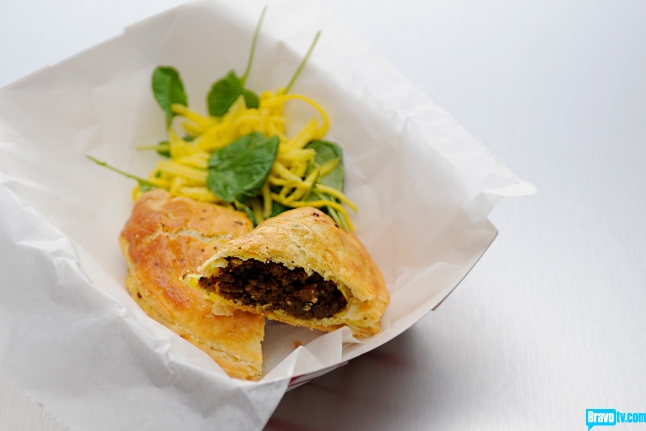 The chefs return to the stew room waiting to learn their fates. Padma comes in and announces that the yellow team is the favorite and their taco truck was a huge hit with both the volunteers and the judges. The winner of the challenge is Carrie for her empanada dough. I'm a big Carrie fan, so I'm psyched she wins both challenges in this episode. She has a really likable modesty that is rare for a reality star, and she is clearly a very talented chef. Also, Carrie, if you're reading this, I don't know what you ended up doing with that magnum of white wine you used for a rolling pin during the challenge, but I could take if off your hands, or whatever. 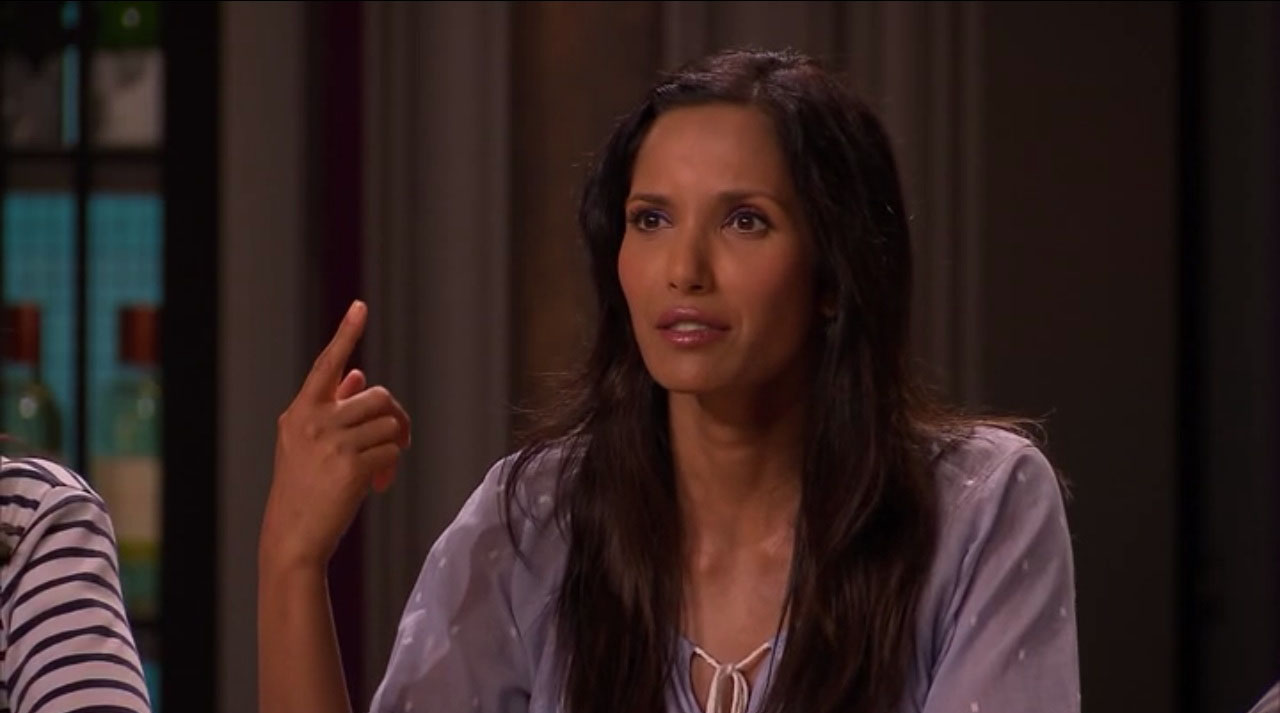 The team that did the worst in this challenge is the blue team. When asked how they think they did as a team, Brett answers, "Pretty well since they had enough food to last the whole day while the other teams ended up running out of lots of dishes." A dumbfounded Tom tries to explain that this was because customers went up for seconds from the other teams, and that's why they ran out of food. Padma tells him to, "Think about it," while motioning with her hand that the wheels should be turning. They are not.

One of the dishes that the blue team didn't run out of was Jason's mushy salmon hand roll. Had he not been so focused on being the "surfer dude" face of the operation and made his rolls to order as they are supposed to be prepared, his dish might have succeeded. The judges also found the wasabi peas a poor choice to top the grilled shrimp, as well as the ceviche to just not be cold enough. 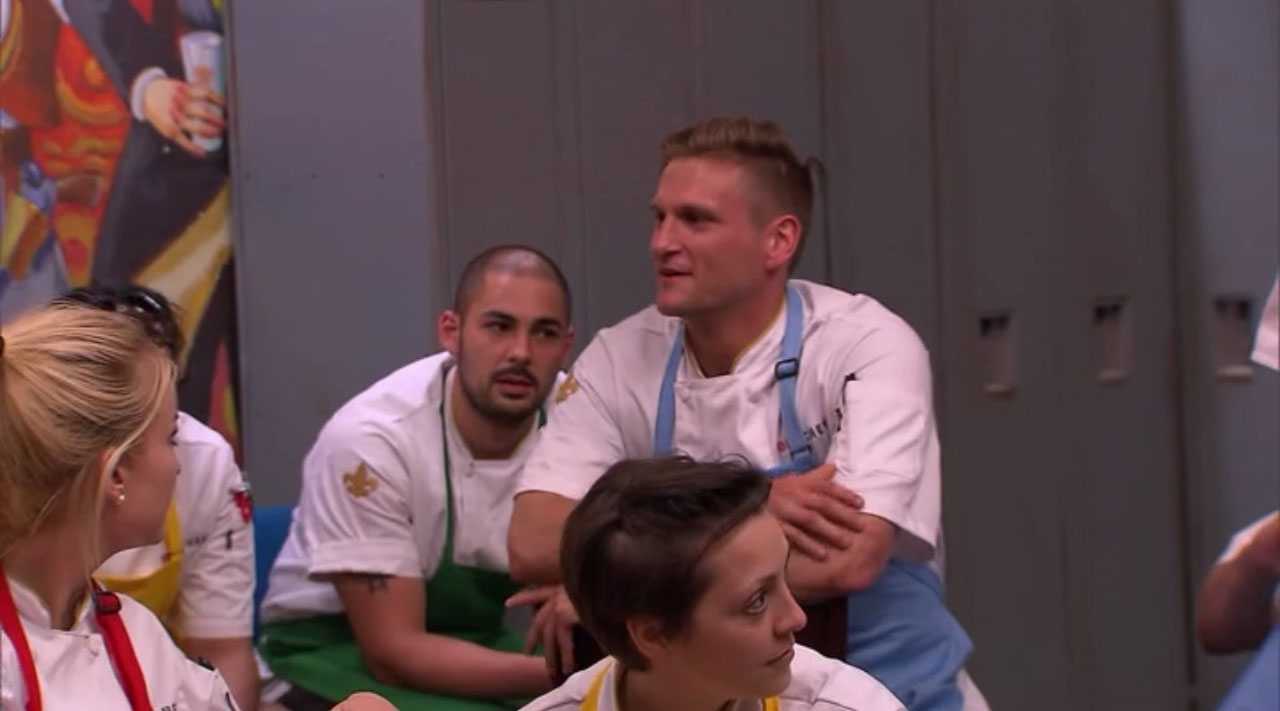 The judges deliberate and Jason returns to the stew room and sits on a backwards chair like he's pulling up a seat next to A.C. Slater at The Max. Reflecting on the challenge and his mistakes, he says, "Thinking about it now, I want to punch myself in the head." No, Jason, don't punch that beautiful head of yours. Everyone makes mistakes. Also, it seems hard enough for you to string a sentence together as is. Don't make it worse.

And while Jason didn't deserve a physical punch in the head, he got a metaphorical one in the shape of elimination. Yes, hair-whipping, Nordic-god-resembling, walking-mannequin Jason is the loser. Despite his claim, "I'm not the worst," Tom and company thought that this week he was. I can't remember if his home is Philadelphia or an Abercrombie & Fitch shopping bag, but wherever it is, that's where he's heading.