José Andrés at Harvard: 'The World of Gels Is Huge!'

Share All sharing options for: José Andrés at Harvard: 'The World of Gels Is Huge!'

Harvard University's third annual Science & Cooking public lecture series brings chefs from around the world to lecture on the intersection of science and cooking. And Eater Boston editor Rachel Leah Blumenthal is on the scene. This week: José Andrés. 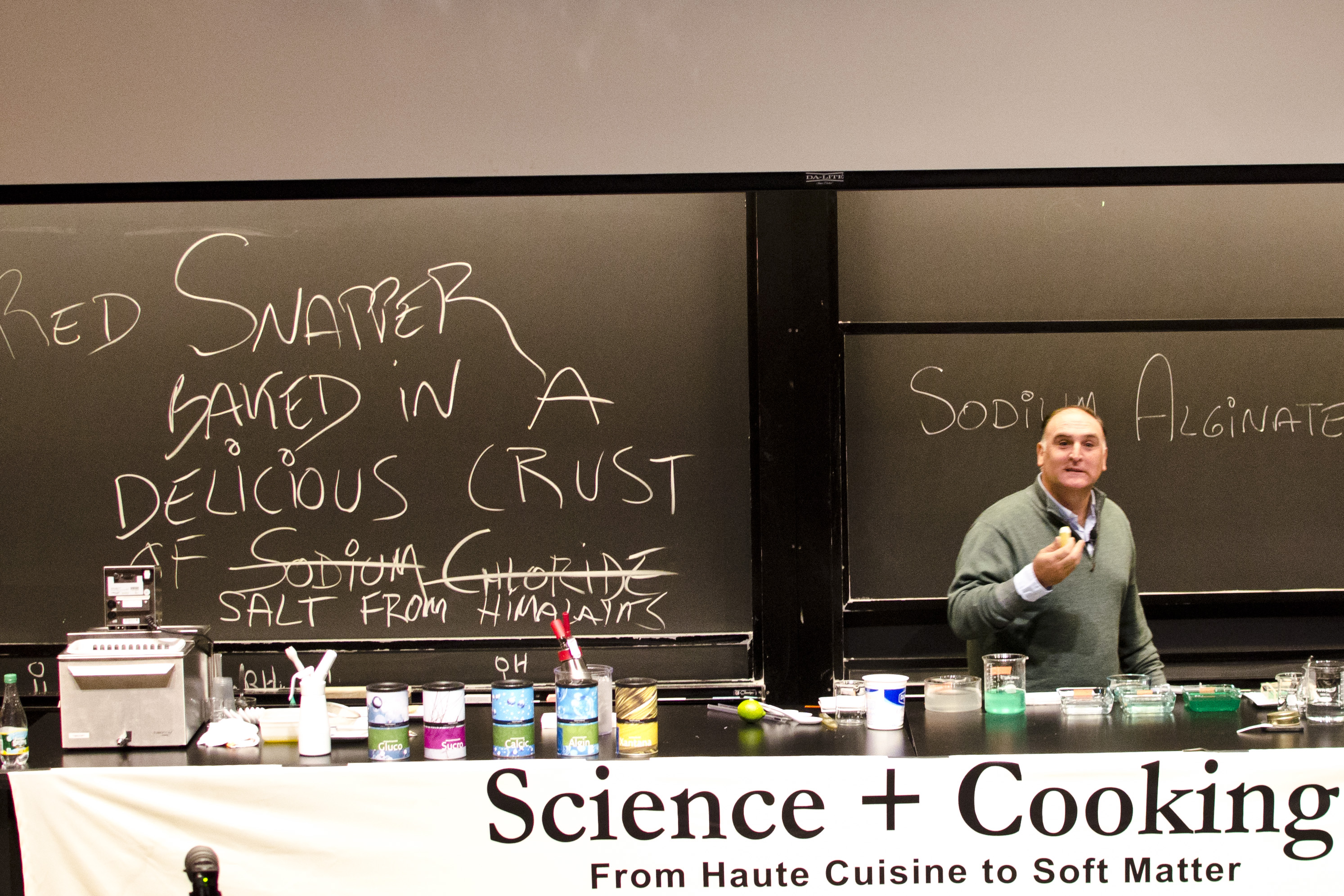 Washington, DC chef José Andrés stopped by Harvard yesterday to speak as part of the ongoing Science and Cooking lecture series. The subject at hand: gelatin (which he has lectured on before), or, as the talk was officially titled, "Diffusion and Spherification." Andrés, a Spanish native who plans to become a US citizen as soon as the government shutdown is over, famously trained under Ferran Adrià at elBulli. His experience there led to a penchant for molecular gastronomy, or, as he prefers to call it, "modern cuisine."

The term "molecular gastronomy" became a running joke throughout Andrés' lecture, which was the fourth event in this year's lecture series. (Last week, White House pastry chef Bill Yosses tied the history of electricity into a discussion of desserts and elasticity.) "Molecular" and other chemical-related words are loaded to Andrés, as some people automatically assume that cuisine in this vein is unnatural, perhaps even unhealthy. "People of America: we cook with real ingredients," he insisted. Andrés supported this point by providing a historical timeline of the usage of gels, both those created with animal- and plant-based agents.

Gels — liquids that behave like solids — "have been around forever," said Andrés, and there's "nothing more molecular than gelatin," an animal-based gelling agent. Back in Ancient Egypt, gel was used as an adhesive, particularly in the mummification process. Popular algae-based gel agar-agar was discovered back in 1658 in Japan, and the 19th century Daguerreotype process — early photography — used gels to capture images. And of course, there's Jell-o. So gels and gelling agents are actually quite common, Andrés demonstrated.

To understand the structure of a gel, picture a quantity of liquid, and now picture a three-dimensional net inside of it, composed of many threads that are cross-linked together. This "net" holds the gel together in what is essentially a collection of liquid molecules dispersed within a solid. There are different types of bonds within different types of gels, but in one common type, the "net" is formed by many polymer chains (such as proteins) linking together. While gelatin, derived from animal collagen, is perhaps the best-known gelling agent used in cooking, plenty of non-animal-based options are also available. "PETA, take a look!" said Andrés. "The world of gels is huge!"

Gellan gum, for example, is derived from bacteria. It's a particularly useful gelling agent because it produces gels that slice cleanly — "almost like you are cutting a diamond" — and can be heated, a property not shared by all gels. "What happens when you put Jell-o in the microwave?" asked Andrés. "They will call you a moron." Gellan gum can be found in many vegan varieties of gummy candies, and back in the late 1990s, it was also responsible for the weird little balls of flavor in the lava lamp-esque Orbitz soft drinks.

As evidenced by agar-agar and other seaweed-based gelling agents, the plant world is also useful for creating gels. Methyl cellulose, for example, is a plant-based gelling agent that is synthetically derived from cellulose from plants' cell walls. It's particularly useful in breads that don't contain flour. It's also found in nutritional supplement capsules as a vegetarian alternative to gelatin. And due to the fact that it's edible and non-toxic, it makes great special effect slime. (Yep, that's methyl cellulose in Ghostbusters.)

Gel comes into play in one of the most recognizable techniques of molecular gastronomy, spherification — the creation of a caviar-like globe of liquid encapsulated by a gelled skin. To kick off the demonstration, Andrés showed a video (see below) of the creation of his "Garden and Glass Salad," an homage to blown glass sculptor Dale Chihuly. The spherification of dried tomatoes begins at 55 seconds. Why dried? "We are making a better tomato," says Andrés. "Some might say, 'Why are you playing God?'" But it's not about playing God. It's about trying to be a good cook and pushing the envelope. "Hopefully a tasty envelope." 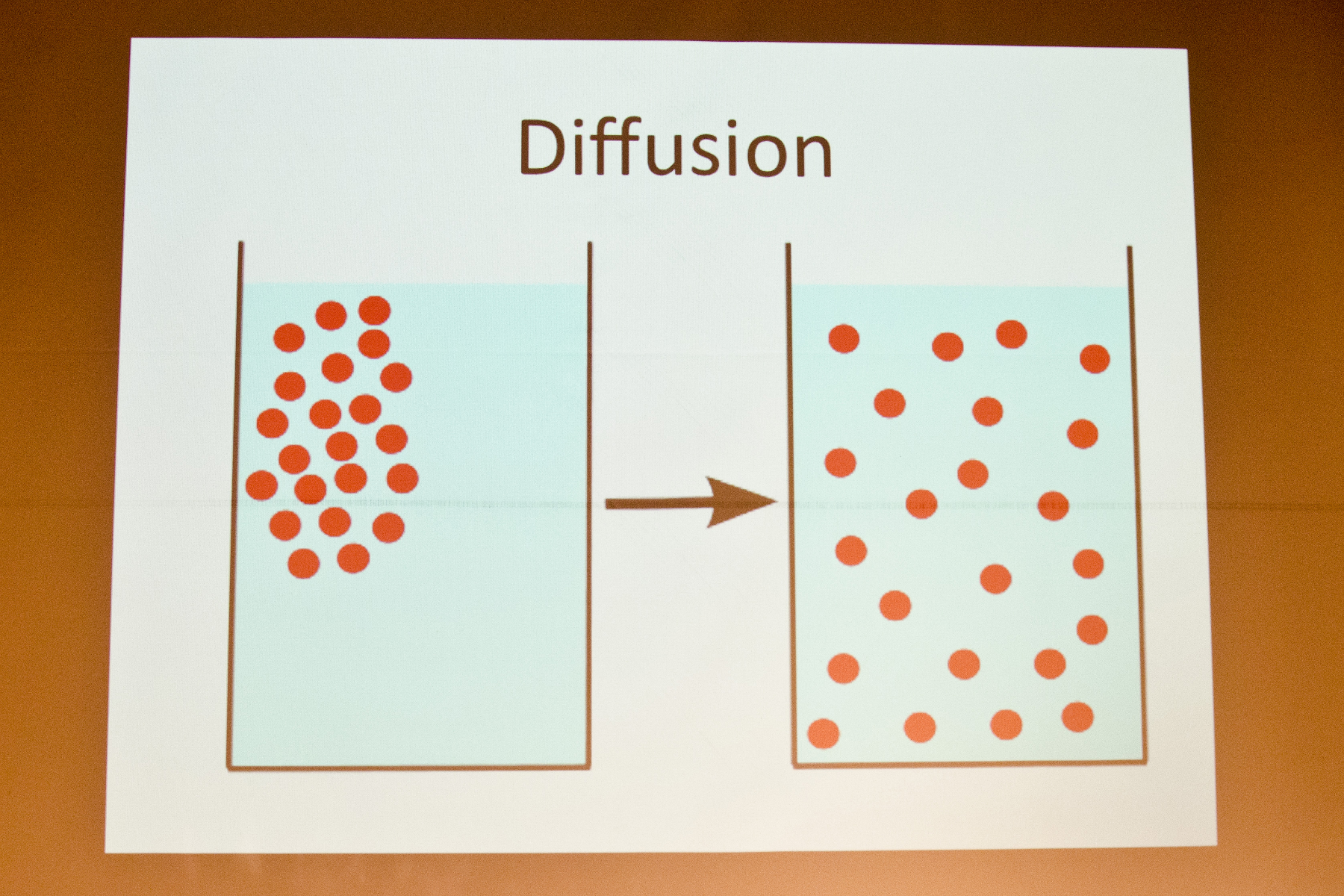 The process of spherification depends on diffusion, the random movements of molecules in a fluid. Or to put it as a human analogy, it's "what's happening in Congress right now," says Andrés, on the eve of the government shutdown.

Spherification involves two main components: sodium alginate, a brown seaweed-based gelling agent that is good at thickening water, and calcium chloride, a salt of calcium. When the sodium and calcium ions encounter each other in a fluid environment and interact, the alginate "shake hands" with itself, said Andrés, forming a gel-skinned sphere. Picture again the aforementioned cross-linked "net" that makes up a gel. Here, it's alginate polymers that are linking together. 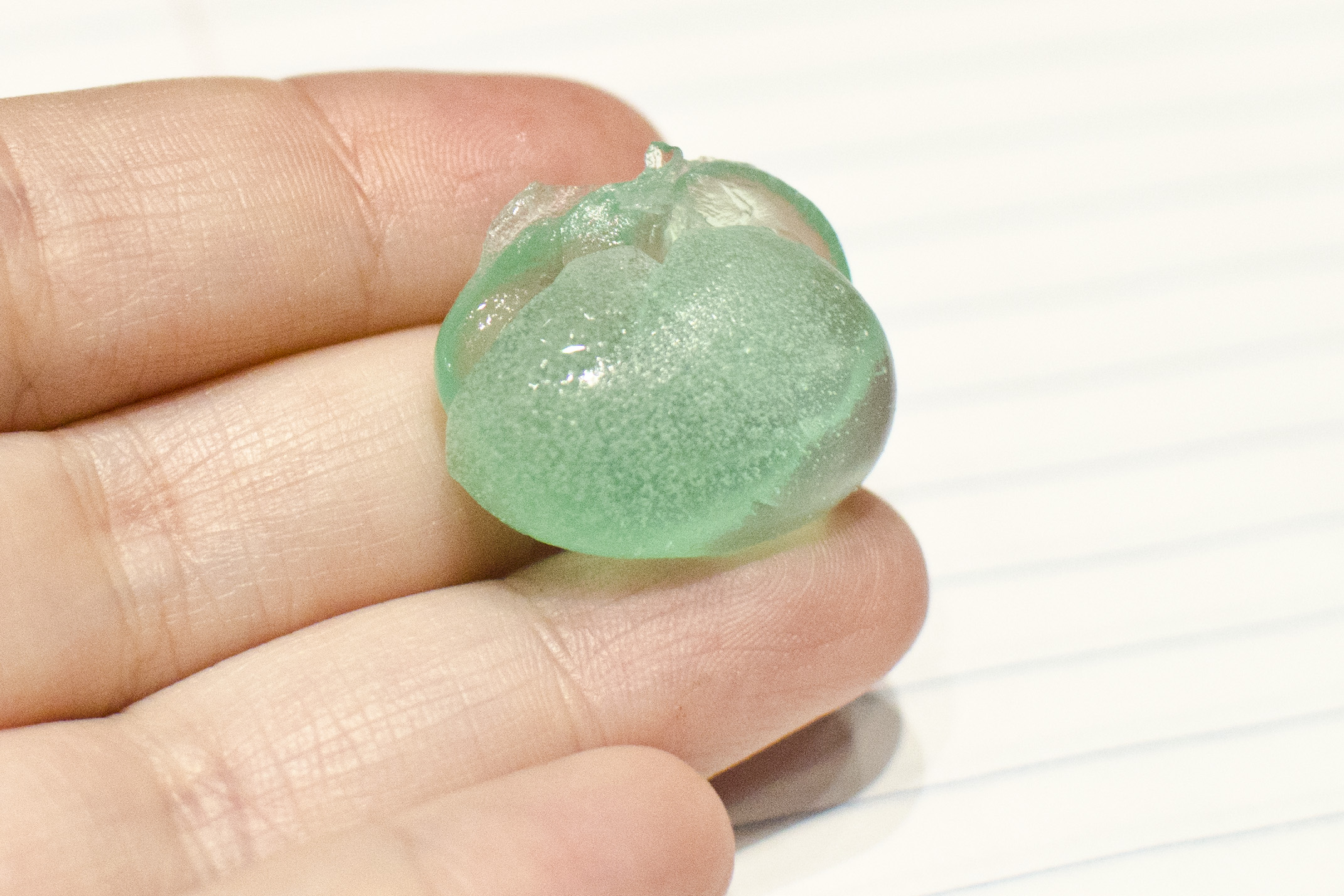 In inverse spherification, the equation is switched so that the calcium is with the material to be spherified, and the water bath has the sodium alginate. Chefs quickly realized that calcium chloride doesn't taste very good, though, so the more neutral calcium gluconolactate is preferred. (To those who see these words and assume that this process must be unhealthy, Andrés said, "People, do you taste baking powder? Do you love your muffins?") Now, the spherification occurs from the inside out as the calcium ions diffuse out of the blob of spinach water, or whatever the ingredient is that's being spherified, and the process ends when the spheres are removed from the water bath.

So, why spheres? "The mouthfeel — it's astonishing," said Andrés. Would you rather drink a glass of water or a sphere of water, he asked. Spheres give chefs the opportunity to mix a variety of ingredients into a single explosive bite. One could spherify an oyster with its own juice, for example, or a mojito, complete with carbonation. It's even possible to put spheres inside other spheres, mimicking things like eggs. In the video below, Andrés creates a dish that resembles eggs and migas, but the eggs are made of spherified cheese. 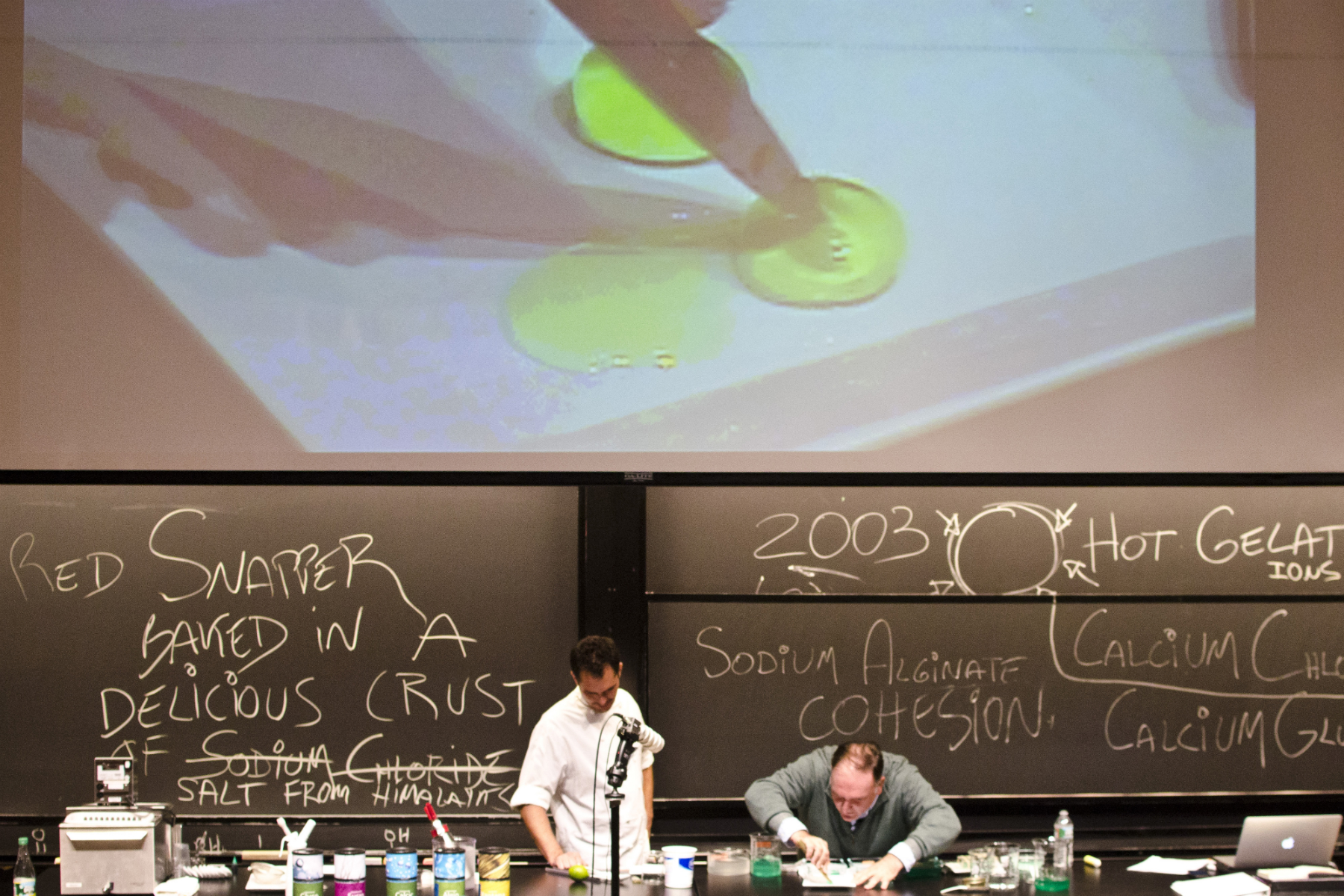 Molecular gastronomy gets a bad rap from those who want to return to basic whole foods, eschewing processed goods and chemicals as much as possible. But to Andrés, combining science and cooking isn't the futuristic nonsense that some make it out to be. Ferran Adrià, who is largely responsible for pioneering techniques like spherification, "didn't think forward," said Andrés. Instead, he thought backwards to look for answers, and found science. Even for diners enthusiastic about the results of these techniques, many don't actually want to know about the method. In presenting his version of Adrià's popular olive spherification, Andrés used to explain the process but now just tells people that he owns the "only liquid olive tree in the world."

This extends to more traditional cooking as well. A chef wouldn't present a roast chicken, said Andrés, with a cheerful, "Oh Madam, do you know about the Maillard reaction?" With techniques like spherification, the audience is ready to be awed by the results but not the scientific process. "Sometimes people are looking more for the beauty of the story than the truth of the story," said Andrés.