On a whirlwind tour of dinners in December, from the Twelve Days of Christmas at the Restaurant at Meadowood, to The French Laundry and Next: Kyoto, photographer, blogger, and regular contributing writer Bonjwing Lee stopped in at Curtis Duffy's newly opened Chicago restaurant Grace last week to give Eater a first look at this much-anticipated restaurant. 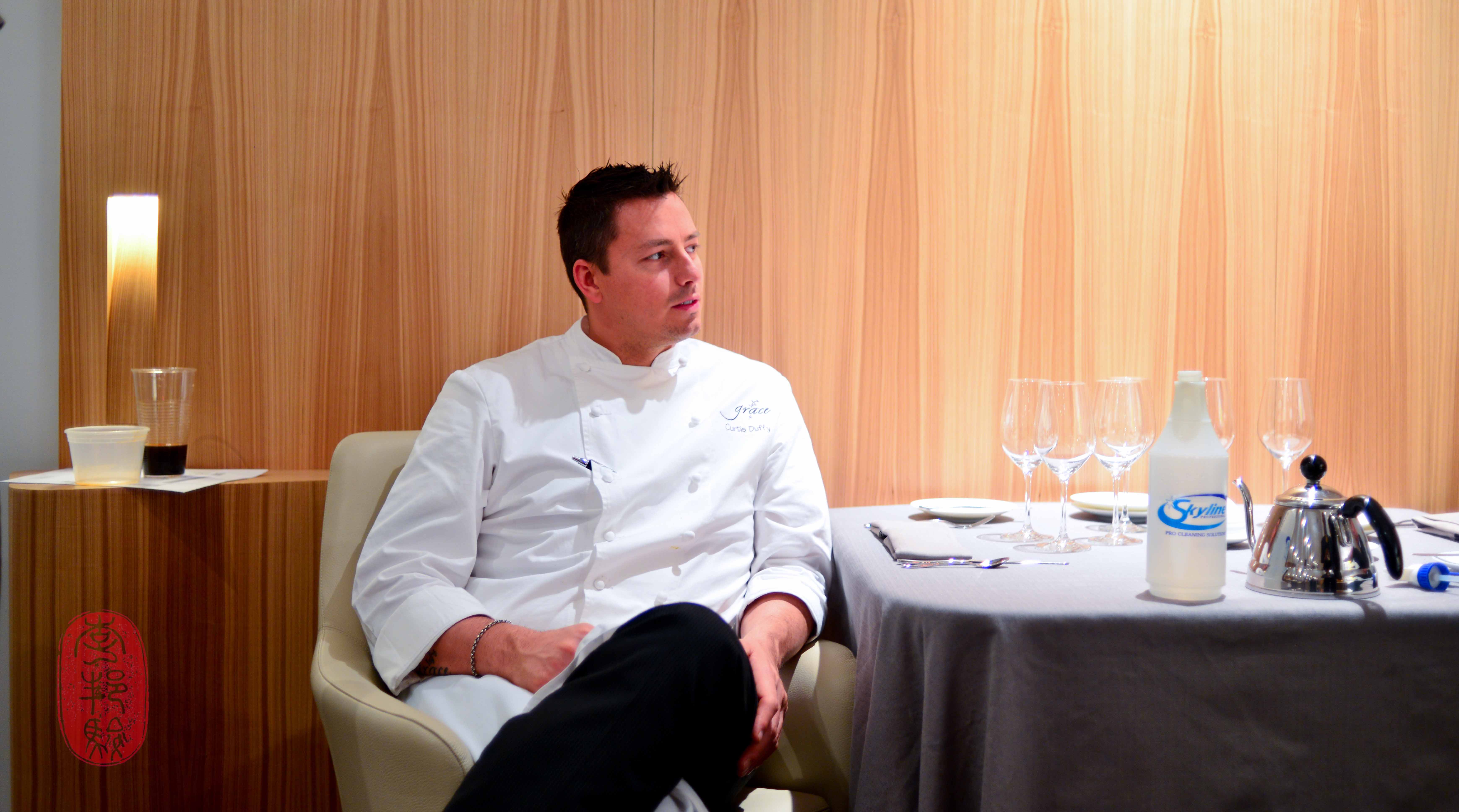 I don't remember who said it, but "long-gestating" is an accurate description for Grace, a restaurant that was originally supposed to open in the fall of 2011. My three-part series covering the opening of this restaurant for Eater, alone, spanned five months. The first part published in May of this year, and the last one in October, still two months ahead of the restaurant's eventual opening. Grace finally served its first dinner to the public on December 11, 2012.

But luxury takes time. And that is exactly what Curtis Duffy, who had earned two Michelin stars at the now-closed Avenues at the Peninsula Hotel, and his team at Grace hope to offer at 652 West Randolph Street in Chicago's quickly exploding restaurant district in the West Loop. 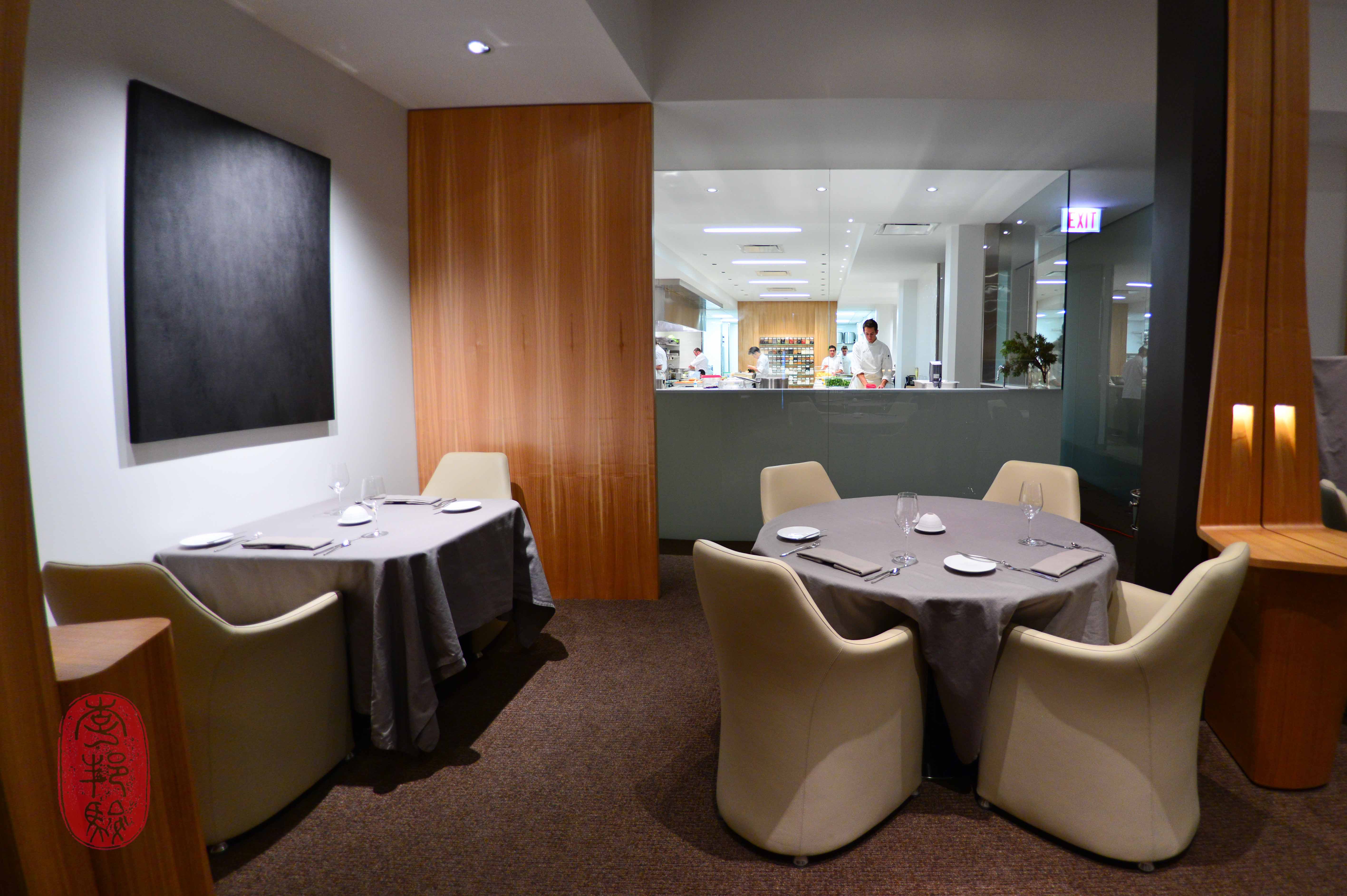 The Look and Feel

Having only seen blueprints and heard first-hand descriptions of Grace, I found the interior to be configured, more or less, the way I had imagined it. The restaurant is much longer than it is wide, with a small reception area at the front on the left, and a lounge to the right. Leading back to the dining room, the restaurant is flanked by two hallways. The one on the right, which connects the lounge with the dining room, is where you'll find four bathrooms, each one inspired by one of the four seasons (my favorite is the all-white "Winter" one). In the middle of it all is an enclosed wet bar.

The dining room is open and wide, a generous sea of tables dressed in thick, beige linen. The walls are trimmed in honey-colored wood. The millwork is fine, smooth, and clean. It's sleek, yes, but it's softened by thick, padded carpeting, and sloping curves. The chairs as well, upholstered in hand-sewn leather, are plush and comfortable. With all of the service stations located off the dining room floor, the room is particularly quiet during service.

Every table has a view of the kitchen at the back of the restaurant, which glows through a glass wall. To the right of the kitchen, behind frosted glass, is a private dining room which seats up to a dozen.

What will surely become the visual icon of Duffy's kitchen is an eye-catching spice rack set into the far wall. Trimmed with that same honey-colored millwork you'll find in the front of the house, it pops in technicolor against an otherwise bright-white space. The walls are lined in white subway tile and the counters are topped with shiny slabs of white stone.

In the cavernous, sub-street level of the restaurant, there are employee locker rooms (one for the gents, and one for the ladies), an unfinished employee lounge area, wine storage, and a laundry room where staff members wash and iron linens and uniforms. 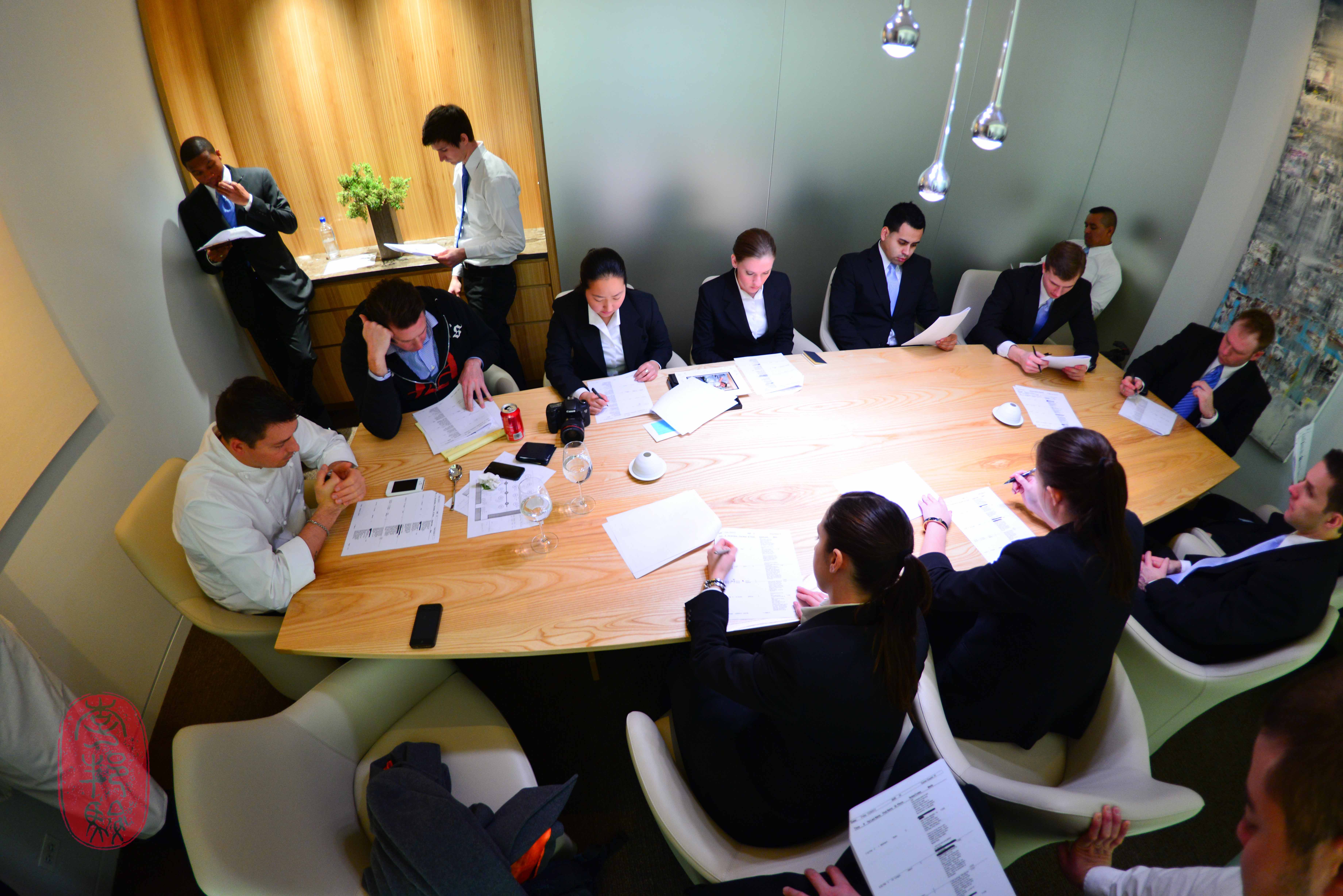 From Avenues, Duffy carried over six staff members to Grace.

Michael Muser, who I introduced in my last report on Eater, is the general manager and head wine director.

In the kitchen, Nicholas Romero is the chef de cuisine, and Bobby Schaffer is the pastry chef. Sous chefs Dan Bark and Mitch Lienhard have stayed with Duffy through the transition as well.

In the front of the house, Amy Cordell alone, has come from Avenues. She leads a team of about ten servers.

The kitchen staff arrives in the late morning and preps until four o'clock, by which time, the front of the house staff has arrived. The kitchen is cleaned, and everyone pauses for staff meal (the day I was there, they served braised pork, salad, and fresh bread, baked by the restaurant's in-house baker, Chad Simmons).

After staff meal, Muser leads the front of the house line-up in the private dining room. Together, he and the front of the house staff discuss service issues and thoroughly run through the night's reservation list. Every table is reviewed for allergies and prior history with the restaurant. Duffy and Romero note menu changes for the night, and provide information on ingredients.

For the first two weeks, Duffy limited reservations to ease the staff into a full service. Now, the restaurant is filling all sixty seats nightly.

Grace offers two tasting menus that range from eight to twelve courses. On the left side of the page is a vegetable-focused menu, which is not a strictly vegetarian (although vegetarians will be accommodated upon request). The right side of the menu celebrates a wider variety of ingredients: vegetables, fruits, seafood, and meat. Both menus cost $185.

Duffy has never made the locavore crusade his beat. Opting instead to use the best ingredients available to him — which means that he cooks with ingredients that are in-season — he has written a menu that showcases products from all over the world. The opening menu is decidedly wintry, full of root vegetables and braised foods. And his pantry is as wide as the imagination with which he has woven a web of culinary connect-the-dots on this inaugural showing.

You will find everything, from luxury ingredients, like Iranian osetra caviar, served with kumquat jam (the first course on the right side of the menu), to humble veal cheeks, served with black grapes (the main, meat course lower down on that same side of the menu). And, of course, you will find herbs, like African blue basil, which pastry chef Bobby Schaffer is using to garnish lime-infused young coconut with huckleberries (a dessert on the vegetable-focused menu to the left). Duffy uses herbs – often, instead of salt, sugar, and spices – to season dishes. To draw attention to them, herbs appear on the menu in all-capped letters, as they did at Avenues. This has become Duffy's culinary trademark.

Luxury isn't missing on the tables either. Both the still and sparkling waters offered to diners are run through the high-dollar Nordic filtration system. I love the flatware, which is trim and smart, with gentle curves. I don't know how much Duffy spent on china, but his plates, as well — many of which I recognize from top tables in Europe — are stunning.

Simmons bakes up to ten different breads daily, including two that are gluten and lactose-free. Some of the bread is paired specifically with certain courses (for example, I was served a hibiscus brioche with a chilled scallop around which was poured hibiscus broth).

Duffy served my guest and me dishes from both menus. I have posted photos of my meal at Grace, as well as some additional interior shots.