Mario Batali on Mistakes, Critics, & Trying Not to Be Cool

Share All sharing options for: Mario Batali on Mistakes, Critics, & Trying Not to Be Cool 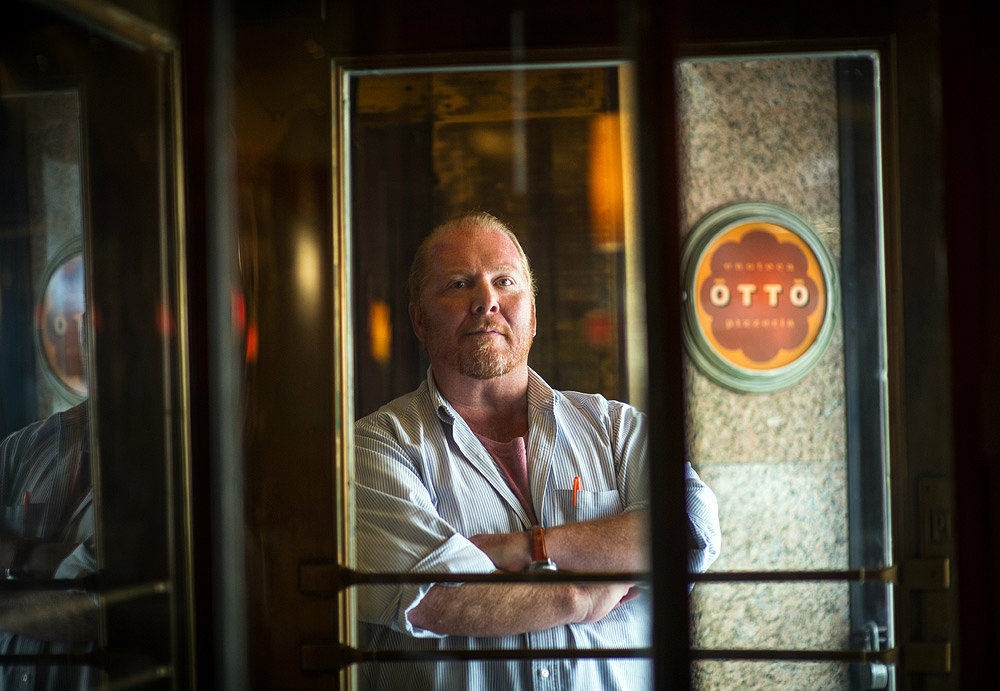 "Mario always likes to be at the farthest seat of the bar," said one of the hostesses at Otto as she and another staff member, presumably in training, ushered me to the counter where the aforementioned man — last name Batali — would sit down for an interview. You can see everything from that chair. At exactly the appointed time, the chef emerged, ordered a macchiato, excused himself to greet a few customers, and sat down to talk about his nineteen restaurants and 3,000 employees.

Batali was, as expected, personable and polished, able to jump into an eloquent answer without any stumbling or visible indications of doubt. He's done it many, many times, and it's a skill that's helped make him the megastar with TV shows, cookbooks, endless press, and friends the likes of Bono and Gwyneth Paltrow. But he was also candid, willing to talk about mistakes and lawsuits and the fact that his seminal New York restaurant Babbo can seem "a little dicky" at times. As he describes in the first part of this interview, he wants to adjust that perception across all of his businesses and, at this point in his career, build a restaurant group that's essentially run by the talents he and partner Joe Bastianich have fostered over the years.

The word "empire" is a tad odd when what we're talking about is restaurants...
Yes, the Romans were so much better at it!

I'm not sure what to refer to it as, but my first question is whether one decides at some point that they want all of this stuff to be going on.
No, it was definitely never our intention. It was more the feverish inability to turn down what seemed like a really good deal at the moment. And that happened a series of times. The reason we build more restaurants is because, as each restaurant gets as good as it can be, certain number two chefs and maitre d's and wine people clearly have amassed enough information to be the number one of something else.

That's how most restaurateurs seem to describe it.
We really try to keep this place so that they don't end up going to Danny Meyer or David Chang. The restaurants evolve not as a manifest destiny to take over the niche or the price category or the style, but more so we can keep good people working for us. Even though Jason Denton left, he was the first guy we did that with, when we opened Lupa. Then we did the same thing with Mark Ladner here, and he's still part owner of this, Lupa, and Del Posto.

The constant push seems to really get you off, no?
As much as each one was a very enjoyable success for me and Joe [Bastianich] — to see this great idea turn into something — I'm enjoying more, at this point in my career, the successes of the guys who are stepping up and moving forward. As probably counter intuitive as it seems, our goal at this point is not to sell them to some private equity firm and then move on. Our goal for the next ten years is to identify those people that can step up and effectively give the restaurants to them.

How would you characterize your working relationship with Joe?
Joe and I both have different levels of expertise, but we both know about each other's worlds. Joe is not shy about talking about food. Joe has one of the most evolved palates I've ever seen, and culinarily and ideologically he's one of the most correct technicians that I have ever worked with. At the beginning of Babbo, for instance, he was a huge part of designing the menu. In the same sense, when I wanted or didn't want to comp people or I wanted to play the music loud, Joe didn't get in the way. I think the reason we have a relationship that's lasted this long is that we're confident in our own powers. So when I think about our presence in China or expanding Eataly in North and South America and possibly western Europe, I love it.

When has the shit ever hit the fan? What's a major mistake you can pinpoint?
Me, David Pasternack, and Joe opened what we thought would be a great little French bistro.

Bistro du Vent?
Yes. Dave had cooked a lot of French food, but it still didn't feel as legitimate as our other experiences. And that's why it's the only one that's ever closed. The food was great, but I didn't like the look of it. That's my fault, because I should have been there in the construction phase and I wasn't. By the time we got to the end of it, it didn't feel like anything we wanted to put our names on.

I wanted to ask you specifically about a few of your restaurants. Let's start with Babbo, which you just mentioned. Do you pick up on the fact that some people see it as a self-consciously cool place that can alienate? It's a pain to get a table, there's a bit of attitude...
I think what Babbo did for a lot of people, most particularly us, often too much — I was always in the kitchen and I was always the chef, and for the first two years I elevated the practice of saying "no" in a field where almost everybody said "yes." It wasn't to be capricious or cool or standoffish or whimsical or try to divide ourselves, but rather to say that we spent a whole mess of time curating the lighting, the plating, the food — every aspect of this experience — so that when you tell us that you want to change this or that when you come in, we tell you that we really don't want to do that. It turns out if I'm not there and I'm not expressing the "no" the way that I want it to be, it can sound a little dicky. Now that I have 19 restaurants, it's something I'm very aware of.

Across the board in the next year, we're really working on how the industry perceives us. If we can soften those edges and be a little warm and fuzzy — I'm not saying we're going all the way to Danny Meyer — we can still present what we want. We'll still be pure and ourselves, but we need to figure out how to say "no" only after saying "yes" three times. And that's effectively our hospitality midstream change. We are definitely trying not to be cool. We're trying to be perceived as purveyors of the most unique, original, and informed-by-Italy experience you can find.

Now to the Del Posto saga.
Saga is an excellent way to look at it. Truly Homeric.

Mark Ladner recently did an interview with us, and I'll put to you a similar question I put to him: how do you feel about the criticism that Italian food doesn't belong in that context?
I would say that that is exactly what Italian restaurants were like in 1976. You would have never thought that anybody should wait in line for a pork bun twenty years ago, though. Or a bowl of ramen. Or would you have ever thought that there would be a restaurant with no backs to the chairs with two Michelin stars? The whole blurring line with what people have always associated with comfort food, and the other side of that which is intellectually provocative food, have changed a lot, particularly since Michelin got to New York.

I would say that Del Posto is the most thoughtful expression of Italian food in New York. That's what's going on in Mark Ladner's kitchen. It is somewhat jarring sometimes, but that's maybe what it was like when you had that first caviar made of mango [at elBulli].

And finally, how did you react to the Lupa review in the Times, which was effectively a takedown? The place finally gets the review everyone was clamoring for, and it's not a home run.
It's always easy when they use an interim critic to say that is the mistake. I was very disappointed in that review and I still stand by the restaurant. It did so well without any stars for so long, so this doesn't really affect its performance nor its experience. That said, the value of the critic is important and we sat down and evaluated everything. I don't think we changed anything, though.

The guy had a bad experience. I get it. He got shoved to the back of the line, and he had the same experience that a lot of avid readers of Eater would probably be happy to withstand outside of Pok Pok. Sorry, we weren't as groovy as we hoped or as hospitable as we always plan to be. If for some reason he got stuck behind some woman's elbow at the bar, I'm sorry. At the end of the day, there are a lot of restaurants at that price point that are hipper right now. But our job is not necessarily to be this week's pop-up with René Redzepi. It's about how much tradition we can pack into a small place while still serving a $14 pasta. That's what we do there.

So you didn't see the review and immediately scramble to set certain things right?
No. We are definitely not above that, though. But we know what we know and we know what we are. I know it's busy and crowded sometimes, but we're not going to move to a giant new space just for that. It is what it is.