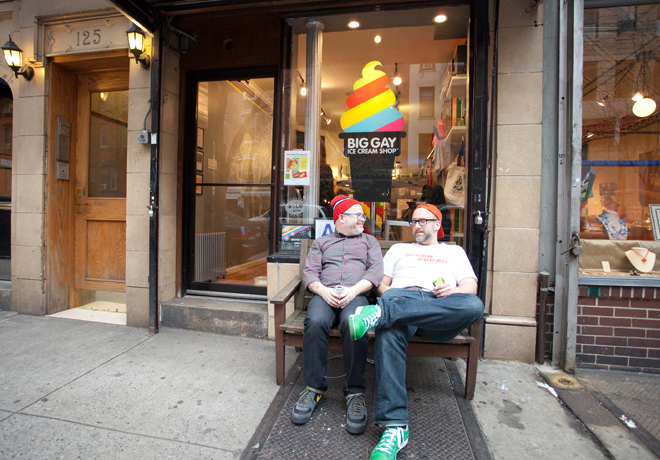 Everyone's favorite unicorn-obsessed, Top Chef Just Desserts recappers, Bea Arthur-slinging ice cream truck/shop has a book deal: New York City's Big Gay Ice Cream Truck has a book coming out from Clarkson Potter in 2014. And this won't just be a straight-up cookbook, either. Owners Bryan Petroff and Doug Quint have plans for a yearbook concept; as Quint tells Eater below, "a four 'year' course on making ice cream," with stories from the ice cream truck frontlines. (It will also be "full of doodles and other silly crap.") Below, Quint explains their plans for the book:

So tell me about your book.
It's pretty funny, when we were at South Beach Wine & Food in January, we were approached by different publishers down there. We had started working on a book deal last year, and honestly we realized we needed to wait until our store was open. First of all, it felt like it wasn't quite the right time to write a book because the story was still writing itself a little bit. We were in the middle of trying to move out of just being a truck. But also recipe-wise, we were making all this stuff at home but we weren't really serving it to people yet. I couldn't serve this stuff on the truck. So now a year into having the store and a year into serving this product, we felt like cookbook-wise it was the right time to really go ahead and do it.

So when people started approaching us at South Beach, we thought okay, we're really going to make a proposal that reflects the book we want to write. Instead of just writing a little treatment, we thought okay, we have Donny [Tsang], our photographer, he's been shooting us since the first day we went out. We're going to integrate some of these pictures into the book proposal so everyone know that's part of the deal. We really wanted Donny's stuff in there, we didn't want to shoot cookbook photos, we wanted his catalog. So we started working with Rebecca [Marx] on writing a little bit with us because we love the idea of a real writer/project manager integrated into it from day one. So Rebecca came in. And also graphic designer [Jason O'Malley], the guy who did our logo, did the layout for the proposal. So we put together the team that we wanted to have working on it, and we shopped it around, and within a couple days we were approached by Clarkson Potter. They said, we really want this thing and we looked at some of the cookbooks [editor] Emily [Takoudes] has worked on personally. They're a great publisher, they found us a great editor, we met with them and they said we really like the yearbook concept. We really hit gold.

What's the yearbook concept about, exactly?
Well, we've been around for four years. One of the things that we really wanted to approach in the cookbook aspect was that a lot of ice cream cookbooks start with the very hardest thing first. The most daunting thing for a lot of people is making custard. So we came up with a concept that turns it around into a four "year" course on making ice cream. The first year out, you're really just making sundaes with store bought stuff. The second year, you're making sauces. Third year, you're making ice cream not from custard. And then fourth year you're going full hog.

It also gave us a really fun way to break up the book into clubs. So like automotive club is stories about the truck itself. Health club would be about say serving gluten-free options, things like that. There are a lot of fun ways if you look at a yearbook to codify what group you're in.

And it's going to include illustrations as well as photography?
Yes, it's going to be full of doodles and other silly crap, in addition to the really awesome stories. Some of the stuff is pretty shocking.

Shocking?
Weird things go on in the streets. You know? I know how to recognize undercover cops now. You know, stuff like that. I've had to pour diesel straight onto the engine cap in the middle of Sixth Avenue. Weird things have gone on.

So will the book be mostly stories or mostly recipes?
Well, it's not going to be a linear story of the ice cream truck. It's not a tell-all. It'll be enough stories that it'll be a book and not just a cookbook. I think that the best cookbooks right now are things like The Art of Living According to Joe Beef. That is such a great integration of stories and cooking, and stories through cooking. If I had to pick one book that really made us think we have to write a book, it's Art of Living. And I think we really identify with [Joe Beef chef/owners] David [McMillan] and Fred [Morin] too because they're such freaks who just love what they do, and they've found a way to marry their insanity to their business. And that's kind of where we're at.

And it's coming in 2014.
Yeah, it's due to the publisher in the Spring. So our first order of business is to finalize the order of recipes so that we can start getting them tested. And then sit down and really make sure these stories get told.