Dieselboy on Great Meals and Cooking With Alex Stupak

Share All sharing options for: Dieselboy on Great Meals and Cooking With Alex Stupak 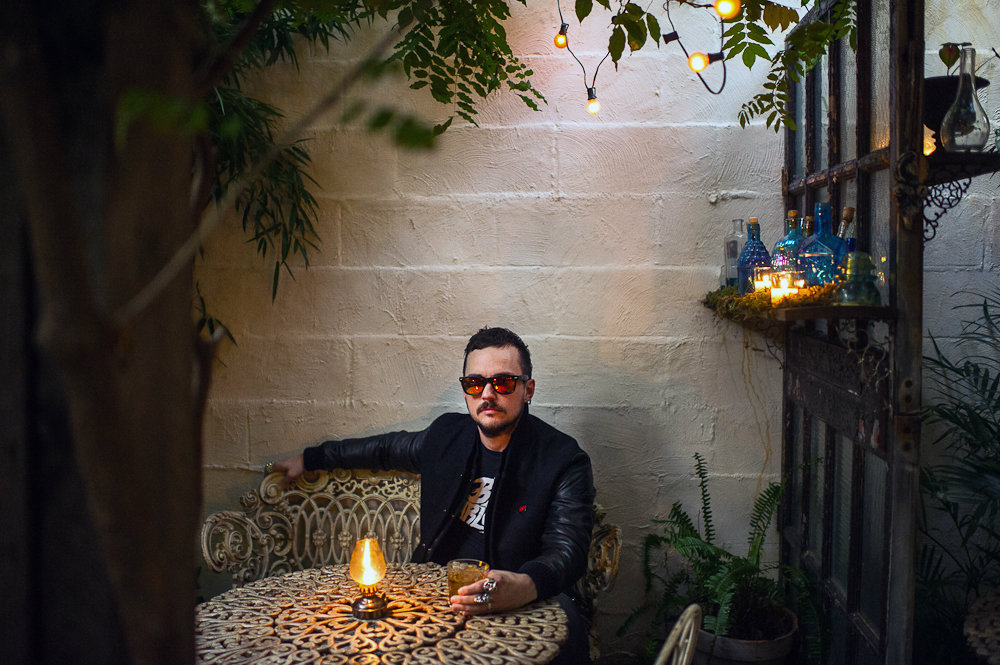 The dubstep and drum and bass superstar Dieselboy (aka Damian Higgins) is extremely into food, and not in the way you would expect from most musicians when they tell you they're into going out to eat. No, Higgins' list of favorites in his home city and across the United States reads as if it might have been put together by someone who does such work for a living. Not to mention he's a chart-topping musician who considers it "name-dropping" to share stories about nights spent with Alex Stupak, Kate Krader, and Jim Meehan. In the following interview, Higgins talks about his stand-out meals, how he manages to fit in so much food on a heavy touring schedule, and how we won't stop nagging Mario Carbone for his grandmother's lasagna recipe.

How'd you get into food?
For a long time when I was traveling around as a DJ, my routine was that I'd get to the hotel, order room service, and then head to the gig. Or maybe I'd eat right next to the hotel. So, it ended up being that every city looked the same. You could feasibly spend a little more time in the city to enjoy what it has to offer, but if you know you're traveling every weekend, you just want to go back home.

But that changed six years ago, when I realized that I could go to a great restaurant before the show and get a feel for the city and have a unique experience. I actually have a giant list of places that I like or that I'd like to try in cities across the country. A lot of DJ friends of mine actually ask me all the time for recommendations. I really do eat all the time, to take advantage of the insane touring schedule. I'm lucky in that my shows don't start until 10 PM, at the earliest, so I can go and have dinner.

What was the last great meal you had?
It was at Empellon Cocina. I'm a big Alex Stupak fan. I went to his other place Taqueria opening night. I was probably the second customer in the door. I went to Cocina maybe two weeks after it opened and I really enjoyed it. I've always loved his food. I was always interested in what he had to say, and I actually got to meet him at a wd-50 friends and family meal a few months ago. I like to support his place. It's really solid Mexican, but with his spin.

How'd you get into wd-50 friends and family?
My wife used to cut Peter Meehan's hair, and through him I got to meet Jim, his brother. One night my wife and I were having dinner in Brooklyn and we ran into Jim and Kate Krader, who ended up being my friend as well. I was at wd-50 with her and the writer Francis Lam. I don't actually know chef Dufresne.

What did you think of the meal?
You know, I liked it. I had always gone in just to have a few drinks and desserts. I thought it was really good, except for one dish that had a liquorice pil-pil. Overall, I was extremely happy being there.

What are your staple spots in New York?
So I'll start with my neighborhood staples: Jason Denton's Betto. It's rustic, it's a little funky, it's delicious. I go there all the time. It's one of those places you go and know the whole staff, so you feel at home. I also go to Traif quite a bit. That place is always very good. The chef there has a fine dining background, so it's a neighborhood restaurant that does mignardises at the end of the meal, which you never see. They do mostly small plates, but also some large format dishes. The food has influences from all over, and it's really enjoyable. Then the other place is Gwynnett Street. They change their menu quite a bit, and for Williamsburg, it's just so beyond — the plating, the ambition. Then I go to Meatball Shop all the time for lunch. It's two blocks from my house and really cheap.

What about outside Brooklyn?
In the city, I'll go to EN Japanese Brasserie a lot. I gotta say that the last time I had a meal that blew me away was when I went to Craft. I happened to go on the night they got the New York Times re-review, and all of the old chefs were there hanging out — Tom Colicchio, David Chang, Damon Wise, etc. I don't know who was cooking in the back, but it was astounding. It was one of the best meals I've ever had. That's always the place I go to when I can spend a bit of money.

What are your favorite places outside of New York?
I'm in L.A. right now, and every time I'm here, I go to Pizzeria Mozza. I went yesterday, and the lasagna special there is ridiculous. They actually just started doing this pizzas that use tomatoes called Bianca di Napoli. They're actually from Chris Bianco, who worked with this guy in Italy to can special tomatoes. You can't buy them unless you're a restaurant. So they do a pizza with tomatoes, oregano, olive oil, and salt. I also like to get the Benno, which is with jalapeño, speck, and pineapple one. But the new one is fucking just ridiculous.

When I'm in Atlanta, I like to go to Linton Hopkins' Holeman & Finch. I never get to try the burgers, since they come out at 10 PM or something like that, which is usually when I'm DJing already. I also go to Fearing's, in Dallas, from Dean Fearing who used to be at the Mansion at Turtle Creek. When I tried it, it sort of reminded me of Bobby Flay, but just more refined. There are the Southwestern and Texas influences in there.

Do you ever eat after your gigs? I imagine your sets don't end until extremely late.
My shows don't end until like 2 or even 5 AM, so I don't tend to eat after. I'm usually stuck going to like a drug store and getting mixed nuts or Muscle Milk or who knows. If I'm super trashed, I'll buy Cheetos or Hostess or something ridiculous. For a long time, all I'd have in my rider was alcohol and water, but I finally got wise and put the stuff I'd usually get after a show on my rider. It's got beef jerky, water, and all sorts of stuff on it. Not very glamorous.

What about great meals abroad?
A lot of the great meals I've had have been in Tokyo, but I don't know the names. I usually play for the same man and his wife, so they just take me to the most insane spots. It's kind of funny, since I'm used to doing lots of research on everywhere I eat.

I play Russia a good amount, since my agent is Russian and books me at all these cities I've never heard. No offense to Russia, but I don't really enjoy the food there. I usually eat this Dannon Activia yogurt when I'm there — tons of it. It's got black cherries in it.

The other thing I remember from abroad is the great eating in South Africa. Most of the time, I'll be in Cape Town with some friends, we'll go to the store, and then cook a ton. That's extremely memorable.

I'm not asking for the best meal of your life, but what's the first thing that pops in your head when someone asks you to share an extremely memorable meal you've had?
I'm not trying to name drop, but the experience was truly wonderful. I've been lucky to meet some people in the food industry, since I'm into food even though I'm just an average guy. But for 4th of July at my house, I had Alex Stupak come over and make Mexican food at my house. His wife Lauren brought ice cream cake. Jim Meehan was there making cocktails. Maks Pazuniak from Counting Room brought punch and sangria. Kate Krader was there, as well as some other my friends. For someone that's into food to have those people there is really special. The food was amazing. I actually made a hot dog with homemade onion jam, Benton's bacon, smoked black pepper cheddar, salt and vinegar potato chips, and a bacon fat bun. And Jim Meehan loved it! That hot dog might get on the PDT menu, apparently. I'm meeting with Jim this week.

Do you give a shit about the music they play in restaurants or do you tune out?
I do give a shit. If the music is terrible, it really does grate on me. What bothers me a lot is what I find in South Beach: that background soundtrack of minimal house music. Every single restaurant seems to have it. That bothers me so much, that they have to play this generic music all over. Personally, I like to listen to indie rock and stuff like that when I'm at home. Or if you're at a reclaimed, Brooklyn-style restaurant with that kind of aesthetic and interior, I tend to like it when they play music that fits that.

Any last words?
Yeah, one last thing: I had this lasagna at Torrisi right when they opened and were doing lunch. It was from Mario Carbone's grandmother. It's honestly mind-blowing. They took it off the menu, and they'll never release that recipe to anyone. It made such an impact on me that I've been trying to get that recipe from them. Let's see what happens.