G9 Chefs Meet in Tokyo, Announce Book on the History of Modern Gastronomy

Share All sharing options for: G9 Chefs Meet in Tokyo, Announce Book on the History of Modern Gastronomy

The main development of the 2012 summit is the news that the Basque Culinary Center and its advisory board will publish a book on the history of modern gastronomy. 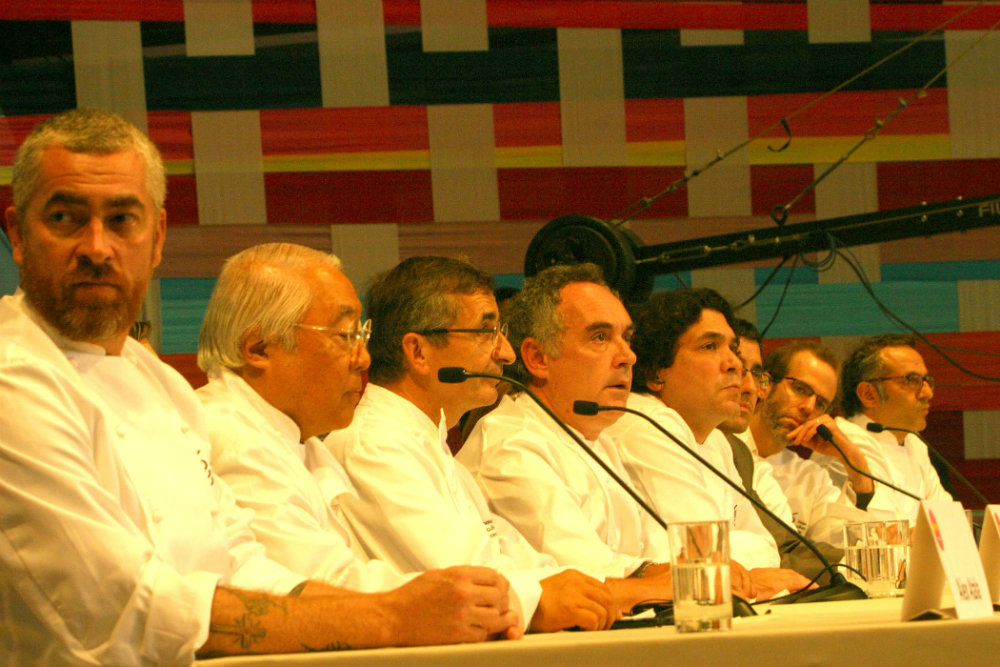 The members convene each year to discuss the future of the Basque Culinary Center, the two-year-old institution in San Sebastián, Spain that offers bachelors and masters degrees in the culinary arts. More than that, though, the advisory board meeting has from the start been a symbolic gathering of some of the world's most visible chefs; it has the expressed aim of evolving the standards of culinary education in a world where — according to the participating members, at least — the role of the chef has fundamentally changed. The event's political resonances are undeniable: the summit takes place in a different city every year, each member represents a different region of the world, and the agenda includes cultural exchanges, visits to historically important sites, and debates that require headsets and multiple translators. Sprinkled in are receptions with dignitaries, as well as ceremonies that attract local and international press. "It's something that's never been done before," said Adrià at several points over the last three days. It is a project that aims to go beyond kitchens, beyond food festivals, beyond congresses.

For that reason and others, not everyone has embraced the group's efforts. Last year's gathering, for example, which took place in Lima, Peru, resulted in the "Open Letter to the Chef's of Tomorrow." That document was a synthesis of each member's main preoccupations, and in general the group's preliminary vision for what the chefs of today and tomorrow should concern themselves with. Produced during the Mistura Festival, an event that attracted tens of thousands of attendees, it was easy for some to peg as self-serving and unspecific. Critic Jay Rayner, writing in the Guardian, characterized it as "a communiqué bigging up [the G9 chefs'] contribution to saving humanity... An act of such self-importance, such ludicrous self-regard, you'd need an oxygen tank to help you get your breath back."

The Trip to Sendai

But over the weekend in Japan, Adrià and the board's efforts continued unabated. The chefs first convened on Saturday morning at Tokyo Station. They were there to take a train to the city of Sendai, in the Miyagi Prefecture, to tour one of the areas devastated by the tsunami that hit the country in March of last year. In the early hours of the day, the G9 members and a small group of press toured part of the coastline, now effectively a vast plot of grass with a few abandoned houses here and there. In the afternoon, the city hosted the visiting chefs at a local hotel, where producers and artisans from the area showcased their wares. There were stands with shiitake mushrooms, sake, and much more. Bottura could be spotted helping himself to multiple cups of the ice cream that the acerola cherry purveyors had prepared for the reception; each time he grabbed a cup, the Modenese chef would ask the stand next to that one to put a bit of wasabi on top of the Japanese gelato he had just discovered. Acurio, for his part, couldn't get enough of the rice and nori.

This wasn't your garden variety tasting. Each purveyor in that windowless banquet hall tried their hardest to get everyone to sample their products, and during the ceremony that took place at the conclusion, the various local officials that spoke urged visitors to return home and spread the word about the area's recovery. "Things are back to normal here," said the prefecture's governor, and "any negative rumors you hear about our products are false." The G9 members then spoke and made it clear that the visit was intended as a show of solidarity. The event concluded with Hattori handing over a check to the city on behalf of the Basque Culinary Center and the visiting chefs.

The real business of the summit kicked off the following morning within a windowless conference room of the Tokyo Dome Hotel. "How do we train the chefs of tomorrow?" was to be the main subject of debate. The first roundtable session, and the only one members of the press were allowed to attend, lasted five hours and dealt mainly with the board's vision for the BCC, and by extension, culinary education around the world. Adrià ran the show here, setting the topics of debate, provoking and sometimes interrupting those gathered around him. His was an endless parade of questions: "Should this be a school of cooking or high cooking?" "What is haute cuisine?" "Where, today, would you send your son to culinary school if you had to pick for him?" "What are the significant changes that the world of gastronomy has experienced in the last fifty years?" Some of those problems were quickly tabled ("What is haute cuisine?"), while others ended up giving way to the main work of the summit.

The conclusion of the board seemed to be that, with a few exceptions, there aren't many schools that train chefs to not only learn the fundamentals, but also to harness the interdisciplinary aspects of their craft. Depending on how far one wishes to take it, that can mean caring about science, about agriculture, about art, about the environment, and perhaps most importantly, about knowing how to manage a business.

The main focus of the discussion, however, quickly became the question of codifying the history of modern gastronomy. According to Adrià, despite the world's increased interest in cooking and the wealth of gastronomic writing out there, there isn't a single place one can find a complete, impartial survey of what's gone on in the last fifty years in cooking. "If it can exist for art history students, why can't young cooks have a similar resource?" asked Adrià. It's actually a problem he's brought up before: in an interview with this site in 2011, Adrià argued that "there are few places where you can go and be taught about Michel Bras in an academic way, and about what Robuchon and Ducasse really signify. Are there any books that really give you a great perspective into American cooking in the last 40 years? Who talks about Girardet? What about Nobu?!" He added, "With that sort of training, it would be a lot easier to reflect on what's happening now, and it would make a lot of cooks have a different vision of things."

"The Conclusions of the Tokyo Meeting" 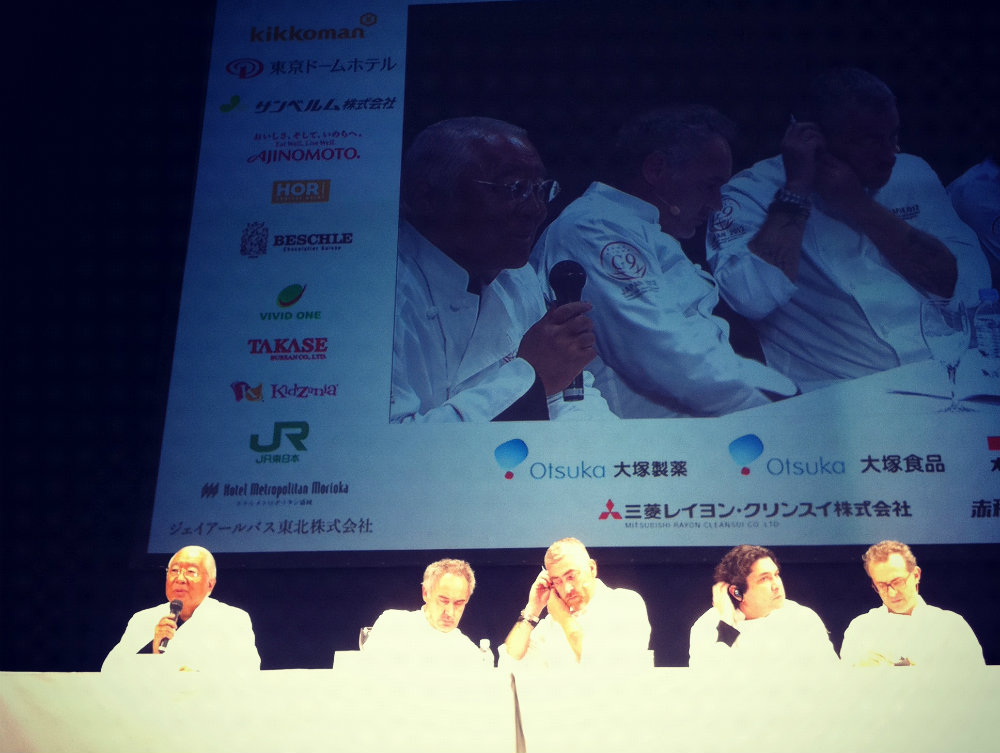 And so came about the key development of the meeting: the BCC and its advisory board will produce a book on the history of modern cooking, beginning with La Nouvelle Cuisine. It is set to be published in 2015, with an online version to post at some point before then. This was originally proposed by Joan Roca during the first meeting of the weekend, and officially announced at the summit's culminating event earlier today at the Tokyo Dome City Hall. The City Hall ceremony was the largest function of the weekend, a four-hour affair linked to the Tokyo Taste congress. There Adrià also announced the rest of "The Conclusions of the Tokyo Meeting," as they ended up calling this year's document.

Among them: in 2013, the summit will take place in New York and in 2014, it will travel to Brazil. From now on, the host chef will be able to invite three additional figures to participate in the meeting, and the advisory board will also seek private funding to develop a technological secretariat. In October, Adrià plans on announcing some changes to the board's lineup: he insists that those who end up leaving will remain honorary members, with the right to participate in any of the meetings. Finally, he announced an exchange program between the BCC and Hattori's nutrition school. That is set to begin next year and will include both students and teachers.

Perhaps in reaction to those who criticized the Lima Letter, the chefs emphasized humility and sharing throughout the weekend. The board has a vision for the chefs of tomorrow, but the members seem to emphasize that each institution, and cook, can take what they want from the ideas the BCC disseminates. And as far as the intentions and merits of the enterprise go, Adrià insists, "If this isn't done seriously, it shouldn't be done at all."