The No Reservations Sydney Episode: Just the One-Liners

Share All sharing options for: The No Reservations Sydney Episode: Just the One-Liners

Another week, another show closer to the Last Episode of No Reservations ever and host Anthony Bourdain's subsequent move to CNN. Last night, Bourdain traveled to Sydney, Australia, where he ate a lot of meat, watched some rugby, and went diving with sharks. (Nurse sharks, which generally don't attack people unless provoked.) And now, on to the Quotable Bourdain — feel free to leave your picks in the comments below. 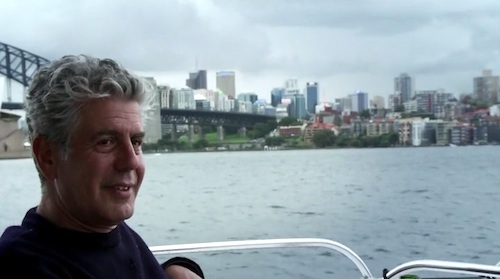 1: On why Australia's great: "That is one of the great things about this country: you can drink in the street like a civilized fucking human being."
2: On how much people love Sydney: "That's sickening, no one really bitches about living in Sydney."
3: On going to a lamb/beef ranch: "For a change, we're not going to show you helpless little Socks getting the good news, then getting strung up and gutted." 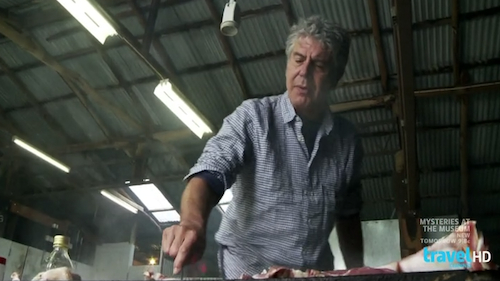 4: On outdoor cooking: "I refused to call it a 'barbie' or whatever they call it around here because it's a grill, not a barbecue."
5: On people who complain that their meat is too fatty: "Oh, no, in a perfect world you'd be beaten to death where you stand."
6: On hipsters' world domination: "I give up, I surrender. The hipsters have won. They're everywhere now, let's face it." 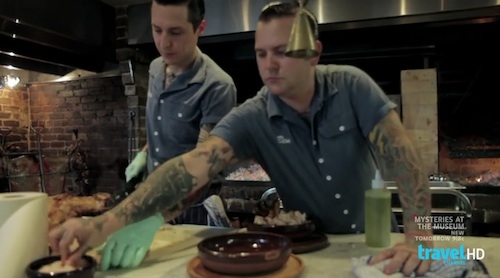 7: On Ben Milgate and Elvis Abrahanowicz, chefs at Sydney's Porteno: "If you want to dress up like Duane Eddy, spend two and a half hours on your hair, as long as you make food as good as these guys, go in peace. In fact, I support your alternate lifestyle and will fight to defend it."
8: On not being offered a menu at Porteno: "I get the idea. They seem to be exposing large parts of animals to flame. I would like those."
9: Anthony Bourdain, trendwatcher: "It's all these young chefs saying fuck it, I'm going throw a lot of really good shit on a board."
10: On crackly pig skin: "The sound alone is arousing me." 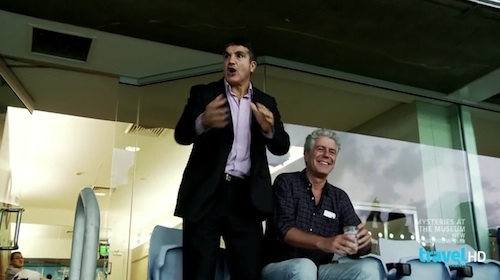 11: On rugby: "We would never let American kids play this game without six tons of protective gear. We can't have our little angels hurt themselves."
12: On losing rugby: "Somewhere, Russell Crowe is crying." 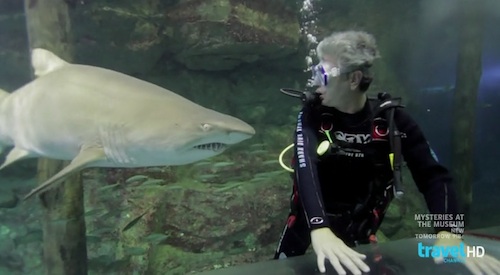 13: On swimming with sharks: "They come looming right up on you, right up in your face, and it's hard to disabuse yourself of the notion that at any minute?one of these beasts won't get all busy chomping away on my soft parts."
14: On a seafood dish: "It emerges from a thick cloud of dry ice, like Zeppelin at the Garden, 1975." 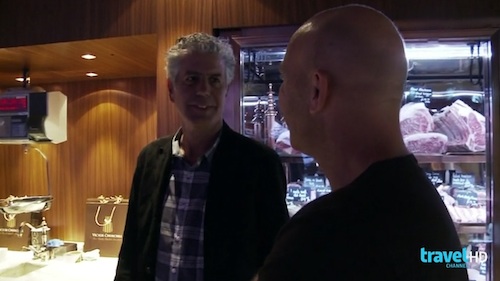 15: On butcher shop Victor Churchill: "This is the most beautiful butcher shop in the world, right?"
16: On simple pleasures: "Daytime drinking is really underrated." 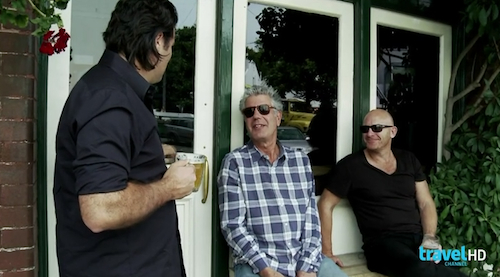