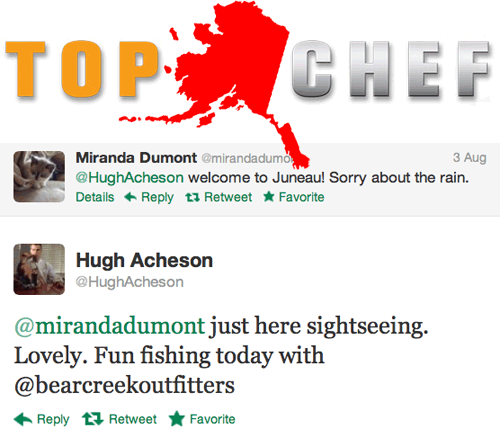 Did you know that Eskimos have 400 different words for faux hawk? It appears as though Top Chef season ten decamped from Seattle (see previous rumormongering here, here, here, and here) and is now possibly shooting the finale in the sunny state of Alaska. A bunch of people on Twitter have spotted host Padma Lakshmi, Tom Colicchio, and Hugh Acheson in Juneau. Acheson played it cool and said he was "just here sightseeing." Nice try, buddy. As is Top Chef tradition, the bulk of the season is shot in one city (or state), and then the finale is filmed elsewhere. So Seattle >> Alaska?

KTOO News has photo evidence and a writeup about a Top Chef shoot last Thursday at Tracy' Crab Shack in Juneau, a "waterfront eatery known for its award-winning bisque." A Harbormaster told KTOO that "the production company brought about 150 people into town and unloaded a bunch of stuff from one of the cruise ships this week."

The show also wanted to use the city's harbor facilities (for fishing?) and the "the production company's early plans included a cooking competition at a local high school with food sampled by local fishermen." Camera crews have been spotted in a grocery store and residents have reported "stars of the show hitting the downtown bars and restaurants this week." Host Padma Lakshmi was said to have been "shushing" everyone in Seattle, now it's time for all the good people in Alaska to be shushed, too.

Update: More rumormongering: Top Chef contestants and crew apparently took a cruise ship to Alaska and filmed an episode on the way there.