Paul Qui on His Epic Plans For Three Austin Restaurants

Share All sharing options for: Paul Qui on His Epic Plans For Three Austin Restaurants 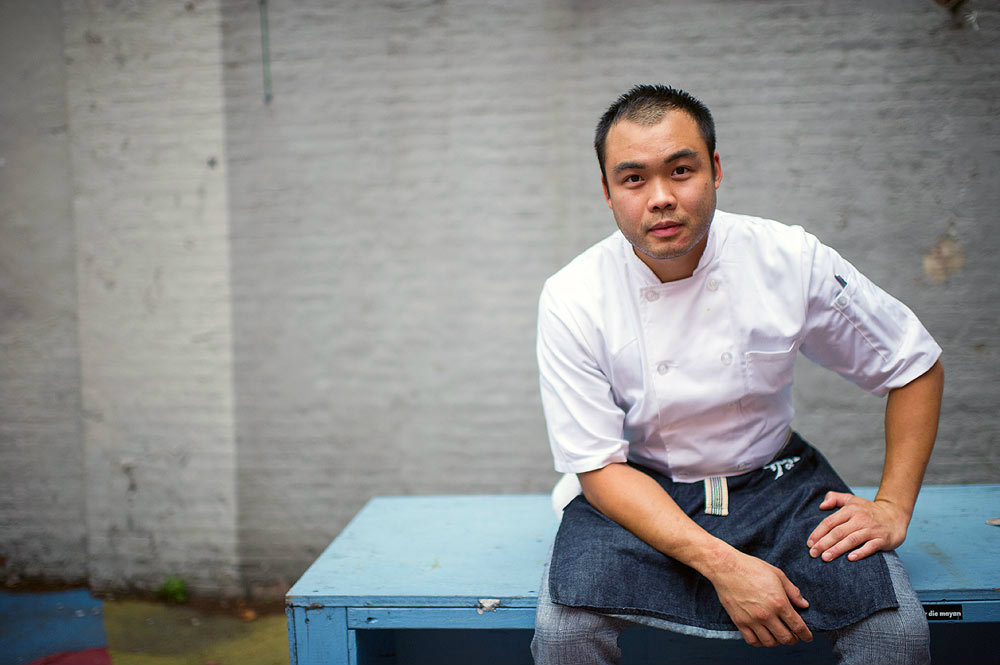 Austin's Paul Qui, who this year has won both a James Beard Award and the most recent season of Top Chef, came to New York last week to cook a series of dinners at the CityGrit space in NoLita. After having spent much of the last few months traveling and planning solo projects, Qui spoke candidly — and probably very quickly — to a couple of media outlets about the many, many things he has in the works. People got confused. For one, his flagship restaurant will be on East 6th Street and not South Lamar, as previously reported.

To clear up the whole affair, Qui took time out of his prep schedule to walk through what he currently has planned in Austin: an unnamed flagship restaurant with a 50-seat room and a separate space offering a tasting menu, two new East Side King restaurants, and a consulting arrangement with Uchiko.

There seems to be a bit of confusion about what you have in works.
Yeah! I must have been talking really fast and running back to the kitchen. Or I might have been nervous when I was speaking.

Can you walk me through what you've got planned?
So basically, I've been working on a restaurant on East 6th Street, in Austin.

That is the flagship Paul Qui restaurant?
That's the flagship, yes. I traveled a bit, got a little more inspired, and now I'm thinking I'm going to refine what I was originally going to do. The East 6th location is going to be my restaurant. It's like 74 seats total.

Do you have a name or a date in mind?
No name, no date yet. We were hoping to be open by November, but that was before I decided to change a few things.

So now I'm going to talk it through with you to define what I want to do now: I'm thinking that apart from the fifty-seat room, I'm going to have a 12-seat bar where guests can see the action and have the first bites of tasting menu experience. It's going to be sushi bar-style, but not a sushi bar. Then I'll move the guests to my library, where I come up with all the ideas with my team, and finish off the dinner there.

Carlo from Roberta's just opened Blanca, and they only serve dinner there when he is in town and working. Do you envision something similar to that?
It will be very similar to that. It's probably going to have zero reservations in the fifty seat room, and only reservations at the more intimate space. The two businesses will share the same kitchen and location.

Any ideas about the food?
For the fifty-seat space, I have a pretty good idea of what the menu's going to be. It's probably 12-14 items, more family-oriented, with whatever I can get in Texas.

For the tasting space. It's composed dishes and composed bites. I'm having trouble defining what it is, because I don't want to say it's kaiseki, tapas, or sushi.

It sounds like it's just going to be whatever you want.
Yeah, pretty much. Part of the pursuit of sushi is going for that perfect bite — or two bites — and that's what inspires me. I'm drawn to the interaction and instant gratification of having the people eat my food right away. I think I'm going to figure it out as I go along and as we build. I guess I'm a bit ADD.

What were the places your traveled to and restaurants you tried that really floored you?
I really loved Ryugin in Tokyo. A lot of what I've eaten this year has floored me. I had a great time at Dinner in London, Noma in Copenhagen, seeing Jiro in action in Tokyo. I'm going to Spain on Sunday. I'm going to hit up Extebarri, Mugaritz, and Arzak. I'm also going to Madrid and Bilbao.

We also acquired a space on South Lamar, and that's going to be an East Side King, as well.

Then I acquired a deal with Hole In The Wall, and I might do one there.

Like what?
Champon noodles and yaki udon. It's pretty much a full kitchen, so I'm excited about that.

What are some of the projected dates on these?
The South Lamar one is about six to eight months out. The one on campus is going to start out with the original Liberty menu, with the intention of mixing it up after I get a few guys and can grow it.

And do you have a food truck?
Sometimes there's a truck, when there's SXSW or something like that. Nothing consistent, though.

Are there plans for a consistent food truck?
No no.

You're still also consulting at Uchiko?
I'm doing that as well. For the most part, I just go over there for a week at a time, cook with the chefs, and say hello the guests.

Do you plan to keep doing that?
I plan on stopping it when my restaurant is closer to completion. It's currently under construction.

Finally, let's talk about what it's like to make the leap and do your own thing. Approach it from any angle you like.
I love Tyson [Cole], and his restaurant is the only restaurant I'd ever worked for. I was there for nine years. But even before Top Chef, I realized I needed to go out there and do my own thing. While I was on the show, it gave me a ton of time to think about what I wanted to do. That's what I was thinking about the most. I can't complain about all the press.

And you've also had the liberty of time and travel.
Absolutely. That money has given me the chance to go travel, enjoy, and learn.

And why stick to Austin?
I just love it. I don't want to say that I want to make it better, but I just think there's a lot of potential. There's a lot of people trying new things.

Does it ever feel like things could fall apart?
It might, but fuck it. You have to do it. The smarter thing might have been to open a bigger restaurant, make a little more money, and chill out. But right now, I'm going to keep on rolling the dice. I can't sit still, man.

It sounds like you're trying to become a chef in the big sense of the word — overseeing, expanding, and building talent.
I love making food, but I also love working with people and mentoring and cultivating relationships. That's why I love working in kitchens.