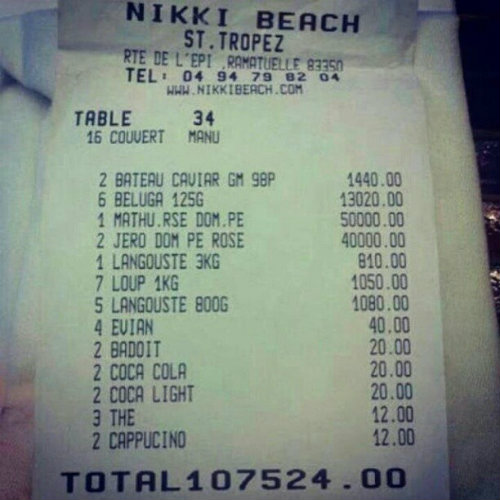 Courtesy of Rich Kids of Instagram, the Tumblr that compiles photos of rich young people doing rich people things all over the world, comes this receipt from the St. Tropez outpost of Nikki Beach, the chain of beach clubs with locations in Miami, Marbella, Marbella, Cabo, and several other rich people places. The tab amounts to 107,524 Euro, which is about $132,000 dollars. The user who posted the photo employs several hashtags to accompany the shot, including #redbull, #dom, and #caviar — the rich-kid-club-rat trinity.

A closer look at the receipt reveals that the party of sixteen went through, among a few other things, eight orders of caviar (14,500 Euro), eight orders of shellfish (1,860 Euro), 1 Methuselah and 2 Jeroboams of Dom (90,000 Euro), and to finish it off, two cappuccinos (12 Euro). Makes the group of 15 Olympic officials who spent $69,000 on lunch seem pretty tame. Who knows if this thing is real, but man, we sure hope so.

Of the whole receipt/rich kid/Dom phenomenon, CNBC writes, "Dom Perignon features prominently throughout: being poured on heads, being poured into a spaghetti sauce and being paired with a hot dog (and girl with bikini) 'at poolside.' The site might as well be called “Dom Gone Wild” (since bikinis also feature prominently)."